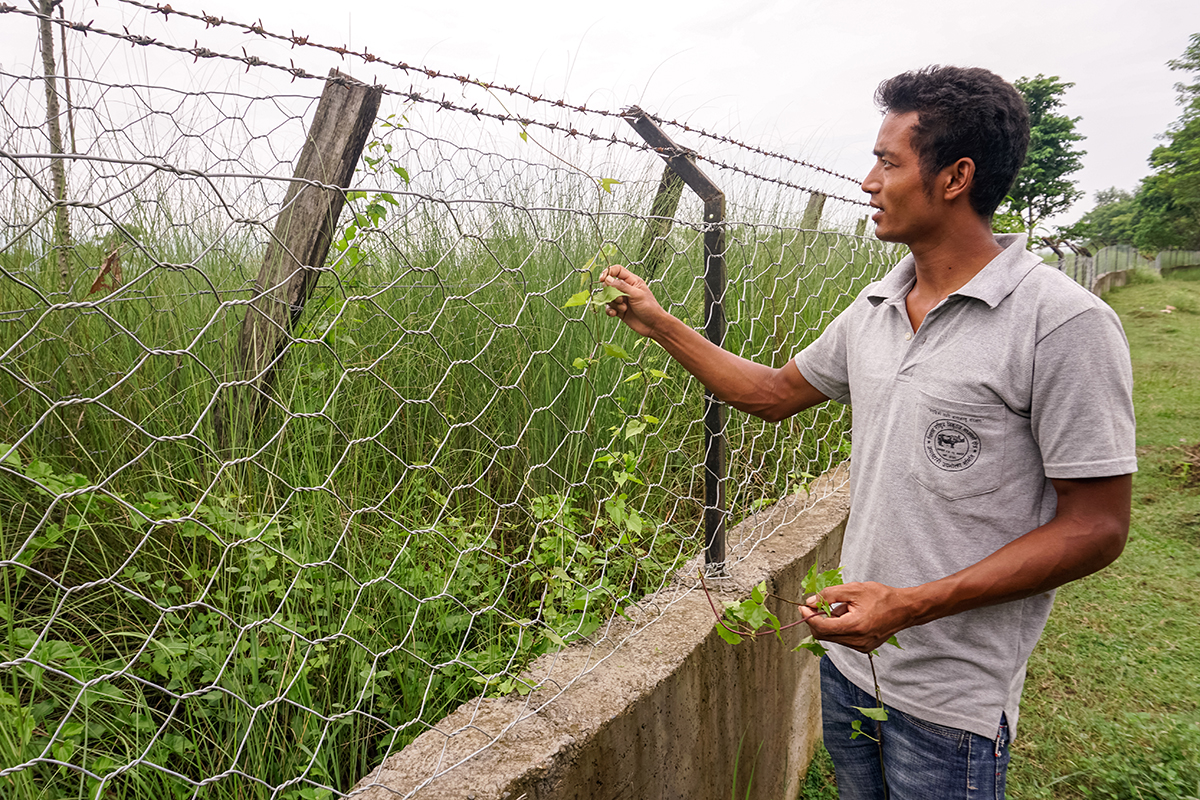 AMALTARI BUFFER ZONE, NEPAL – Bal Kumari Mahatwo, 34, sells everything from hand cream to biscuits at the general store in her village. She is also a tailor who makes bamboo handicrafts in her spare time.

But even with all of those duties, Mahatwo also finds time once a week for a potentially dangerous pursuit.

She and several other volunteers spend three to five hours patrolling an area called a buffer zone of the Chitwan National Park, a wildlife reserve and Nepal’s first national park, near Nepal’s southern border. She’s patrolling to prevent poachers from hunting wild animals, including rhinos and tigers, and to rescue wild animals that have wandered into nearby villages.

Mahatwo says she is now a senior member of the Community-Based Anti-Poaching Unit in Amaltari, a village bordering the park. She became a member of the unit, established in 2015, to help combat the loss of endangered wildlife. The unit has 287 volunteers between 16 to 40 years of age. 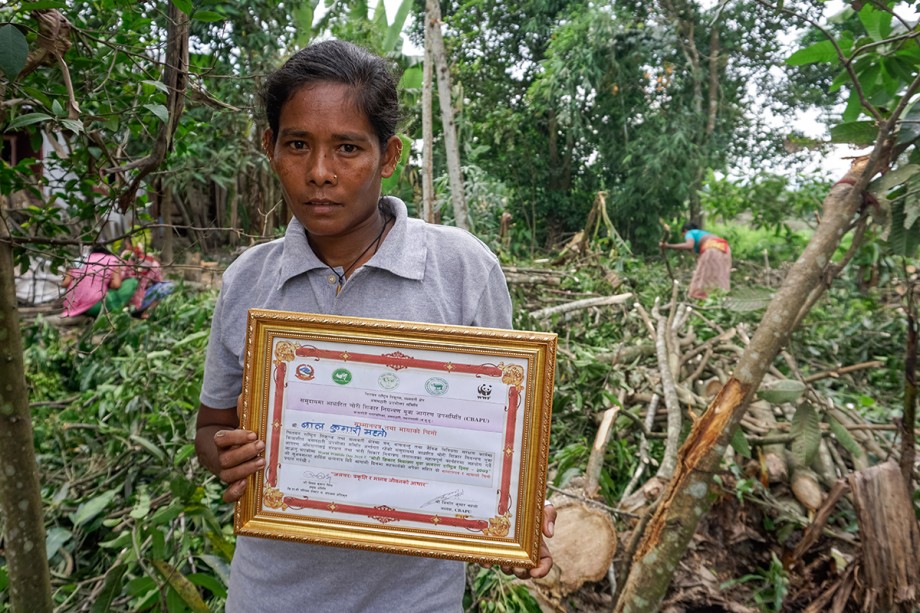 Bal Kumari Mahatwo, 34, shows off the certificate that she received after completing a training with a community-based anti-poaching unit.

But Nepal is one of the few places on earth making dramatic improvements in growing its wild tiger population. (Nepal does not breed tigers.) Thanks to cooperation and coordination between the Nepalese government, the army and buffer zone communities like the one in Amaltari, the population of tigers in Nepal has almost doubled between 2009 and 2018.

Much of this increased effort occurred following the 2010 Tiger Summit held in St. Petersburg, Russia. Nepal joined 12 other tiger range countries in pledging to double their tiger populations by 2022. India and Bhutan have also been successful at increasing their wild tiger populations in this time period.

Kishor Kumar Mahatwo (not related to Bal Kumari Mahatwo), president of the Amaltari unit, says that at first, it was difficult to educate the community about wildlife conservation because farmers only focused on wildlife eating their crops. But the rise in tourism in the area has bolstered awareness around conservation of local wildlife.

“Before the community was only focused on farming. Now tourism has increased, and the hospitality business has increased, too. Now people work in hotels and restaurants,” he says. “People now understand that they can benefit from the wild animals. These animals have become a source of income.” 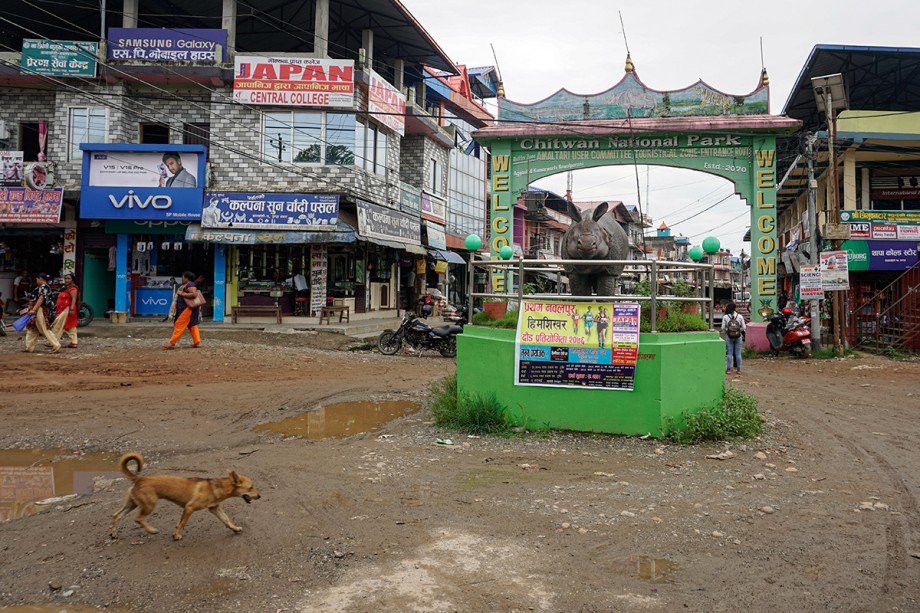 One of the entrances to Chitwan National Park is accessible via Amaltari village, a buffer zone next to the park.

As much as 50% of the revenue generated from the parks is allocated to the buffer zones to be utilized in conservation, education and other community development priorities.

That’s why Bal Kumari Mahatwo finds time in her busy schedule to volunteer.

“I joined the group to conserve our wildlife. By doing so our youth don’t have to migrate to foreign countries for work,” she says. “They can work here and earn money from the tourists who come to see our tigers and rhinos.”

“The government alone cannot succeed in the conservation of wildlife. They need the help of local communities,” says Dhani Ram Gurau, a member of the Amaltari Buffer Zone User Committee. “That is why they established buffer zones.”

There are 13 buffer zones in Nepal, which are monitored by 611 community-based anti-poaching units that monitor other areas too. There are also 25 district level wildlife crime control bureaus coordination committees, says Bishnu Prasad Shrestha, under secretary and information officer at the Department of National Parks and Wildlife Conservation.

As Bal Kumari Mahatwo walks briskly through the Chitwan buffer zone, she leads a six-person team to the edge of the nearby Narayani River, carefully perusing the riverbanks before retracing her steps.

“Whatever is there in the jungle should remain there. We have to protect our national park and everything in it,” she says. The army patrols the core area of the national park, and sometimes Mahatwo’s crew joins them. “If we notice any suspicious behavior we inform the army. We have to support the army.” 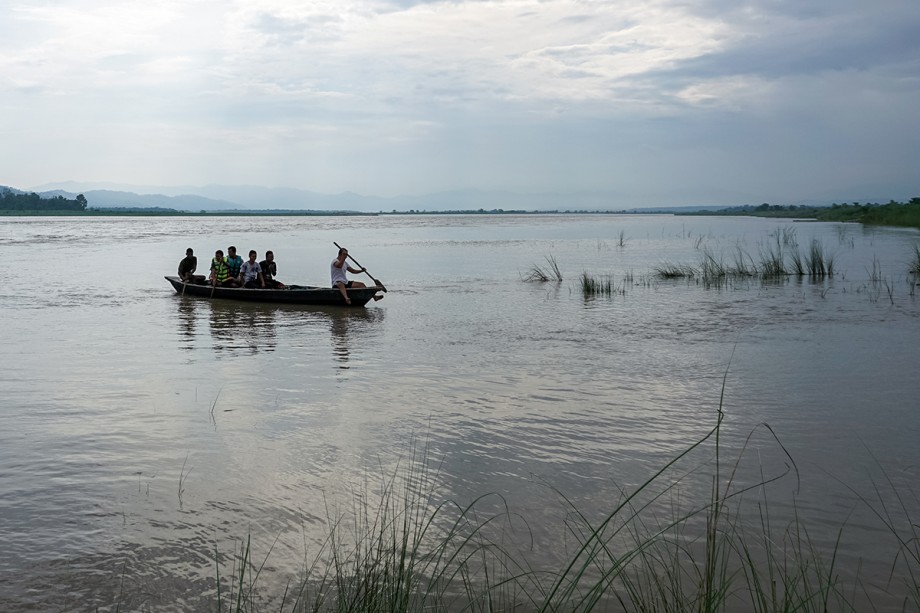 A group of army men cross the Narayani river. The army patrols the national park to prevent poaching and activity by a suspected international poaching ring.

Citizen and army-led patrols also help to prevent conflict between nearby residents and wildlife.

There have been 30 human deaths due to contact with wildlife in Nepal in the 2018-2019 fiscal year, and four were caused by tigers, confirms Gopal Bahadur Ghimire, assistant conservation officer at Chitwan National Park. Families of people killed by wildlife receive a government benefit of one million Nepalese rupees ($8,678.14). The government also covers the full cost of treatment for anyone injured by an animal, provided they are treated in a government hospital.

“To minimize human-wildlife conflict, we have put wires around the perimeter,” he says, referring to the mesh wiring and solar-electric fences.

Those wires have been helpful in keeping tigers out, says Lal Singh Mahatwo, a 79-year-old farmer. (Mahatwo is a common caste-based last name in the area.)

He says that there are challenges that come from living so close to the park. For example, the gate between the park and the buffer zone is sometimes left open, which causes problems for farmers.

“Rhinos, wild boar and deer come to eat our crops and vegetables. There should be a gatekeeper,” he says.

But living near the park comes with responsibilities too, he says. And villagers are learning to adapt.

“We don’t kill the animals. We return them to the park,” he says.

Lok Ram Gurau, another local farmer, agrees. He says that animals used to eat his crops, too. But recent community efforts have helped.

“After the fences and wires were built around the buffer zone the problem has decreased,” he says. 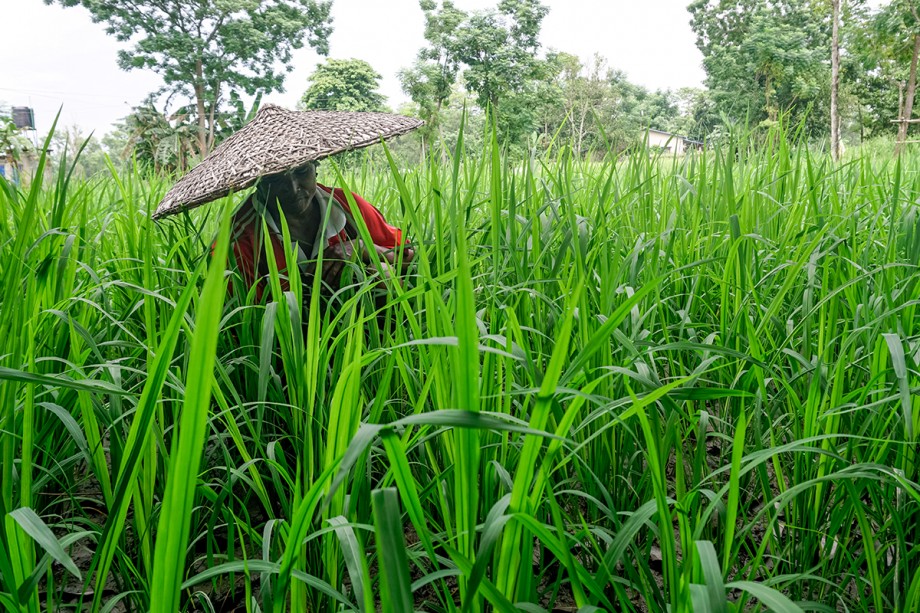 Lok Ram Gurau, 52, works in his fields. He lives in one of Nepal’s 13 buffer zones, or areas that surround wildlife conservation areas.

And the community is beginning to understand the value of living so close to the park.

“If there is no wildlife in the park then tourists won’t come. We are benefitting from the wildlife,” Gurau says.

Kishor Kumar Mahatwo of the Amaltari community anti-poaching unit says that young people in the community have become especially active in wildlife preservation. One of the units formed a Rapid Response Team that quickly alerts villagers when a wild animal enters the village.

A few years ago, when a tiger entered a local school at night, he says a big crowd had gathered by morning.

“We contacted the authorities, who tranquilized the tiger and returned it to the park. We also controlled the crowd that had gathered to see the tiger,” he says.

And community members are always on the lookout for poachers.

“When we see suspicious people we follow them,” Kishor Kumar Mahatwo says. “We followed a person who was driving continuously in the buffer zone. We caught him with a poached barking deer and handed him over to the authorities.”

Community assistance has helped decrease poaching, which is a complex problem, says Man Bahadur Khadka, former director general, Department of National Parks and Wildlife Conservation at the Ministry of Forests and Environment. His last day in the role was September 19.

“Before, investigation was just done by park staff. Now we hand over serious cases to Central Investigation Bureau of Police. They are more advanced in their investigation,” he says.

Khadka says officials here believe members of an international ring are operating in Nepal, but so far they’ve been difficult to catch.

“The challenge is poaching. We need to continue to improve our technologies,” he says. “We have to be ahead of the poachers and wildlife traders every time.”