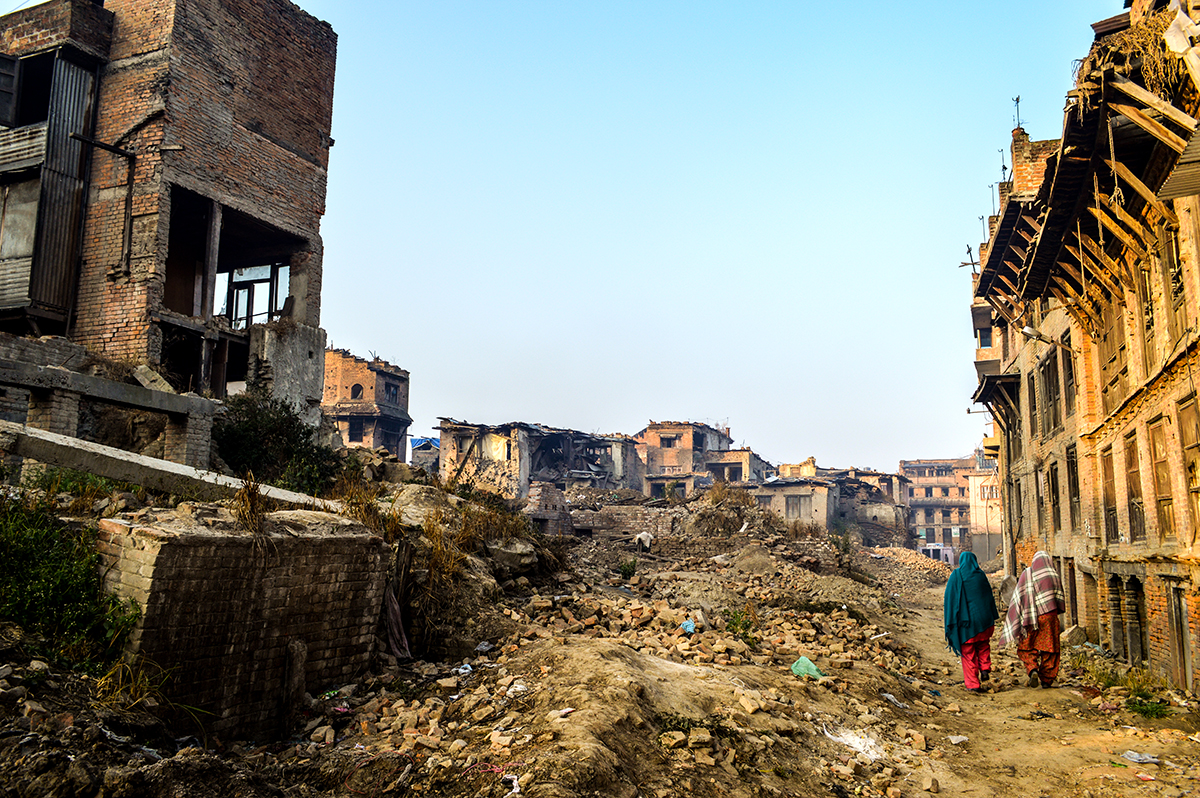 BHAKTAPUR, NEPAL  ̶   When the earthquake struck Nepal in April 2015, it happened suddenly and without warning, says Samriddhi Prajapati.

Prajapati, 20, was on the second floor of the four-story building where she lived with her mother in the Kathmandu Valley, when the earth shook and the house swayed, she says. Within minutes, the floor collapsed beneath them and they were trapped between rubble from the upper floors and the ground floor.

“We were between life and death,” Prajapati says. “I thought the gas would explode and we would die. I crawled to a hole and screamed for help.”

I realized I had to do something. Laxmi Sundar Gainju, 27

Prajapati screamed as loud as she could, she says, but felt her voice was drowned out by other voices, which were also screaming and shouting. After what felt like hours, but what was likely less than 60 minutes, Prajapati heard voices calling out to her. She knew then she would be rescued.

“A girl was screaming and asking for help,” Gainju says. “I could make out that her voice was coming from a small hole in the house.” 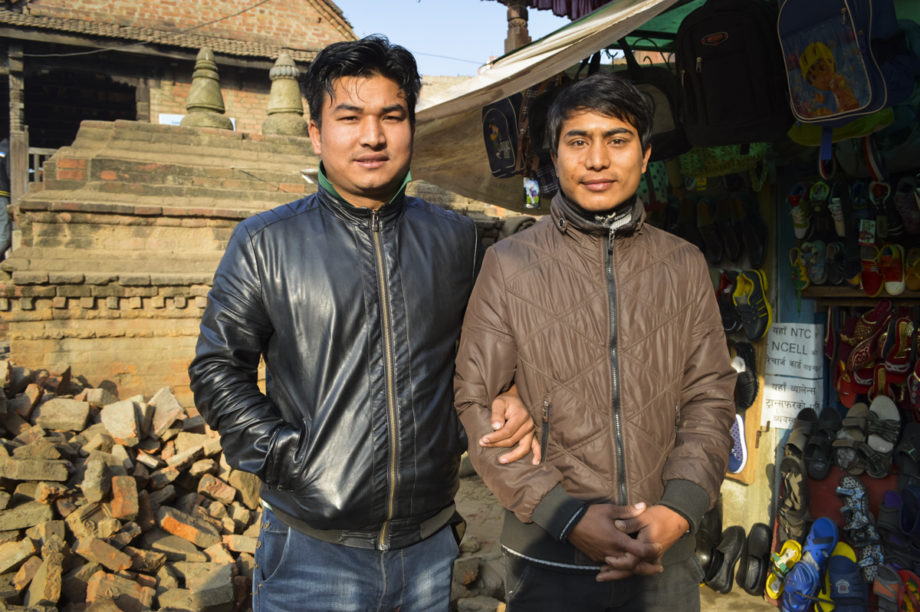 Laxmi Sundar Gainju, left, and Krishna Ram Prajapati stand outside Prajapati’s family shop in Bhaktapur. Gainju rescued Prajapati, who was trapped inside his house after the April 25, 2015 earthquake.

Prajapati’s screams drew a crowd, but no one took any action. So Gainju found a wood plank and climbed to where the mother and daughter lay trapped between concrete bricks and pillars. The crowd watched as he carefully pulled the mother, and then the daughter, to safety.

“After saving them I was confident that I could save more people,” Gainju says.

Immediately after the April 25, 2015 earthquake, Gainju rescued many people trapped in his neighborhood. He was saving lives before official rescue teams arrived, his neighbors say. Many people joined the effort after watching him pull others from the rubble.

Neighbors hail Gainju as a hero.

After the initial rescue effort, Gainju helped with relief distribution. Today, he still connects families in need with donors.

Around 22,300 people were injured in the quake, according to the government’s Post Disaster Needs Assessment report, and the World Bank estimates that nearly 9,000 people died in the quake and its aftershocks.

Nearly half a million houses were completely destroyed, and more than 250,000 homes were partially damaged, according to the report.

Gainju spent the first four days after the earthquake combing through rubble in his neighborhood, looking for survivors, he says. 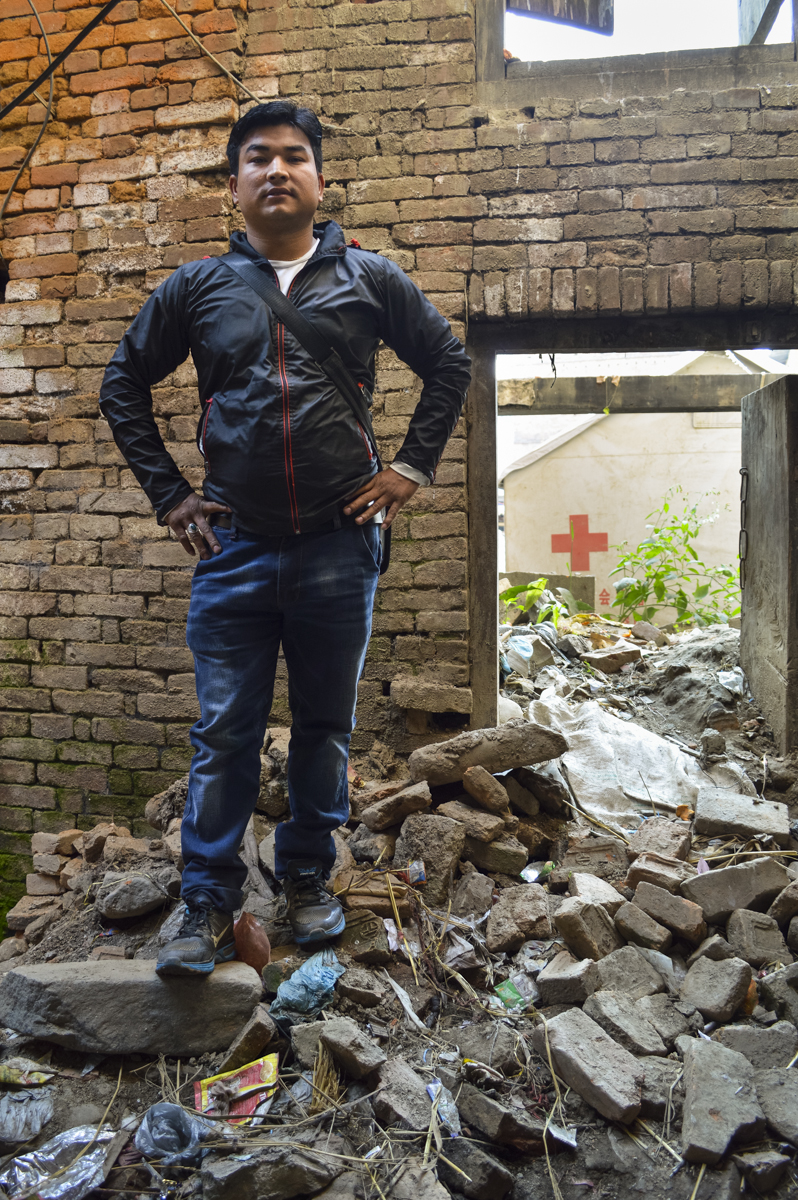 Laxmi Sundar Gainju stands outside his earthquake-damaged house in Bhaktapur. It hasn’t been rebuilt because he and his family don’t have enough money.

“I realized I had to do something,” Gainju says.

Krishna Ram Prajapati, 25, was trapped on the ground floor of his house after the earthquake.

“I tried to wriggle out,” he says. “I thought my life had ended and I was going to die.”

Too weak to shout for help, he was wedged in the rubble and unable to push himself out, Krishna Ram Prajapati says.

Not knowing he was trapped under a thin layer of rubble, rescuers walked over him, crushing the bricks and stones further onto his body and injuring his head.

“Dai first saved my head and slowly helped me out of the rubble,” Krishna Ram Prajapati says.

“Sometimes we would hear that he is rescuing people alone,” Laxmi Prasad Gainju says. “That worried us.”

But Laxmi Sundar Gainju did not often work alone.

People saw him working tirelessly to rescue people and dig through the rubble, and they followed his actions, says Umesh Sainju.

“He was holding the body of a small child when I saw him,” Sainju, 36, says. “His body was covered in dust and blood.” 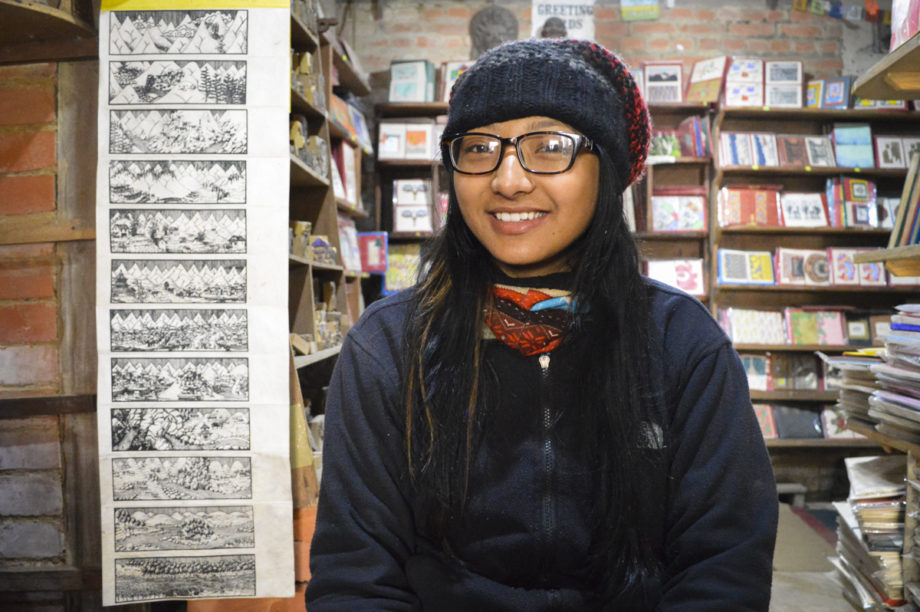 Samriddhi Prajapati, a student, sometimes helps in her family’s paper products store and factory in Bhaktapur. Prajapati and her mother, who were trapped inside their house, were the first people that Laxmi Sundar Gainju rescued after the earthquake.

Sainju says he felt inspired to join the rescue.

“I felt like helping when I saw Laxmi and others joined to help too,” Sainju says. “He has leadership qualities and he made us help others in need.”

After about four days, the rescue crew stopped finding survivors. The next week was spent retrieving dead bodies and clearing the rubble, Sainju says.

Purna Ram Lakha, secretary of the Bhaktapur municipality ward where Laxmi Sundar Gainju’s neighborhood is located, says the man should be praised.

“We are thankful to people like him,” Lakha says. “If they had not helped, then maybe more people would have died.”

Around 20 people in Wards 1, 2 and 3 of Bhaktapur municipality were killed in the quake, Lakha says.

“We were so worried,” says Laxmi Gainju. “I would cry thinking my son would die too.”

Laxmi Sundar Gainju, a salesman at a marketing firm, lives with his wife as well as his parents and brother’s family. His parents are farmers.

“When I go out people tell me that ‘Your son saved so and so’s life,’” he says. “I feel very proud.”

Laxmi Prasad Gainju says he’s not surprised his neighbors hail his brother as a hero.

“He was always brave,” Laxmi Prasad Gainju says. “He always wanted to do something.”

Offers to help earthquake-affected people in the area poured in after people saw Gainju interviewed on Nepal Mandal, a local TV station.

Gainju says he identified the neediest people in his community and linked them to donor organizations and individuals who wanted to help.

“I help as much as I can,” Gainju says. “Financially I cannot, but I do everything in my capacity.”

Chandeswori Bhainatwo, 28, says she lost her home and all her possessions in the earthquake.

She also had to look after her elderly parents, Bhainatwo says.

Gainju introduced her to donor organizations and others who visited the neighborhood to distribute relief. Through them, she received 150,000 Nepalese rupees ($1,397) to construct a temporary shelter, where they still live.

“Everyone is suffering and Laxmi Dai helped those who are badly in need of help,” Bhainatwo says.

In July, Gainju received a certificate of appreciation for his courage and bravery from the Rotary Club of Bhaktapur.

Gainju says he sometimes can’t believe that the events of the past year actually took place.

“When I think about what I have done, I feel shocked myself. Did I really do all this?” Gainju says. “I did everything I could in my capacity.”