Skip to main content
The story you are reading was published on Monday July 27, 2015. To read more recent stories click here. 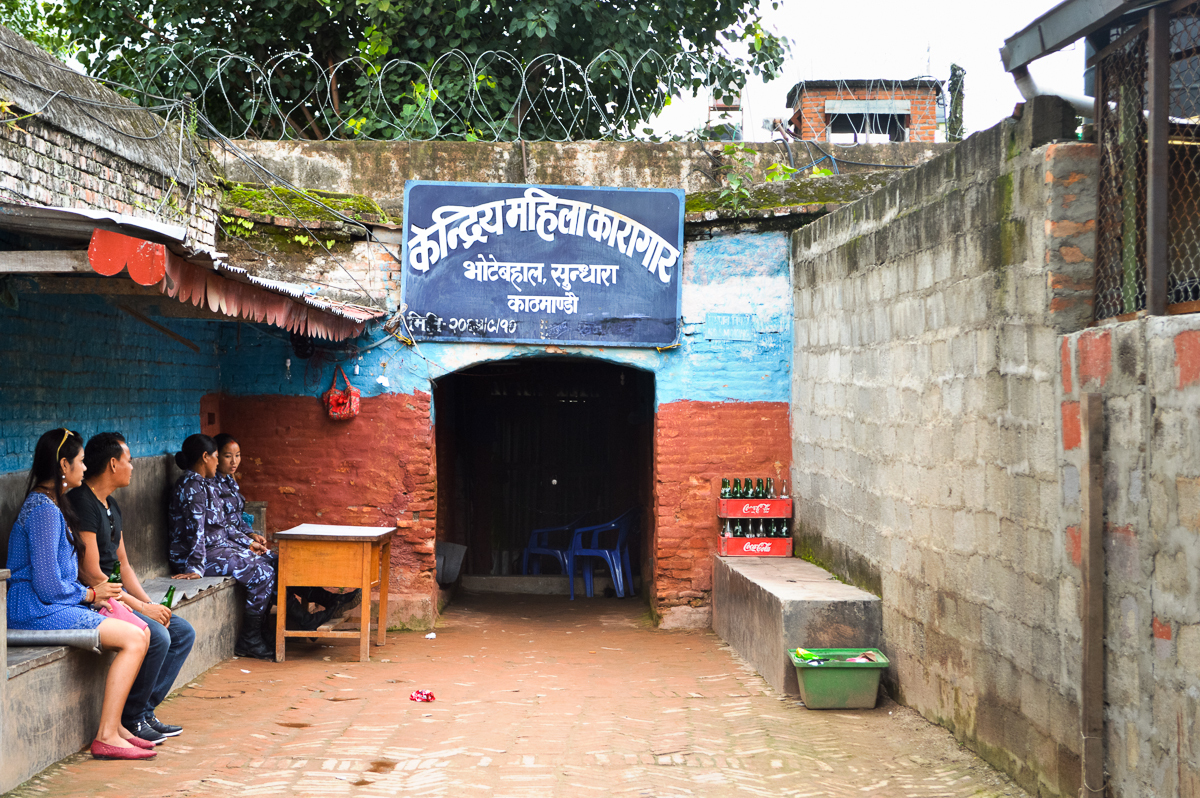 KATHMANDU, NEPAL — Kumar Gajmer, 22, and Ganesh Gajmer, 17, stand at a gate near a yellow wall topped with barbed wire. An armed guard inspects their visiting passes.

The brothers step through the gate into an open courtyard, then turn toward the dilapidated building that has been their mother’s home for eight years: Bhadra Mahila Bandi Griha, the Women’s Central Jail.

Tara Gajmer, 40, was convicted in 2007 of selling heroin and sentenced to 15 years at this prison.

The brothers know this place. Children under the age of 16 may live with their imprisoned mothers, as Ganesh Gajmer did when he was young and, later, during school holidays. Tara Gajmer’s four children take turns visiting her every week or two, traveling 30 to 45 minutes from Kapan in Kathmandu’s northeast section, where they live with their father.

The building’s meeting area is narrow, and separated by bars. From either side of the bars, Tara Gajmer and her sons speak in low voices.

The brothers are concerned about their mother’s safety. Two major earthquakes, which struck Nepal on April 25 and May 12, and hundreds of subsequent aftershocks have severely damaged prison buildings. Large cracks in walls and ceilings are evident even in the visiting area.

It is a crime against humanity to leave people in such appalling conditions, even though they are tagged as criminals. — Indira Ranamagar, founder, Prisoners Assistance Nepal

“I have lived inside here when I was small,” Ganesh Gajmer says. “I know how old and poor the infrastructure is.”

Tara Gajmer assures her sons she is all right. For safety’s sake, she and other inmates sleep in tents outside the crumbling prison building.

“The building trembles even while walking, which is very scary,” Tara Gajmer says.

The brothers could not reach their mother immediately after the April quake, the larger of the two. A week later, a guard allowed Tara Gajmer to call them on his mobile phone. It was 15 days before the brothers were allowed to visit her.

“We were very scared for her,” Kumar Gajmer says.

“We do not want our mother to die in an accident,” Ganesh Gajmer says.

The seismic activity has destabilized buildings at Kathmandu Central Jail, the complex that includes the women’s jail. A building at one of the two prisons that house male prisoners collapsed in the April earthquake, killing 16 inmates and injuring another 74.

Government officials say renovations are underway, but prisoners and their advocates say the government is neglecting inmates’ safety.

The three prisons that make up Kathmandu Central Jail are located near each other. Central Jail and Bhadra Bandi Griha house male prisoners; Women’s Central Jail is the only women’s prison in Kathmandu.

All of the stone and clay buildings in the prison complex were constructed in 1914, says Murari Wasti, undersecretary of the Local Administration Section of the Ministry of Home Affairs.

Nepal has about 17,200 prisoners, according to the Ministry of Home Affairs. About 1,200 are women. Forty of Nepal’s 74 prisons were damaged in the quakes, Wasti says.

About 200 inmates escaped from Nepalese prisons after the larger of the two quakes struck on April 25, Wasti says. The Ministry of Home Affairs placed ads in local newspapers calling on the escapees to contact local police to avoid being sentenced to additional prison time for escape. But only five fugitives in Sindhupalchowk district contacted police by the end of June.

The Ministry of Home Affairs this year granted amnesty to about 560 prisoners, releasing them on Republic Day, May 29. Prisoners convicted of minor offenses are released every year as part of the national celebration, but the ministry released more prisoners than usual this year to ease crowding in the wake of the quakes.

“We cannot sleep at night because of the fear of being buried under the rubble of these old buildings,” says Sarita Shrestha, 31, a Women’s Central Jail inmate serving a five-year prison term for selling heroin. 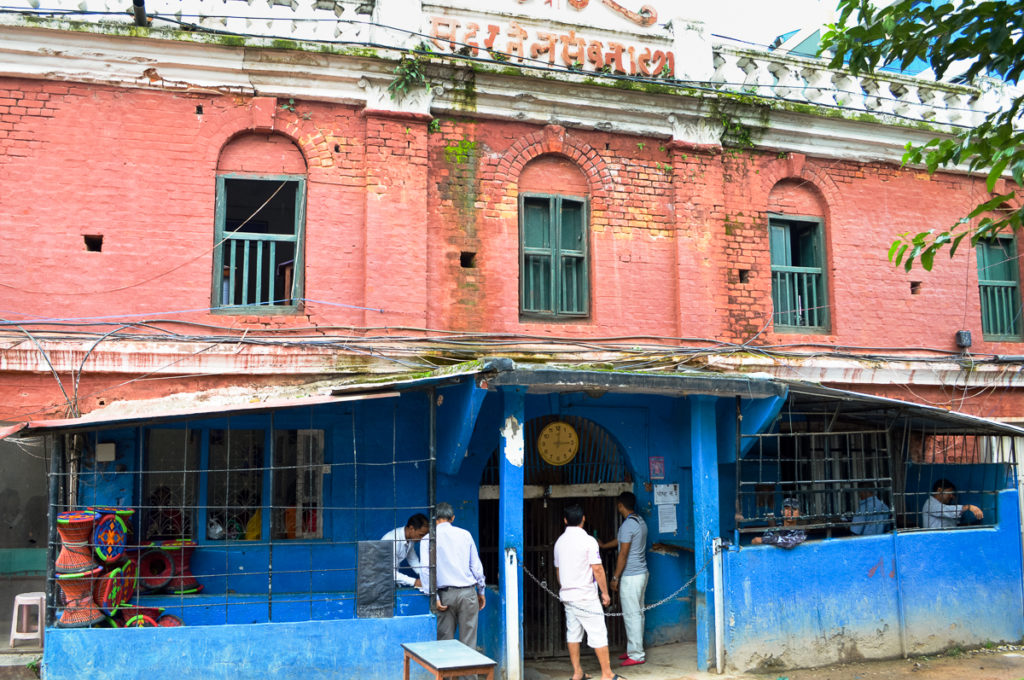 The Nepali inscription atop the main building of Kathmandu Central Jail indicates the complex was built in 1914. A prison building collapsed in the April 25 earthquake, killing 16 inmates, and the remaining buildings were damaged. 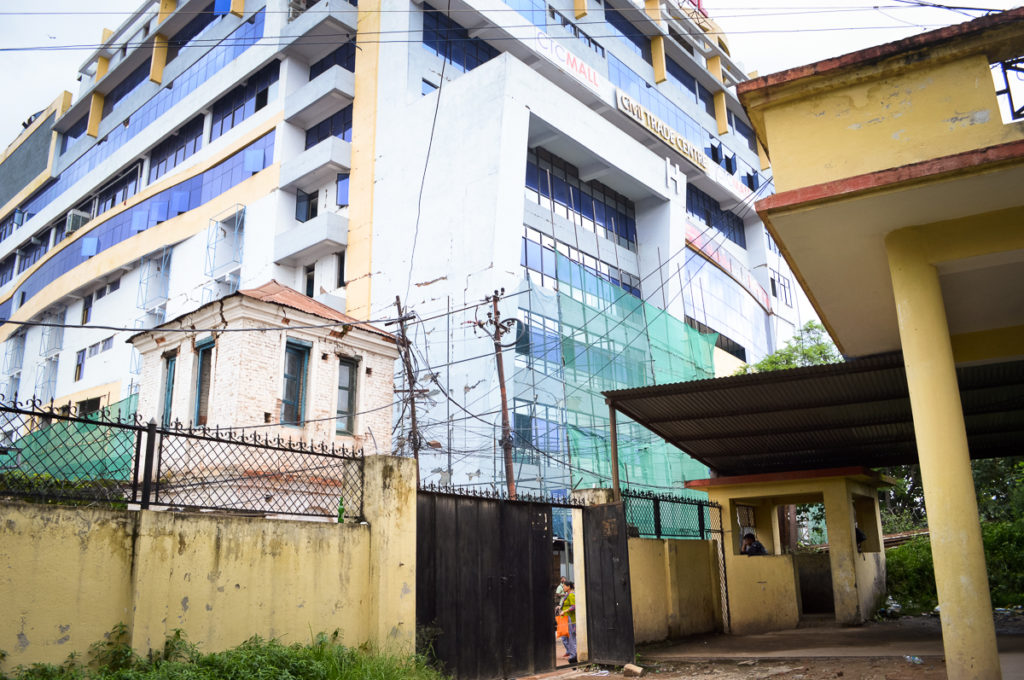 The CTC Mall looms precariously over the watchtower on the main gate of Kathmandu Central Jail. The mall, which was badly damaged in the April 25 earthquake, poses a threat to adjoining streets and buildings. 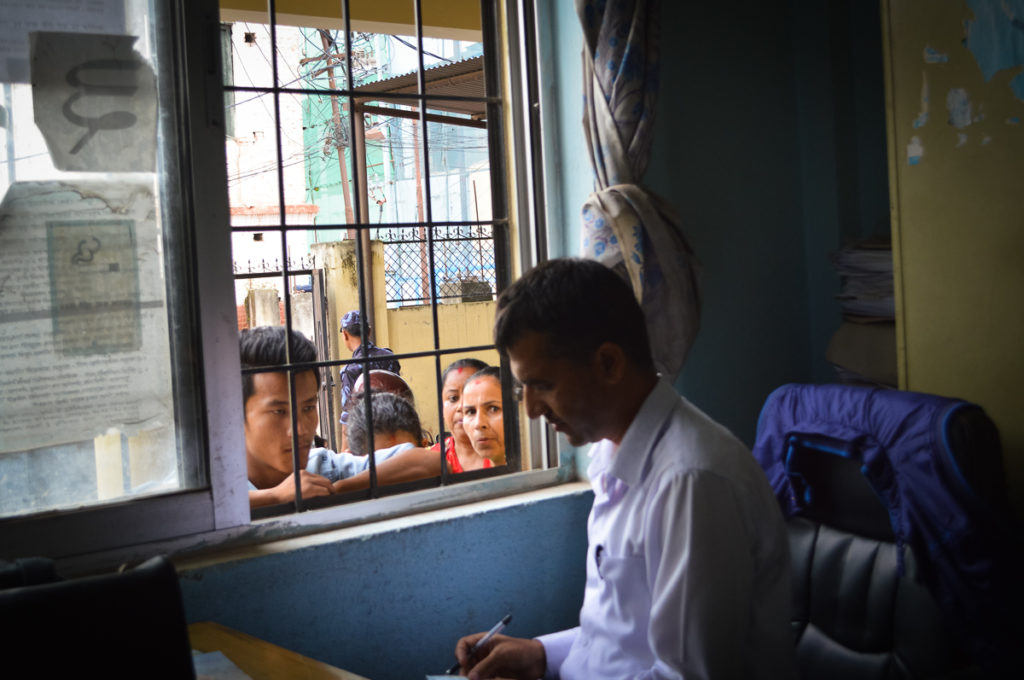 Yograj Rajauria, an official at the prison office, hands out security passes to visitors queued up at his office window. Relatives fear for the safety of inmates at an aging facility damaged by this year’s earthquakes and aftershocks. 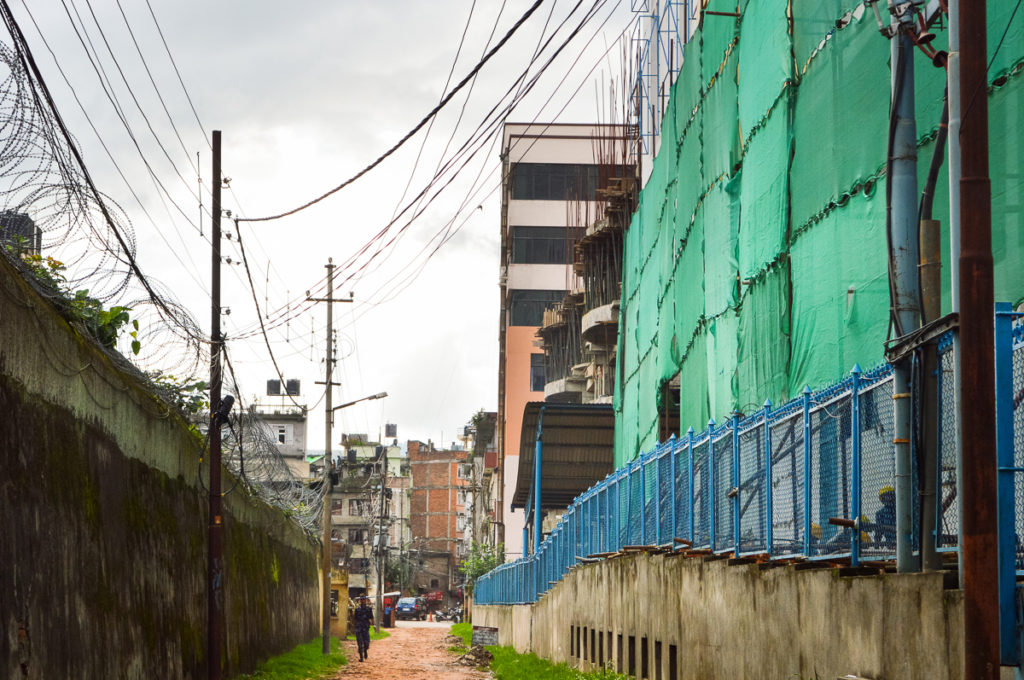 Green netting has been hung from a section of the quake-damaged CTC Mall in Kathmandu to prevent breakaway concrete from falling into the lane that joins the Kathmandu Central Prison in Sundhara, Kathmandu. Visitors, guards, and inmates walk this perilous lane every day.

A prison guard who spoke with GPJ on condition of anonymity says the buildings are so old that one can dig out pieces of the clay walls with one’s fingers. After the first earthquake, every building in the Women’s Central Jail showed some form of damage, the guard says.

“Everywhere you look inside the building, you can see cracks in the wall made by the earthquake,” she says.

Indira Ranamagar, founder of Prisoners Assistance Nepal, which works with prisoners and their children, says the prison conditions were appalling even before the quake.

“The buildings were old and in dilapidated condition,” she says. “The earthquakes have made them uninhabitable.”

The prisoners prefer to sleep in courtyard tents, Shrestha says.

Female inmates with young children have been relocated to a prison factory run as a vocational training center by the Department of Cottage and Small Industries, Ranamagar says. The monsoon season began in June, but many prisoners continue to live in tents.

Even when prisoners are in tents, they are surrounded by crumbling buildings, so they are far from safe, Tara Gajmer says.

The guards and officials face as much peril as the inmates, a prison guard says.

“We will live together and die together,” she says.

The prison has had limited electricity since the earthquakes hit, and only basic bedding is available for women living in tents. Mosquitoes, which breed rapidly in the monsoon season, are a particular nuisance.

One prison official, speaking on condition of anonymity, says the government hasn’t maintained minimum living standards at the prison.

Ranamagar accuses the government of negligence.

“It is a crime against humanity to leave people in such appalling conditions, even though they are tagged as criminals,” she says.

Government officials don’t deny that the prisons are dilapidated, but argue that the problem is one of many in the country.

“Nepal is a poor country with severe resource constraints,” Wasti says. “In such a situation, prison has not been our priority. But after this earthquake, the government will look into it.”

Kathmandu Central Jail received 90 million rupees ($887,000) in the fiscal year that began in July 2014; it spent most of that on food, says Bishnu Prasad Adhikari, accountant at the Kathmandu Central Jail. The capital expenditure allocation for the same period was only 600,000 rupees ($6,000).

“With destruction so large, we are not sure where to start with that money,” Adhikari says.

Nepal Police, assessing quake damage, identified Central Jail – one of the two men’s prisons – as the top priority for renovation, while work on the women’s prison was slated for the fiscal year that began July 15, says Yograj Rajauria, a Kathmandu Central Jail official.

Repairing prisons damaged in the quake will cost 1 billion to 2 billion rupees ($9.8 million to $19.7 million), says Jagat Prasad Thapaliya, an official in the Department of Prison Management. But only 5 million rupees ($50,000) has been released.

Temporary structures will be built to shelter prisoners during the monsoon season, but the inmates at Women’s Central Jail don’t have those yet, Wasti says.

“We do not want to die in these old buildings,” she says.

Rachana Upadhyaya was the first media reporter allowed to visit the Women’s Central Jail and speak with the inmates after the earthquake.