Skip to main content
The story you are reading was published on Wednesday November 9, 2016. To read more recent stories click here. 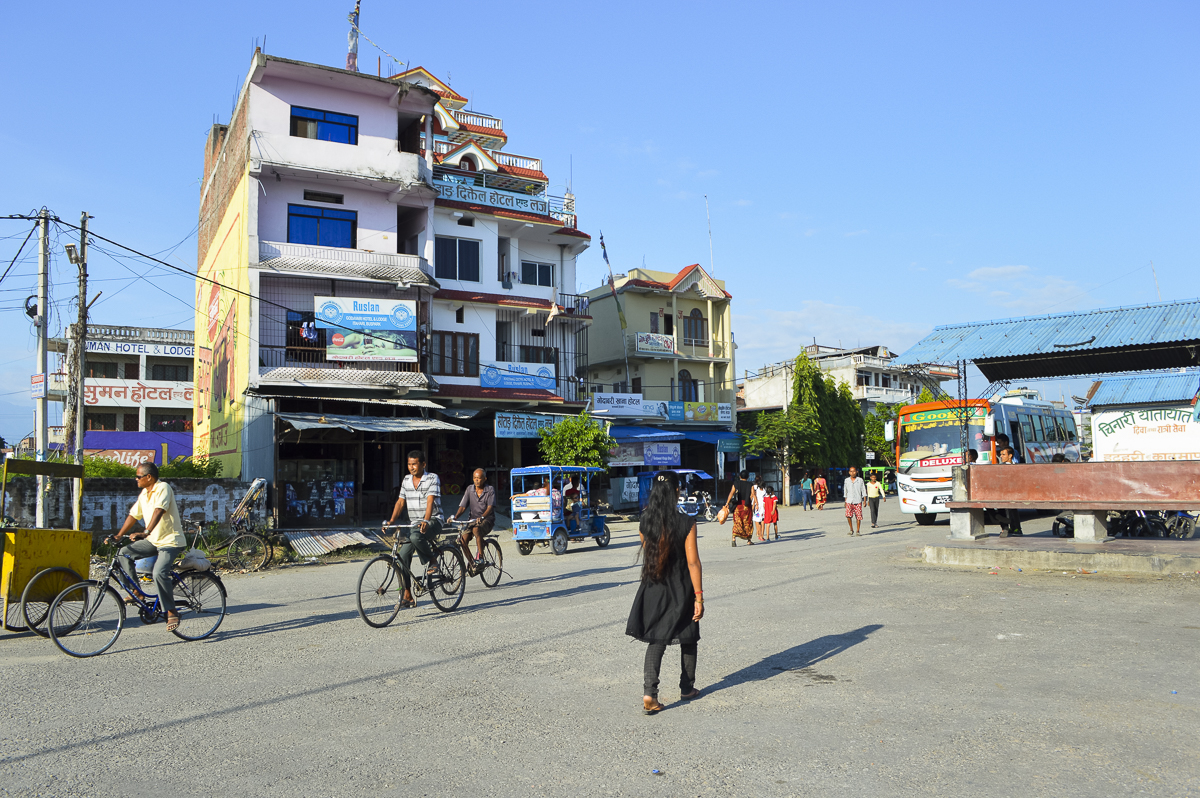 ITAHARI, NEPAL — Soft morning light seeps in through the single window in the small room which Bibina Meya rents for herself and her 2-year-old daughter, Swastika.

Kohl outlines Meya’s eyes. Her lips are a bright shade of orange. Some of the color is smeared on her daughter’s cheeks.

Meya, 21, a sex worker, is preparing to meet a client in Itahari, a city about 5 kilometres (3.10 miles) from where she lives in Khanar in Nepal’s southeastern region. Itahari, host to a highway that connects Nepal and India, which share an open border, is a boom town for the sex trade. The town is a popular destination for Indian traders who want to hire prostitutes.

INSIDE THE STORY: Surprised to find that many sex workers don’t fit the stereotype of women who are easily recognizable with bright, immodest clothing, a Global Press reporter instead finds young, sometimes fragile girls. Read the blog.

Meya says she has been working in the town’s sex industry since she was 14 years old. She stopped working when, in 2013, she married a man she met at the hotel where she worked. The man was not a client of her or any other sex worker. But he left when Swastika, his daughter, was three months old. That’s when Meya decided to return to the industry. She meets customers during the day, when a neighbour looks after Swastika, because she tends to the toddler at night.

“It is not because I like it, but I am compelled to do this work,” Meya says. 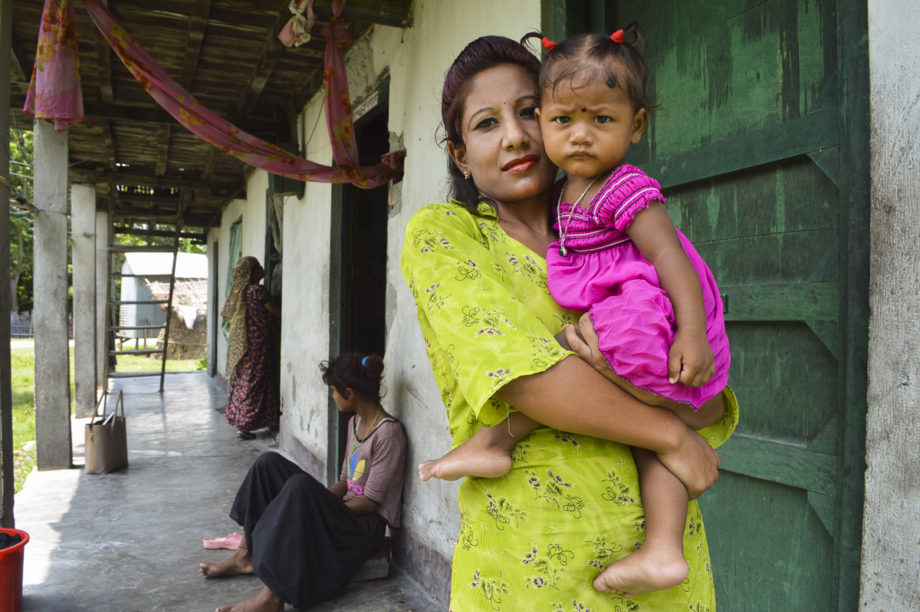 Bibina Meya holds her 2-year-old daughter, Swastika. Meya is a sex worker, but she only works during the day so she can care for her daughter at night.

The sex trade is globally denounced for its ties to sex trafficking and forced prostitution, but in Itahari, a major transport hub in Nepal, the trade is booming because young girls with little education and few job options choose to work in it.

The sex trade isn’t legislated in Nepal—it’s not mentioned in the law so it is neither illegal or legal—but it is thriving, especially in Kathmandu, Pokhara, Sunsari and Kailali, says Narayan Prasad Kaphle, joint secretary of the Ministry of Women, Children and Social Welfare.

There have been no national surveys on the sex trade in Nepal, but one 2011 estimate by the National Centre for AIDS and STD Control put the number of female sex workers in the country over 26,500. Another survey conducted by Swiss relief agency Terre des hommes in 2010 estimated that between 11,000 and 13,000 girls and young women were working in the entertainment industry in the Kathmandu Valley.

Many of the girls and young women in the trade, like Meya, come from troubled backgrounds. Meya says she ran away from her home in western Nepal’s Dang district at 12 years old, after her parents separated. She went to Kathmandu, Nepal’s capital, where she found work in a hotel as a dishwasher, earning about 300 rupees ($2.81) a month.

Two years after she arrived in Kathmandu, a friend told her that she could earn more money by working in a factory. But when Meya agreed to the plan, the friend took her not to a factory, but to the hotel in Itahari, and left her there.

The young teenager was popular with customers. Many men waited for spots in her schedule. There were five other sex workers in the hotel, but they were all between 20 and 25 years old. The hotel isn’t a brothel—it’s a standard place of lodging, but in addition to the ordinary services of a room in which to sleep and food to eat, the hotel also offers Meya and other sex workers, housed on site.

Meya’s story is a common one, says Bimala Malla Thakuri, president of Mahila Sahayogi Samuha, an Itahari organization that promotes awareness of the sex industry and helps sex workers get education.

In some cases, Thakuri says, the girls are even younger than 12.

Dhakal says that poverty and family problems usually drive girls and young women into prostitution. Some of the girls are barely literate, she says. 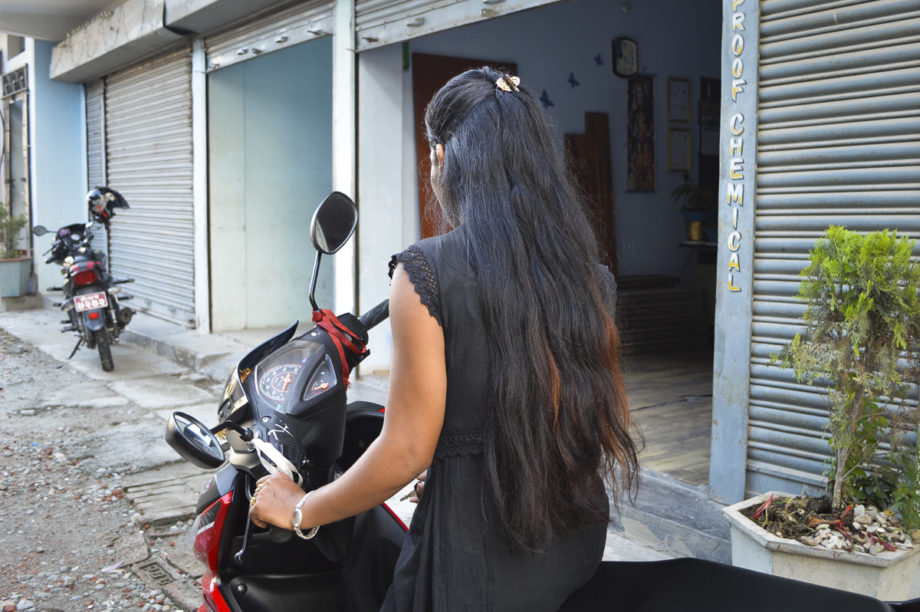 Kamala, 20, became a sex worker when she was just 14 years old. She says it’s the only job in which she can earn the money she needs.

But Sunita Danuwar, founder and executive director of Shakti Samuha, an organization that fights sex trafficking, says girls who enter the sex trade before they’re 18 years old can’t be assumed to have made a rational decision.

“Girls below 18 years are not sex workers,” she says. “They should be considered as trafficked.”

The lack of family protection leaves them with few options, Danuwar says.

“No one wants to sell their body,” she says. “They do it to survive.”

Girls below 18 years are not sex workers. They should be considered as trafficked.Sunita Danuwar, founder and executive director of Shakti Samuha, an organization that fights sex trafficking

Kaphle, the joint secretary of the Ministry of Women, Children and Social Welfare says education is the key to curtailing the sex trade, especially for young girls. The government provides free education up to grade 10, he says.

But Danuwar says free education is not enough. Access is a problem, she says.

“Students in villages have to walk for three to four hours to go to school,” she says. “Girls are made to do household chores at home. There are child marriages and domestic violence at home.”

Meya says she has realized the importance of education, and is determined that her daughter will complete school and, one day, become a doctor.

“I can’t do this always,” Meya says of sex work.

She wants to connect her daughter with an organization that can support her.

“Then I can look for other jobs,” Meya says.