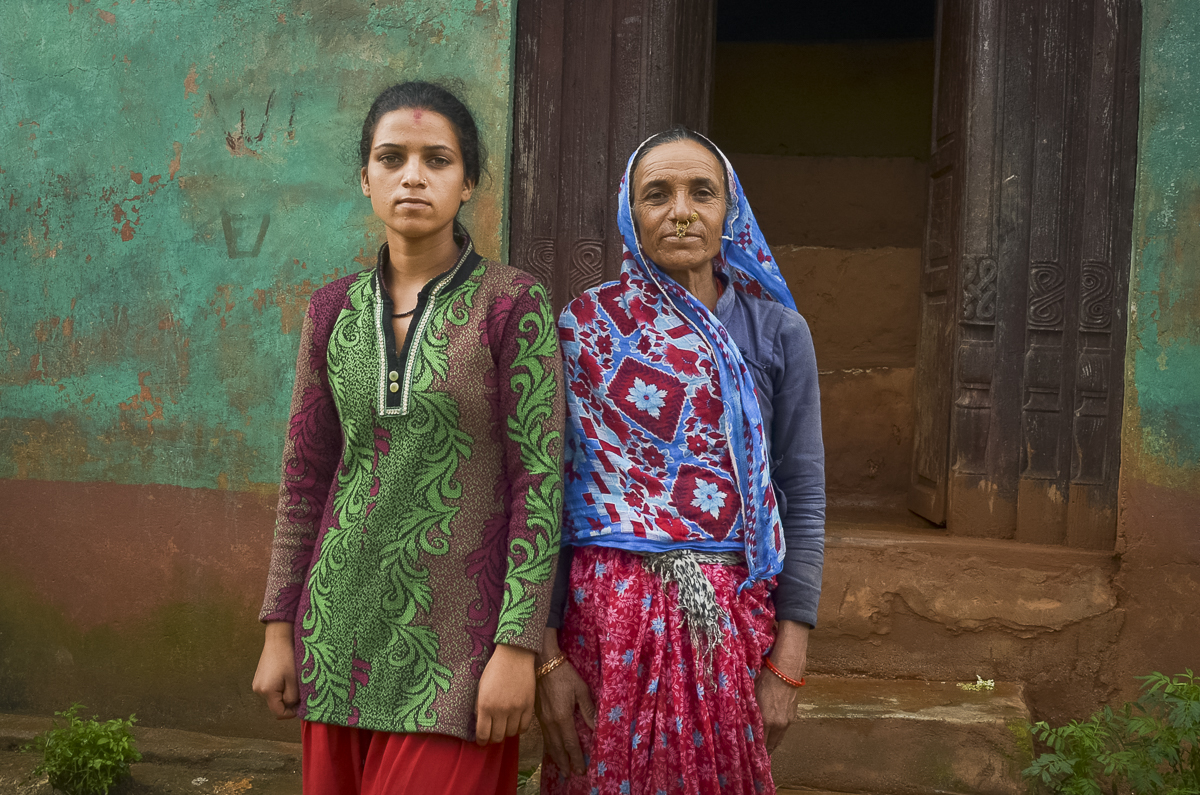 Global Press Journal reporter Kalpana Khanal traveled to Nepal’s Baitadi district, a remote area that hugs Nepal’s western border with India, to discover what life is like for people there. She found lush hillsides and picturesque communities, but also extreme poverty. (Read Inside the Story to learn more about Kalpana’s reporting journey.)

This story is one of three GPJ reported from Baitadi district. Read our story on the area’s lack of schools here. The third story, on migrant workers, is forthcoming.

Families here eke out a living as laborers in other villages or as migrant workers in other districts and countries. The rocky mountain terrain isn’t suitable for farming, and even if they could grow crops, the two-hour trek to the nearest roadway would make it impossible to get goods to market regularly, villagers say.

Hemanti, 14, says her family ─ she’s the oldest of six girls ─ sometimes goes hungry. Her father’s income as a worker in a nearby quarry isn’t enough, and he spends much of what he earns on alcohol, anyway, she says.

So she was thrilled when her parents told her in November that she would go to live with another family. Hemanti remembers her father’s words:

“You are now grown up,” she recalls him saying. “You have to go to live in another home. There you will get delicious food to eat and nice clothes to wear.”

But the day before the new family was scheduled to come visit, two teenage girls came to her home. Hemanti says she listened in and heard them arguing with her parents about her future. It was only then, Hemanti says, that she realized her parents had arranged for her to be married, and that the new family would be her in-laws. 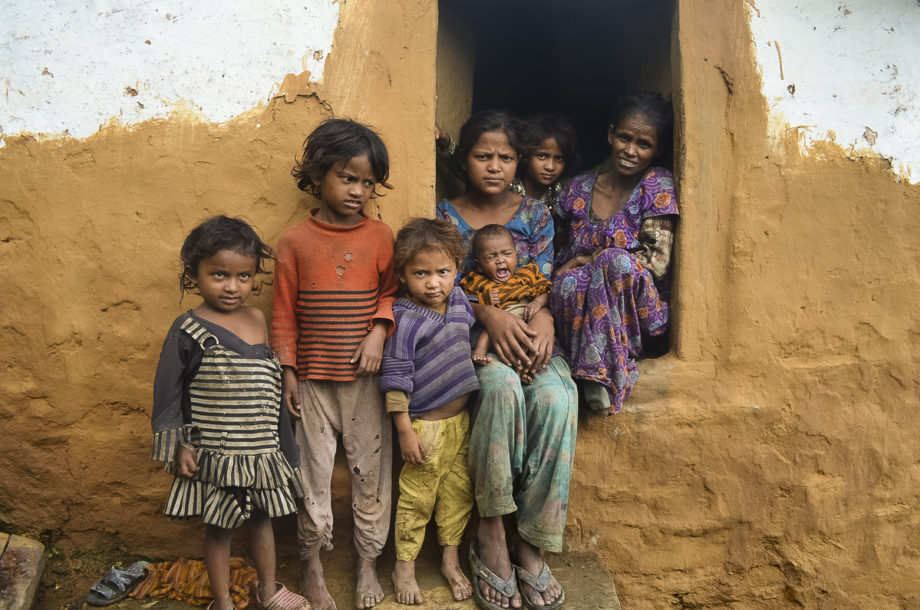 Hemanti Koli, 14, sits with her mother and her sisters. Hemanti says her parents had 10 children, four of whom died soon after birth, with hope they’d have a son.

The two visitors “warned my parents that they would go to jail if they marry off a child and spoil her life as they had done with their own lives,” Hemanti says.

The two teenagers, Manmati Tailor and Urmila Chanda, argued and talked for many hours. Hemanti says that conversation saved her.

“If the sisters had not come at that time, my parents would have sent me to the other home, luring me with a promise of delicious food,” she says, using the honorific term “sisters” for Tailor and Chanda. “Those sisters saved me.”

Six months earlier, in May 2015, Tailor and Chanda, both 19, had attended a five-day training program organized by the Women’s Development Office and the District Development Committee of Baitadi, together with UNFPA Nepal. The program was part of a Women’s Development Office effort to train groups of girls in every one of Baitadi district’s villages in education, health and other social issues. The topic of child marriage was also covered, including the fact that the legal marrying age in Nepal is 20.

It came as a surprise to Tailor that early marriage was wrong. She says her family tried to marry her off when she was 16, but she refused, despite not knowing the impact child marriage can have on families and society.

Tailor says it’s common in her village for girls as young as 9 to be married.

“I did not have any idea at that time it was wrong,” she says. “We were all compelled to become a mere spectator, thinking that the rules made by society should be blindly followed.”

If current global trends continue, around 142 million girls will be married by their 18th birthday in 2020, according to the UNFPA. 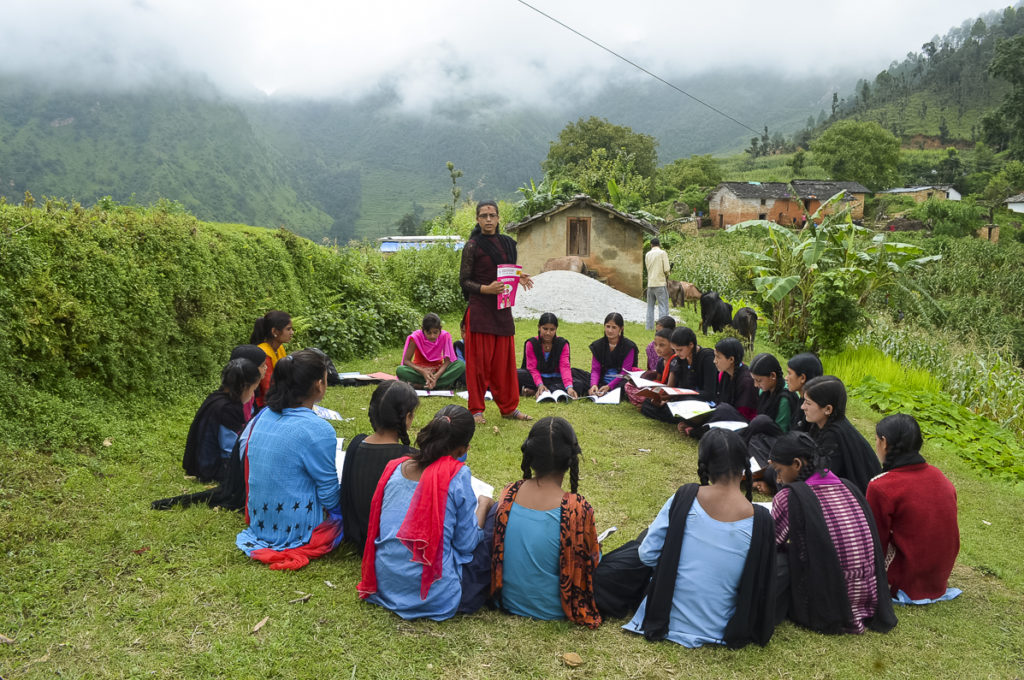 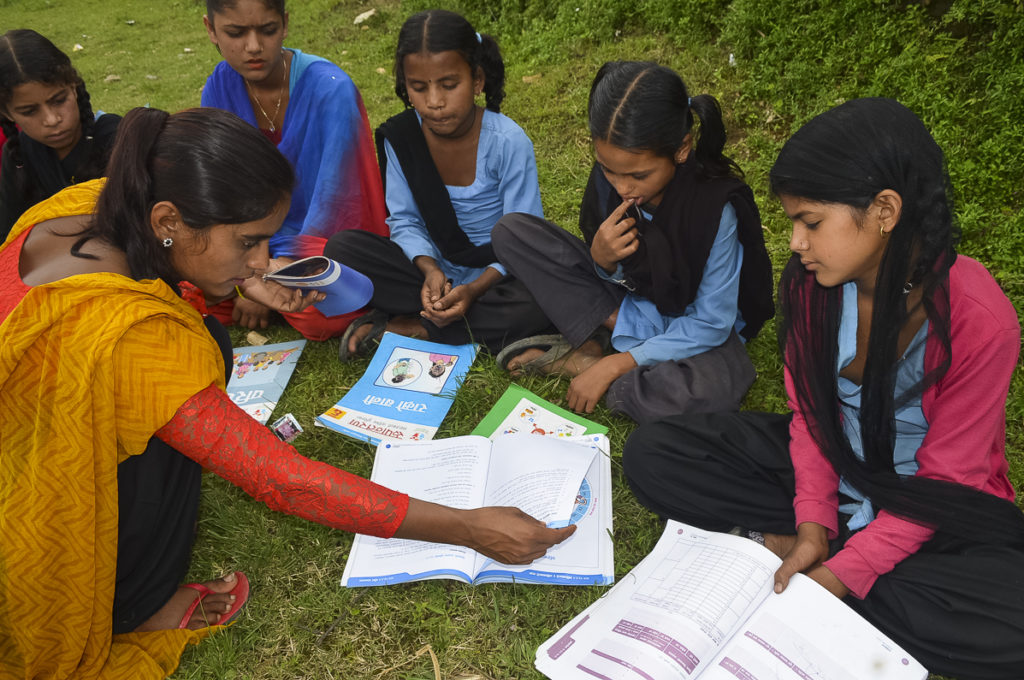 Urmila Chanda, 19 (in yellow shawl), teaches girls about the dangers of child marriage. Child marriage is common in Nepal’s far western Baitadi district, but efforts are in place to end the practice. 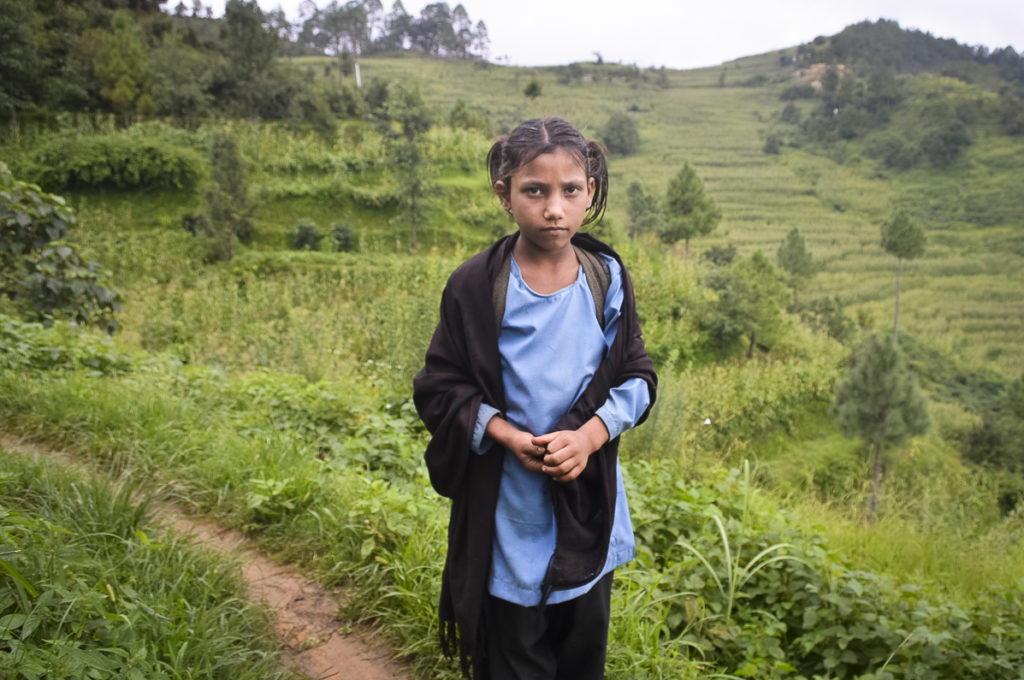 Parbati Damai, 9, was set to be married to a 40-year-old man when girls and young women in her village learned of the plan and convinced her parents to stop it. 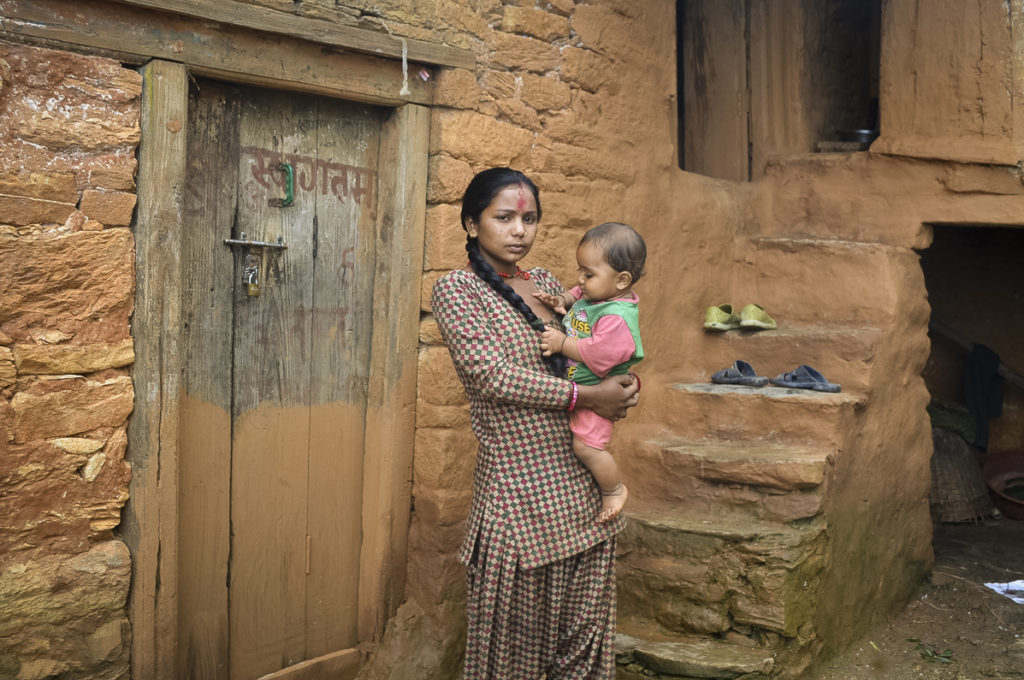 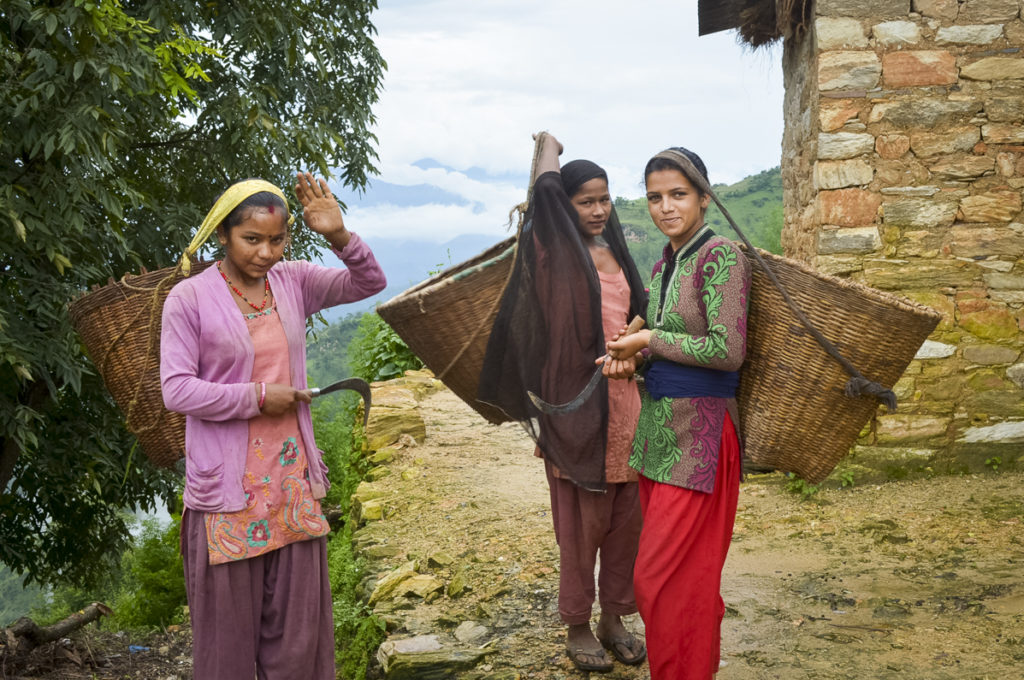 Manmati Tailor, 19 (far right), prepares to cut grass with friends. The grass will be used to feed cattle. 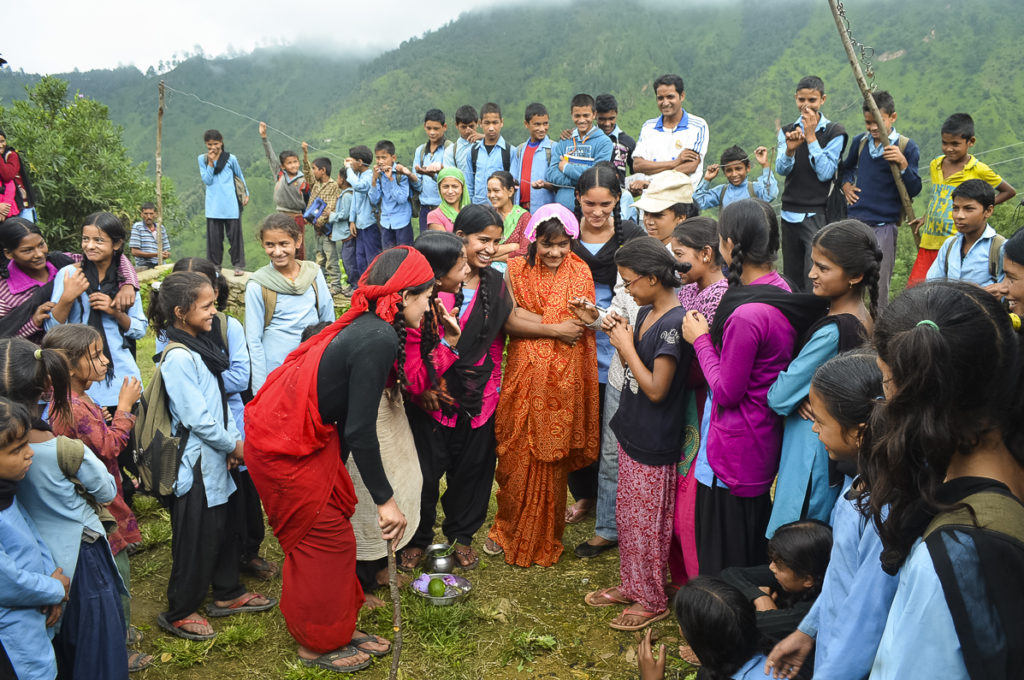 Members of a Girls’ Circle, which works to end child marriage, participate in a play about a mother who stops the marriage of her 13-year-old son. 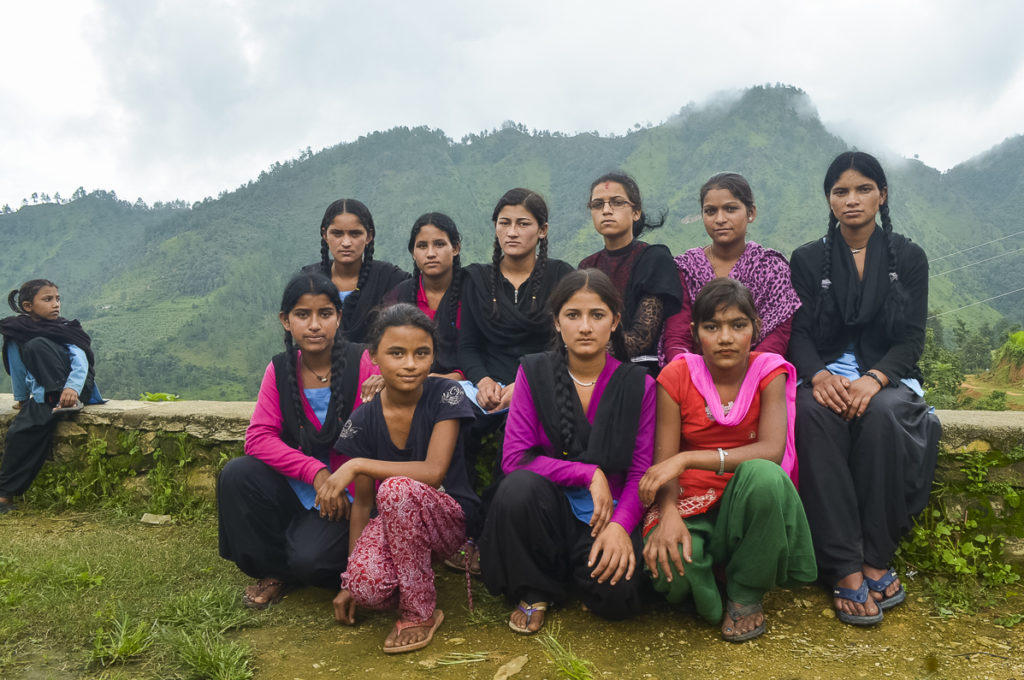 Members of a Girls’ Circle work to end child marriage in their community.

Penalties for child marriage are too lenient in Nepal, says Sujan Panta, a lawyer who works to raise awareness on the issue.

The law allows for a fine of up to 10,000 rupees ($93.32) or a prison sentence of up to three years for parents who arrange marriages for their children.

“We throw a person selling 25 grams of drugs behind bars for 10 years, but only three years for those who spoil a child’s entire life by marrying her off,” he says. “The law is very weak if we view it from that perspective.”

Child marriage is a barrier to Nepal’s development, says Narayan Prasad Kafle, spokesman of the Ministry of Women, Children and Social Welfare.

When children marry at a young age, both partners stop going to school, he says. The girl stays at home to do housework, while the boy gets a job in order to support his wife and extended family.

“If the parents do not obtain proper knowledge, then the next generation will also become illiterate,” he says.

Young mothers are more likely to have health problems, which puts a financial burden on the family and government, he says. Poor health prevents girls who wish to work from joining the labor market.

The ministry has established an Office of Women and Children in each of Nepal’s 75 districts to ensure that child marriage, as well as other issues relating to women and children’s rights, are addressed, he says. The ministry has also prepared a National Strategy 2016 to end child marriage by 2030.

But much of the hard work is being done in small villages, by young women like Tailor and Chanda. They returned to their village after their training, determined to reverse Nepal’s child marriage trend.

“It was difficult to convince villagers at the beginning,” Tailor says. “Nobody was interested to listen to us.”

But they persevered and began holding meetings of what they call the Girls’ Circle. At first, just four or five girls and young women attended. By August 2016, the group had 150 members, ranging in age from 8 to 19. 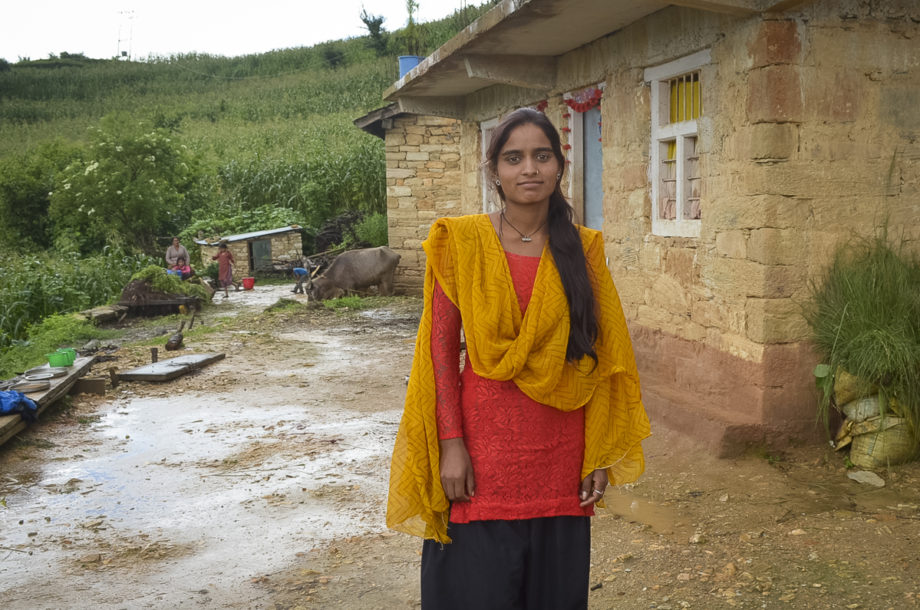 Urmila Chanda, 19, works to end child marriage in her region.

Now, when Chanda and Tailor hear that a child marriage is being planned, they visit the family.

“Either by convincing people or arguing with them, we are stopping child marriages in the village,” Chanda says.

If the parents don’t agree to stop the marriage, Chanda and Tailor inform the Women’s Development Office of Baitadi district or the local police.

The Girls’ Circle has stopped five child marriages since it began its work in June 2015. Hemanti Koli’s marriage was one of them.

Hemanti is now an active member of a local Girls’ Circle, and she reminds her parents that she’ll only consider marriage once she’s 20.

For Tailor and Chanda, the work doesn’t always go smoothly, even in their own families.

“Sometimes our parents and families scold us, asking, ‘Why are you trying to be smart? Nothing happened to us when we married when we were 9 years old,’” Chanda says.

The Girls’ Circle formed too late to help Karishma Nepali, who married in 2013, when she was 15.

Now 18, Nepali lives with her in-laws. Her husband is a migrant worker in Malaysia, and she has a son who isn’t yet 2 years old. She does all the housework for her husband’s family, she says.

“If I had known that it will be so difficult, I would have not married at an early age,” Nepali says. “I came to know only after the marriage that one should not marry at an early age.”

Tailor is in her last year of school, and she plans to pursue a bachelor of arts degree in sociology. She’ll hand over the Girls’ Circle to a young leader, she says, and set up a youth network, involving both men and women, to fight child marriage.