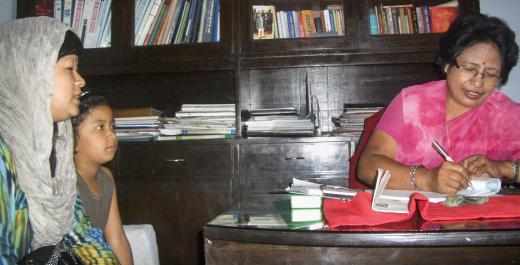 KATHMANDU, NEPAL – “Some people would come to me and doubt my ability as a woman to read their future,” astrologer Puspakala Kaushik says. “But when they later realized that whatever I predicted turned out to be true, they would come back to me repeatedly.”

Kaushik, 39, dresses traditionally in a red kurta surwal with a vermilion mark on her forehead. But her pursuit of astrology as a career is not traditional for a Nepalese woman. She is among the growing number of women here breaking into the historically male profession.

Kaushik owns Brihat Jyotish Paramarsha Sewa Kendra, or the Comprehensive Astrological Consultancy Service Center, in Kathmandu, Nepal’s capital. From 11 a.m. to 7 p.m. every day, she tells her clients’ past, present and future based on their birth dates and horoscopes.

She also draws from the Vedas, the four canonical collections of Hindu hymns, prayers and liturgical formulas that society used to not permit women to study.

“Astrology is also a Vedic science,” she says. “The horoscope indicates the good and bad planetary influence, and we predict accordingly.”

Unlike many astrologers, she uses modern technology – a laptop – to communicate with clients and to share her readings with them.

Astrology has given Kaushik an alternative means of earning a living. After finishing her bachelor’s degree in humanities, she worked in a wholesale business that sold naphthalene, a chemical used in mothballs, but the company incurred losses for two consecutive years.

“My friends suggested that my stars may not be in my favor and recommended me to consult an astrologer,” she says. “Reluctantly, I visited one on my friends’ insistence. I was surprised when the astrologer told me about my past, present and the future, too.”

After that, she got curious about astrology and started researching the field, she says. She visited a string of other astrologers, but she found only male Brahmans, the Nepalese high caste that traditionally has worked in astrology. This inspired her to take up the profession as a woman.

“I self-studied astrology for four years and got myself involved in various related trainings,” she says. “Finally, in 2005, I started this center and pursued astrology as a profession.”

When she started working as an astrologer, many people talked about her behind her back because she is a woman and a member of the Chhetri caste, which ranks lower than Brahman, she says. She recalls many prospective clients who walked into the center and turned around when they realized she was a woman.

“But I remained steadfast and continued my work,” she says.

Today, Kaushik sees about nine customers each day. She does not charge set fees for her services. Rather, clients pay her based on their satisfaction with the results. She bolsters her income by offering readings to Nepalese people abroad by phone.

Traditionally, society reserved the practice of astrology in Nepal to males from the Brahman caste, but women of other castes are now eroding this custom. Astrologers say the profession offers women a viable economic opportunity. The government college is offering scholarships to a diverse group of women to encourage their study of astrology. Practitioners say rigorous study separates genuine astrologers from charlatans. Women and men cite their growing trust in female astrologers. The government pledges to help create more job opportunities in the field if it receives requests for support.

In ancient times, society forbade women from studying the Vedas, chanting hymns or reading Sanskrit verses – which are key to astrology, Kaushik says. Astrologers were only Brahman men. They wore long, white shirts and loincloths, had thick tufts of hair on top of their heads and carried birth charts. But now, that image of the astrologer is diminishing as women adopt the profession.

Hindu scriptures do not forbid women from studying astrology as a profession, says Dinesh Raj Panta, an archaeologist and a professor at Balmiki Campus, the only government college in Kathmandu that offers a full curriculum in numeric and predictive astrology. Rather, people have disapproved of women being astrologers because of the patriarchal mindset of society. But that is slowly changing.

Women began to pursue astrology only about 15 years ago at homes and in other private capacities in some areas of Nepal, says Madhav Prasad Pandey, the former president of the South Asian Astro Federation, a nonprofit nongovernmental organization of astro-scientists. He is now an assistant professor at Balmiki Campus.

Female astrologers are changing people’s perception of the profession, says Rati Joshi Shrestha, chairwoman of the National Women Astrologer’s Association. Established in 2011, the association works for the rights of female astrologers.

“Taking up this exclusively male profession by women means great attitudinal change coming over in the traditional orthodox Nepalese society,” she says.

At 53, she holds master’s degrees in Nepali language and economics and also studied astrology for 30 years while working at a government commercial bank. She took up the profession of astrology when she retired in 2010. Today, she writes the horoscope feature regularly for Sandhya Times, published daily in Newari, the language of the Newar community.

“People who read my horoscope feature come searching for me for further counseling,” she says. “Astrologers can predict the right path to be pursued by their clients.”

In addition to helping clients, female astrologers can also support themselves economically.

The National Women Astrologer’s Association recommends 200 rupees ($2) as the minimum fee that astrologers should charge each client seeking horoscope services, Joshi Shrestha says. It suggests 500 rupees ($5) for those seeking other predictions, such as marital matchmaking and advice on when to begin building projects.

“If a person has good knowledge of astrology, he or she can earn more than 400 rupees [$4] a day as consultancy fees and can depend on it for livelihood,” Joshi Shrestha says.

The association, which currently has 10 members, has been encouraging women to join this profession, Joshi Shrestha says.

“The association aims to increase the number of women to make them independent this way,” she says.

Sudha Bhattarai, 38, is the owner of the Astrological and Vastu Consultancy Centre in Kathmandu. Although she has master’s degrees in sociology and management, she has been working as a professional astrologer since 2012.

Bhattarai writes horoscopes of people based on their dates of birth. She recommends auspicious dates for building construction and rituals such as weddings and sacred thread ceremonies. She also advises people on the style and orientation of buildings, among other services.

“A skilled astrologer can advise about the profession in which he or she can succeed, suggest the status of the stars and the type of precious stones to be worn as rings for different zodiac signs,” she says.

Bhattarai provides services to three clients a day and charges 300 rupees ($3) each, she says.

“I have been providing satisfactory service to all,” Bhattarai says confidently. “I have saved a person physically through astrological counseling who was suffering from severe depression with suicidal tendency.”

Financial support at Balmiki Campus aims to make the study of astrology affordable for women.

A degree in medicine, engineering or aviation can cost upwards of 2 million rupees ($20,000) to 3 million rupees ($30,000) at colleges in Nepal, Poudel says. But graduates face unemployment in both private and government sectors.

Balmiki Campus, however, charges astrology students only an admission fee of 580 rupees ($5.80), says Sudharshan Dhungana, the principal of the college. Tuition is free for the school’s comprehensive astrology program, which takes seven years to complete – a two-year undergraduate base, a three-year master’s degree, and an additional two years of specialized study.

In addition, Balmiki Campus offers stipends to Brahman and non-Brahman women as well as to non-Brahman men studying astrology.

“Traditionally, the Nepalese society believed, as a whole, that religious worships and astrology should be performed exclusively by the Brahmans, the so-called uppermost caste,” Panta says. “In order to encourage the non-Brahmans to the study of astrology, Balmiki Campus has introduced stipends for them.”

At Balmiki Campus, 10 percent of the female students are studying astrology, Dhungana says.

Rigorous study is the difference between genuine and fake practitioners, astrologers say.

When Bhattarai was young, she did not believe in astrology, and it used to surprise her that family and friends consulted their horoscopes in the newspapers in the morning, she says. She was curious to know whether the predictions came true.

She started reading books on astrology and also met experts. After five years of self-study, she enrolled in classes at the Institute of Oriental Philosophy, Kathmandu, where she completed a two-year course on predictive astrology.

“The more I studied,” she says, “the more I started believing in it, and, hence, I took it up as a profession.”

But there are also charlatans practicing astrology with scanty knowledge, resulting in skepticism about this profession, Bhattarai says.

The astrologer predicted that he would be selected for a government job the last five times he applied, but it never happened. Worse was the mental anguish from the prediction that he would get into a major accident.

“I am now 25 years old, fit and healthy to date,” he says. “But the astrologer had predicted that I will face great bodily accident at the age of 22.”

People who face scarcities and hardships in their lives visit astrologers more often, says Srijana Shrestha, assistant professor of psychology at the Ratna Rajya Laxmi Campus, a government college in Kathmandu. People between ages 20 and 25 who fail in their studies or careers despite working hard most frequently visit astrologers.

Women and men express their increasing reliance on female astrologers.

“In the past, male astrologers used to give me detailed advice only if I paid them more,” she says. “For the last one year, I have been taking advice from female astrologers, who have been giving me enough time for the forecasts, which have turned out to be true, and I have been able to express my feelings with frankness.”

Astrologers’ clients are mostly women, and it is easier for them to open up to female astrologers, Poudel says.

Men are also relying on female astrologers for important predictions.

Gaurab Rajkarnikar, 29, arrived in Kathmandu in March to get married after completing his master’s degree in business administration in the United States, where he went to study at the recommendation of an astrologer. Since returning to Nepal, he has consulted a female astrologer about his prospective bride, their future after the marriage, and an opportunity for them to migrate to Australia.

“The horoscope of my wife caused procedural delay for some days,” he says. “But in 10 days, we are flying there. I have as much faith in astrology as in God.”

It is important for everyone to consult an astrologer to read their birth charts at least once in their lifetimes, Bhattarai says.

In addition to studying astrology texts, women should learn how to read and speak English to continue to advance in the profession, Poudel says.

“It would be an added advantage for them to consult more literature and enhance their acumen,” he says.

The government has been hesitant to provide help and facilities to organize astrology as a formal profession, Poudel says. Aside from stipends at Balmiki Campus, the only support from the government was a grant of 200,000 rupees ($2,000) in 2006 for the International Astro and Oriental Heritage Conference in Kathmandu.

“If this sector is well-organized and managed, many people can get alternate employment,” Poudel says.

In the meantime, Poudel encourages women in their pursuits of astrology.

“If women can move forward with confidence, they will have a bright future,” he says.

Interviews were conducted in Nepali. No sources in the article are related.