Skip to main content
The story you are reading was published on Tuesday April 28, 2015. To read more recent stories click here. 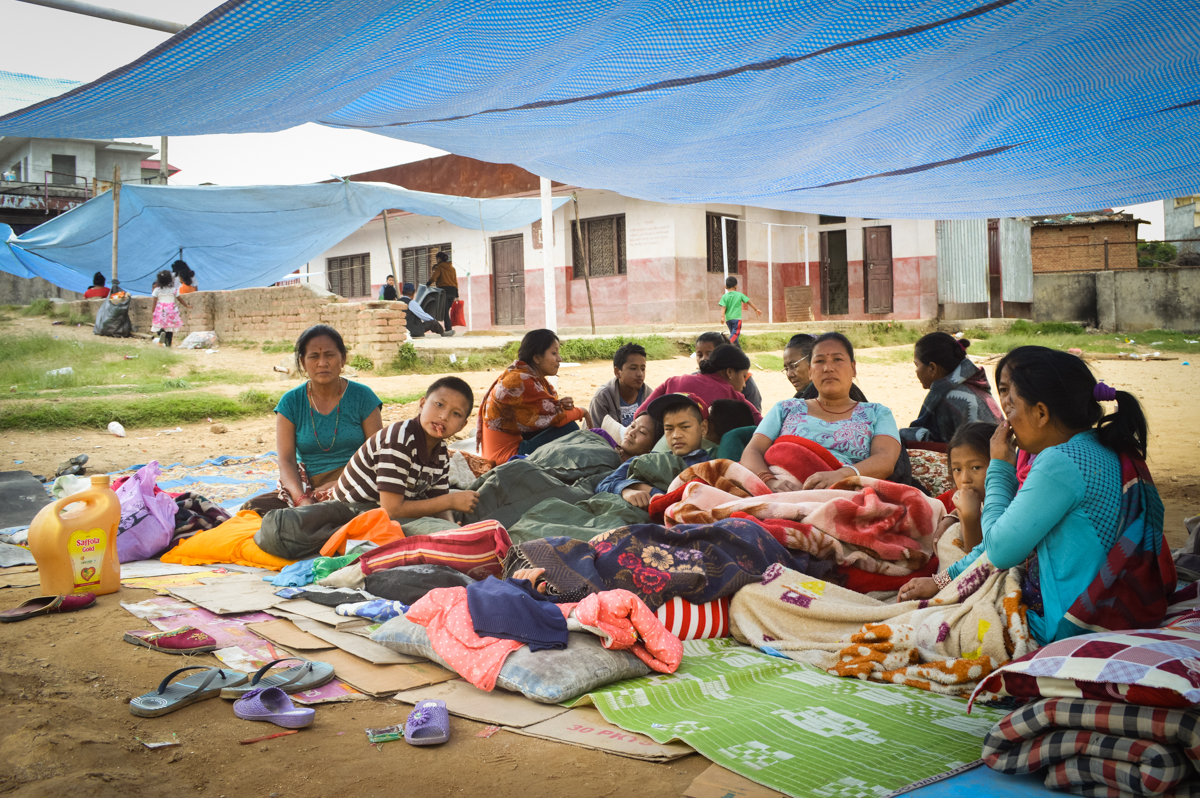 Supplies are low in the tent communities that now pepper Kathmandu, Nepal’s capital, where countless people are staying because their homes were destroyed or because they fear returning to buildings that might still collapse in an aftershock.

“The earthquake has taken away everything,” says Sesh Kumari Gurung, whose parents’ and husband’s homes were destroyed by the earthquake. “I have nothing left.”

Like many survivors, she has abandoned the room she rents to avoid the risk of a collapse in the aftershocks that have frequented the region since the earthquake. She has joined others to live in tents in a football field in Bansbari, a neighborhood located outside Ring Road, which encompasses the central part of the city.

“We are scared,” says Tulsi Thapa Magar, who occupies one of the tents. “What if there is another earthquake?”

Rumors have spread that a larger earthquake may hit, but no official information has been released.

Over 3,000 people are confirmed dead, reports the International Federation of Red Cross and Red Crescent Societies, and that number could climb as more bodies are discovered or additional aftershocks rock the region.

Kathmandu Valley’s last major earthquake was in 1934, when an 8.4-magnitude quake killed 8,500 people. Nepal’s government has for years prepared for another earthquake of that magnititude, which experts estimated as recently as 2013 could displace 1.8 million people and kill more than 100,000, according to United Nations reports.

Upendra Kumar Gupta, a watch mechanic, and his wife and two children have stayed with relatives near the stupa, a Buddhist place of worship, in Thahity, a neighborhood inside Ring Road, since fleeing their apartment Saturday.

“Our rented apartment is not damaged,” Gupta says, “but we came to stay here because it is safer, and our neighbors are here too. It is better to be with neighbors and community than alone.”

Bishal Shakya, 19, is also staying near the stupa with his family.

“I feel scared remembering the earthquake,” he says. “I don’t know where to run if we have another earthquake.”

With shops closed, the homeless are short on food and water.

“We are afraid to go inside our homes to cook,” Gurung says.

They are surviving on packaged noodles and beaten rice, she says. Lacking bottled water, they draw drinking water from aquifers using tube wells, even though untreated groundwater in the region is unsafe.

“We know that water from tube wells is not good for our health,” Gurung says. “But, what to do? We have no other options.”

The makeshift camps have neither electricity nor proper sanitation.

Surya Man Shrestha stays with his family in an old courtyard in Thahity.

“Everyone came to sleep here,” he says. “It is safer. We have not had electricity since Saturday.”

The government has opened some office grounds to the public inside Ring Road, including the Narayanhiti Palace Museum. But people who live outside Ring Road say they cannot make it to these destinations.

“These places are too far off,” Thapa Magar says. “I am old. We have little children. How are we supposed to get there when there is no transportation?”

And so overcrowded tents cover the field at night. Some tents house more than 30 people.

“It also gets very noisy,” says Priyanka Sunal, who took shelter at the Bansbari football field with her 9-month-old baby. “It is very difficult to get my baby to sleep at night due to the noise.”

A few seconds after a tremor on Monday afternoon, Sunal and a relative hold hands for a few minutes, trying to calm each other.

“We hardly sleep at night,” Sunal says. “We are so scared that there may be another earthquake.”

Unable to obtain government assistance, people manage by helping one other.

“People share food and water,” Sunal says. “People who are injured are helped by others.”

Samay Gurung, who brought her four children to the Bansbari football field, and other families pooled 200 rupees ($2) each to create a common shelter. With the 1,800 rupees ($18) they collected, the families bought two tents.

But uncertainty hangs over the tent camp.

“Since we got here, we have been hearing rumors about the earthquake,” Thapa Magar says. “We have no proper information.”

Radio Nepal, a government media outlet, has served as the main source of information. On Sunday, Nepal Telecom sent out a text message urging Nepalese to stay safe and to help one another.

Samay Gurung, a construction worker, worries about money running out.

“I survive on daily wages,” she says. “I have not worked since the earthquake. I have to feed four children. I don’t know what to do.”

“We have survived so far,” Sunal says. “We don’t know what will happen tomorrow.”

No sources in this article are related. Shilu Manandhar, GPJ, translated interviews from Nepali.