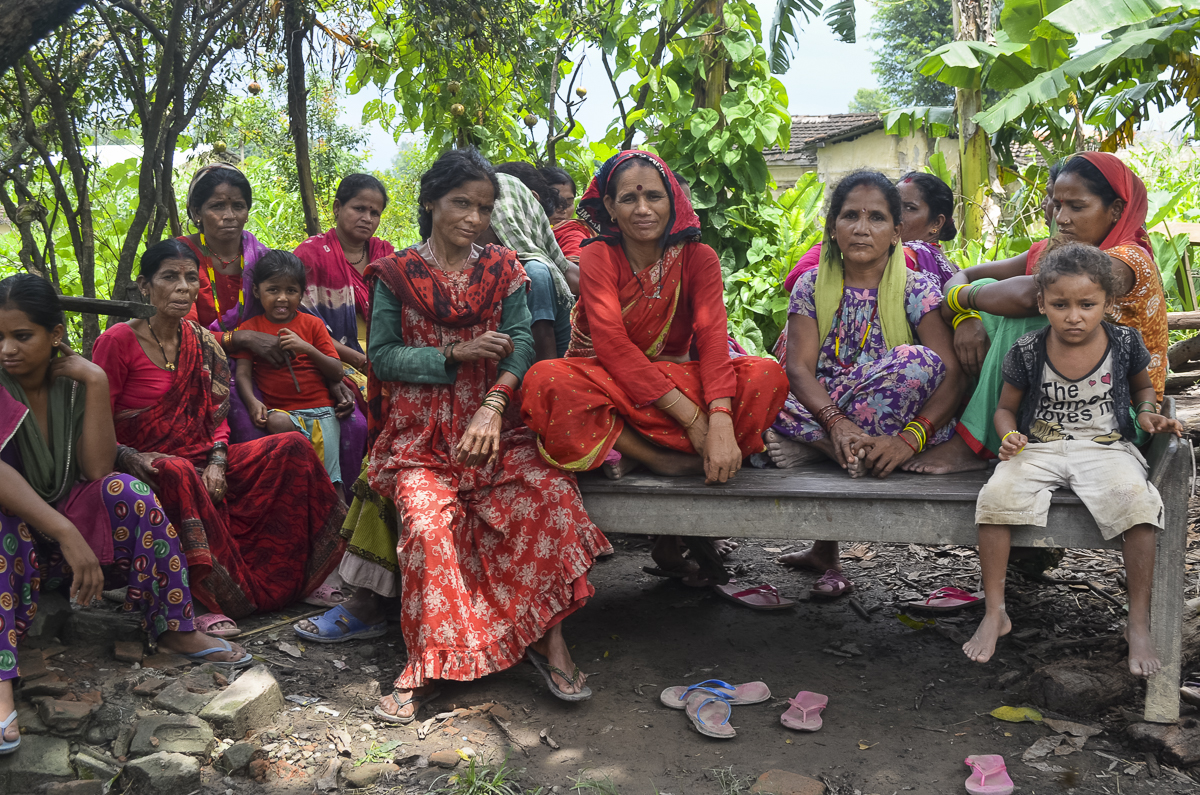 MASURIYA, NEPAL — When people in rural Masuriya village in western Nepal see trucks carrying sand and gravel, they interrogate the drivers, asking to see their documents to ensure what they’re doing is legal.

“The villagers now ask questions like ‘Where is your tender from?’ ‘How much does your document allow [you] to excavate?’” says Haris Bhatta, a local resident who mobilizes communities to police conservation of Nepal’s Chure area. “Tender” refers to documents that offer permission to excavate.

If the excavators and the drivers who move the excavated materials can’t produce the documents, the villagers arrest them, he says.

For years, the area known as the Chure, a huge swath of space along southern Nepal that accounts for 12.8 percent of the country’s total land area, was an open-door smorgasbord of natural resources. Trees, gravel, sand, plants and more were available for the taking.

Eventually, the increasing absence of those resources, and the mining of sand and gravel in particular, took its toll. In 2014, the government designated the area for conservation and banned all extractive activities. 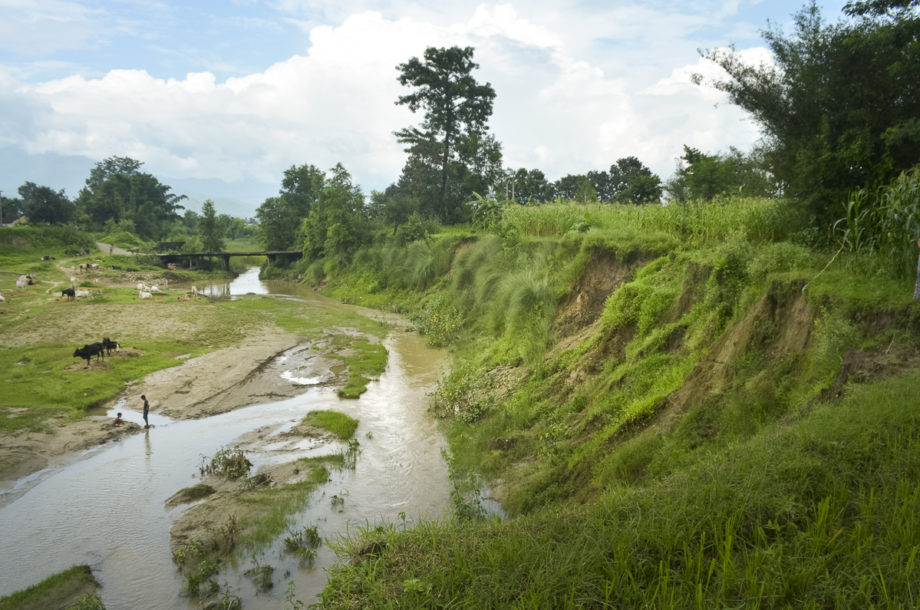 Likma Kateni River is changing course and pushing toward land where people graze their animals and build their homes. Environmentalists say the change is due to excavation of sand, gravel and other construction materials.

Local people take their role as protectors of the region seriously. But district development committees, the local governing authorities, are still issuing permits for excavation, leading to confusion over what’s legal and what’s not. The government’s Department of Mines and Geology website notes that mining in the Chure area for the purpose of supplying civil projects is “promising,”—an indication that it allows ongoing mining.

But even if the ban were in full effect, people who live in the Chure region say it’s too little, too late.

Floods and landslides are increasingly common, especially in the Terai Madhesh area of the Chure region, says Birendra Yadav, the chairman of the President Chure-Tarai Madhesh Conservation Development Board. (Terai is often also spelled as Tarai.)

Vast sections of once-arable land are now deserts because erosion and other destructive forces have caused rivers to change course, which also threatens areas where villages have long stood. That’s all due to long-term exploitation of the area’s natural resources.

“We just understood that the Chure destruction was the reason behind land erosion by the river,” says Gopal Kalel, the chairman of Chure Conservation Committee in the Masuriya village area, referring to the Likma Kateni River.

That river has changed course due to the excavation, so it now threatens to encroach section of the village where there are 32 Dalit households on the riverbanks in Masuriya’s Badaipur area. Dalits are among the lowest groups in Nepal’s caste system. 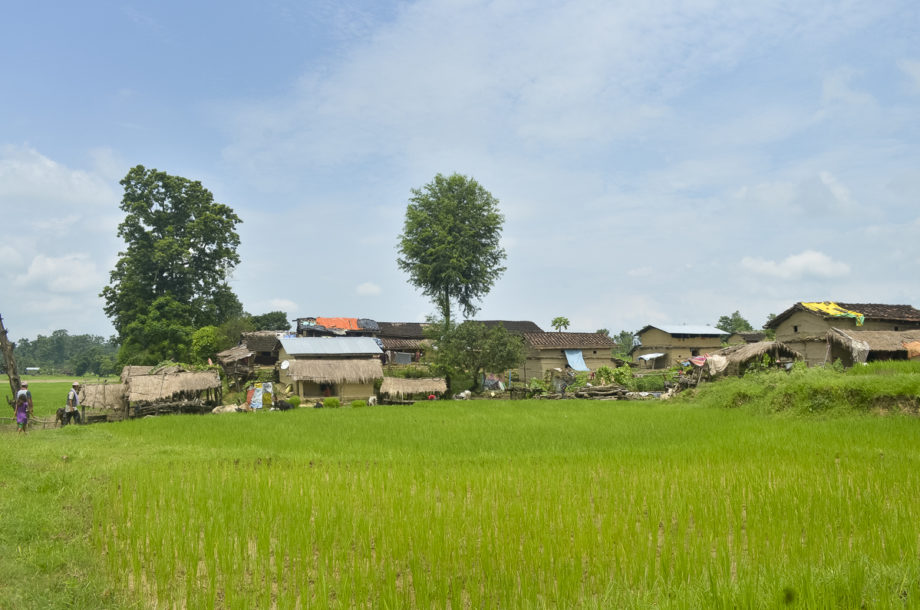 Khalla Tole is a small village near the Likma Kateni River. Local people worry that the river will eventually consume it.

The villagers live in fears since the river has already started to erode land near their homes, Kalel says.

The ban, even if it was honored, won’t stop the erosion, he says, “because the Chure destruction has already caused problems in the village.”

The Chure region’s ecology is fragile and complex. Hillsides in the area, which stretches parallel to the Himalayan mountain range, are naturally so delicate that they easily crumble into valleys and rivers.

“Stones and boulders get swept away even when there is light rain,” says Sabindra Shrestha, a geologist who has studied the Chure area. “These stones and aggregates get deposited in Terai, enlarging rivers and increasing risks of floods.”

The Terai is the plains region of Nepal, at the foot of the Himalayas. The impacts of excavation in such fertile land could impact the whole country, some environmentalists say.

The deforestation and excavation that has already happened could lead to a food shortage throughout Nepal, says Bijay Singh Danuwar, a Chure conservationist, since so much land, once used to grow food, is now parched.

Kalel says the government must take steps to reverse the excavation that has happened in the Chure area if it is to be saved.

“Unless trees are planted in the land rendered desert by the river and embankments are built along the sides of the river immediately, we will continue suffering problems caused by Chure destruction,” he says.

A Mother Fears For Her Land
The Likma Kateni River’s changing course has turned three kattha (about 10,932 square feet, or a quarter of an acre) of Parbati Sunar’s land into desert. She has just five katthas left, and the 30-year-old Masuriya village native worries what will happen next.

“We do not know when there will be a flood and sweep away the remaining land along with the family,” she says. “We stay awake all night out of fear when it’s raining.” 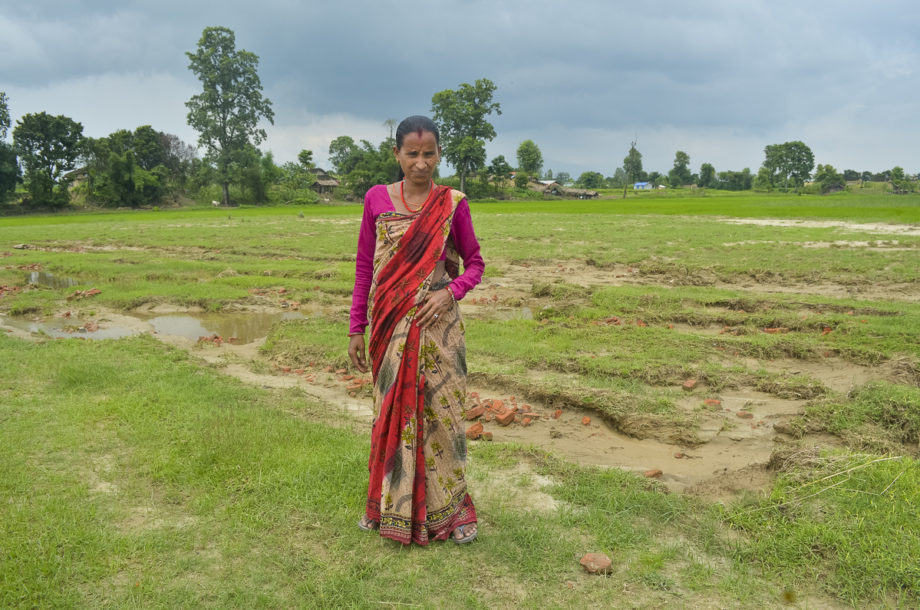 Parbati Sunar, 30, stands on her land near the Likma Kateni River. She worries that the river’s changing course will eventually sweep the land away.

Sunar and her four children live on her husband’s income, which he sends from India, where he works. He earns 12,000 Nepali rupees (about $113) per month, and that’s not enough to buy land in another location, she says.

“I do not know where we would go and what we would eat if the flood turns also this land into desert,” she says.

Despite approving the excavation that caused the river to shift, the government hasn’t built an embankment to save the village of Masuriya. It’s not enough to control stone and gravel excavation now, she says.

“The conservation of Chure is not possible until the problems of the villages impacted by the Chure are resolved,” she says.

A House Unfinished
Sher Bahadur Kalel, 31, is building a four-room house, but since he bought bricks and other materials for the project a year ago, the price of sand and aggregates skyrocketed.

“I do not have a capacity to buy such expensive sand,” he says. 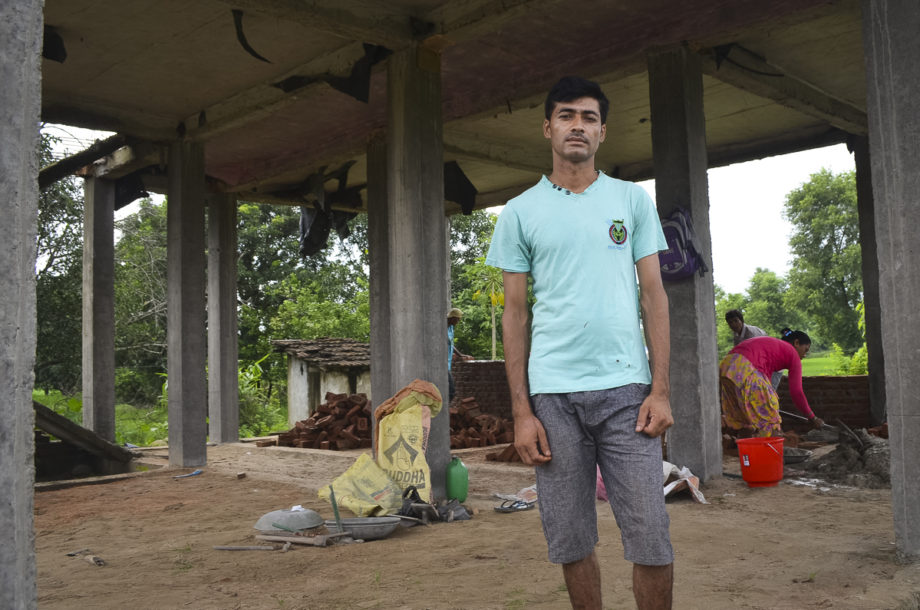 Sher Bahadur Kalel, 31, is building a house for his family, but the cost of construction supplies has gone up so much that he doubts whether he’ll be able to complete it anytime soon.

But now, he’s worried that the bricks he bought last year will be stolen, so he’s moving the project forward, regardless of price, and even though it might take five or six years to complete.

The black market has conquered the construction materials supply since the government set the rules to conserve the Chure, he says. The ban has resulted in a shortage of supplies, pushing their cost way up, he says.

Kalel’s family of eight waiting to live in the new house, but, he says, “it seems my house would not get built anytime soon.”

Waiting to Make Money
The excavation ban has jeopardized the jobs of people in the construction supply industry.

Dipak Ram Chaudhary, 21, a tractor driver who lives in Masuriya, says he made six or seven trips, each with a full tractor, from the Chure area a year ago, but now he makes just two or three trips.

“Sometimes, there is a situation when I have to sit idle throughout a day,” he says. 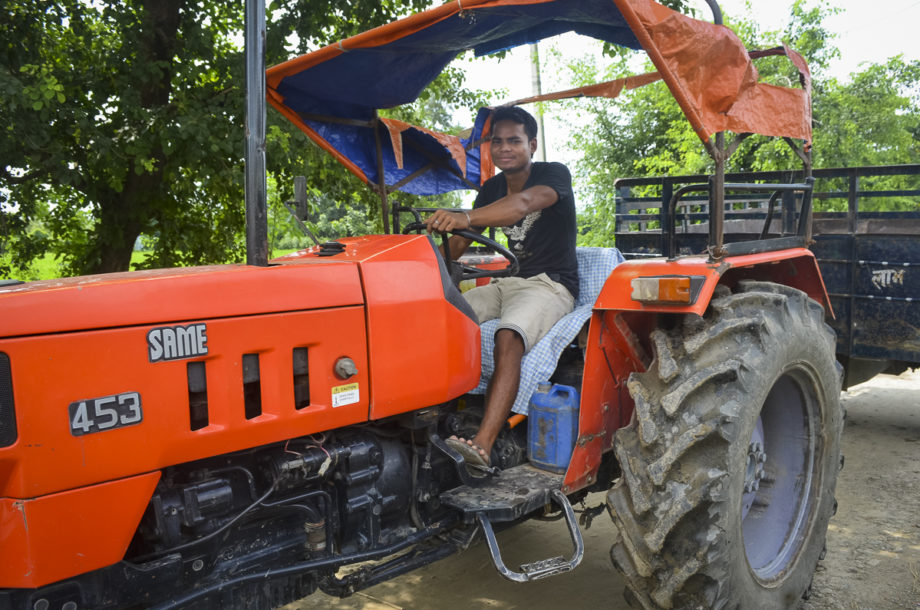 Dipak Ram Chaudhari, 21, drives a tractor that delivers sand and other materials excavated from the Chure area. Local people would chase him away if he didn’t produce the documents showing that he’s there legally.

Chaudhary says he started this work three years ago because he wanted to earn a good living, but now that’s not possible.

People who live in the Chure area police construction suppliers and movers, Chaudhary says, checking for official permits from the District Development Committee.

“If there is not any document….the locals would chase you away,” he says.

A Company in Jeopardy
Workers need to maintain the Likma Kateni River to keep it from rising, says Bhagat Baduwal of Karnali Crusher Industry, an excavating company, in Kailali.

Rocks naturally fall into the water when they topple from nearby hills, he says, causing the water level to rise

“If those stones are not extracted, the river level may rise and inundate the village or settlement,” he says.

It’s not possible to keep the river clear of those rocks by hand, he adds.

“The government should create a favorable working environment by designating us a separate area where we can operate,” he says. 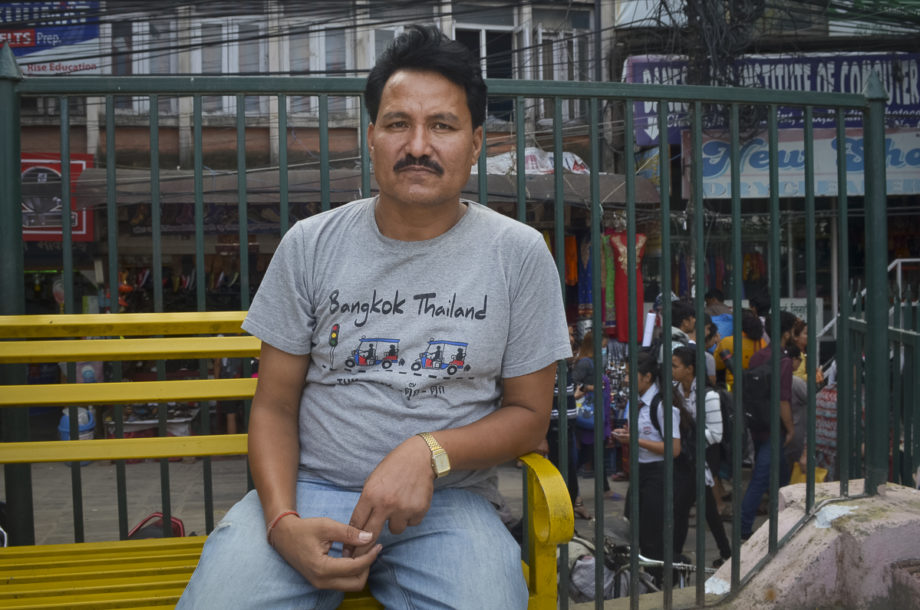 Karnali Crusher Industry has been in operation since May 2015, he says, with an initial investment of 30 million rupees (about $280,000).

But now, that business is in jeopardy. When crusher operators make investment, the government should assure that they do not go bankrupt, he says.