Everest is Empty as Virus Shuts Down Global Tourism Industry

Tourism officials had hoped to lure 2 million tourists to “Visit Nepal” this year, but coronavirus shutdowns have dashed those expensive plans. That’s a blow to the country’s budget. But it’s an even bigger hit for those who work in the shadow of the world’s tallest peak above sea level.

Photo at top: Yeti, the official mascot of Nepal’s “Visit Nepal 2020” tourism campaign, sits in front of the Kaiser Mahal building in Kathmandu. The campaign was launched on January 1 and aimed to generate at least 2 million tourist visits by the end of 2020.

KATHMANDU, NEPAL — Each day during Nepal’s spring trekking season, a great number of tourists travel to Lukla, a village in the country’s eastern Solukhumbu district. From Lukla, they begin the journey of a lifetime: a climb up Mount Everest, the tallest mountain in the world above sea level.

At least, that’s what’s happened in years past.

Pasang Omgchu Sherpa, a 34-year-old international mountain guide from the Solukhumbu district, has some ominous news about the 2020 spring trekking season.

“On 18th March, there were only four tourists who came to Lukla,” Sherpa says. He returned to Kathmandu, Nepal’s capital, that same day.

It was an unfathomable scenario for Nepalese tourism officials who spent two years — and budgeted 300 million Nepalese rupees (NPR) ($2.5 million) — developing the “Visit Nepal 2020” campaign to leverage the country’s claim that it is one of the most popular natural wonders of the world.

“We thought more tourists will come this year and everyone will have a good income,” Sherpa says. “The situation now is just opposite to what we hoped.”

Nepal’s dilemma provides a window into the tremendous blow that the coronavirus has inflicted on the global tourism industry. Nationwide stay-at-home orders, bans on large gatherings in public spaces, closed borders and grounded airlines have all brought hundreds of millions of people to a standstill and stunned tourism officials worldwide who aggressively compete for visitors.

In Nepal, even the most adventurous of travelers — people who undergo years of rigorous physical and mental training hoping to conquer Mount Everest — have been no match for virus concerns. 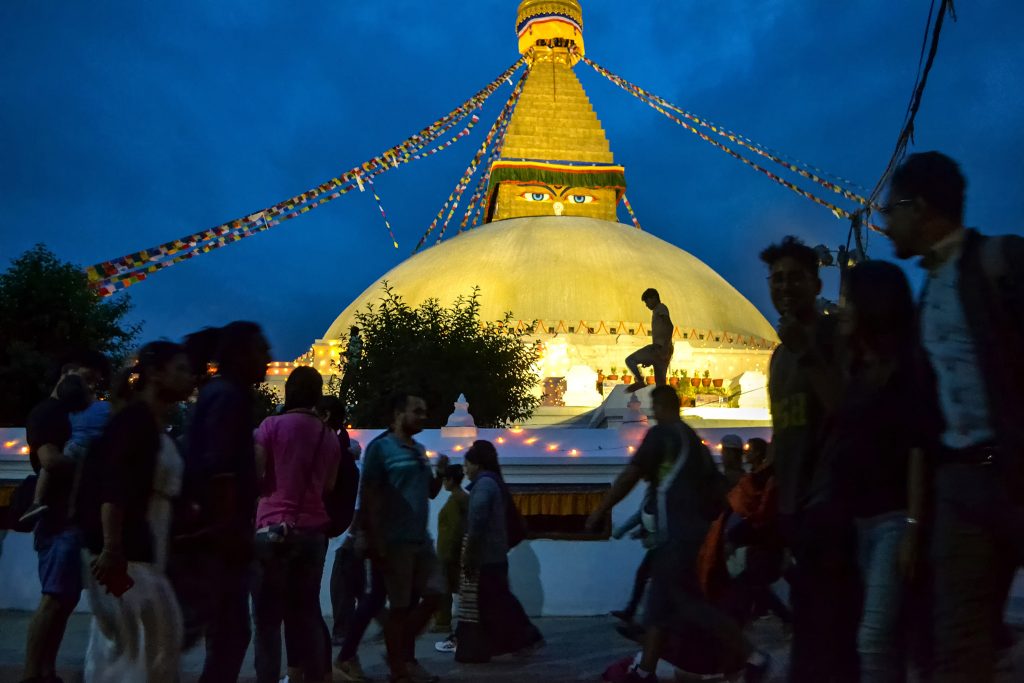 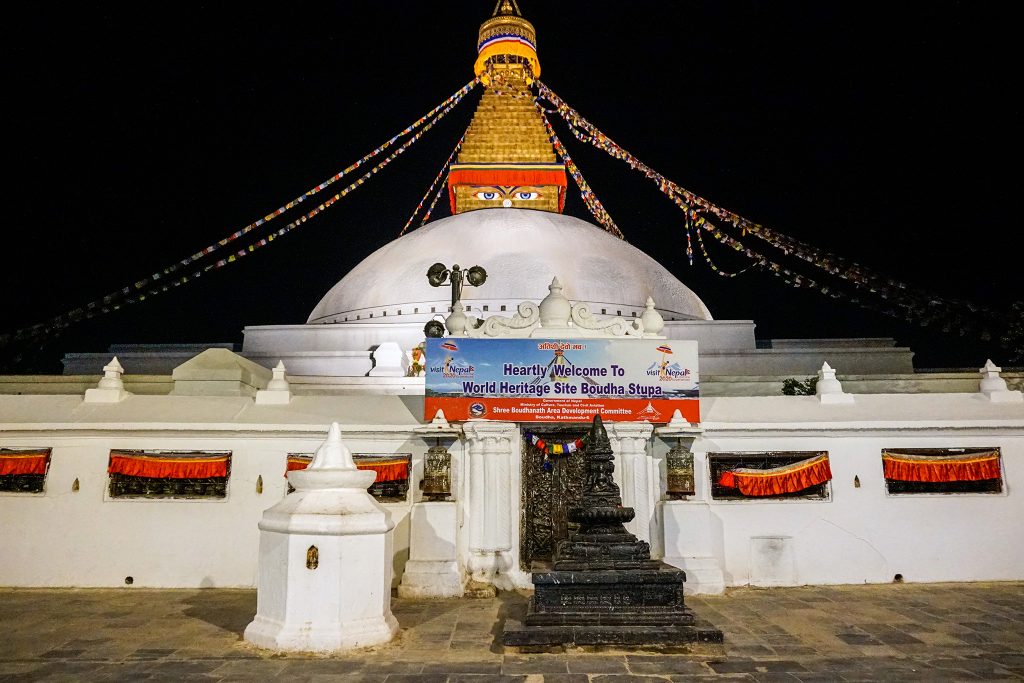 Before the pandemic, the Boudhanath stupa, a spherical monument in Kathmandu’s Boudha neighborhood, was always filled with music and tourists. Today the stupa, which is in one of the four UNESCO World Heritage sites in Nepal, is empty due to the coronavirus lockdown.

The lack of tourists has virtually erased Nepal’s spring trekking season, which typically runs from March through May. The “Visit Nepal 2020” campaign, launched January 1, had aimed to attract 2 million tourists by the end of 2020.

Officials went to extraordinary lengths to try and make “Visit Nepal 2020” a success, says Dhananjay Regmi, CEO of the Nepal Tourism Board.

“We wanted to revive tourism after the earthquake,” Regmi says, referring to the 2015 earthquake that killed nearly 9,000 people. “Investment in hotels increased and banks, too, gave loans for building hotels. Many hotels were built. When the tourists increase, the business will profit.”

But as the coronavirus began capturing global headlines early this year, Nepalese officials took swift precautionary measures. In March, the government suspended trekking permits, visas on arrival and all forms of entry into Nepal. A nationwide lockdown has been extended until May 7. As of May 2, Nepal reported 59 confirmed cases of COVID-19, the disease caused by the coronavirus, and no deaths.

For trekking industry employees, a relatively low number of COVID-19 cases in Nepal brings no comfort. 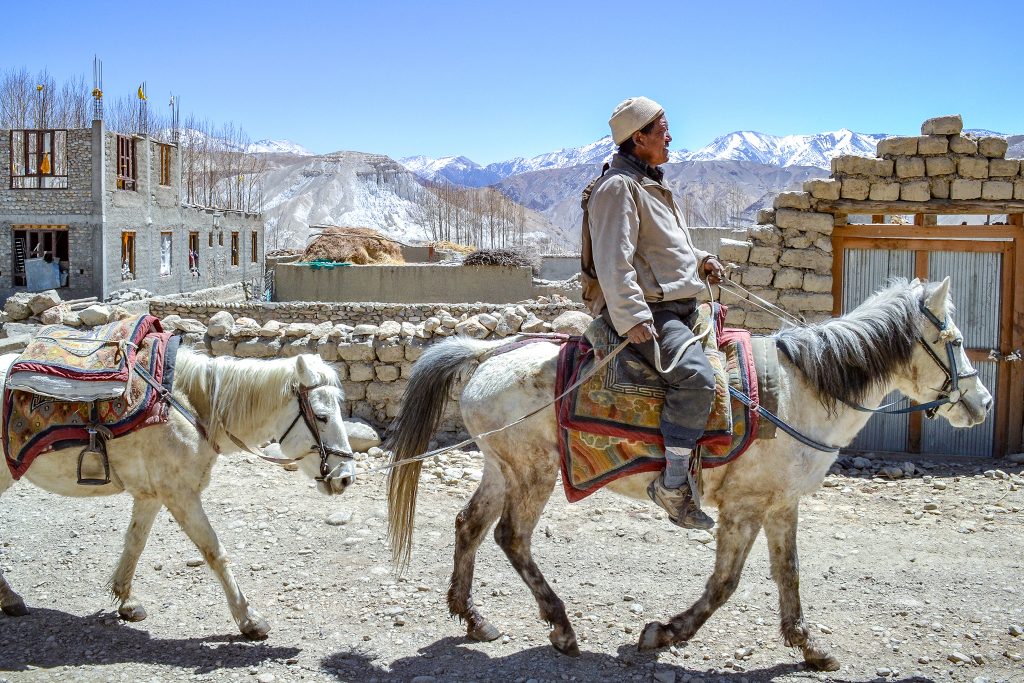 June 2017: Chimmi Rinzing Gurung, 50, and his horses travel around Lo Manthang village in Upper Mustang, a region in northwestern Nepal. Gurung charges tourists 1,500 Nepalese rupees (about $15) for a round-trip horseback ride to their destination.

The loss of trekking and mountaineering income in Nepal due to the coronavirus is just part of the bleak portrait of Nepal’s tourism industry for the near term.

In 2018, most of Nepal’s tourists — 60% — visited for holiday and pleasure, compared to 16% for such adventures as trekking and mountaineering.

By 2019, travel and tourism comprised 6.7% of the country’s gross domestic product of $28.6 billion, according to World Travel & Tourism Council. World Bank data analyzed by Global Press Journal suggests that revenue from tourists engaged in trekking and mountaineering activities, on average, generates about 1% of Nepal’s annual GDP.

But Khum Bahadur Subedi, president of the Trekking Agencies’ Association of Nepal, disagrees. He estimates that the tourism sector contributes 10% to the country’s GDP. And Subedi insists that trekking and mountaineering contribute 4%.

“This is because not all expenses made by the tourists are seen. There are expenditures made by tourists that are not recorded by the government,” he says.

Whether it’s 1% or 4%, that kind of income drain for a country of Nepal’s size is likely to have a significant impact on national budget decisions.

For individuals, the impact is much more profound. 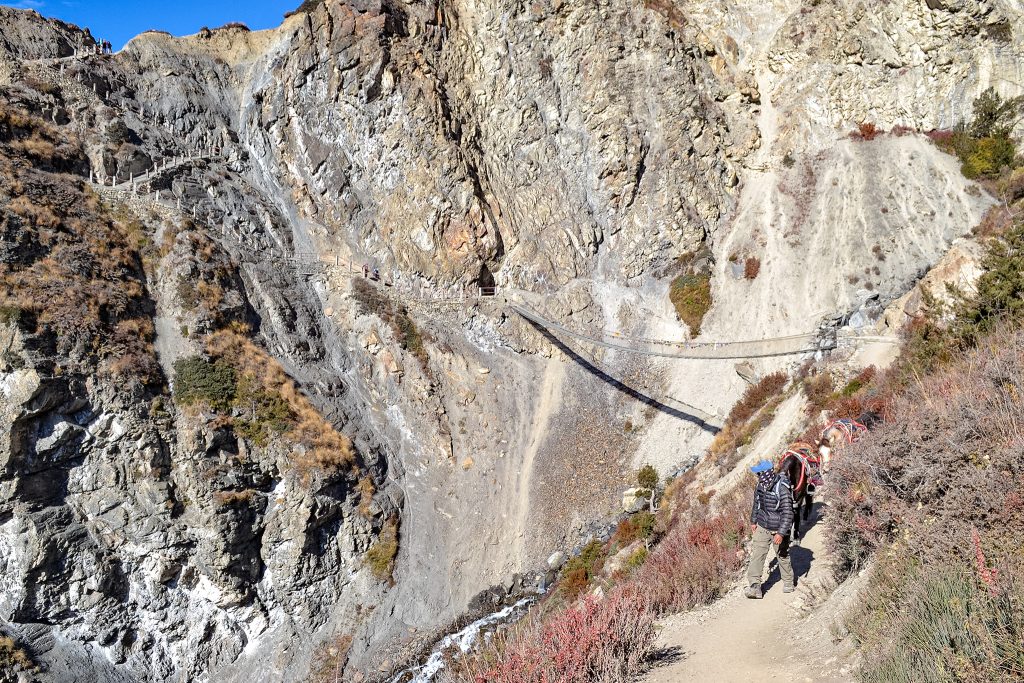 November 2018: Sukh Bahadur Gurung returns to his village, Khangsar, after delivering supplies to a hotel at the Tilicho Base Camp in Manang, Nepal. Gurung makes deliveries during the fall and spring, when trekkers visit Tilicho Lake.

He had big plans for his 2020 earnings. “I wanted to open a grocery shop with the money I made from this season,” he says.

But this year, instead of leading groups of mountain climbers, Baraili is tilling potatoes in his family’s fields with his sister.

Baraili couldn’t complete his own studies, but he wants his three younger siblings to get their education. Annually, he spends about 48,000 NPR ($396) for their school fees. Though schools in Nepal are currently closed due to the coronavirus, he worries about how he’ll come up with those funds when they reopen.

For now, Baraili plans to borrow 80,000 NPR ($660) from friends to help cover his family’s expenses, but says they want as much as 5% interest repaid on the loans.

“I have never borrowed money before,” he says. “I have responsibilities and I have no money. I am very stressed because I don’t know what to do.” 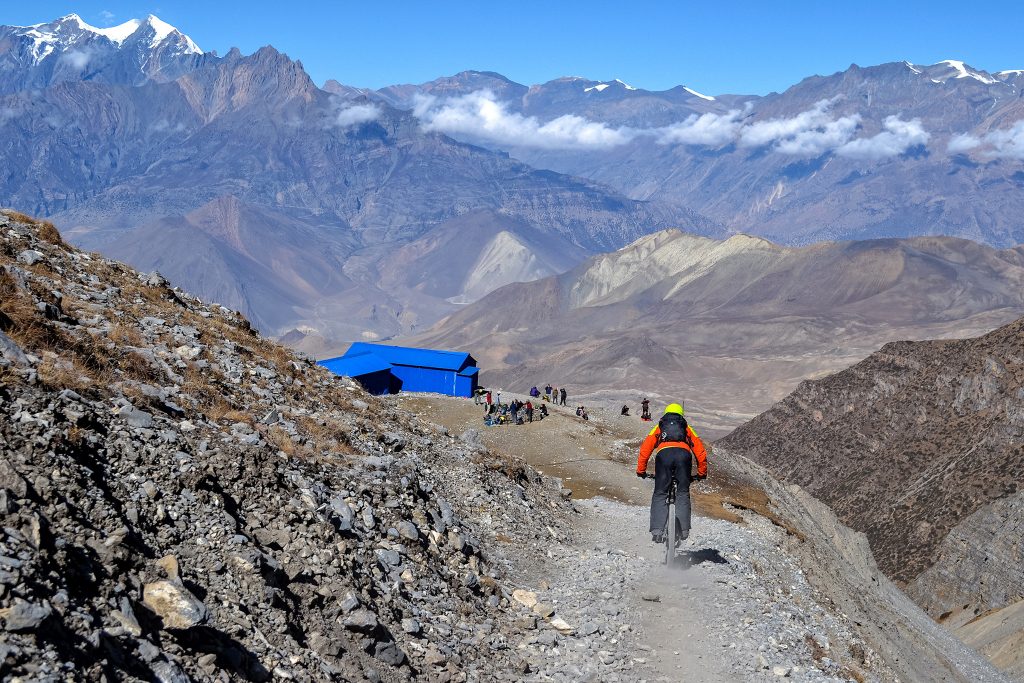 International mountain guides like Sherpa often go to European countries to work during Nepal’s trekking offseason. But as the coronavirus continues its global spread, Sherpa fears all his work opportunities this year will disappear.

“In May, we usually apply for visas and get our ticketing done,” he says. “We are in lockdown. I don’t think I will be able to go out for work this year.”

That’s the irony of mastering an elite skill like becoming a trekking guide, says Biswo Poudel, an economist and visiting associate professor at Kathmandu University.

“Some of the people working in the tourism industry may not have other skills. They cannot switch to another field quickly,” he says.

Poudel thinks Nepal tourism officials should be more proactive. There have only been two big campaigns before “Visit Nepal 2020” — one in 1998 and one in 2011. That’s not enough, he says.

“[It] should be a continuous campaign — not just ‘Visit Nepal,’ but we should have other tourism campaigns too,” he says. Nepal is home to four UNESCO World Heritage sites, which Poudel thinks should be enough incentive for Nepalese officials to produce multiple campaigns much more often.

Whatever strategy tourism officials come up with, they acknowledge they must provide solutions soon for the people who are the backbone of the industry.

“Porters’ and guides’ income is affected the most,” says Regmi, the tourism board CEO. “We have to engage them so they can survive this crisis.”