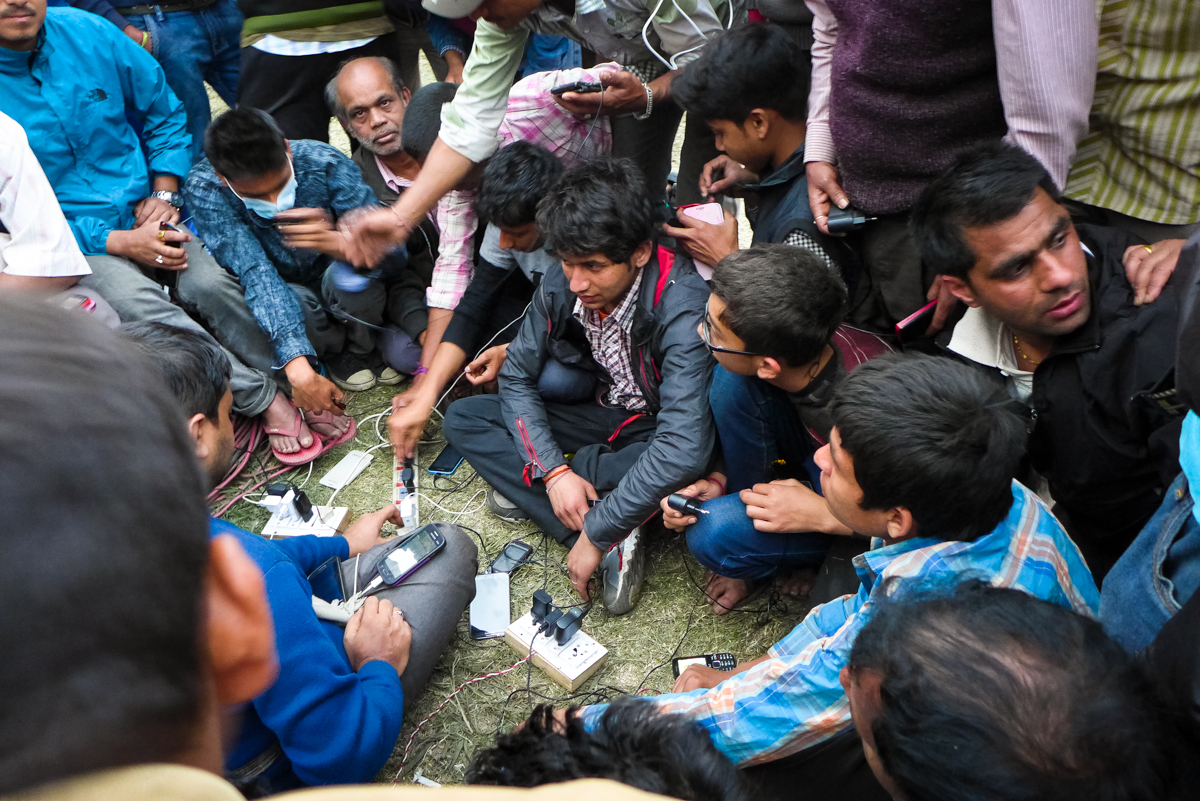 KATHMANDU, NEPAL –Nepal’s earthquake and its aftershocks have left survivors scared, and desperate for shelter and food. Most worry about far-off relatives. Many complain that the government is neglecting them in their time of need.

Some of the survivors spoke with Global Press Journal’s Yam Kumari Kandel in Kathmandu about where they were when the quake hit, and how they’re managing now.

“I was at my home with my four kids, including my 26-day-old son,” B.K. says. “I felt a shock but could not understand what was happening. Without thinking, I held my kids and ran out of the room to save our lives.”

B.K. says she cried for help but no one could help her because everyone was looking for a safe place for themselves and their families. Like many others, she found herself living in a tent in Tundikhel, a military parade ground. She says it was dark and cold. She worries about the health of her newborn baby.

“Now I am homeless,” she says.

She doesn’t have any proper food to eat, she says.

“I am getting weaker and weaker day by day.”

Rai was taking a bath when she felt the shaking.

“I realized it was an earthquake,” she says. “I am thankful to a training that I had taken a couple of years ago about the precautions during a disaster like an earthquake.”

Rai tucked her head in her hands and knelt in an open space in the bathroom. When the shaking ended, she left her house and called her family, which lives in a remote area of the country.

Devi was outside near her home when the earthquake began. People began to run frantically, she says. The sharp sounds of crumbling buildings hurt her ears.

“I saw a man jumping from the third floor,” she says. “Within no time, I lost my consciousness and fell on the ground. When I woke up about 15 minutes later … some people helped me stand and brought me to a safer place.”

Devi followed a crowd of people to Tundikhel. It was then that she realized that many people had died.

“It has become hard for me to believe the damages caused by [the] earthquake.”

Pariyar had traveled to Kathmandu from the city of Janakpur in southeastern Nepal for surgery on her uterus. Her doctors told her to rest after her procedure, but that’s not possible now. She ran from her room and fell from a ladder.

“My wound is not healing now,” Pariyar says.

Ramesh was waiting to be admitted to school when he felt the earthquake.

“But now I have no school or books to study,” he says. “Schools are indefinitely closed.”

Ramesh says he wishes he was in his family’s village in Nepal’s western region, which he deems safer than Kathmandu.

Subedi was in an exam hall to take an English language test when the building began shaking.

“I felt an unusual shock on my feet, and chairs moving,” Subedi says.

The students raced for the door, but it was locked and there was no guard nearby to open it.

“We managed to break the lock and come out of the building,” he says. “I had thought I wouldn’t live, but due to God’s grace I am here, waiting for better days to come.”

Rokaya came to Kathmandu from Jumla in western Nepal for a treatment for his blindness, but the earthquake came before he could go to the hospital.

“I wish I could have operated my eyes and regained my vision, but the due date is pending. I am left with less hope,” he says.

Now, he is stuck in Kathmandu with his son Prem, and the two are running out of money.

“I have 25 stitches on my head, but I cannot explain in words how that happened to me,” Rokaya says.

A corner of the ceiling in his room collapsed on him in the earthquake, he says. Rokaya discovered later that someone took him to the hospital.

“My wife kept searching for me and found me at the hospital,” he says.

Rokaya and his wife operated a small shop, but that has been destroyed. Now, he’s not sure how he’ll live. He says he thinks the government is neglecting him and others who have lost everything.

“I am afraid to return back to my home,” he says.

“We were on the verge of celebrating the birthday of our daughter,” Moktan says.

She was preparing to go shopping when the earthquake hit.

“I had no option left other than running out of my room with my daughter in my arm,” she says.

Moktan fell from the ladder leading out of her wood and mud house, but she managed to stand and run away.

“I am missing my husband,” she says.

He is a migrant worker in Qatar.

“We have transferred the quake-affected victims to different temporary settlements that are safer,” Bam says. “We have sent adequate tents, food, water and other logistics to the needy people in remote villages. We are focusing on providing relief to the people trapped in rural areas. Once we move the rural people to a safer place, we will then focus on the people in town areas.”