Skip to main content
The story you are reading was published on Thursday May 14, 2015. To read more recent stories click here. 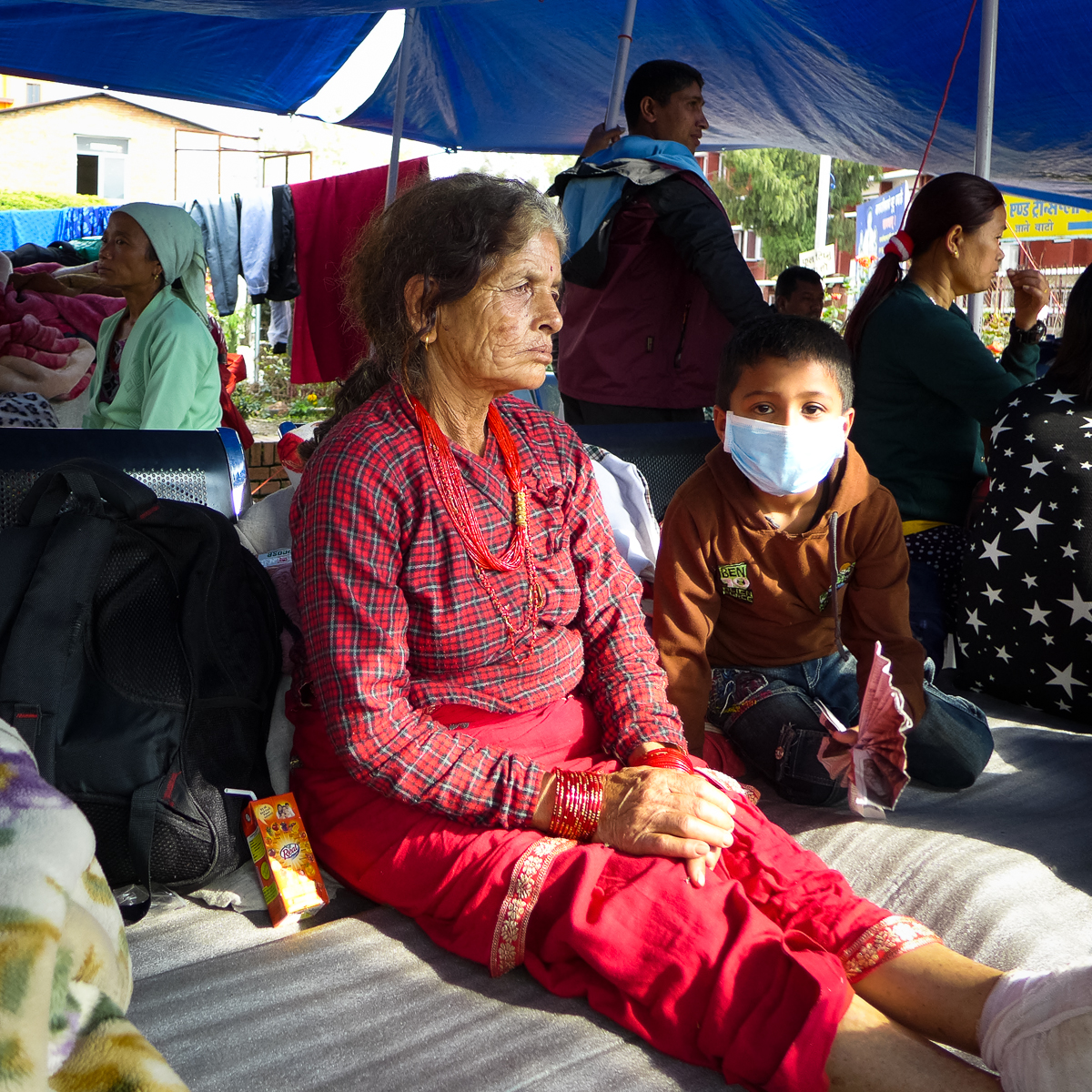 KATHMANDU, NEPAL – Jagat Kapali, 56, sits in a chair at Bir Hospital; all the beds are occupied by people injured in the earthquakes that have rocked the country in recent weeks.

Kapali fractured his right hand about a week after the first quake when he fell down a staircase. He was scrambling to flee his house during what he perceived to be an aftershock.

A 7.8-magnitude earthquake struck Nepal on April 25, a 7.3-magnitude quake jolted Kathmandu and surrounding districts on May 12, and aftershocks have rattled the region for weeks, but the ground was still when Kapali fell down the stairs, says his nephew, Rohan Kapali.

Jagat Kapali ran for the stairs because he was having a flashback. The quake he fled occurred only in his mind.

When lucid, Jagat Kapali can recall how he experienced that moment in his home in Dallu, a residential section of Kathmandu.

“It was 8 in the morning, and I was looking at my fish in my aquarium,” he says. “Right then, an earthquake shook my house and I felt like it was crumbling down. Therefore I ran and fell down the stairs.”

Sometimes, though, Jagat Kapali is confused about what is happening.

“Nothing has happened to me,” he says. “Why was I brought to the hospital? It’s now time for an earthquake. Let me go home and take care of my family.”

While hospitals are crowded with patients who sustained crush injuries in the quakes, an untold number of people – Jagat Kapali among them – also exhibit psychological problems.

Bir Hospital has treated many patients with mental health problems stemming from the quakes, says Dr. Pratap Bhandari, an orthopedic doctor who treated Jagat Kapali’s hand. Unfortunately, the hospital isn’t equipped to treat them, he says.

Even before the quakes, Nepalese had limited access to mental health care. But in their wake, the government is ill-equipped to respond to the needs of an untold number of people experiencing psychological distress.

About 8,000 people died in the April 25 earthquake, according to the most recent numbers from Nepal’s Ministry of Home Affairs. Hundreds of thousands of homes were destroyed or damaged.

The May 12 earthquake caused at least 37 deaths and more than a thousand injuries, Nepal’s Department of Information reports.

Jagat Kapali, who worked in a tailoring shop, had no psychological problems before the first earthquake, Rohan Kapali says.

“But since the earthquake, he has not been able to sleep at nights,” Rohan Kapali says. “He started to laugh for no reason and speak randomly from the fourth day of the earthquake. He also started running to and fro intermittently.”

Jagat Kapali’s wife and two sons were not injured in the earthquake, but he watched as his sister-in-law and neighbors were buried under a collapsing house. He saw crumbled buildings in his neighborhood. Then, he watched as quake events were replayed repeatedly on television. He lost his appetite. He couldn’t sleep.

“I feel like we are hit by an earthquake time and again, and my house is dancing and I am swinging,” he says. “I cannot stand still in the same place.”

After treating Jagat Kapali’s hand, doctors prescribed painkillers and told him to return in a week for a checkup.

But nobody asked about his mental health, Rohan Kapali says.

Bhandari, the orthopedic doctor, says he was aware that Jagat Kapali was suffering psychologically.

“However, we have to cure his bodily ailments first, and only after he is physically fit we will refer him to a psychologist,” Bhandari says.

Rohan Kapali does not want to take his uncle there.

“I want to keep my maternal uncle at home,” Rohan Kapali says. “If he gets very difficult to manage, I will buy sleeping tablets at a nearby pharmacy and give them to him.”

Psychosis, depression, tension and fatigue are all symptoms of mental health problems, he says. Some people are experiencing formally recognized psychological disorders, including acute stress reaction and post-traumatic stress disorder.

“Everyone looks frightened and terrified because of the earthquake,” he says.

A population’s psychological problems become evident in the two weeks after a disaster, Ojha says.

For some three-fourths of those affected, the psychological impact of a disaster diminishes over the following three to six months, but a quarter of affected people face psychological stress for a year or more after the disaster, Ojha says.

“If such terrified people do not get counseling and care within a month, they could face more serious psychological problems, and its effect can be gradually seen in the family, community, and then in the whole country,” Ojha says.

Nepal, a nation of nearly 30 million people, has about 110 psychiatrists and about 400 general counselors, Ojha says. Mental Hospital Lagankhel in Lalitpur is the nation’s only psychiatric hospital.

“In the context of magnitude of affected people, the available mental health care and services are too meager,” Ojha says. “The government has not yet put it in priority. This is a really challenging task to address the actual need.” 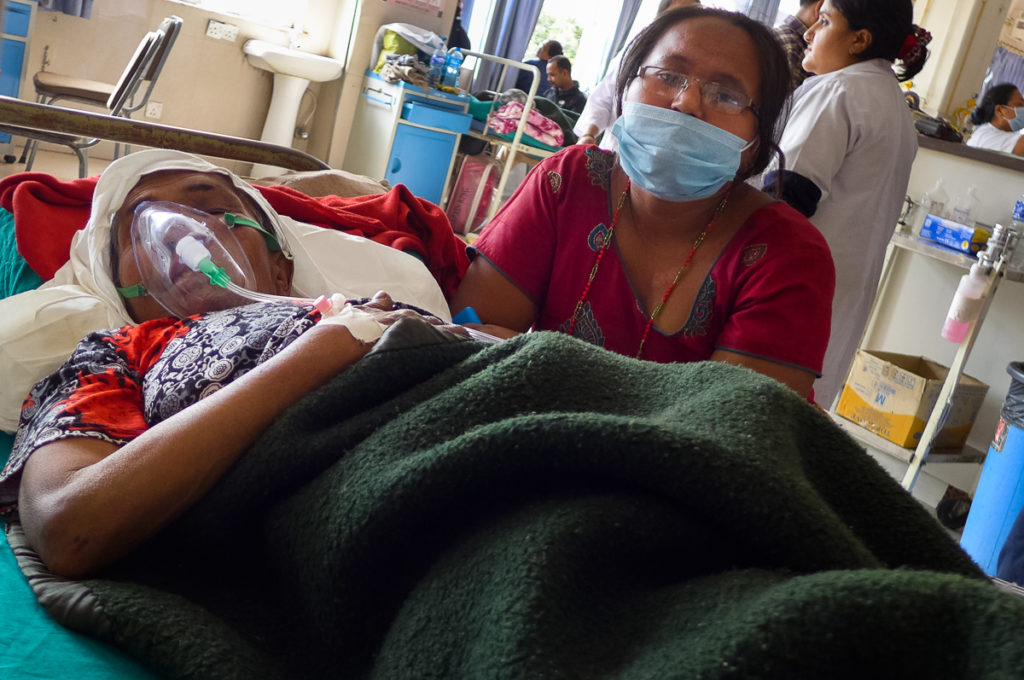 Padhma Maya Shrestha, 77, of Sindhupalchowk, was buried under rubble when her house collapsed. Her daughter, Kamala Shrestah, 30, accompanies her at Bir Hospital in Kathmandu, the nation’s capital. 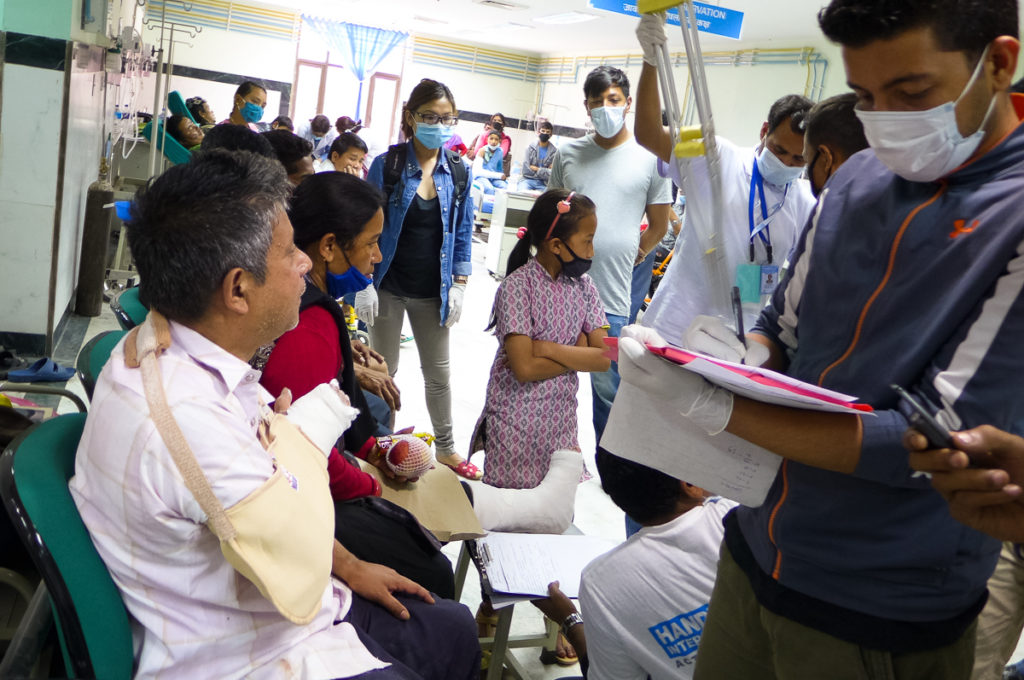 Jagat Kapali, 56, seated at left, broke his hand six days after the April 25 earthquake when, while experiencing a flashback, he fell down the stairs attempting to flee his home. 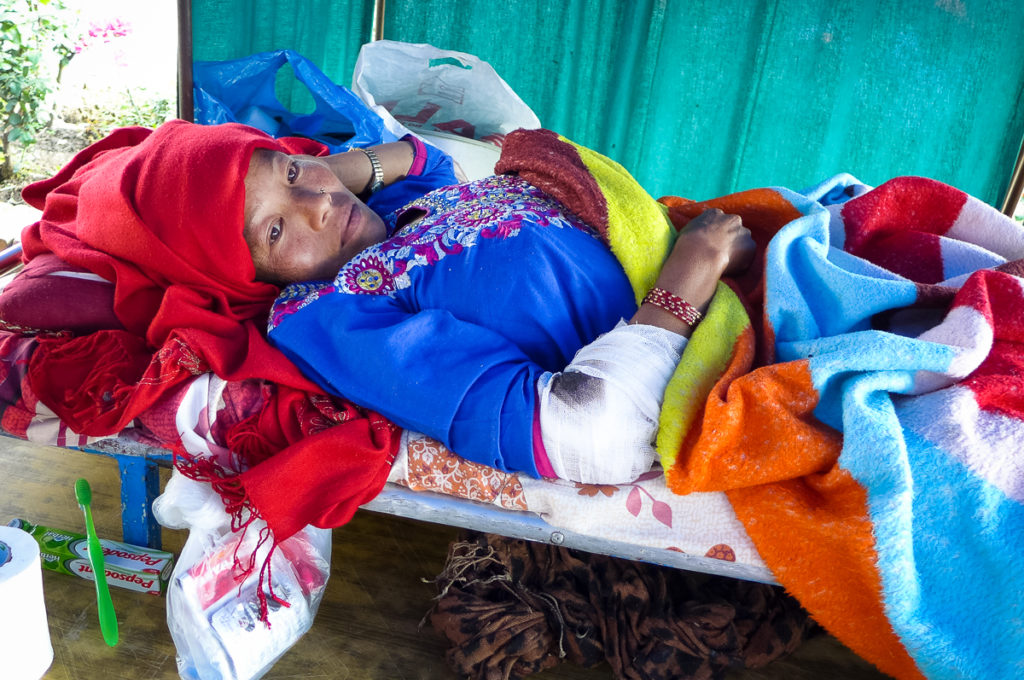 Sunita Kunwar, 30, of Sindhupalchowk district, recovers from quake injuries beneath a tarpaulin on the grounds of Bir Hospital, which has no available beds. Kunwar, whose back and legs were injured when she was buried in rubble in the April 25 earthquake, also incurred a psychological wound: She was traumatized when her daughter died in the quake. 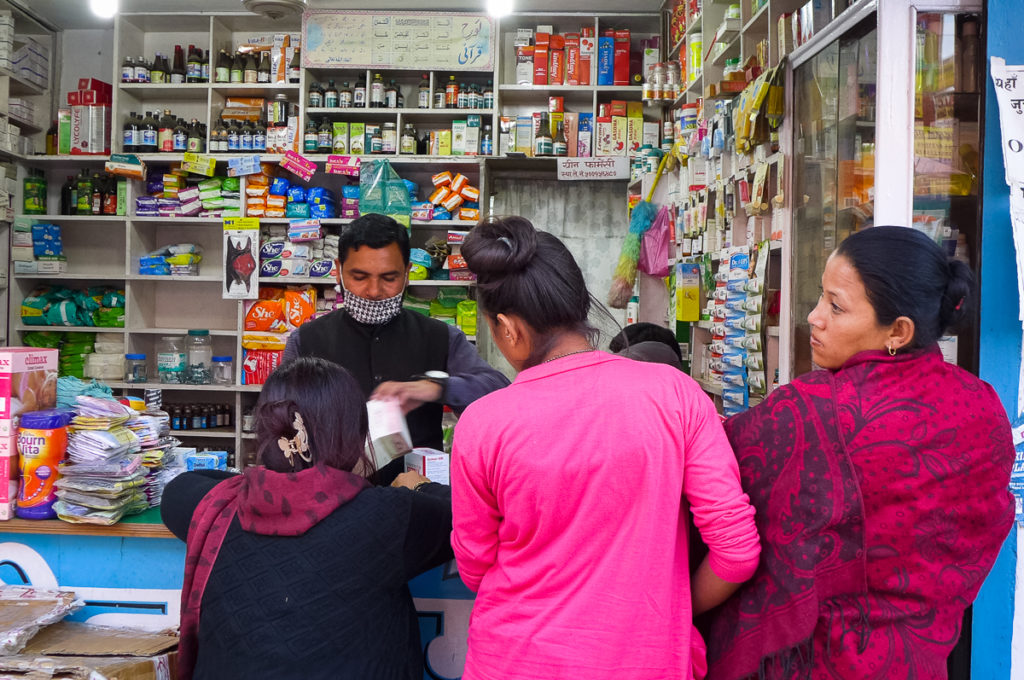 Earthquake survivors in search of relief from stress-related problems purchase sleeping pills and appetite enhancers at a Kathmandu pharmacy. 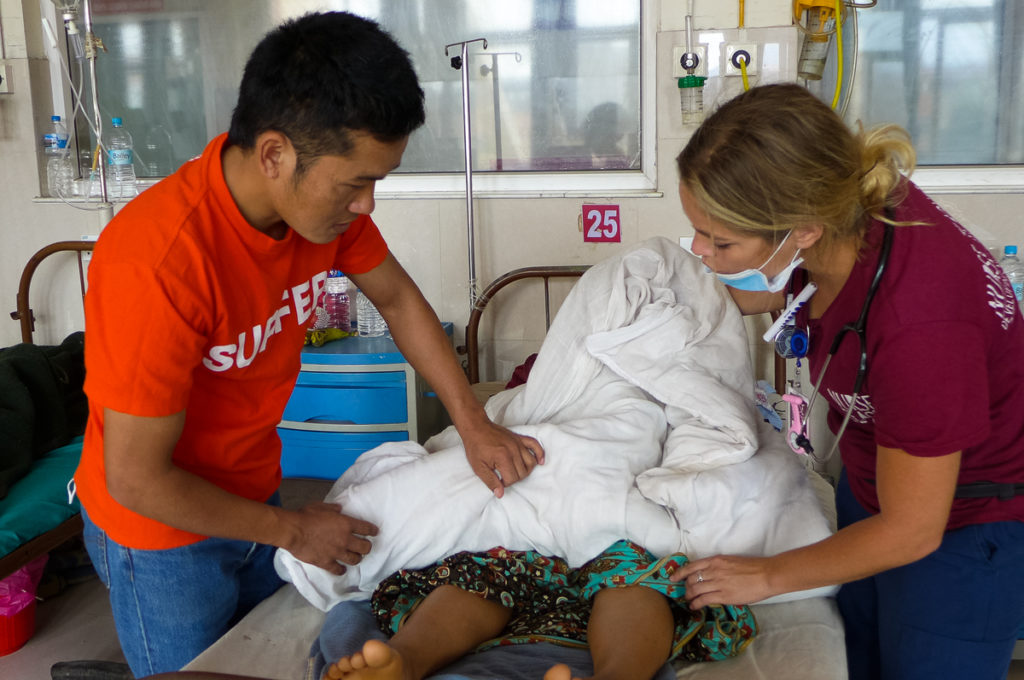 Medical professionals examine Sukrani Rai, 24, who was injured in the collapse of a seven-story building in the April 25 quake. 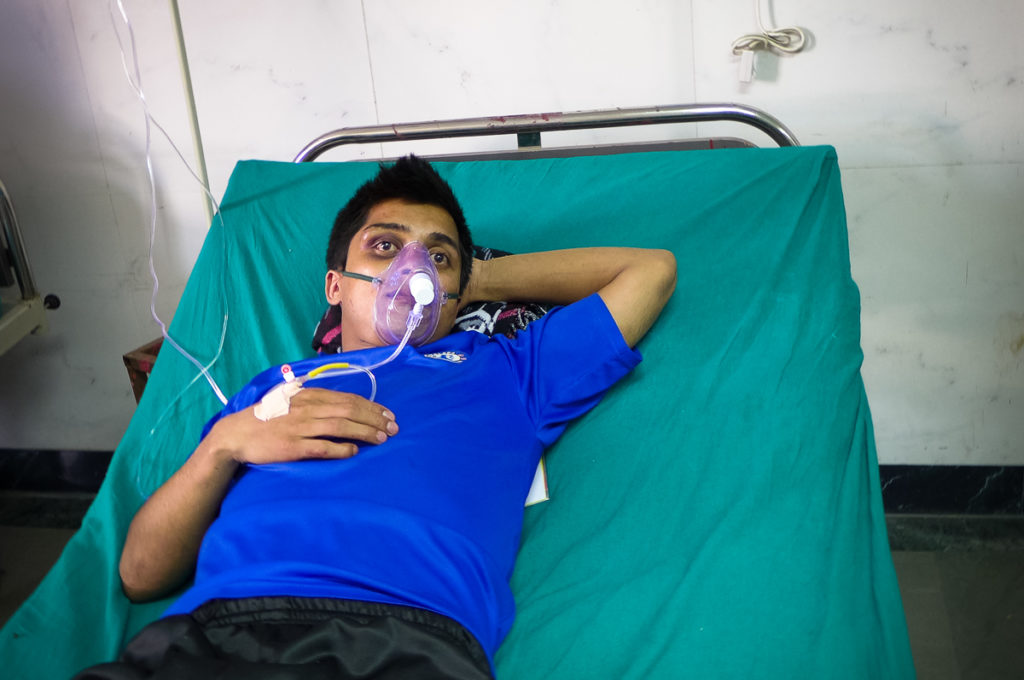 Binod Raj Ganika, 24, was taken to Bir Hospital in Kathmandu on May 1 after he showed signs of mental instability. He laughs and cries intermittently and has a rapid heartbeat. His wife, Januka Ganika, is nine months pregnant. 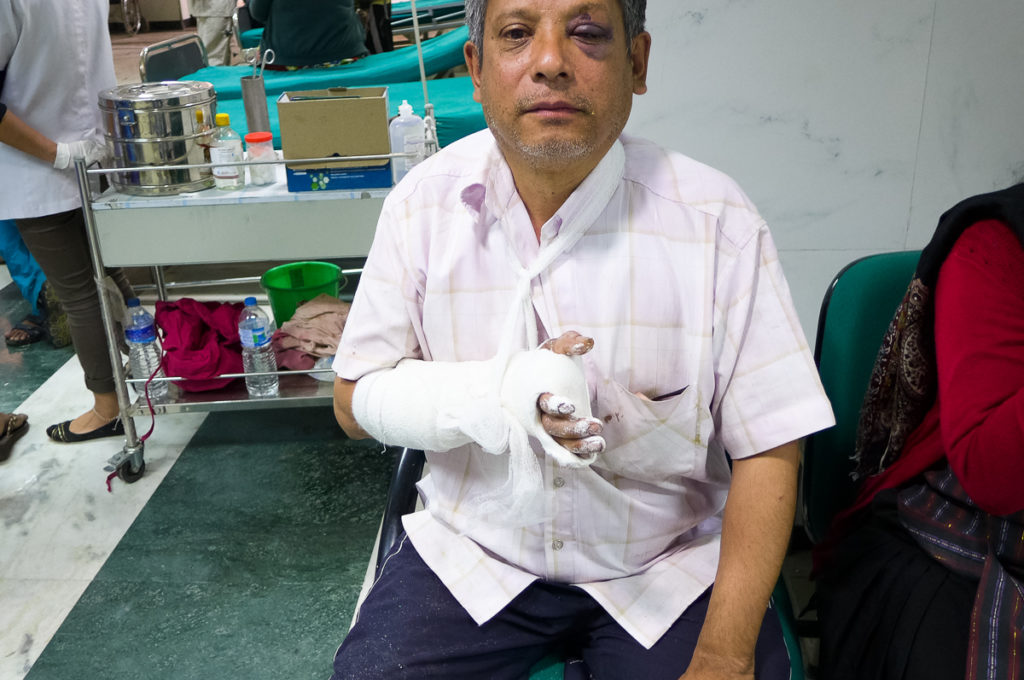 Jagat Kapali, 56, broke his hand on May 1, a week after the first and more powerful earthquake, when he attempted to flee his home during a flashback. At times, he says he knows how he injured his hand; at other times, he remembers nothing about it. 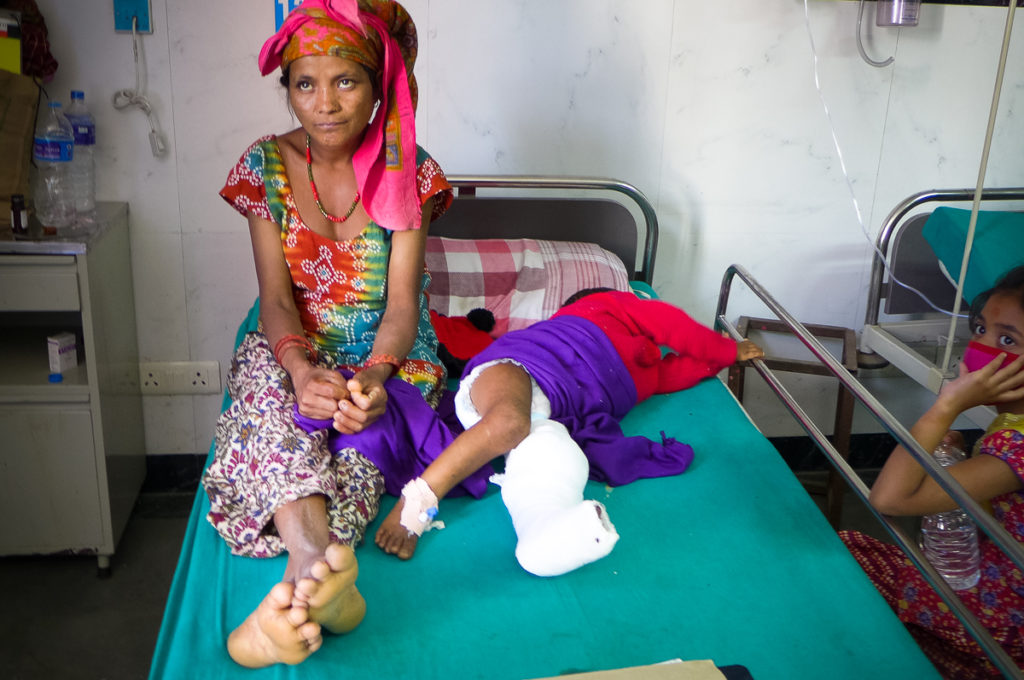 Maiya B.K., 44, of Sindhupalchowk, is at the hospital with her 3-year-old son, who was injured when the family’s home collapsed in the April 25 earthquake. 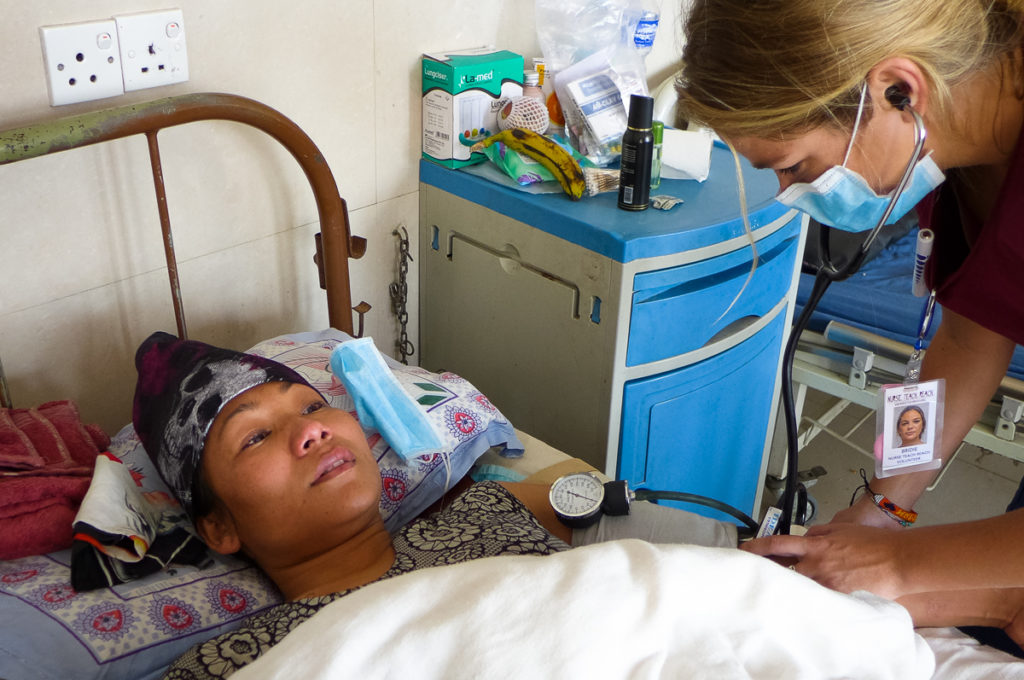 A nurse attends Sukrani Rai after she screamed out of fear. Rai lost 28 friends prayer mates when a building collapsed on them in the April 25 earthquake.

Sukrani Rai, 24, was at a weekly prayer service when the April 25 earthquake hit. Half-buried in the rubble of a seven-story building, Rai was rescued, but 28 of her friends died.

Now she lies in a bed in the observation unit of Tribhuvan University Teaching Hospital, where she is being treated for a broken spine and hand. When a flashback strikes, she screams with fear and cries; terrified, she finds herself soaked with sweat.

Rai’s husband, Dhanendra Raj Tumbapo, watches her closely. When he realizes he can’t control her, he runs to the nurses’ station.

“My wife is getting critical; please look at her,” he pleads.

“Everything is normal, but she requires counseling,” the nurse says. “She needs to see a psychiatrist immediately.”

When Rai is calm, she is despondent.

“I had dreamed of being a fashion designer,” she says. “All my well-wishers and friends died in this earthquake. I do not see any reason why I should be alive.”

Many earthquake survivors say they have lost hope, says Dr. Gaurab Bhattarai, a second-year resident in the psychiatry department of Tribhuvan University Teaching Hospital’s Institute of Medicine. Survivors say they feel asphyxiated. They fear another earthquake will kill them. They’ve lost their appetites. They feel constantly afraid.

“Some scream for no reason,” Bhattarai says. “For such patients, we go to their beds and provide counseling. What can we do about the patients who have not sought medical help?”

Some survivors self-medicate. Aktar Ali, a pharmacist at Green Pharmacy at Maharajgunj, Kathmandu, says customers have been requesting medicine to help them cope with fear.

Their symptoms include screaming, shouting and wailing. Ali sells sleeping pills to some of these customers. Others he refers to a doctor.

“Such is the situation of mental problem among people,” Ali says. “If the government doesn’t focus on the mental health care, what would the situation be?”

A survivor of the 8.0-magnitude earthquake that struck Nepal in 1934 knows just how long such a disaster can live on in the mind.

“Even after the end of the aftershocks, I had flashbacks of earthquakes for years,” says Maiya Dixit, who is 100 years old.

But the April 25 quake caused her more emotional distress, she says. Now, she struggles even to bathe and change her clothes.

Dhulikhel Hospital at Kavrepalanchok, a neighboring district of Kathmandu, has treated about 1,700 injured people since the first quake hit. Nearly all of them have shown evidence of trauma and depression, says the hospital’s administrative director, Dr. Rajendra Koju.

People who lost loved ones and witnessed deep devastation could struggle with trauma for the rest of their lives, Koju says.

“Psychological counseling may help them to overcome, but will not end the trauma,” says Koju, a cardiologist.

The health care community must focus on treating physical injuries, says Dr. Gunaraj Lohani, a spokesman for the Ministry of Health and Population.

“Other complications, like psychological problems, could be dealt separately after the recovery of the physical injuries,” Lohani says.

“But we have not allocated a separate budget for mental health,” Dhakal says. “The government is doing the rescue and relief work. The primary focus is on physical health, and food and shelter.”

By mid-May, it had provided counseling and medication to nearly 500 people with symptoms of traumatic stress, Ojha says.

“It is certain that the number of patients will increase every day, but not all hospitals have mechanisms to deal with mental health care,” she says.

The Center for Mental Health and Counseling-Nepal will deploy two or three people to each of the highly affected areas, including Kavre, Gorkha, Dhading, Kathmandu, Bhaktapur, Dolakha and Ramechhap, to provide free counseling and medicine, says Dr. Pashupati Mahat, senior clinical psychologist at the center. People in distress can also get free mental health care at the center in Kathmandu from 9 a.m. to 5 p.m.

Jagat Kapali knows his hand will heal. He’s not sure how he’ll recover his mental health.

“I thought my life was fine until it was shaken by the earthquake,” Jagat Kapali says. “Today, I feel [it is] difficult to breath, and I am overwhelmed thinking how I am going to spend my days and nights.”