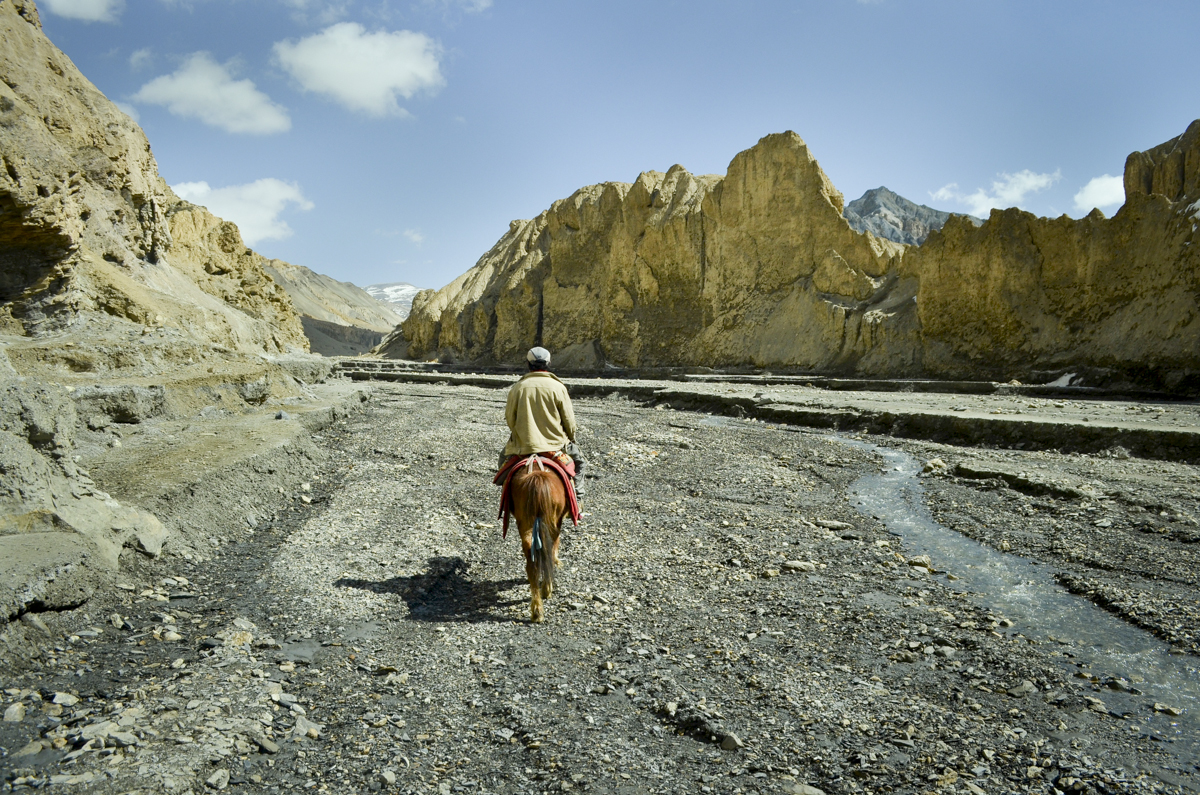 SAMZONG, NEPAL – Every resident of Samzong village is getting ready to move.

The remote village in Upper Mustang, a region in northwestern Nepal, sits on the Tibetan border. There are no roads, just rough paths that lead to the village, which is not accessible by car. There are no hospitals, schools or police stations either.

There also is not enough water.

Residents of Samzong once depended on agriculture, but a lack of rain and ever-dwindling crop yields have made life here impossible. To survive in the short term, some have shifted to rearing cattle to sell them or to harvest their wool. But by the end of summer 2014, the village will be empty.

Without sufficient water to drink or to irrigate their fields, residents of Samzong are preparing to abandon the village. In 2014, all 17 households will begin building new homes in a nearby village called Namashung.

Namashung is 4 kilometers (2.5 miles) northeast of Lo Manthang, the capital of Mustang district. It sits on the bank of Kali Gandaki, also known as the Gandaki River, which is the main river of the valley.

The land in Namashung belongs to the ancient royal family of Mustang, also known as the forbidden kingdom, according to the Lo-Mustang Foundation, a Nepalese nonprofit organization dedicated to the development of Upper Mustang. The royal family has agreed to part with the land so that residents of Samzong can relocate.

Construction of the new homes will begin in March 2014. All residents are planning to leave the area by summer 2014.

The decision for residents to move to Namashung came after a November 2012 study that sought to find “a holistic response to climate change stress on high-altitude Himalayan settlements.” The report notes the strain on the Samzong Khola, the river that flows through Samzong.

“Agricultural activities in Samzong are low productive and almost solely dependent on the perennial flow of Samzong Khola,” according to a study done by Kam For Sud, a Swiss-Nepalese partnership working for sustainable development, solidarity and peace; University of Applied Sciences and Arts of Southern Switzerland; and the Lo-Mustang Foundation.

A drastic rise in temperature because of climate change and insignificant changes in precipitation volumes mean a decrease in snow cover in Samzong, according to the report. The expected increase in winds and subsequent sand and dust deposit on snow and glaciers will also cause them to melt faster. 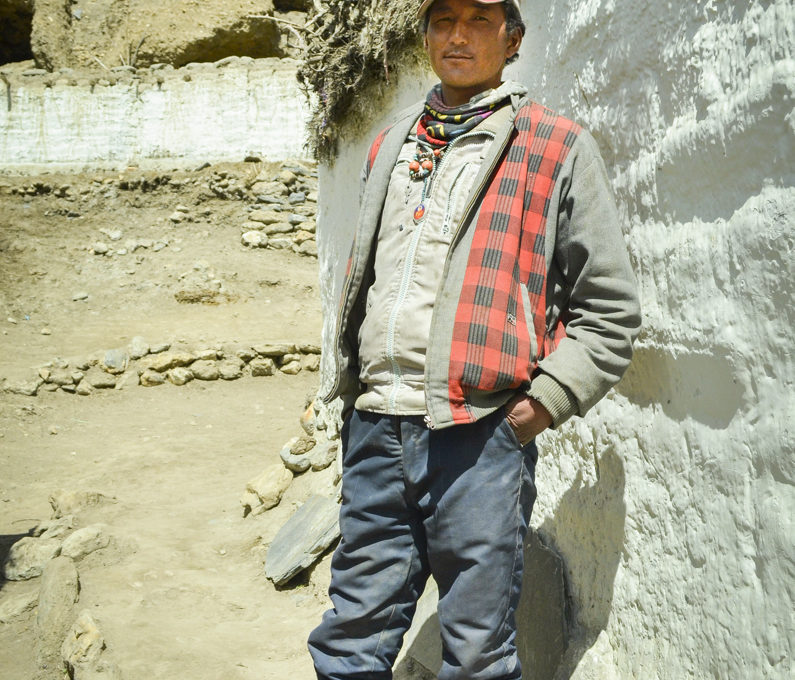 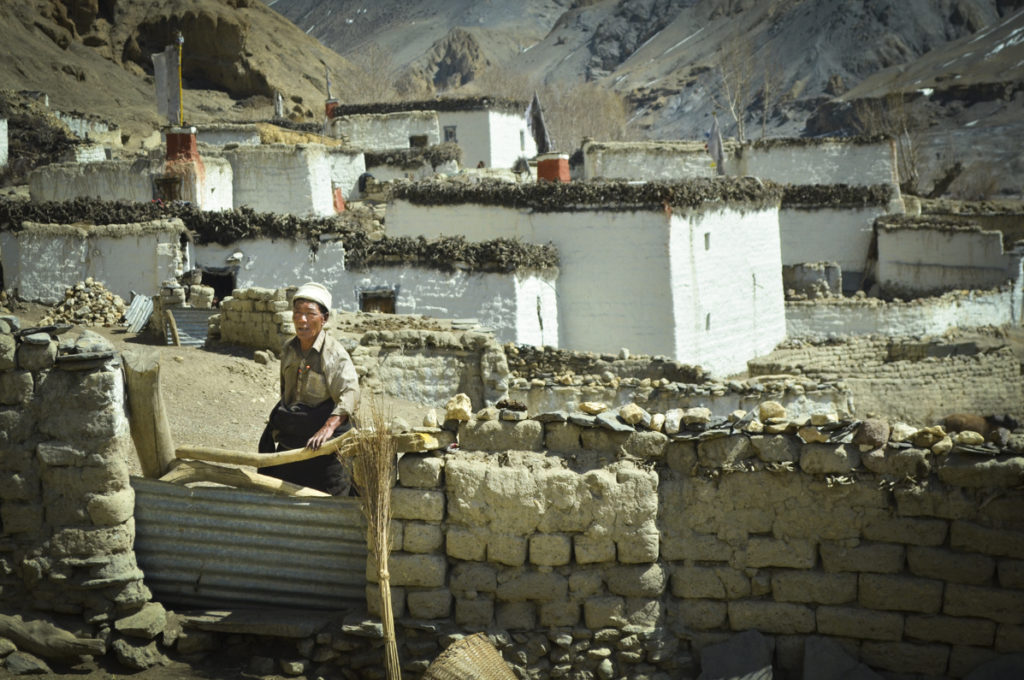 Tsedhup Gurung keeps his cattle in the shed after rearing them. Stockbreeding is becoming residents’ other source of livelihood. 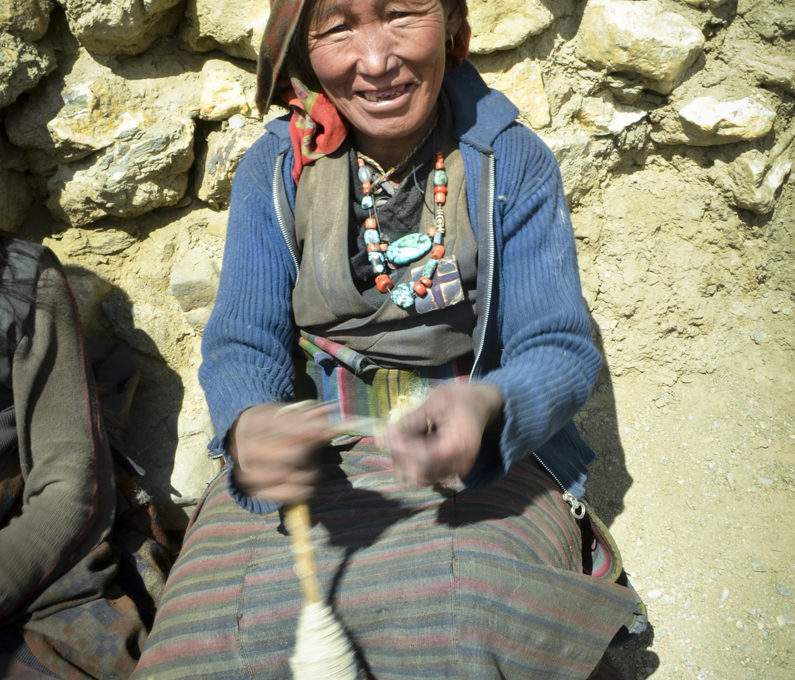 A woman spins thread out of sheep wool. Residents work in the fields during the summer and weave during the winter. 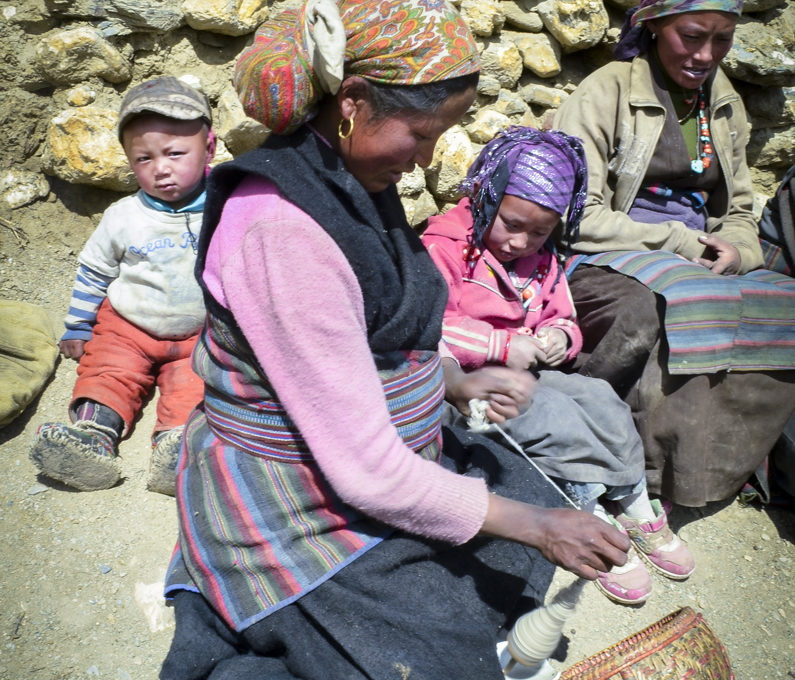 Men and women spend their winters weaving sheep wool to make shoes and garments. During afternoons, they sit together and weave while children play. 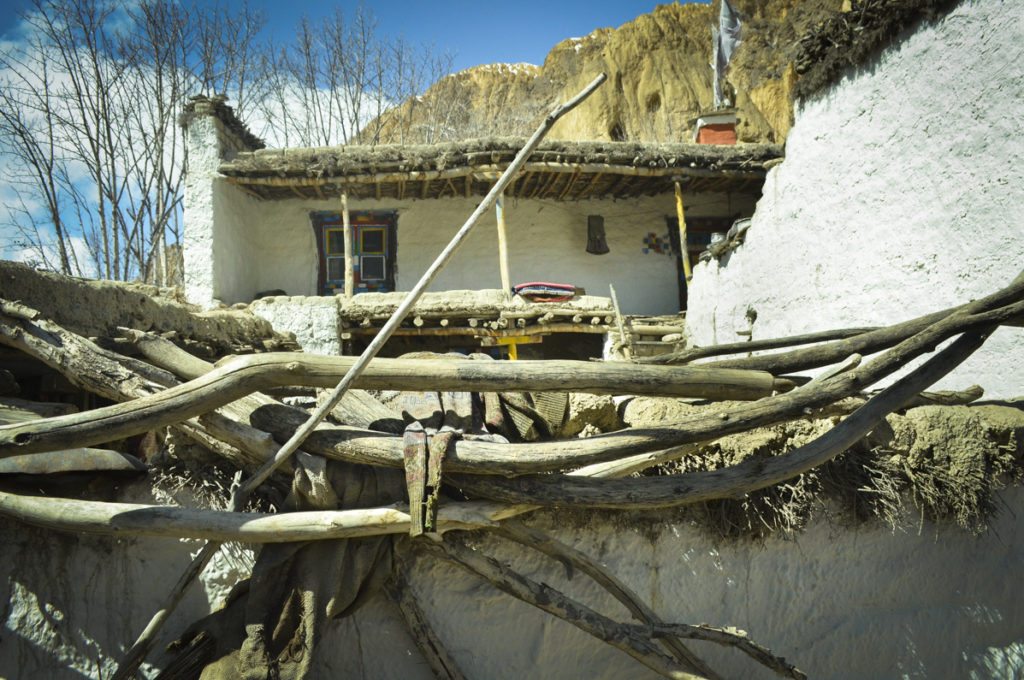 Samzong residents use the rooftops of their houses to dry firewood and dung to use as fuel for cooking. 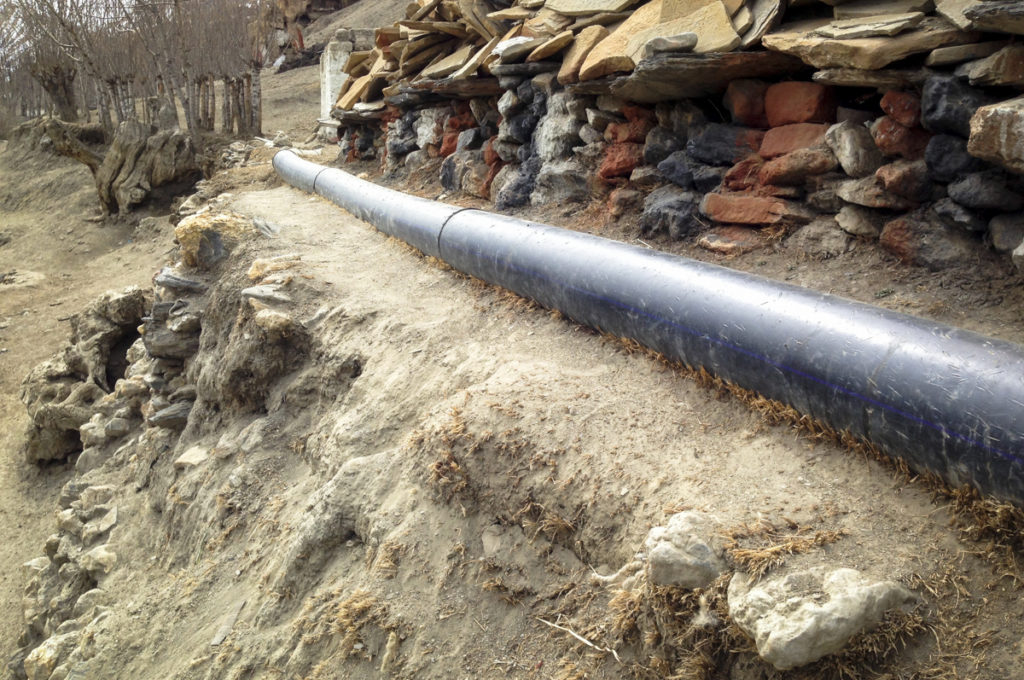 A water pipeline is one of ways the villagers try to irrigate the fields. But the water supply is no longer sufficient. 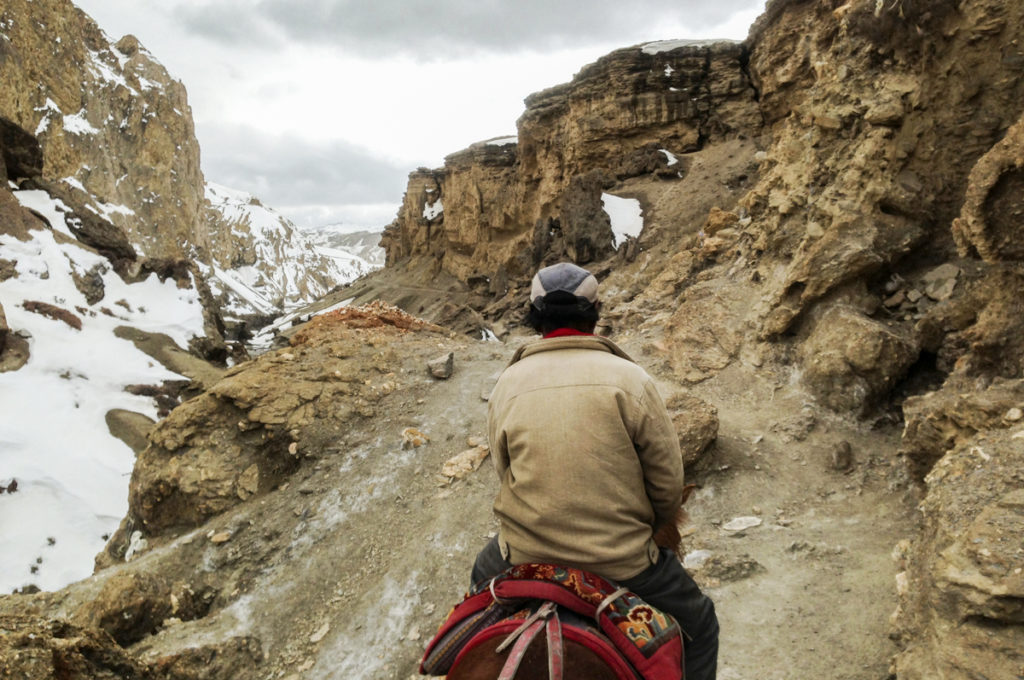 A local resident leaves on a horse for the district capital, Lo Manthang, to buy supplies. There are no shops in Samzong, so villagers have to travel to Lo Manthang to buy goods. 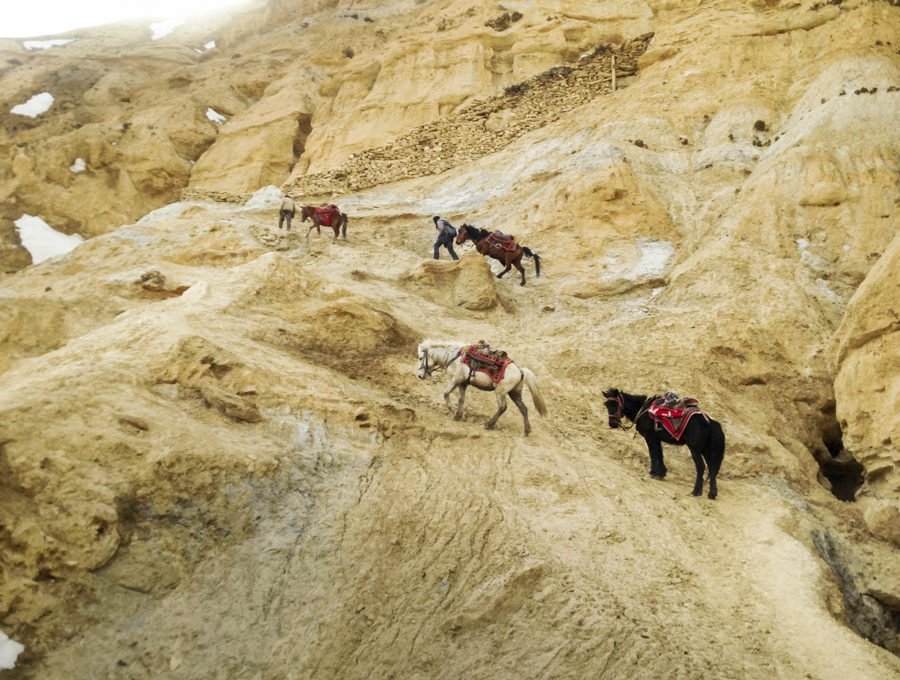 There are no roads, just rough lanes, to Samzong. People can access the village only by foot or on horse. 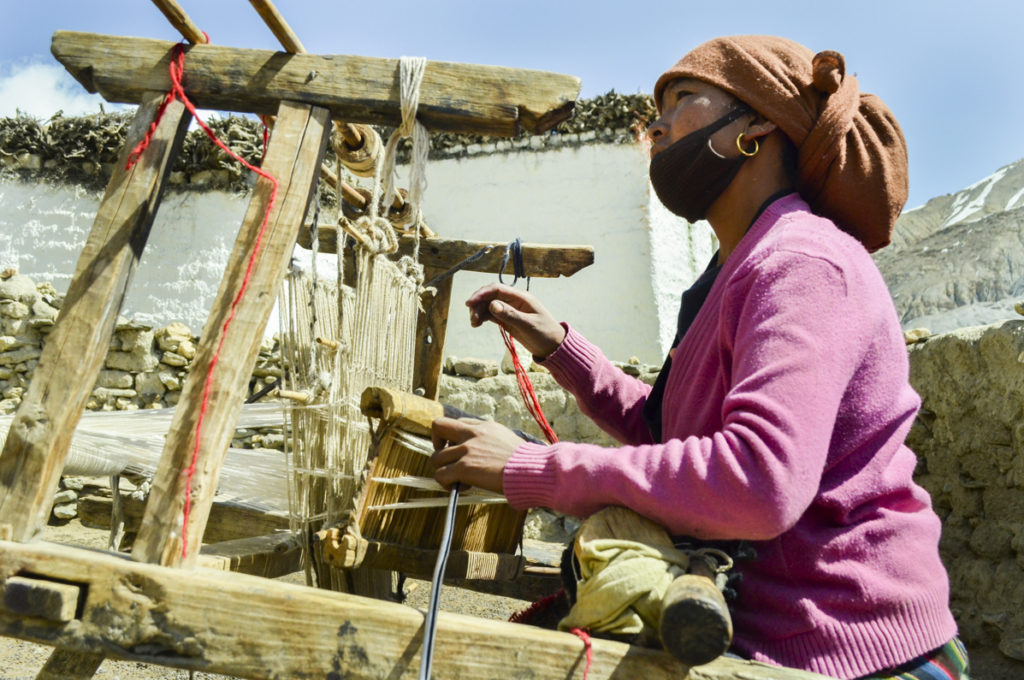 Dolker Gurung’s mother, who declined to be interviewed, weaves a carpet in her yard. 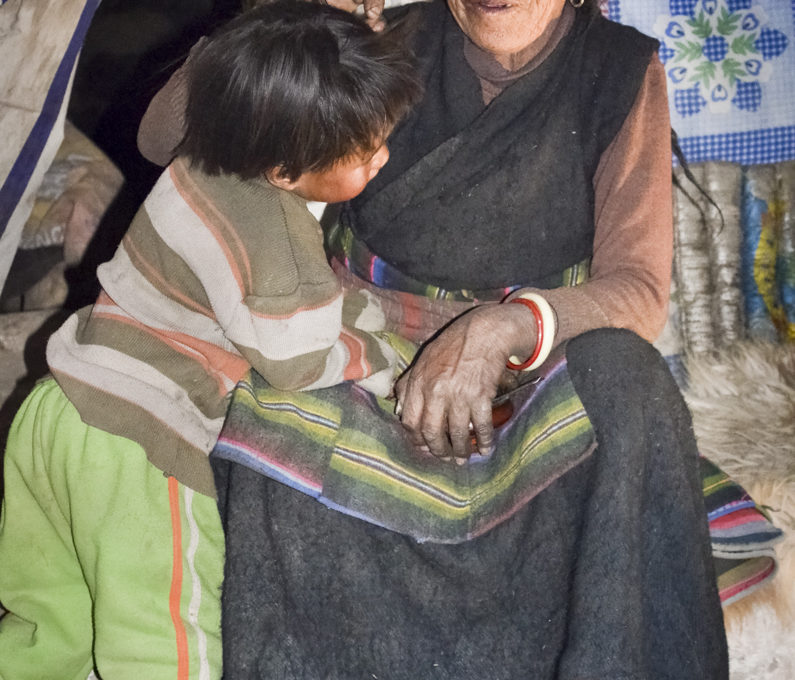 Kyipa Gurung, 65, and her granddaughter, Dolker Gurung, wait for lunch in their kitchen. 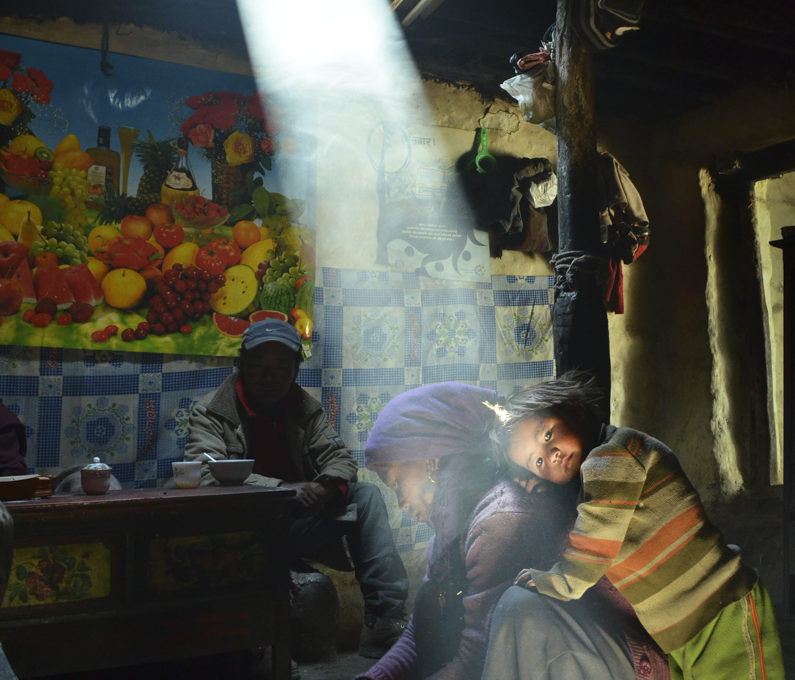 Dolker Gurung, 3, embraces her mother while she prepares lunch for the family. Food shortages are now common here. 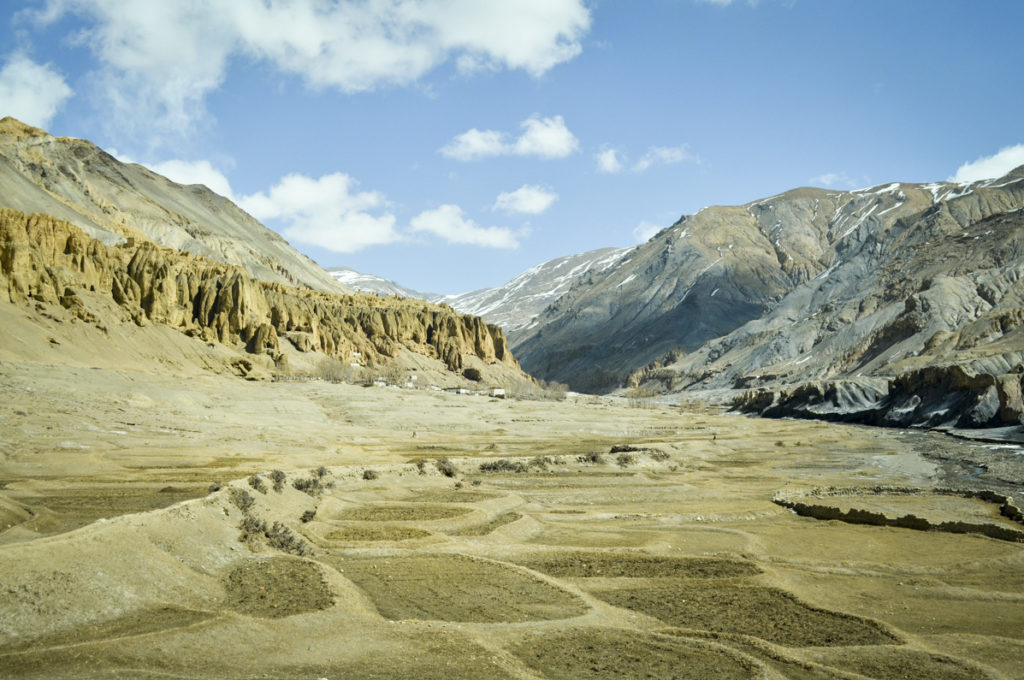 The fields in Samzong are drying up because of climate change. 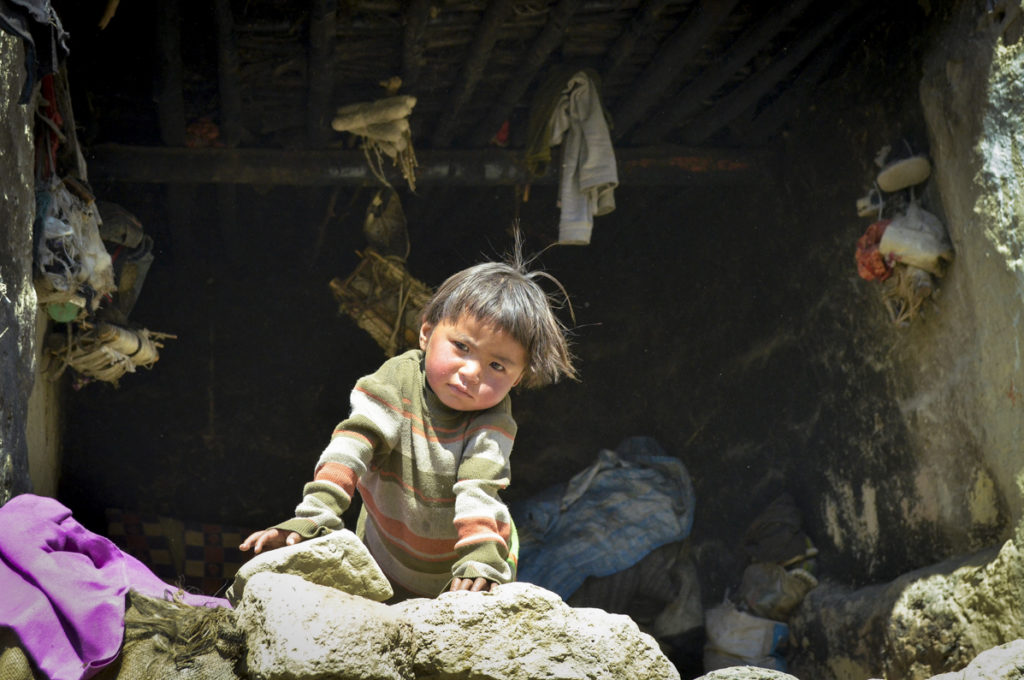 Dolker Gurung, 3, plays outside her house, which her family will soon abandon. 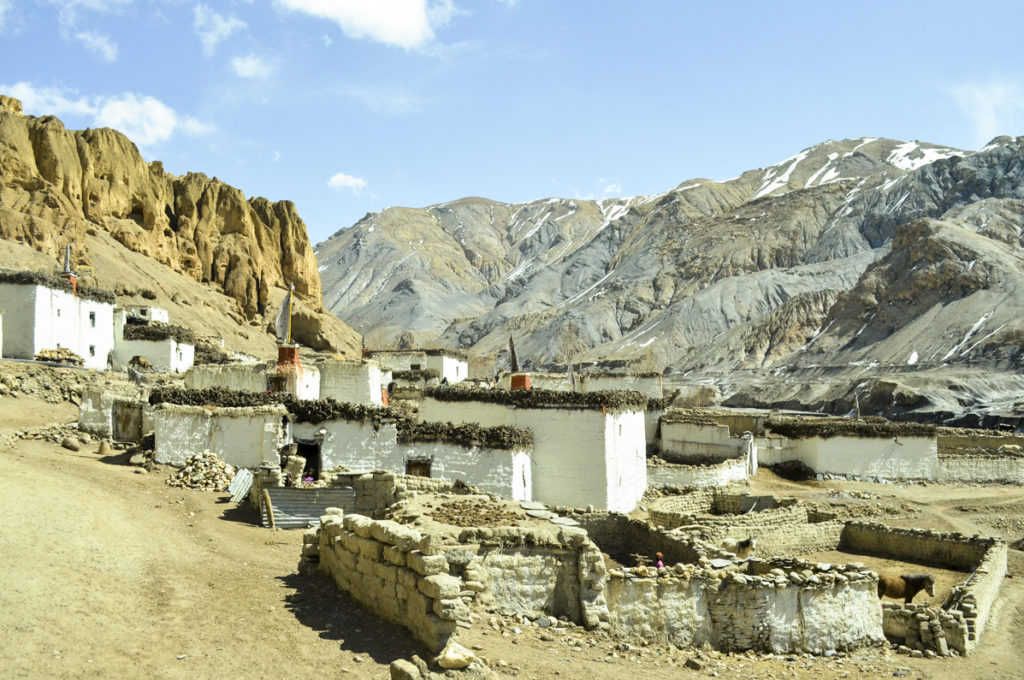 There are 17 households in Samzong. All families are planning to leave by summer 2014 because water has become scarce. 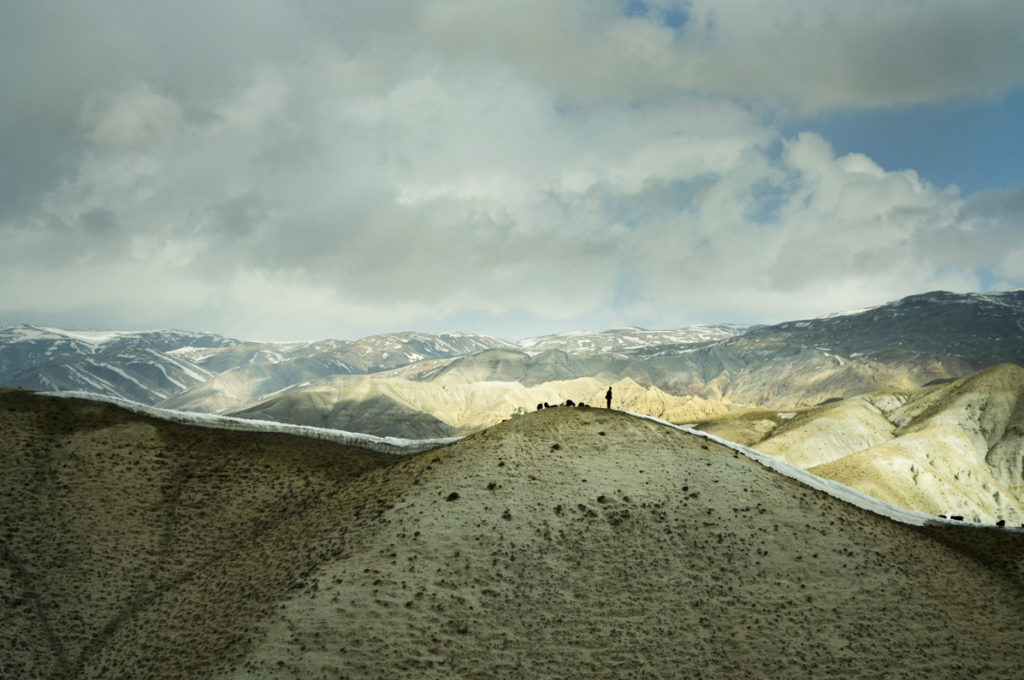 Mountains and cliffs surround Samzong, which is located close to Nepal’s border with Tibet. 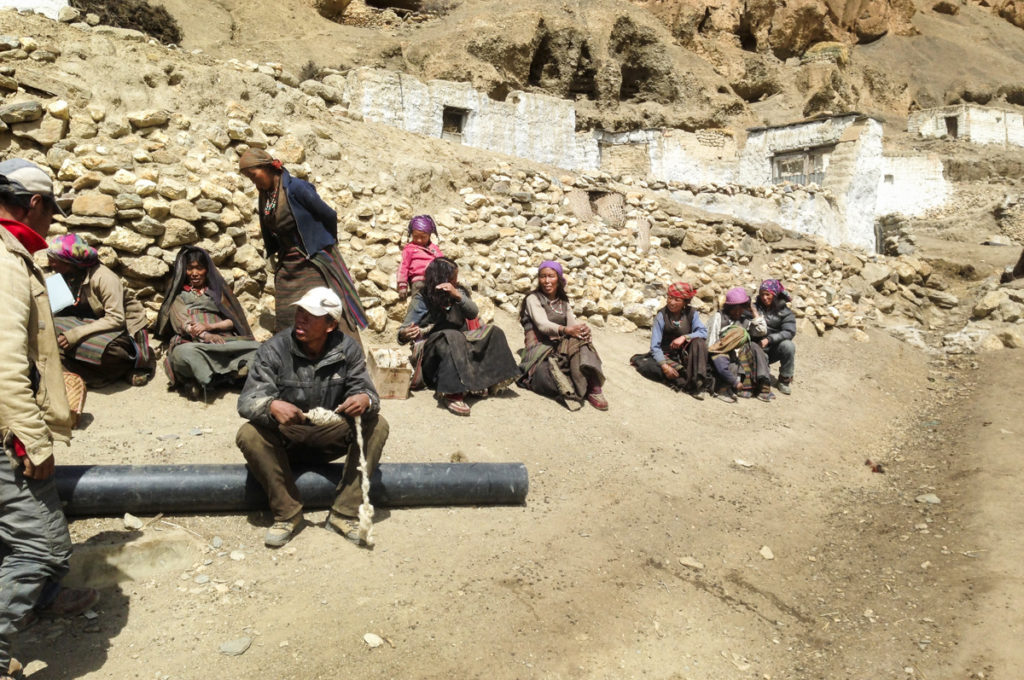 The villagers gather for a meeting conducted by Tsewang Rigzin, the village ghenpa. All residents will move to Namashung, a nearby village, in 2014 because of the lack of water in Samzong.

“Consequently, the perennial flow of Samzong Khola is expected to decrease in the future,” according to the report. “The predominant problem in Samzong is the combination of insufficient water availability and inefficient irrigation supply systems.”

The organizations that performed the study have been investigating strategies to support the people of Samzong. Relocation to Namashung is not a long-term solution, according to the report. But it is a better choice than staying in Samzong because of the scarcity of water.

Resident Kyipa Gurung, 65, remembers a time when the crops yields were high and plenty of rain fell each year, she says. But during the last 30 years, residents have had to abandon their fields because water has become scarce.

The snow does not fall here as it once did either, she says. Temperature and rainfall patterns are now impossible to predict.

Another resident, Norchung Gurung, 55, also remembers a strong crop yield when she was young. Her family never had to buy food, she says. Rather, there was always a surplus of crops, which they used to sell. There was even enough to feed the cattle.

But things started changing approximately 35 years ago, she says. Today, living in Samzong is no longer an option.

“We did not have enough water to irrigate the fields,” Norchung Gurung says. “We had to abandon the fields on the other side of the river. Things are difficult now, as we have to buy food. We even have to buy fodder for the cattle. Survival now seems impossible.”

Global Press Journal’s Shilu Manandhar visited Samzong to photograph the effects of the changing climate and to document life in the village before residents abandon it.

The Gurungs are not related. It is the common caste name for the area.