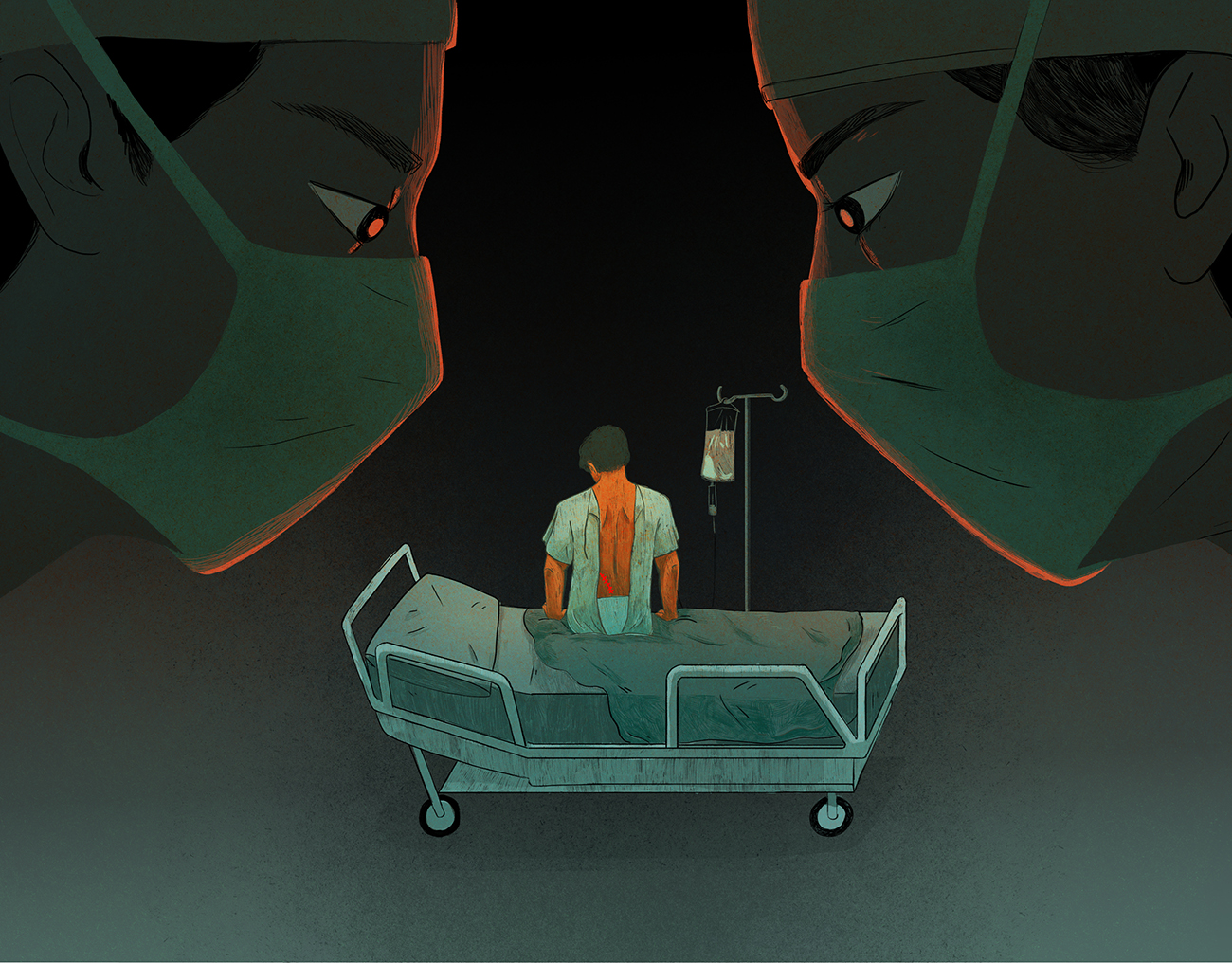 KAVREPALANCHOWK, NEPAL — As Gyan Bahadur Ramtel, 35, lifts a bucket of pig feed, he cringes in pain.

“I told you not to lift heavy things,” his wife, Mandira Ramtel, shouts at him, taking the 10-liter (2.6-gallon) bucket from him.

He has been in pain since 2011, when he says he was coerced into donating a kidney.

That year, he travelled to Punjab, India with his friend, Pralhad. In India, during a night of drinking, he says, his friend told him that a type of “minor surgery” could fetch him 10,000 Nepalese rupees ($96). He says he told his friend he was interested in learning more.

But when he woke up the next day in a hospital bed he was confused and alarmed.

“When I found myself in a hospital bed, I thought I was suffering a disease,” he says.

As he opened his eyes, he says, Pralhad and a group of men he describes as goons were standing in front of him.

He says Pralhad told him that doctors were performing a blood test, but wouldn’t say why. When the men left the room, he says another patient told him what was really going on.

“Slowly, [a young man] approached me and whispered in my ear. He told me, ‘Run away from here because they are preparing to remove your kidney,’” he says. “I tried to run away from the hospital many times. But I got caught each time.”

He says Pralhad and the group of men would not allow him to leave, and hospital staff seemed unaware of the situation. He would not reveal the name of the hospital.

There were many other Nepali men in that hospital whose kidneys were also removed, he says.

“I finally agreed to allow them to extract my kidney out of the fear that I would not be allowed to return home,” he says.

Nothing Pralhad told him was true, he says.

I finally agreed to allow them to extract my kidney out of the fear that I would not be allowed to return home.Gyan Bahadur Ramtel

In Nepal, illegal kidney donation remains common, despite a law that requires kidney donors to be living relatives – either by blood or, if by marriage, after at least two years of continuous relationship. Despite the law, advocates say that the black market for kidneys has been growing in Nepal for a decade and that young Nepali men are routinely lured to India and promised big money in exchange for donating a kidney.

Nepal formally started transplant services in 2008 and kidney disease is on the rise here, says Pravin Kumar Joshi, a general surgeon in the Department of Transplant and Hepato-Pancreato-Biliary Surgery atthe  Human Organ Transplant Center (HOTC) in Bhaktapur, Nepal. Just three hospitals in Nepal provide kidney transplants, but the surgery is increasingly common, with 1,005 transplants performed since the beginning of 2017.

Hospital committees are supposed to confirm that a kidney is provided by a blood relative or an in-law, but staff say that fake documents are often provided before a transplant to prove a relationship.

Police suspect collusion between the patients’ families and hospital committees.

“If it is happening and we get a complaint we will definitely pursue the legal process for punishment,” says Sahakul Thapa, superintendent of police at the Kavrepalanchowk District Police Office.

But Joshi says hospital staff are not part of the conspiracy. They are on the receiving end of convincing documents that may be fake.

“It comes to light during the transplant that the kidney was donated by establishing fraudulent relationship through forgery of a citizenship certificate,” he says adding that the problem is “due to a weak law enforcement system.”

Police say the kidney-trafficking rings are difficult to bust. Most of the illegal surgeries happen in India, and families desperate for a kidney are unlikely to come forward to admit that they’ve procured the kidney illegally by forging documents and buying a black-market kidney to save the life of a loved one.

Mandira Ramtel, 36, says she has been living in fear since her husband was duped into losing his kidney. The couple says they don’t know what the long-term health consequences of the surgery will be. After nearly seven years, he still suffers with frequent pain and physical weakness, she says.

“My relatives tell me, ‘Your husband is going to die soon.’ They even suggest that I find another husband,” she says, adding that they have been living hand-to-mouth since the surgery.

“Since I feel my husband is physically weak after selling his kidney, I have not allowed him to do strenuous work,” his wife says.

Gyan Bahadur Ramtel says that he suffers from pain when bending or lifting heavy items, muscle spasms in the legs while walking and fatigue.

These ailments are common after kidney removal, Joshi says.

Thapa of the district police says they remain aware of the situation but have not received a formal complaint of kidney trafficking here since 2014.

“We cannot take any action until there is complaint filed at the police office against perpetrator,” he says.

And without law enforcement, the trade will continue to flourish, says Satish Sharma, program coordinator at Forum for Protection of People’s Rights, a nongovernmental organization.

He says the forum has documented more than 300 people in the Kavrepalanchowk District who have sold their kidneys either willingly or forcefully.

“Due to lack of awareness, they do not even know that they are getting deceived,” says Sharma.

He says those who were duped into selling a kidney are living with physical and psychological trauma.

“After providing their kidneys most do not receive the money as promised,” he says.

A recent study conducted by the forum found that Nepali brokers can sell kidneys for as much as 150,000 rupees ($1438).