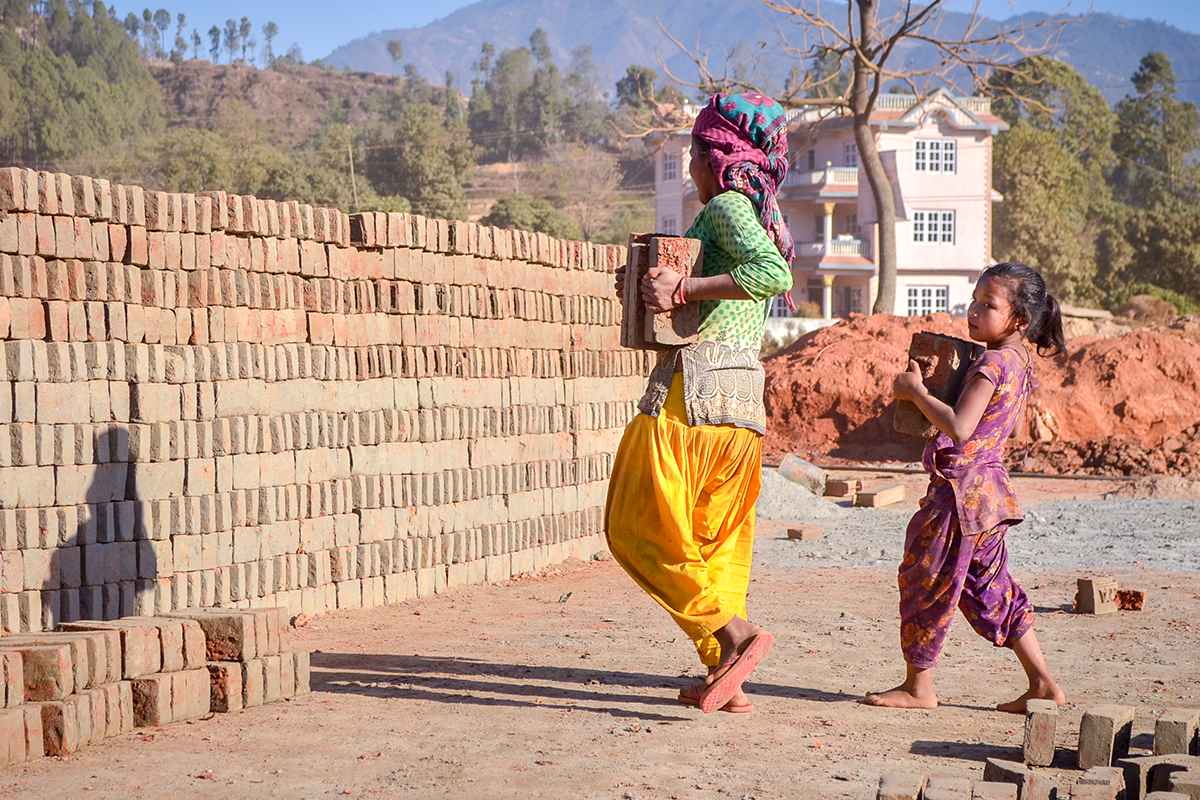 JEEWANPUR, NEPAL — Brick dust covers the worn-out clothes of a barefoot girl. Her palms are cracked, her fingers cut, but the wounds haven’t stopped Rita Tamang, 6, from working.

“I do not have any other work to do, so I live and work here,” she says, hoisting bricks against her chest to carry the load.

“There is no choice other than to work,” she says.

INSIDE THE STORY: Despite laws outlawing child labor in Nepal, GPJ reporter Kalpana Khanal saw young children working in brick kilns. She found that the scale of the problem so great, and funds for enforcement so small, that Nepal’s laws to prohibit child labor are little more than mere pieces of paper. Read the blog.

It has been six months since Rita started working in the brickyard at Tata Itta Bhatta Udhyog (Tata Brick Kiln Industry) in Jeewanpur-9 in Nepal’s Dhading district. Her two elder sisters and two elder brothers work at brick kilns in the Dhading district as well, as do her parents.

While child labor is outlawed by Nepal, children, even young children like Rita, are working in brick kilns and hotels, for rug weavers and grocers. The Child Labor (Prohibition and Regulation) Act, 2056 (2000) bans children under 14 from working as laborers, and the government has prepared a master plan to rid the country of child labor by 2020.

But sufficient funds have not been allotted for effective enforcement. Ram Chandra Siwakoti, a section officer at the Department of Labor, says the government allocated only 150,000 Nepali rupees (about $1,450) in fiscal year 2015-2016, severely limiting the agency’s ability to inspect each kiln, each weaver. And in a nation where about 25 percent live below the poverty line, and where schools are not affordable for the poor, children are pressed into labor.

The extent of the problem – just how many children are laboring for how many hours a day at what jobs – is difficult to ascertain, but the data that exists indicates many children work. Nepal’s National Population Census published in 2012, the most recent available, reports that 104,714 children worked as laborers for at least one hour a day: 56,267 boys and 48,447 girls. A 2014 Multiple Indicator Cluster Survey jointly conducted by government and UNICEF found that 37.4 percent of those between 5 and 17 worked as laborers.

In the brick industry between 2013 and 2015, Nepal’s National Human Rights Commission estimates that nearly 13,530 children worked making or carrying bricks in Kathmandu valley, and another 14,889 child laborers worked in kilns outside the valley. 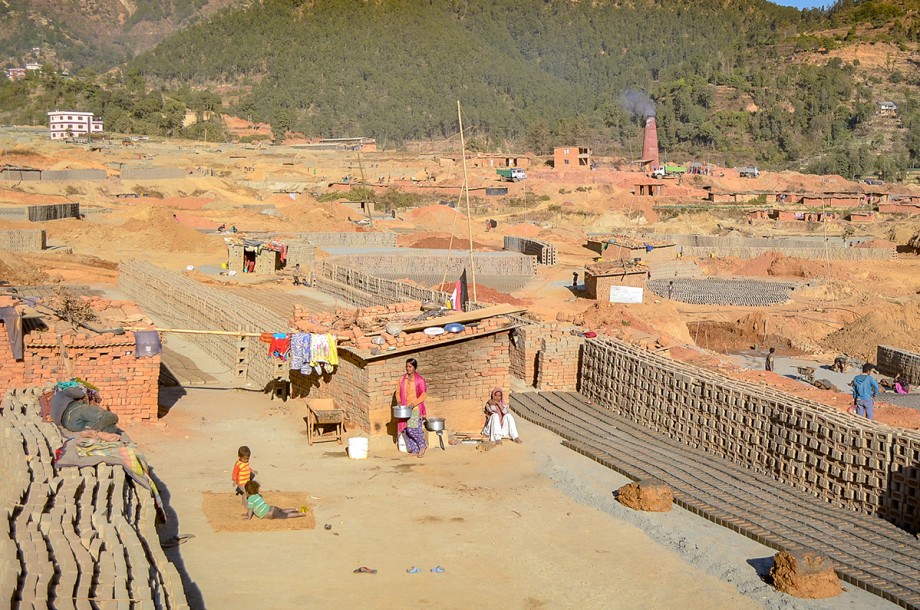 The Tata Brick Kiln in Jeewanpur, a village about 32 kilometers (about 20 miles) from Kathmandu.

Growing Up in the Kilns
Rita finds herself in the kilns, because that is where her family lives, and making bricks is what they’ve always done. Her mother, Punmaya Tamang, 43, says she began making bricks at 14. She met her husband in a kiln.

“We do not have any house or land,” she says. “We have been making a living in this way from working in the brick kiln.

Rita’s work is needed to contribute to the family’s living expenses, her mother says. Working seven to eight hours a day, Rita is paid between 1,500 and 2,000 Nepali rupees ($14 to $19) per month, her mother says.

Besides, the family can’t afford Nepal’s schools. Punmaya Tamang says the family’s earnings aren’t enough to enroll her five children, which would cost 10,000 to 15,000 Nepali rupees ($97 to $150) a month.

“If it was one child, we could have sent to school,” she says. “The family is big, and the income is not so high, so we cannot send children to school.”

Sabina Khatun, 27, a native of Rautahat district, also followed her parents into brick making. She’s worked in kilns for 14 years and also says she can’t afford to send her children to school.

With family earnings of 12,000 Nepali rupees ($117) a month, Khatun says, “we cannot send children to school, even if we want. This is how our life is. My children’s lives are going to be like mine. What work is available for poor people other than this?”

Narayan Prasad Bhattarai, Nepal project coordinator for the International Labour Organization, a part of the United Nations, says the problem of child labor won’t end in Nepal until government schools are compulsory and entirely free. The inability to afford school results in children remaining on work sites with their parents – and children end up on small kilns throughout the nation helping fill the demand for bricks in demand for construction after the 2015 earthquake.

Labor Law Prohibitions
The Department of Labor’s Siwakoti says that the law clearly prohibits children under 14 from being used as laborers. It provides a three-month jail term and fines up to 10,000 Nepali rupees ($97) for violations.

In the brick industry between 2013 and 2015, Nepal’s National Human Rights Commission estimates that nearly 13,530 children worked making or carrying bricks in Kathmandu valley, and another 14,889 child laborers worked in kilns outside the valley.

Under the law, teenagers between 14 and 16 can be hired for light work as long as their parents approve. Even then there are restrictions, such as limiting their hours to six a day. Siwakoti says the law also prohibits employers from using children under 16 in risky work, including jobs in hotels, restaurants, casinos, slaughterhouses and the carpet- and garment-weaving industry.

Those using children for such hazardous work could be jailed up to one year, or fined 50,000 Nepali rupees ($488), or both.

Tata Brick Kiln is one of the estimated 1,200 small kilns located throughout Nepal.

Turning to Kilns for Work ‘a Necessity’
Mahesh Tamang, 14, who is not related to Rita or her mother, turned to the kilns to better his life because he had no place else to earn money after the 2015 earthquake destroyed his home.

“Working in the brick kiln is not my desire,” he says. “It’s a necessity.”

Mahesh was living with five other family members in a single tent for months. He says he couldn’t sleep, and often there wasn’t enough food.

“Then I came [to the kiln] with a person whom I had known in the village,” he says. Without an education or other skills, he says making and carrying bricks is the only work he knows how to do.

“Now the rest of my life is going to be spent in the brick kiln,” Mahesh says.

International Help Requested
Government officials like Siwakoti say international support is necessary to combat the problem. Nongovernmental groups like Save the Children and Global Fairness have begun programs to assist. Both offer incentives to kiln owners who certify that they do not use child or bonded labor.

Participating kilns in Global Fairness’s Better Brick Nepal (BBN) program, for instance, receive technical assistance to improve working conditions and boost efficiency and brick quality. Kilns that are certified as being child-labor free are also helped to find potential new markets. Over time, the goal is for kilns that meet the BBN standard to have better, more profitable businesses than those that use child or bonded labor, says Homraj Acharya, Global Fairness country director for Nepal. 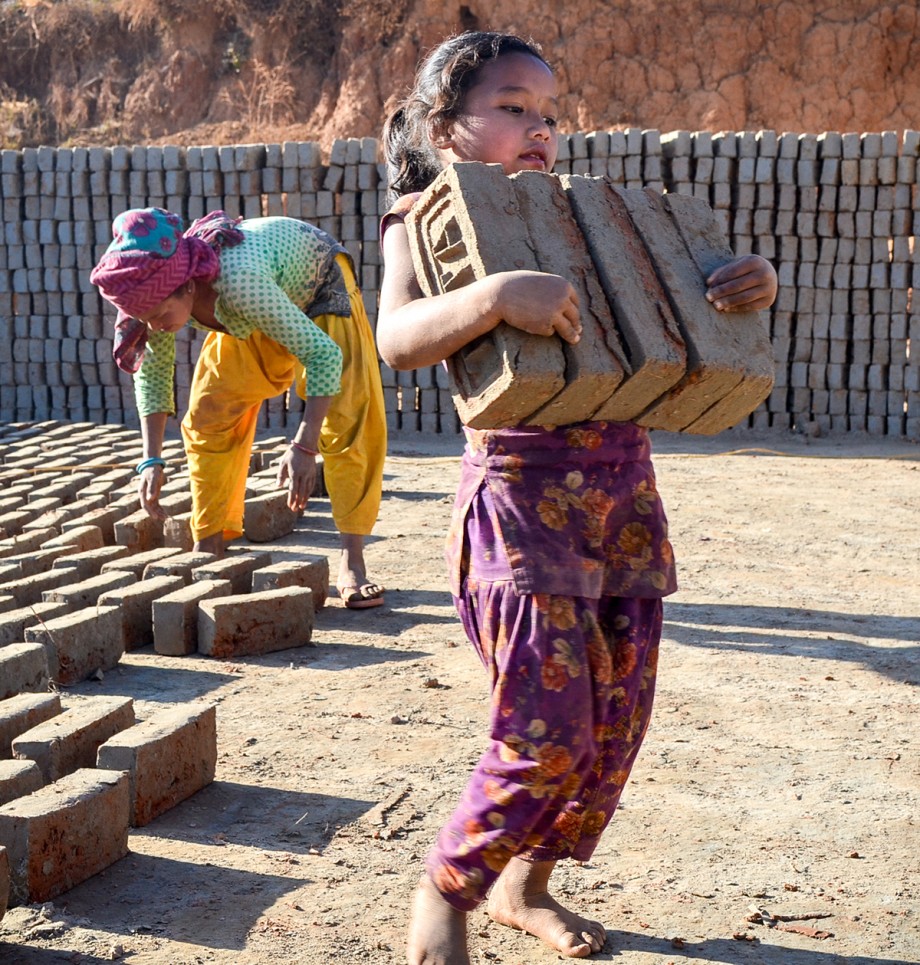 Manisha Tamang (left), 13, and Rita Tamang, 6, live and work with their parents at the kiln site. The family lives in a temporary house.

The project has expanded from 14 kilns in 2014, when the program began, to 40 kilns in 14 districts today. So far, 13 have earned the status of child labor-free kilns, Acharya says.

At the brick kilns, the organization runs an early child care and education program for children under five. And because many families who work in kilns migrate with the seasons, the program also connects older children with nearby schools and provides tutoring. So far, 1,842 children in the 40 brick kilns have received education in these classrooms, Acharya says.

Though government figures put the number of children working in kilns at 28,000, Acharya estimates that there are nearly 60,000 working in the approximately 1,200 brick kilns across the country. Some, he says, work nearly 15 hours a day.

“There are so many rules, regulations and laws governing child labor, but the children working in vulnerable conditions in brick kilns are largely ignored,” Acharya says.

The ILO’s Bhattarai says the government should establish a child laborer rescue center. “We do not have capacity to immediately rescue child laborers when we see them,” he says.

“Only making laws is not enough; we should also have arrangements of shelter for those children who are rescued,” Bhattarai says.

Meanwhile, Rita Tamang is not one to complain.

“Carrying bricks is not easy. Legs, hands and body ache a lot,” she says. “For whom is the work not difficult? But, what to do?”