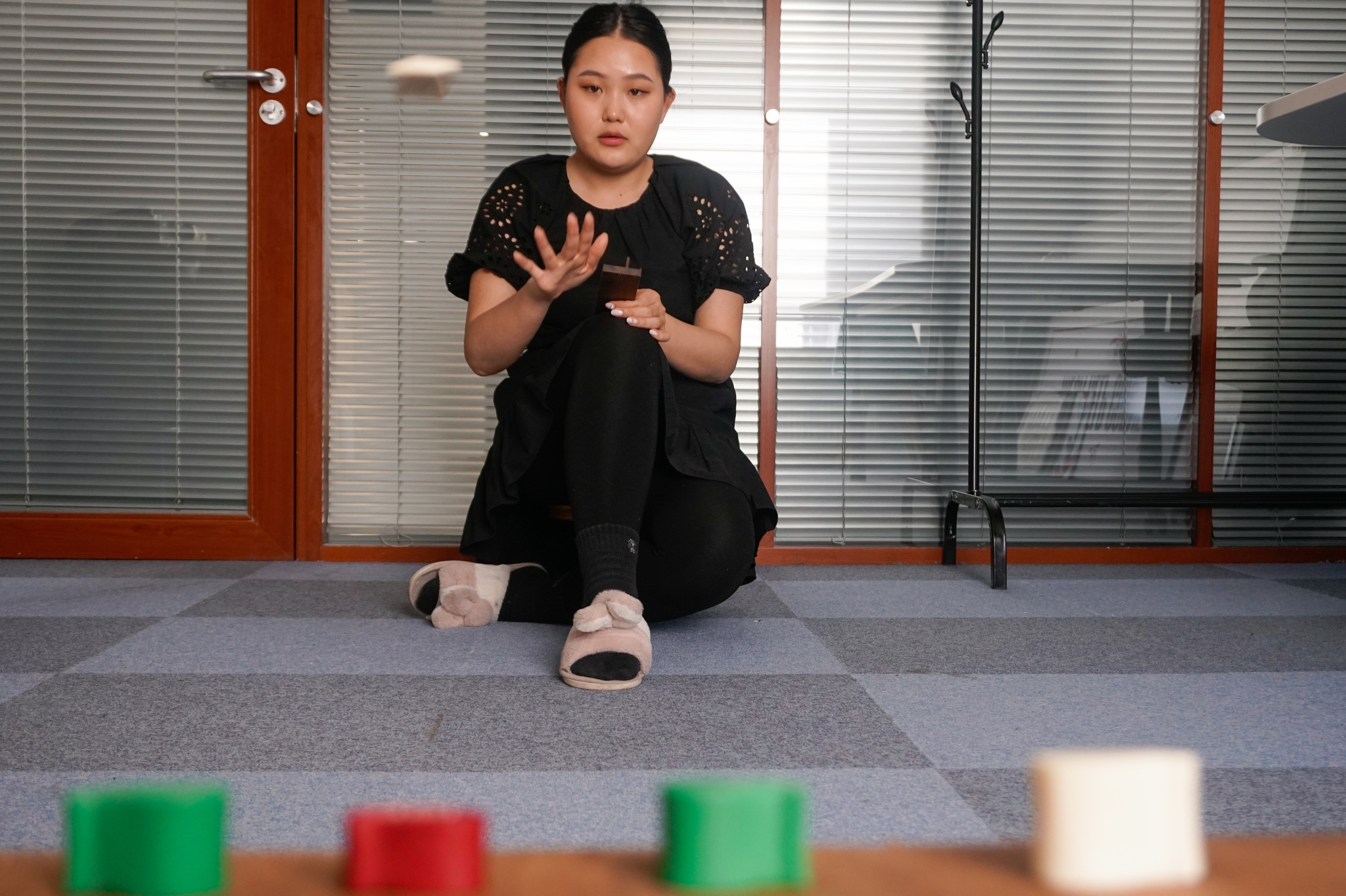 ULAANBAATAR, MONGOLIA — Anarjin Bayarsaikhan walks into the Mongolian Sports Complex in the capital, Ulaanbaatar, looking more like someone on an evening stroll than an athlete. She is dressed in black — a dress, leggings and socks — and on her feet she has pinkish and white fluffy sandals. But Anarjin is a serious athlete and, since 2021, she has been practicing her skills in knucklebone shooting, an ancient Mongolian game known locally as shaga that has been passed down for generations.

“I am extremely excited,” Anarjin says with a broad smile, as she sits on the floor, ready to play.

With her left hand, she picks up a small wooden rail, similar to a Scrabble tile rack, but broader and with flatter surfaces. She rests her arm on her raised right knee. She grabs a small tile, places it on the rail, and aims at her target — cubes made from the best-quality hardwood that grows in the tropics. She flicks the tile strongly with the middle finger of her right hand toward a square box holding the cubes 15.5 feet away. The tile hits with a twang, dropping a square cube called a khasaa.

“That was a pretty hit!” she says and jerks with excitement.

After centuries of excluding women like Anarjin from playing knucklebone shooting, the Mongolian government, activists and sports administrators have embarked on a campaign to change perceptions and increase the number of women participating in tournaments. In 2014, knucklebone shooting was inscribed on the United Nations Educational, Scientific and Cultural Organization’s Representative List of the Intangible Cultural Heritage of Humanity. The Mongolian government followed the news with the creation of a policy to develop the game and turn it into an international sport.

Knucklebone shooting originated in Mongolia in the 13th century and was originally a royal pastime. Over the centuries, it has been passed down through generations and expanded to the general population. Today, it is one of the sports played during the national festival of Mongolia called Naadam, a holiday observed annually from July 11 to July 13. 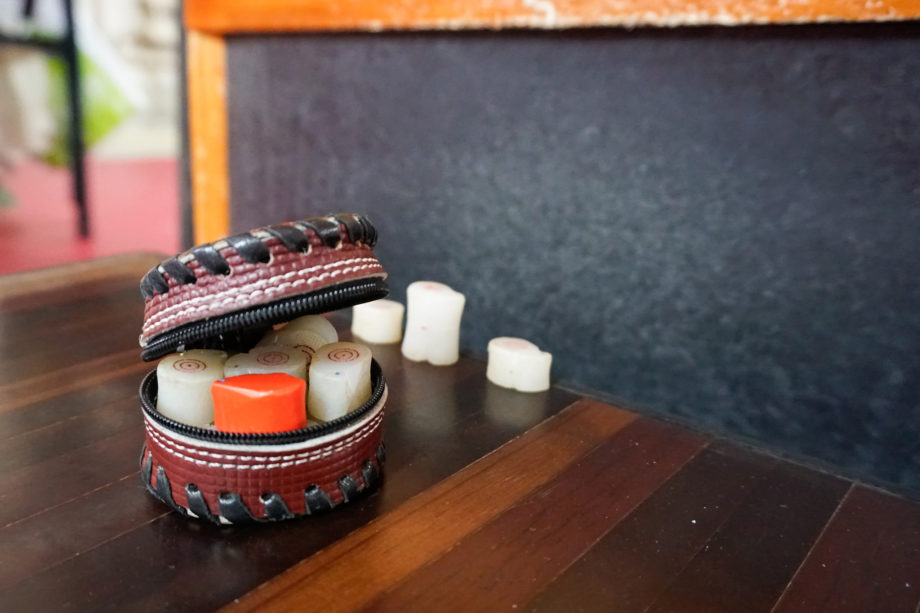 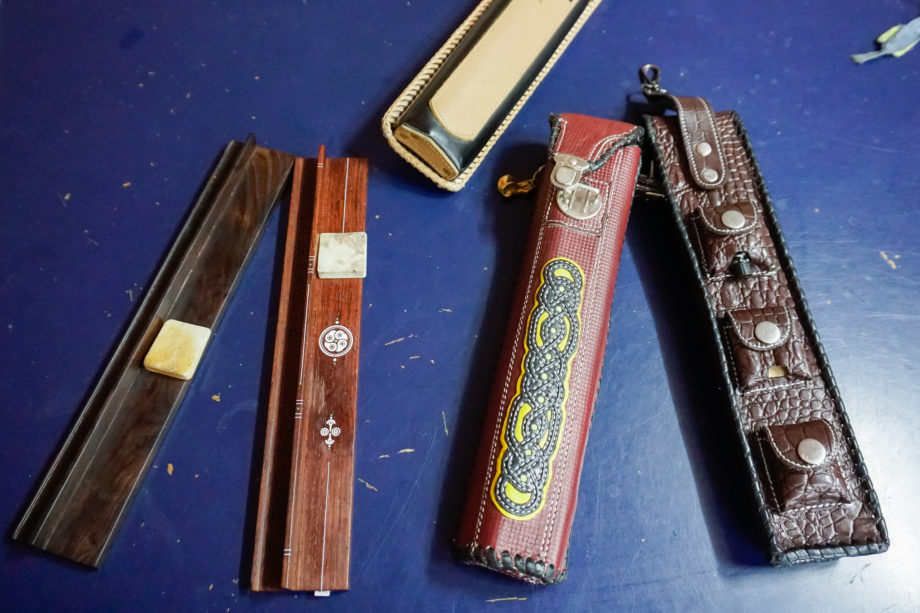 Wooden railings and bone tiles that are used in knucklebone shooting are seen here with carrying cases at the Physical Education and Sports Department in Orkhon province, Mongolia.

It’s called knucklebone shooting because pieces of the game were originally made from the ankle bones of animals like sheep and gazelles. Initially, the pieces were shot from the palm of the hand. Nowadays, the railings are made of sandalwood, and the tiles are made of wood or deer antlers. A team consists of six members. It takes about 80 minutes to play against an opposing team, and teams sit in a circle for up to 10 hours a day.

“It is rather an intellectual, psychological sport,” he says. “That is why anyone can play it.” 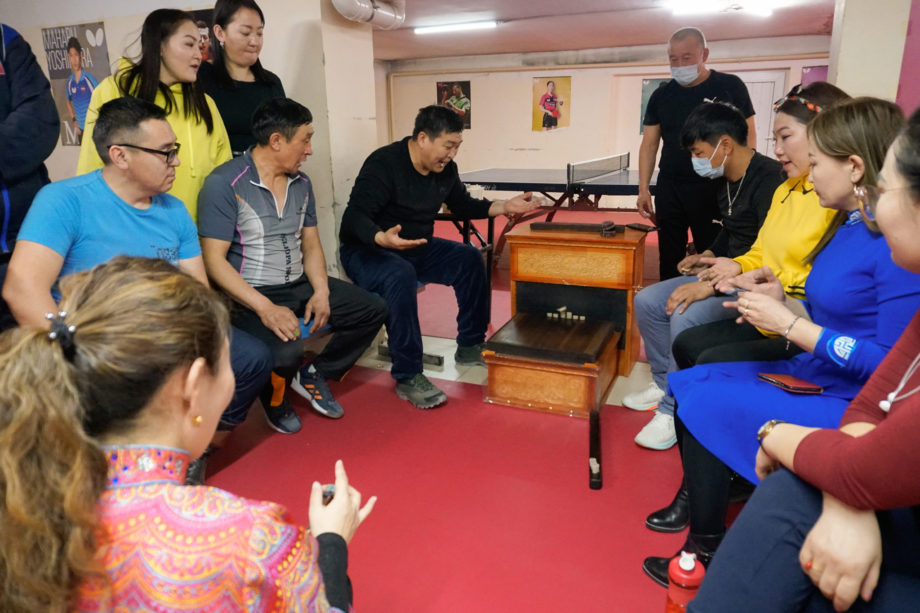 A woman plays a game of knucklebone shooting at the Physical Education and Sports Department in Orkhon province. There's a push to get more women to play the game, which used to be played only by men.

Part of the international growth strategy, he says, is a campaign to convince skeptics that the game will benefit from the participation of women.

Oyunchimeg Tumurbaatar, a 46-year-old resident of Khentii province, says that kind of resistance from men is the reason she has been playing knucklebone shooting secretly for more than 30 years. She developed an interest in the game during her childhood because her father and older brother played it often. Over the years, her skills improved to a level where she could compete with her father.

“My father used to praise me that I shot better than him,” Oyunchimeg says.

Although Oyunchimeg says she believed that she could beat anyone in a game of knucklebones, she never played against any opponent other than her father or her older brother because she was afraid that participating in any competition would damage her father’s reputation.

There are over 18,000 registered knucklebone shooters in the country, according to the Mongolian Federation of Knucklebone Shooting, a nongovernmental organization founded in 1987 and officially registered in 1998. Sixty are shooters with official registration as heritage bearers, and many have ranks and titles. There isn’t a single woman among them.

Sunjid Dugar, the commissioner of the National Human Rights Commission of Mongolia, says barring women from playing the game is a violation of their rights. “There is no rule or regulation that prohibits women from shooting knucklebones,” Sunjid says.

In 2021, sports enthusiasts and researchers formed the Mongolian Sports Corporation. Munkhdelger Jigdjav, the organization’s operational director, says it was founded on the principle that everyone has a right to participate in sports. They organized a state knucklebone shooting tournament where women were allowed to compete. 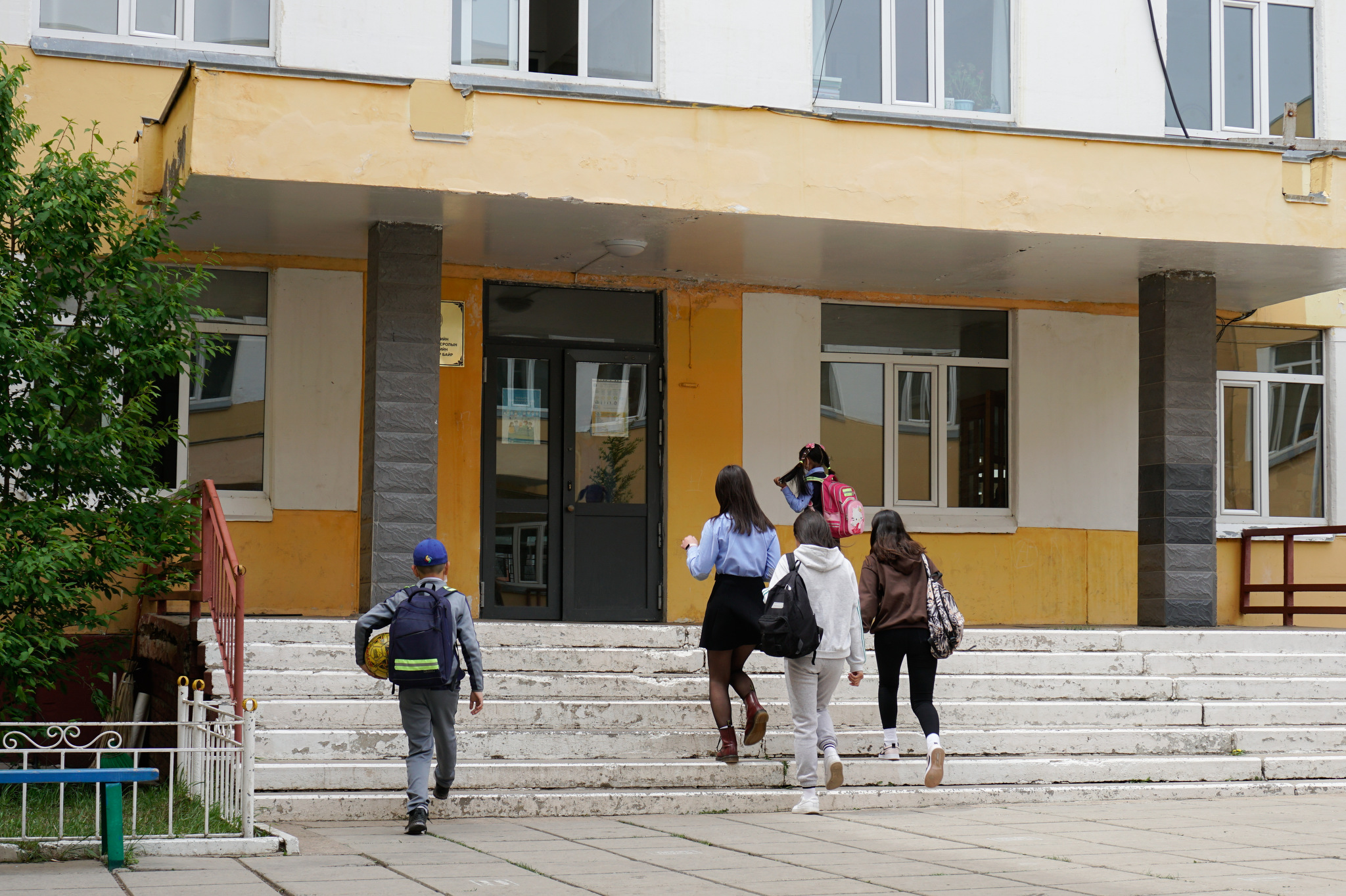 “We noticed that even though women had never participated in past competitions, there were many skilled shooters among them,” Munkhdelger says. “We decided to support them.”

Oyunchimeg was one of more than 50 women who participated in the state knucklebone shooting championship for the first time. Her face lights up as she recounts what it was like to compete in a game she had played secretly for decades.

“I felt like a bird out of its cage,” she says. “It felt really great to be finally free.”

The competition also gave an opportunity to many young women like Oyunsaikhan Tserenmyagmar, a 17-year-old high school student at Devshil School in Zavkhan province. Oyunsaikhan, who only started playing knucklebone shooting in 2021, won the competition and became a state champion.

“I could not believe I became a champion after practicing it for such a short time,” she says. “It was really cool.”

Anarjin, too, took part in the national championship and qualified to participate in international knucklebone shooting competitions. Her dream is to become a champion and inspire more young women to join the sport. She wants to contribute to its development and promotion as it expands beyond Mongolia.

“Each time I play,” she says, “I feel like I am making a new discovery.”