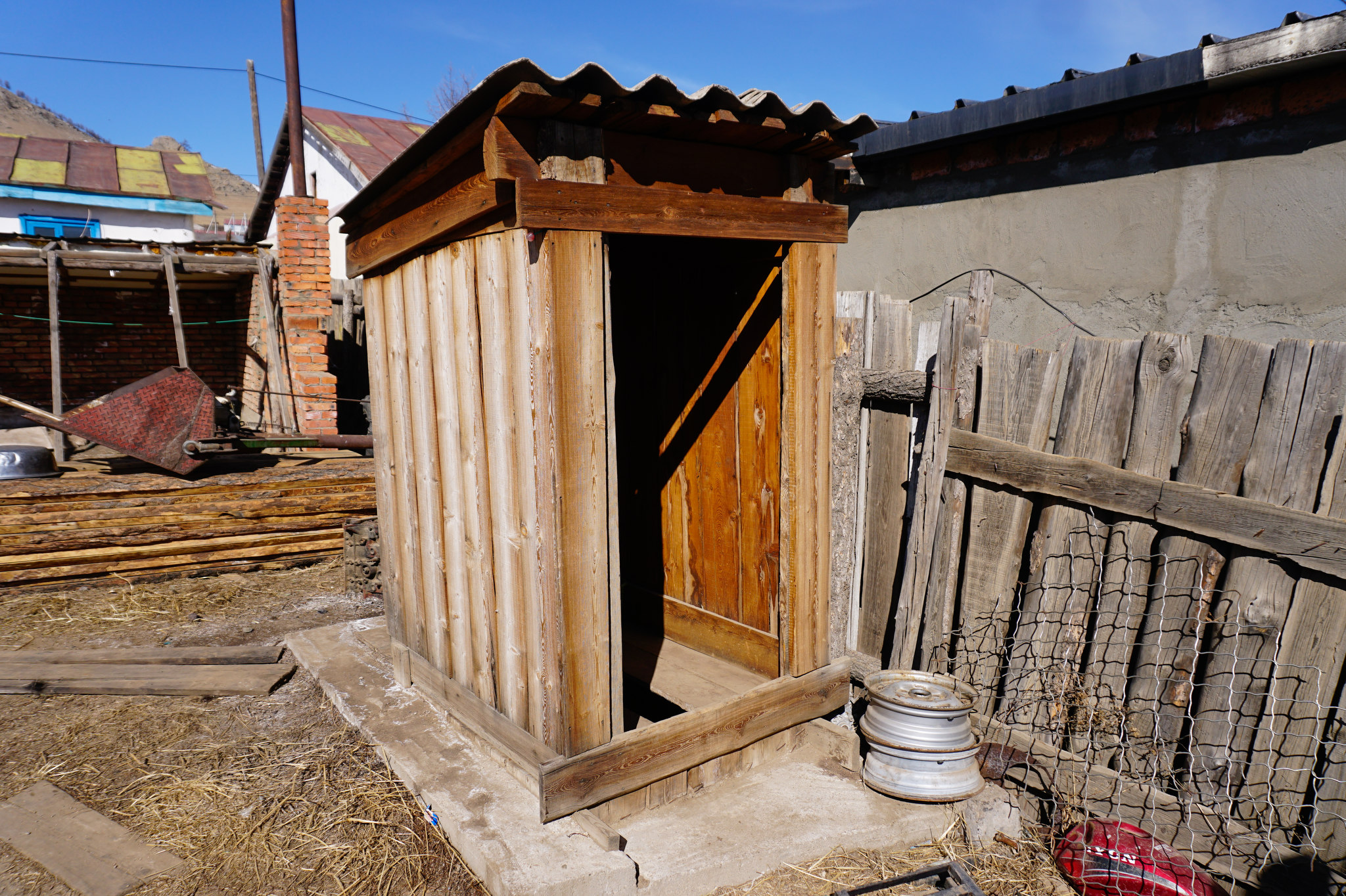 Pit latrines, a centuries-old system of human waste management still used by more than two-thirds of Mongolia’s population, collect sewage in deep pits, which can cause environmental contamination, infections, injuries and even deaths. Safer options are increasingly available, thanks to new technologies endorsed by the country’s government agencies, nonprofits and social enterprises. But obstacles ranging from cultural stigma to financial strain continue to prevent Mongolians from making the switch.

With its frozen winters and low population density, Mongolia is one of the most challenging places in the world to access basic sanitation, according to a 2020 report by the United Nations Children’s Fund and the World Health Organization. Most of Mongolian households lack plumbing, so toilets that require water aren’t feasible.

In 2015, Mongolia’s National Council for Standardization adopted new standards for toilet systems, which stated that they should offer ventilation, odor control, light, and safe sewage disposal. The Government Action Plan for 2020-2024 has budgeted more than 124 billion Mongolian togrogs ($41 million) to upgrade pit latrines in the country’s schools, dormitories and health centers.

The improved latrines, also known as eco-toilets, separate human waste and use ventilation ducts to minimize odor and prevent soil contamination. But the latest eco-toilets cost twice as much to install as digging a pit latrine, and require training and maintenance to keep them in good condition.

Perhaps an even greater challenge, however, has been the cultural stigma against bathroom-related conversations. 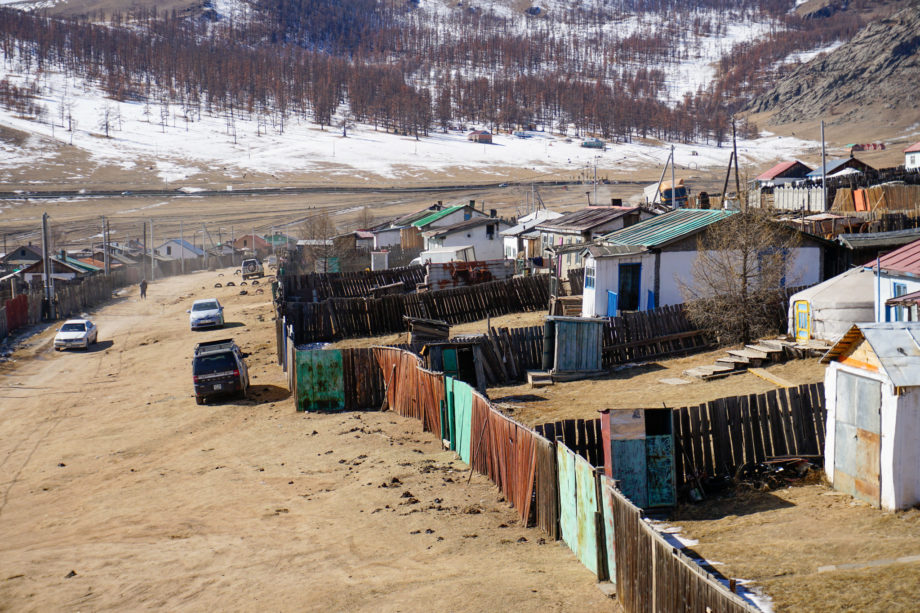 Pit latrines are the only toilet option for most residents in Erdenebulgan soum in Mongolia’s central Arkhangai province.

In 2017, a “Let’s Change Our Toilets” campaign sent teams across the country to try to broach the taboo topic through community workshops that reached 20,000 citizens.

“At the beginning of this work, people used to laugh that they couldn’t say the word ‘toilet,’” says Otgonchimeg Radnaajav, CEO of Mini Solutions Cooperative, the social enterprise that organized the campaign. Only now, with Mongolians becoming less squeamish, can public health programs clearly explain the hazards of pit latrines and the benefits of alternative models, she says.

After testing more than 20 outdoor eco-toilets suitable for Mongolia’s conditions, the campaign endorsed a waterless model made by Biolan, a Finnish company, that uses sawdust to absorb and separate waste. It costs about 800,000 togrogs ($261) and has been installed in 750 households since 2020, predominantly in Ulaanbaatar, the capital. Mini Solutions Cooperative offers interest-free loans to make the purchases more affordable.

“The work is just beginning, but we see it as a success,” Otgonchimeg says.

Another organization, WaSH Action of Mongolia, a nonprofit founded in 2015 to promote safe water, sanitation and hygiene, has replaced pit latrines in 350 Ulaanbaatar households, 100 rural homes and 12 schools with improved models that cost between 600,000 and 3 million togrogs ($200-$980). More than half the fees are covered by WaSH Action donors; recipients may contribute their portion by digging the holes and assembling the cabins.

Earlier initiatives had provided and installed the new latrines free of charge, but Shijirtuya Batjargal, a WaSH Action of Mongolia sanitation facilities specialist, says those recipients were less invested in ensuring the success of those projects. “There were issues that they would not treat their latrines with care and would not do relevant maintenance,” she says. “This is a lesson learned from our previous mistakes.”

This model has doors and locks so children won’t fall into the toilet, she says. 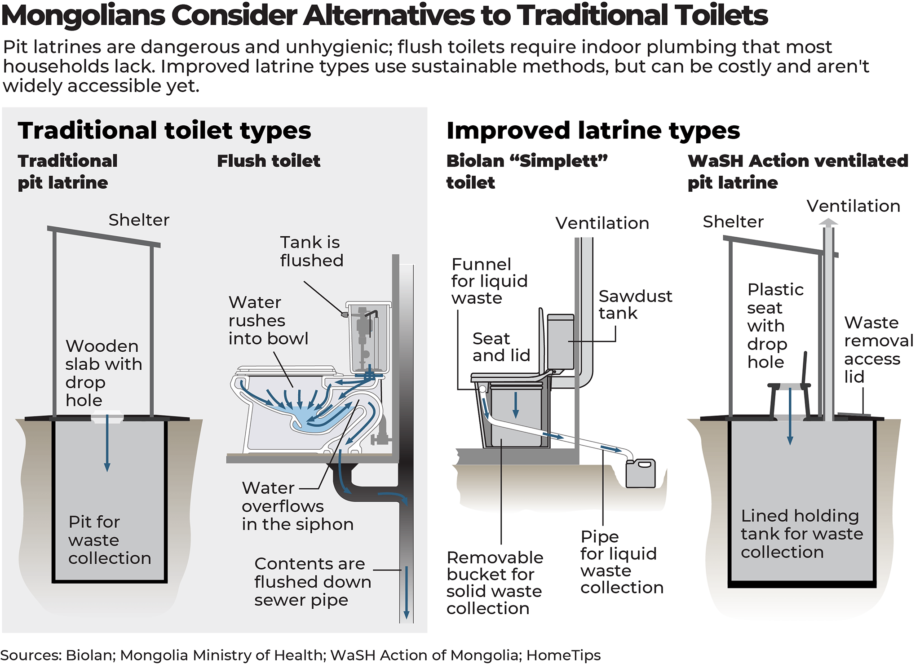 Between 2017 and 2021, 38 people fell into pit latrines nationwide, according to the National Emergency Management Agency. Ten died, including six children under the age of 9.

In March 2021, at a hospital in Arkhangai province’s Tariat soum, a woman gave birth while using the pit latrine, and the newborn fell into the 4-meter (13-foot) hole. Khalzan Baatarjargal, a police officer, rescued the infant.

“Though it felt disgusting, and I felt a little squeamish, the baby was crying, stretching out his hands, so I thought it was important to pick him up quickly,” he says.

“Families dig wells in their backyards, grow vegetables, and have pit latrines right next to them,” says Suvd Batbaatar, head of the Environmental Health Service of the National Center for Public Health. “The environment is polluted, but children lack the habit of washing their hands.” 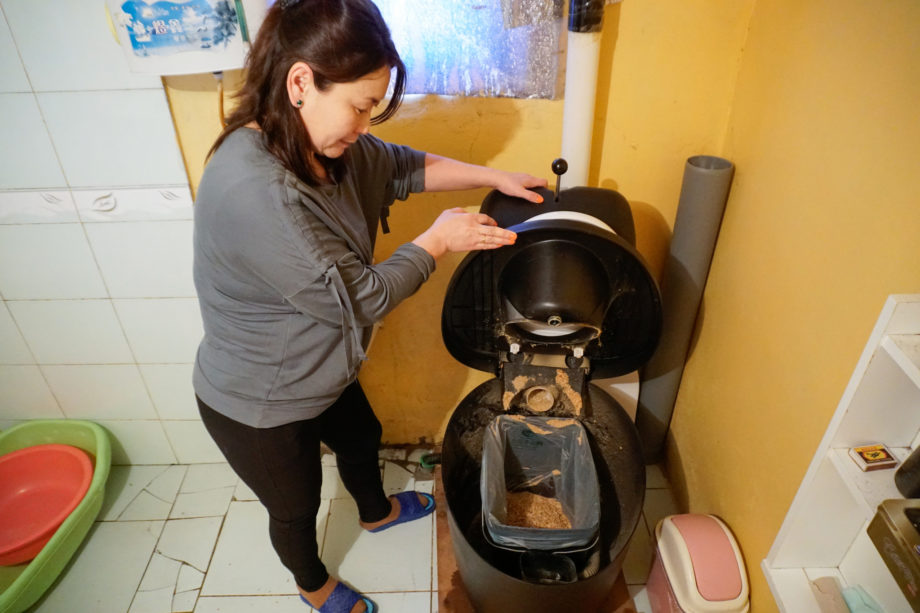 The pits freeze and expand in the country’s harsh winters; in summer, they defrost and overflow, and the soil and water contamination cause seasonal outbreaks of dysentery, hand-foot-and-mouth disease, and salmonellosis.

These intestinal infections accounted for more than one-fifth of communicable diseases nationwide in the last decade and caused seven deaths between 2018 and 2020, according to the National Center for Communicable Diseases.

After learning about the myriad dangers of pit latrines at a “Let’s Change Our Toilets” workshop, Amartuvshin Ragchaabazar, of Kharkhorin soum, Uvurkhangai province, applied for a loan and purchased a Biolan model.

“Now, we don’t have to go outside to go to the toilet,” she says. “It’s pleasant, like living in an apartment.”

Delgermaa Ulziibayar, 41, of Erdenebulgan soum in Arkhangai province, shares a pit latrine with her family of seven. They have been saving to buy an eco-toilet, but their household expenses rose during the pandemic, delaying their plans.

“The previous two latrines were full, so we covered them with dirt and built the current latrine two years ago,” she says. “Pit latrines smell a lot in the summer, so we add deodorant, salt, disinfectant and car oil to suppress the odor. But they still stink.”