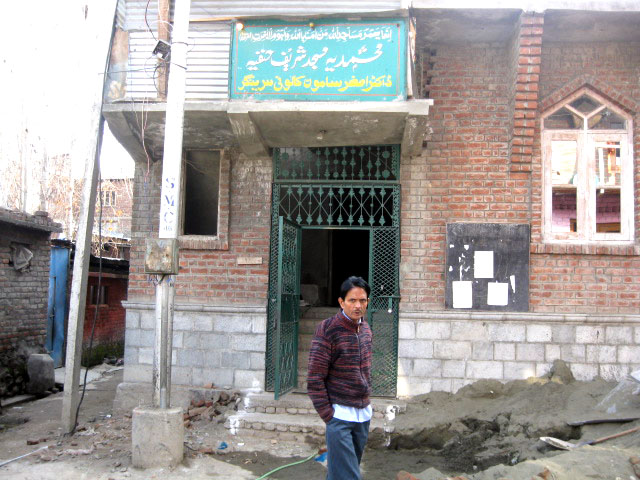 SRINAGAR, INDIAN-ADMINISTERED KASHMIR – “Everyone dreams, and so did I,” says 32-year-old Shabnam Bhat, a resident of Karachi, Pakistan, whose  dream was to be able to live in her husband’s family home after getting married.

Little did she know that it would take two years to clear the formalities to reach Indian-administered Kashmir, the birthplace of her husband, Jameel Ahmed Bhat. And it wouldn’t be the dream homecoming she had hoped for.

Bhat, now in his late 30s, was among the hundreds of youth who in 1994 crossed the Line of Control, a line that divides Kashmir between Indian and Pakistani administration.

“I crossed over from Gurez sector in north Kashmir’s Bandipore district,” says Bhat, who was just 18 at the time.

Bhat wanted to be part of a liberation struggle launched by the Jammu and Kashmir Liberation Front, the militant group that carried out attacks in Indian-administered Kashmir to mark the start of armed fight against Indian rule.

“It took me 16 hours to land on the other side of the L.o.C.,” recalls Bhat of the guarded fence. “We were seven in the group.”

He says he met many fellow Kashmiri youth who had already crossed the Line of Control in a camp at Muzaffarabad, the capital of Pakistani-administered Kashmir. There, they were undergoing arms training from various militant groups, which had initially received training from the Pakistani army.

“I stayed there for two months and changed my mind,” he says. “I decided to go to Pakistan and I, with the help of a friend, reached Karachi.”

Bhat says he found happiness in Karachi, the financial center and main seaport of Pakistan.

“I, somehow, managed a job of a bus driver there,” Bhat says. “I managed a room to live in on monthly rent. My monthly earning was good as I started to live a happy life.”

One morning, Bhat saw a girl walking down a Karachi lane. It was love at first sight, he says.

“I approached her cautiously,” he recalls. “And finally, I managed to persuade her to marry me.”

Bhat says his wedding day with his wife, Shabnam Bhat, who comes from a middle-class family in Karachi, was the most precious day of his life.

Within three years, Bhat became the father of two children.

“I got a job in a private school as a driver,” he says. “I used to ferry schoolchildren in the morning and evening as well. My salary was too good, and we were living a happy married life.”

“I used to talk to my parents, especially my father and mother on phone every week,” Bhat says. “I also informed them about my marriage and a new job. They were very happy to hear about it and prayed for my health and success.”

When the government of Indian-administered Kashmir announced a policy in 2010 to rehabilitate former residents like Bhat, he and his family jumped at the opportunity to move home. But he says it has been a homecoming from hell.

Thousands of citizens who left Indian-administered Kashmir as youths during the mid-1990s to protest Indian rule and took up arms in Pakistani-administered Kashmir or settled in Pakistan can now return under the state government’s rehabilitation policy. But those who have returned under this policy say they are treated as foreigners and can’t access even basic rights such as education and employment. Government officials laud the policy and ask dissatisfied returnees to file individual complaints. Meanwhile, others still living in Pakistani-administered and Pakistan are weighing the pros and cons of returning.

Since 1947, Kashmir has been divided into two parts disputed by India and Pakistan. Conflict in Indian-administered Kashmir erupted in 1989 when a separatist movement called for freedom from Indian rule. Some young people went to Pakistan and Pakistani-administered Kashmir, where they could obtain arms training from militant groups to wield in their fight for independence from India.

According to the Jammu and Kashmir Home Department, 40,000 people, mostly civilians, have died since the eruption of militancy in Indian-administered Kashmir in 1989. But the Jammu and Kashmir Coalition of Civil Society, an independent rights organization that unites civil society groups in Kashmir, states that more than 100,000 people have died and more than 8,000 have disappeared during the last two decades of conflict in the region.

Despite the risk of crossing over a fence heavily guarded by the Indian army on one side and the Pakistan army on the other, young men began crossing over in small groups in the 1990s. In no time, dozens turned into hundreds, and hundreds became thousands, says Javaid Ahmed Mir, a former militant commander for the Jammu and Kashmir Liberation Front who crossed to Muzaffarabad in 1989.

In the summer of 2010, the population of Kashmir was boiling after a series of  young people died at the hands of Indian forces during anti-India protests. In order to quell the situation, Jammu and Kashmir Chief Minister Omar Abdullah announced a new effort, dubbed a rehabilitation policy for people who wanted to return to their homes from Pakistan and Pakistani-administered Kashmir to live a peaceful life.

“This policy is for the youth, who, instead of taking up guns in their hands, ended up in living normal life in Pakistan and Muzaffarabad,” Abdullah announced during a press conference in Srinagar in May 2010. “Many of them are in touch with their families and want to return with their families, as they are married now.”

His statement triggered a storm in both Pakistani- and Indian-administered Kashmir. Those still advocating for armed resistance called the policy a surrender to Indian rule and demanded that no one follow it.

Amid strong criticism from the United Jihad Council, an umbrella organization for armed groups fighting against Indian rule in Indian-administered Kashmir, those interested began responding to the rehabilitation policy, though discreetly.

At least 175 families have returned from Pakistan or Pakistani-administered Kashmir since the announcement of the rehabilitation policy in 2010, according to the Jammu and Kashmir Home Department.

Bhat was among them.

“I decided to return home soon after the policy was announced,” Bhat says. “I chose Nepal route to reach India, as it would have been a risky business to cross through L.o.C., which is heavily guarded.”

It was September 2010 when he secured passports for his family, and they reached his home by the end of the month.

“It took everybody by surprise at my home, as an 18-year-old boy had turned into a strong man with a long beard,” Bhat says.

The first question he faced was, “Who are you?”

“It was my father, who did not recognize me at all,” Bhat says.

When Bhat uttered his first word, “Abba,” which means “Dad,” in the Kashmiri language, his father recognized him immediately.

Bhat’s mother, Sara Bhat, who had been busy in the fields, came rushing with cow dung all over her clothes and hands.

“My mother recognized me in a first go,” Bhat says. “She cried and cried hard.”

In no time, the entire village was at Bhat’s home, singing traditional Kashmiri songs and showering him and his wife and children with sweets and almonds.

“The first thing I did was that I offered special prayers to thank God for the safe return of my son,” his father, Abdul Rahim Bhat, says.

“Everything was celebrated on the same day,” the father says. “It was the celebration of my son’s marriage, the birth of his two kids and the arrival of the bride. Kashmir has a tradition of marking all these events with mega celebrations.”

Shabnam Bhat received hundreds of kisses on her forehead and cheeks.

“I was shocked to see the reception,” she says. “I was surprised to see the house of my husband. It looked awesome to see a big house, sprawling apple orchards, a folk of cow and sheep in the lawn and typical songs sung by the village women.”

But on their second day home, a special team of police knocked on the door and asked Bhat to come to the police station.

“I rushed to the concerned police station,” Bhat says. “I gave my full details, the details of my wife, her name address, names of her parents, their phone number.”

The police seized his and his wife’s passports on the spot, Bhat says. He must now visit the police station every month as part of a requirement set by the Criminal Investigation Department wing of police to monitor those who have returned from Pakistan and Pakistani-administered Kashmir.

The Bhat family has been denied the government-issued certificate that confirms a person is a resident of the state of Jammu and Kashmir. Bhat says he can’t apply for a job, nor can his wife, who has a bachelor’s degree in science. Their children, who were born in Pakistan, are being denied admission to school on the pretext that they are foreign nationals.

“Our life is hell,” Bhat says. “The future of our kids is in danger. Had we known this would be our fate, we would have never returned.”

Bhat and his wife are not alone in their frustration.

Kulsum Tahir returned to Indian-administered Kashmir with her husband, Muhammad Tahir, and four children under the same policy. They say they also do not have state certificates, preventing them from accessing basic rights.

“We feel like [we are] living in a fortress,” Tahir says. “I can’t even talk to my parents on phone, as no one can make calls to Muzaffarabad from this side.”

She sobs as she continues.

“My kids are denied admission in school,” she says. “We are like refugees. Neither do we have passports, nor any identity now. Whom to approach, we don’t know.”

She and her husband recently tried to meet with the chief minister of Jammu and Kashmir to discuss these problems but were unable to do so.

“I was denied entry on the pretext that I am a foreign national,” she says.

Nasir Aslam Wani, Jammu and Kashmir minister of state for home, says the fact that so many people returned is a success for the government.

“Many families are coming, and many have already arrived,” Wani says.

Wani says these families should meet with government officials individually and explain their problems.

“We will try to sort out their problems individually,” he says of issues raised with the rehabilitation policies. “We can’t listen to all in one go.”

Meanwhile, other families are waiting for their loved ones who are still away.

“Many youth have returned here,” she says. “I hope my son will also come.”

She says her son wants to return and has applied to the rehabilitation program.

“But keeping in view the condition of those who have returned, I am very apprehensive of my son’s return,” she says.

There is no data available with the Jammu and Kashmir state government on how many people who left as youth are living in Pakistan and Pakistani-administered Kashmir.

“We don’t have the data,” says Braj Raj Sharma, the principal secretary in the state’s Home Department. “But we keep a proper record of those who return so that we can say with authority how much have returned.”

He says the number of youth currently looking to return ranges between 500 and 600 based on the applications the state has received.