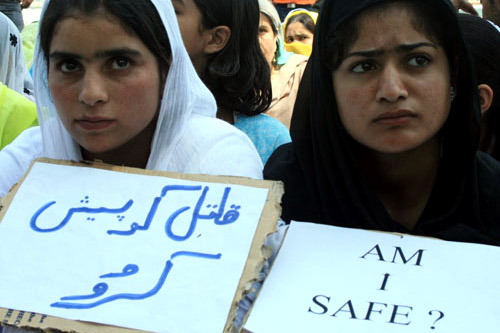 SRINAGAR, INDIAN-ADMINISTERED KASHMIR – At the lone Women’s Police Station in the Kashmir Valley, a woman in a veil peeps out from the door of the office. After some initial hesitation, she approaches a uniformed woman constable inside. Handing a piece of paper to the police officer, she says she would like to file a domestic violence complaint against the man whose name is written on the paper.

The constable sitting behind the desk asks her to fill out an application first. Another woman constable enters and asks the seated constable what the woman, who is waiting outside the room, wants. As the first constable replies, they both laugh.

The woman then re-enters the room, and a male officer asks her what she wants. He listens to her story and then asks her to wait to meet the officer in charge of the police station in Srinagar, the summer capital of Jammu and Kashmir state.

The woman, who declined to give her name for safety reasons, says she used to live in a village in Bandipora, a district that borders Srinagar to the west, some years back. She says her husband used to beat her often and eventually threw her and her children out of the house.

She took her children to Srinagar, where she found a job as a domestic helper in a household. She and her children stay with the family, but she says they are not free from the wrath of her husband.

“He comes on one excuse or another to the house now and beats me,” she says. “He wants me to go back to live with him in the village. Why should I when he threw me out of the house in the first place?”

She says that she is fed up, so she came to file a complaint at the police station so that she and her children can live in peace.

In doing so, she has done what most women in her situation choose not to, as domestic violence is not openly discussed in Kashmir.

Most people who experience domestic violence say they would rather endure the abuse instead of bringing shame to their families by reporting it. The state adopted the federal law against domestic violence two years ago, has two women’s police stations and a women’s commission to encourage people to seek care and justice. But awareness is still low, especially in suburban and rural areas.

The country and state define domestic violence as any act, commission or omission of conduct that harms, injures or endangers the health, safety or life of a family member. The definition includes physical sexual, verbal, emotional and economic abuse.

More than half of women in India ages 15 to 49 say that a husband or partner is justified in hitting or beating his wife or partner under certain circumstances, according to a National Family and Health Survey from 2005-2006.

Domestic violence and rape create more of a risk for women around the world ages 15 to 44 than cancer, car accidents, war and malaria, according to the World Bank.

But unlike the woman who filed a report at the police station, most people who experience domestic violence keep quiet. Because of this culture of silence, Saba Malik, who requested her first name be changed for privacy reasons, says she had never heard firsthand of an account of domestic violence until it happened to her.

The only child of her parents, Malik was well-educated and financially independent. She was introduced to the world of domestic violence on the fourth day of her marriage to her husband.

“I was sleeping when he grabbed my head and banged it on the wall,” she says.

She says she hadn’t done anything to provoke him.

“I was shocked and had no clue what had I done to irk him,” she says. “I did cough a bit though.”

“He would say he was sorry and ask for forgiveness,” she says. “I thought he might have some tension due to his work and consoled myself thinking that he will get better.”

She has never talked about it to her parents in the six years of her married life. At work, she would hide her bruises with a scarf and sunglasses or make up stories to explain them.

“I didn’t know what to do,” she says. “It’s not something one talks about to others in our society.”

But Malik says that she had had enough by the time she became pregnant with her first baby.

Now a mother of two children, Malik says that he was taken aback and backed off. That is the only ploy she has been employing since.

She says she would be too ashamed to seek help from her parents and relatives because the matter would bring shame to the couple and their families.

She says that visiting a psychologist or psychiatrist in Kashmiri society is also taboo. Marital counseling especially is not offered.

“I don’t think there is a place for counseling in Kashmir,” she says. “I tried to counsel him myself though.

She says that she is the only one in the relationship who is looking for a solution. Her husband is not ready to accept that his behavior is a problem. It’s always the woman who has to suffer and adjust, she says.

Like Malik, most people who endure domestic violence in Kashmir suffer silently because they fear it will bring disgrace to them and their families.

“Women keep it to themselves,” she says.

She says she imagines that if it is happening to her and she’s keeping quiet about it, other women must also be trapped in similar situations.

“Only when a woman gets divorce[d], then we hear that she was being beaten by her husband,” Malik says. “Otherwise, no one shares.”

Rihana Tabasum, who requested her name be changed for privacy reasons, got married 20 years ago. Like Malik, she says she has been suffering similarly from the early days of her marriage because her husband is abusive.

“He is very suspicious and doesn’t trust me at all,” she says. “He checks my phone regularly, receives a call if the number is unknown and asks all sorts of questions regarding my activities and then beats me on the slightest pretext.”

Her husband also beats her in front of her mother and two teenage children. Unlike Malik, she has told colleagues at work about the abuse. But colleagues say she must do more.

“She is doing nothing about it,” says Sabeeha, one of Tabasum’s colleagues, who declined to give her last name. “She just shares her feelings and plight with us and cries and cries.”

Tabasum says she bears the abuse for the sake of her children.

India passed The Protection of Women From Domestic Violence Act in 2005, which did not apply to Jammu and Kashmir state. The state passed the act in 2010.

The Women’s Police Station in Srinagar was set up in 1998 to make women feel comfortable to approach the police to file complaints.

Gulshan Akhtar, the officer in charge of the police station, says domestic violence is the most common complaint.

“All the cases I receive are related to domestic issues, and among them, the maximum number of cases are of domestic violence,” she says.

“Earlier, women were hesitant to come forward,” she says. “But now, they are quite comfortable in approaching us.”

Still, she says many people wait too long to report the abuse, coming to the station as a last resort when the torture has crossed all limits. She says women also are hesitant to pursue cases in the judicial system.

“We still have women saying that they don’t want to go to court, as it is looked down upon in our society,” she says. “We can’t help these women, as our recourse is legal.”

But she says that even the presence of the women’s police station has been a deterrent.

“Men now think 10 times before doing any such thing, as they are aware there will be consequences,” Akhtar says.

Akhtar says some people seek help from the National Commission for Women, a government body that works for the welfare of women.

“Some of them approach the Women’s Commission, where they counsel the people involved,” she says.

Hafiza Muzaffar, secretary of the Jammu and Kashmir State Commission for Women, the state chapter, says the commission aims to raise awareness that domestic violence is illegal.

“Those who are educated have some awareness,” she says. “But overall, the awareness is little, especially the legal awareness. That is what we do. We tell them about the legal provisions while counseling the women who come to us.”

Muzzaffar says the commission received 5,000 cases of domestic violence in 2011. They have settled around 1,500 of them so far.

Nadeem Qadri, a lawyer and a social activist, says awareness of domestic violence is especially low outside Srinagar.

“The incidences that happen in the city get reported,” he says. “But the ones that occur in distant suburbs and rural areas don’t get reported. Nobody is concerned.”

He provides a recent example of unreported abuse when he went to visit a relative in a hospital on the outskirts of the city.

“There, I saw a woman badly beaten by her husband,” he says. “The incident wasn’t reported, as majority of Kashmiris don’t know what they can do.”

He says that people who experience domestic violence should have more access to women psychologists and legal counselors who can lead them through the legal, judicial and healing process.

“The legal provisions are there, wherein special protection under constitution has been given to women in such cases,” he says. “But what we need is awareness and implementation.”