Skip to main content
The story you are reading was published on Friday June 26, 2015. To read more recent stories click here. 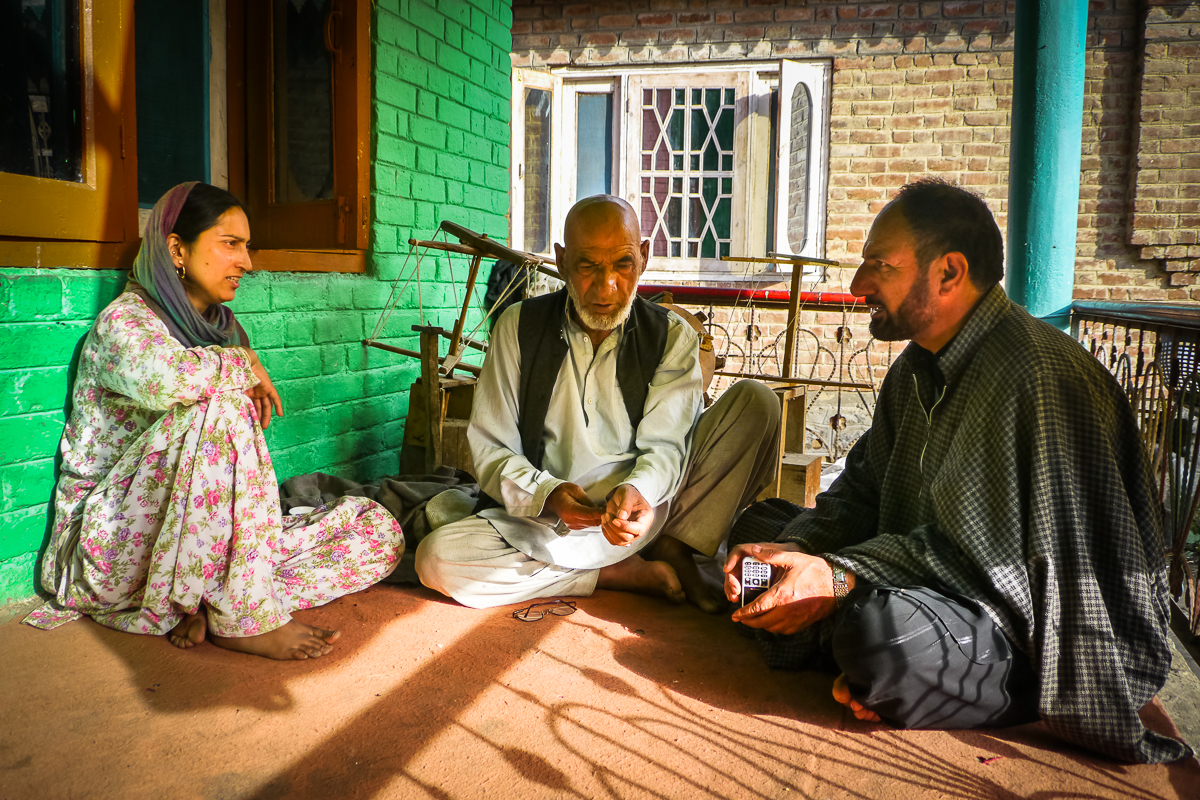 HAJAN, INDIAN-ADMINISTERED KASHMIR — Ghulam Nabi Darzi carefully flips through his worn-out diary and, finding a page on which he noted the qualities of an eligible young man, he passes the diary to a young woman seated before him at his home office in Hajan, a city in Bandipora district in Indian-administered Kashmir.

Darzi, 48, is a matchmaker: He provides details of potential brides and grooms to families and brokers marriage agreements.

In Kashmir, most marriages are, in some sense, arranged, though brides and grooms have much more say in the matter than in past generations. Even when partners essentially choose each other, parents will often engage a matchmaker to negotiate a dowry and formalize the arrangement.

Rafia Jan, 25, and her mother, Zarina Begum, have come to consult Darzi about a prospective groom for Jan.

Darzi takes the diary back and, occasionally glancing at his notes, tells Jan and Begum about the man, including his income, his mother’s temperament and the size of his family.

At the end of his monologue, Darzi glances at Jan. She shakes her head. The man is eight years older, and she does not agree to the proposed marriage.

“Tell me what type of a boy you want – handsome or prudent?” Darzi asks Jan in a joking manner.

Unamused, Jan flashes her dark eyes at Darzi as she angrily responds, “Both!”

My family didn’t end up in any debt or come under any pressure. The marriage happened simply, and everyone enjoyed it. — Naila Rasool, 32, bride

Darzi reopens his diary and suggests a few names and addresses of prospective grooms. He asks Begum to verify their details through her network of neighbors and relatives. He advises Jan to take her time in evaluating the men.

Begum tries to pay him for his services, but Darzi refuses. Ever since the floods first hit Kashmir in September 2014, causing widespread economic hardship, Darzi has provided his services free of charge.

“You do not need to worry for money,” he tells Begum. “You select any groom from the suggested list of addresses. It is my job to properly verify your selection.”

As the mother and daughter leave his office, Darzi encourages Jan to be hopeful; he tells her he will find her a prince.

Darzi, who arranges marriages in the Bandipora district of Indian-administered Kashmir, encourages an austere approach to weddings.

Because the floods in September 2014 and March 2015 destroyed many livelihoods, upsetting family budgets, Darzi urges families not to request or offer dowries or put on extravagant celebrations.

Many young Kashmiris are delaying marriage for lack of funds, says sociologist Bashir Ahmad Dabla, a professor at the University of Kashmir.

Dabla found that the rising cost of marriage is the primary reason for delayed marriages.

First, the bride’s family traditionally must come up with a suitable dowry. Dowry sizes vary with income level; a middle-class family might spend 500,000 to 1 million rupees (roughly $8,000 to $16,000) on gold jewelry, furniture, kitchen accessories and clothing for the groom and his family.

In addition, the groom must secure a regular income sufficient to support a wife and family, and both families shoulder the cost of an expensive wedding celebration.

Darzi, following in his father’s footsteps, has worked as a matchmaker since 1996. Like his father, Darzi earns a modest income – which he felt uncomfortable disclosing – embroidering pherans, a traditional loose unisex gown and a popular bridal gift.

Working across Bandipora and other areas of the Kashmir Valley, Darzi has arranged about 315 marriages to date.

“I am doing matchmaking as a social service,” Darzi says.

He seeks blessings from his client families, and that makes him happy, he says.

In the aftermath of the September floods, Darzi heard people say that extravagant weddings set an impossibly high standard, prompting families that could not afford lavish events to delay their plans.

September, a time of moderate weather when far-off relatives return to the valley on holiday, is traditionally the peak wedding season in Kashmir, Darzi says.

But during the 2014 wedding season, many poor families in Bandipora, Srinagar and Baramulla districts suffered under the heavy burden of large dowries and extravagant weddings.

Darzi pledged to do what he could to ease their burden.

He spoke with families, encouraging them to forego dowries and to host simple marriage ceremonies, he says. Many vowed to make their weddings affordable and modest.

But Darzi went a step further, providing his services free of charge. Ordinarily, a matchmaker is paid primarily by the families of brides.

Darzi had 15 confirmed marriages arranged before the September floods hit. Eight families canceled their weddings amid the disaster, but seven marriages were solemnized in an austere manner.

Naila Rasool, 32, entered a marriage arranged by Darzi in October 2014.

Her groom did not request a dowry, and the wedding was a simple affair for about 50 close relatives and friends, Rasool says.

She dressed simply on her wedding day. She didn’t decorate the house. No caterers scurried about setting tables or serving a variety of dishes. No professional musicians performed. The guests enjoyed tea and simple refreshments.

The floods were hard on Rasool’s family. Her father’s handicraft shop in Srinagar was submerged for weeks, destroying his stock and forcing him to close shop.

Rasool’s family chose not to offer a dowry. Matchmakers the family had consulted previously all insisted that the family offer a dowry; their recommendations included cash, gold jewelry and a car.

“My family didn’t end up in any debt or come under any pressure,” Rasool says. “The marriage happened simply, and everyone enjoyed it.”

With the money it saved, Darzi’s family began renovating her father’s shop in April. He hopes to reopen the shop by the end of July.

Darzi is inspiring other matchmakers to advocate simple weddings.

Abdul Majid Dar, 40, of Sadunara A village, 8 kilometers (5 miles) from Hajan, has been a matchmaker for three years.

Matchmakers in Kashmir usually take in fees and gifts from the bride’s family, Dar says.

“The uniqueness of Darzi’s work is that he simplifies marriages,” Dar says. “I have not ever seen or heard of anyone like him who offers free services.”

“I wish to become like him and earn respect, instead of making a mere business out of marrying off people,” Dar says.

Darzi says he did not expect to earn the respect of his community but now cherishes it.

“Becoming a matchmaker is the best thing that has ever happened to me,” Darzi says. “Everyone respects me. It is overwhelming.”

Darzi’s wife, Poosha Bano, 40, is proud of her husband’s work and the high regard people have for him.

“It is not only because of free services,” Bano says. “But with sincerity he finds the match without hiding any details or telling a lie to tie a knot.”

Darzi and Bano have four sons and two daughters. Bano hopes that at least one son will follow in the footsteps of his father and grandfather.

In Indian-administered Kashmir, most formal matchmakers are men. Matchmaking is essentially a negotiation between families; in this patriarchal culture, families are customarily headed by men – and they usually prefer doing business with other men.

Female matchmakers informally mediate marriages and are not usually compensated.

Not everyone in Bandipora district believes weddings must be simple.

“Why should one not celebrate the weddings with lavishness?” yells Abdul Rashid Dar, a local wedding contractor who provides catering, tents, furniture and decorations.

Abdul Rashid Dar believes that if people are willing to spend money on clothes, travel, food and assets, they should not hesitate to spend freely on weddings as well.

But Darzi is convinced of the need for austere weddings. He plans to offer his services free for the duration of 2015. That will give families time to recover from their economic losses, he says.

So far this year, he has arranged 15 modest wedding ceremonies, Darzi says.

“I will continue to inspire people and instill a change through austere weddings,” he says.

Abdul Majid Dar and Abdul Rashid Dar are not related.