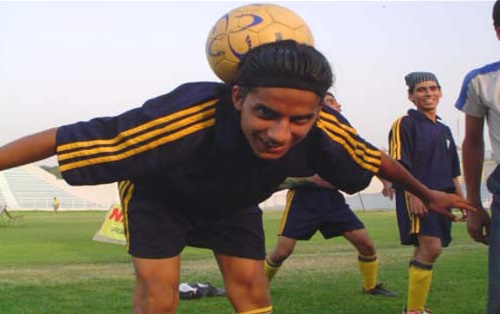 SRINAGAR, INDIAN-ADMINISTERED KASHMIR – Musadiq Mushtaq grew up in a family who played cricket – the craze of the subcontinent. His father, uncles and brother all played cricket. He did, too, until one man came to Srinagar, Kashmir’s summer capital, and opened his eyes to football.

Life changed for Mushtaq and many boys here when Juan Marcos Troia, an Argentina-born football coach, came to Kashmir to start his own football academy. An athletic man with spiky hair, Mushtaq says that Troia, or “Marcos,” as he is popularly know here, has taught him more than just how to play the sport.

“I am a changed man now,” Mushtaq says. “For me, he [Troia] is the guy who changed my life. He and his family mean a lot to me.”

Mushtaq says learning to play football, or soccer as it’s called in some countries, helped him learn self-control. He says it has also helped him learn to be tolerant of other cultures, aided by a year he spent training with and playing for a football club in Brazil.

“I was so short-tempered, but now I have learned not only to control myself, but also tolerance and adaptability to different conditions and cultures,” he says.

Troia has revived football in Kashmir, having trained 1,000 young men during the past few years. Players say he doesn’t just teach them the game, but also how to carry themselves and see new perspectives in the world. There are some challenges, such as violence in the area, but Troia says that makes it all the more important to help the region’s youth.

Young people in Kashmir have grown up in conflict, as India and Pakistan have long had a dispute over the region. Youth became especially engulfed by the conflict last summer, when more than 100 people – mostly youth – were killed when police fired on civil protesters in Indian-administered Kashmir. For youth, stone pelting has become a symbol of resistance here.

“We started the organization with the aim to promote football in this region [India],” he says. “We wanted to engage youth to bring about a positive change in the society.”

He says that sports are much more than just games. He says they have the capacity to educate young people about so many things in life.

“From discipline and how to stay healthy, sports can teach human values and moral education,” Troia says.

Through ISAT, Troia trained youth in and around the Indian metropolis of Delhi from 2002 to 2006. Apart from the local boys, he also trained many Afghan and Iranian refugees registered with the Office of the United Nations High Commissioner for Refugees.

Seeing the program’s success in Delhi, Troia and Pedroso started looking for new places to expand it. They say they aimed to set up football clubs to participate in the official leagues and tournaments.

It was at this time that the Jammu and Kashmir Football Association, JKFA, invited ISAT to train young people in the area in football. Troia says he flew to Kashmir in September 2006 to check things out.

“We have received invitations from so many states of India, but things in Kashmir were conducive,” he says.

He says that the climate was more appropriate for soccer and also reminded him of home, where they have a harsh winter, which he couldn’t find in the rest of India.

He says that Kashmir’s history of football and the game’s popularity in the region only made his decision easier. He says he came to Kashmir in 2007 to revive that passion.

“Football has been a popular sport in Kashmir from long [ago], but the conflict in the region had eliminated the chances of the youth engaging in it,” Troia says.

More than 300 boys registered for the program before Troia moved to Kashmir. The overwhelming response made clear the Kashmiri youth’s love for football.

In the years since, Troia has trained around 1,000 youth in his football academies.

“Even though football was not [new] to Kashmir, there was a scope of introduction of new practices and techniques,” Troia says.

Mushtaq credits Troia for bringing in new ideas and concepts of the game in Kashmir. He says he also opened a new career path for some of them.

“Earlier, not many thought of playing professional football in Kashmir,” Mushtaq says. “Marcos changed all that.”

Troia says that he sees great potential in Kashmiri youth.

“They are quick learners and can do wonders,” he says.

Troia says that beyond football itself, the sport also enables young people here to learn about other cultures.

He has arranged an exchange program with Brazilian football clubs in which Kashmiri players go to train in Brazil while Brazilian players come to train in Kashmir.

“I wanted the players to have international exposure and competition so that when they come back they are better players,” Troia says.

Mushtaq, who participated in this program, says that being exposed to other cultures and new experiences also helped him off the field. He says it taught him to be more tolerant and to overcome a short temper.

“Going to Brazil was [a] life-changing experience for me,” Mushtaq says. “Not only in terms of football training, I learned so much about different cultures as well as life in general.”

Apart from the two Kashmiri boys who went to Brazil, players from Brazil came to play for the clubs in Kashmir. They say they have benefited from the program, too. One, Reuel Dos Santos Correa, became the fifth Brazilian football player to be transferred from Brazil to Kashmir to play on Jammu and Kashmir’s official football team, according to ISAT’s website. He can now play for any Indian club.

“I am happy to be here,” says Correa, who is currently living with Troia’s family. “Last year, I couldn’t play much, as Kashmir was under a state of unrest and we lost the playing season, but this year I am looking forward to playing [the] season here.”

But there have also been challenges in operating in a conflict zone. There was a third Kashmiri boy selected to go to Brazil, but he couldn’t go. The boy, Basharat Bashir, was refused a passport because his father was alleged to be a fighter with an armed group.

“We fought hard for the issuances of his passport,” Troia says. “It eventually came, but the time for the training had gone. The program was for 17-year-old[s] and [by] the time the passport came, he is 20.”

Troia says that he is still trying to send him to Brazil as a confidence-building measure to compensate for his loss.

There are other problems, such as lack of infrastructure, commitment and support from the government that Troia has worked relentlessly both on and off the field to overcome. When one of his players was arrested last year, Troia and his other players rallied behind him and ensured his release.

Troia says he has also seen his share of troubles himself. Sharing many features with the locals, Troia says police once beat him during a disturbance in the city because they thought he was a local pretending to be a foreigner. Local police were not available for comment on the issue.

His three daughters go to the local school, but although Troia is religious, he says he avoids going to church here.

“I have seen when a foreigner comes, the first question that comes in the minds of people is, ‘Has he come to convert us?’” Troia says, laughing.

Troia says rivalry between different football clubs has also created problems for his family. He says his two dogs were poisoned in his own house earlier this year and that he received death threats over the phone last month. According to local media reports, after his dogs were killed and he received a death threat, Troia may leave Kashmir.

But his wife says he stays calm – maybe a little too calm.

“He is such a patient and peaceful man, I at times get angry with him on not reacting to certain things,” she says.

Troia says that sports can help the young people who have grown up amidst conflict.

“I want to involve youth in sports so that they are protected from many fallouts of the conflict in the region,” says Troia, adding that such activities can refresh them.

He says that players’ families have all been supportive. Many parents have approached him to thank him for what he is doing for their children.

Indian director Ashvin Kumar has even made a movie, “Inshallah, football,” about Troia’s success and challenges here, such as the denied passport. The documentary, which tells the story of a young Argentinian coach who works to get stone-pelting youth off the streets and onto the football field, is currently being screened in film festivals around the world.

JKFA has announced plans to continue to expand football in the area by setting up its own football academy – for the first time ever – at eight centers in Srinagar, according to Greater Kashmir, a local newspaper.

Mushtaq says he firmly believes that the importance of sports far exceeds its usual benefits in conflict zones like Kashmir in helping to keep the youth on track.

“He is here to make a difference,” he says of Troia.