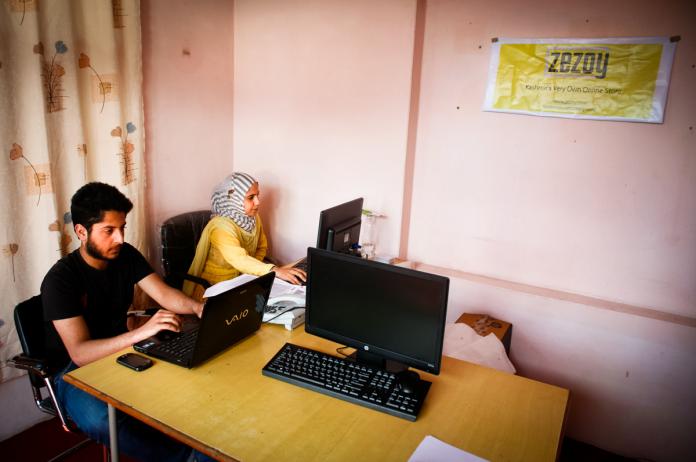 SRINAGAR, INDIAN-ADMINISTERED KASHMIR – The office is bustling, with phones ringing and workers packing items into boxes for shipment overseas. This all began with an idea: promote Kashmiri crafts to the international market.

“In any promotional event of local crafts on national and global television channels, I had never found Kashmir anywhere,” says Muheet Mehraj, 25, seated in an office in Srinagar city, the summer capital of Jammu and Kashmir state. “I was not sure why was Kashmir missing despite having many unique handmade crafts.”

In late 2011, Mehraj and his friend Kashif Ahmad Khan, 30, visited dozens of artisans in Srinagar and surrounding areas who made shawls, woolen clothes, willow work, rugs and papier-mâché products. They met with wood carvers and copperware craftsmen.

The artisans were handling commerce as they had for generations, Mehraj says.

“They were not getting enough returns,” he says. “They even didn’t know how to attract non-local customers.”

Many of the products of these largely unknown artisans remained unsold for months in small local shops, Mehraj says.

Recognizing the artisans’ need to showcase their work, Mehraj and Khan set up Kashmirbox.com, a website that sells the work of Kashmiri artisans.

They set up the online shop to establish themselves as online entrepreneurs as well as to help artisans find better markets, Mehraj says.

Since KashmirBox began, other young Kashmiris have set up online businesses to help preserve their cultural legacy while creating sustainable economic growth.

Kashmiri artisans are globally recognized for their unique handicrafts. The sector is a cornerstone of the state’s economy.

The artisanal industry in the Kashmir region employs about 500,000 people and has an annual turnover of more than 20 billion rupees ($325 million), says Sajad Bazaz, spokesperson of the J&K Bank, a private bank with headquarters in Srinagar.

“But, unfortunately, this sector is full of challenges,” he says.

The earning potential of Kashmiri artisans varies widely, depending on skill, resources and business acumen.

On average, an artisan who relies on shopkeepers and middlemen for his raw materials will earn about 1,000 rupees ($16) a month, Bazaz says. One who can purchase his own materials can earn 1,000 rupees a week.

The industry has so failed artisans that many are unable to even feed their families, says Bazaz, who has observed artisans’ struggles for about 10 years as a columnist for Greater Kashmir, an English-language daily newspaper published from Srinagar.

The government needs to invest in the industry, he says. It should fund infrastructure development and financial assistance programs, promote Kashmiri crafts and help artisans stay current with international consumer trends.

Online entrepreneurship opens a broad sales avenue to artisans who previously relied on conventional sales through shops, says Bazaz, who estimates there are no more than 10 e-commerce sites based in Kashmir.

And online shopping is booming in India.

About 35 million Indians shopped online in 2014, and that number is expected to almost triple to 100 million online shoppers by 2016, according to a November 2014 survey by Google and Forrester Consulting.

Beigh, co-founder Nabeel Kamili, 25, and other colleagues conducted an informal survey of Internet use and online shopping habits in the Kashmir region before launching their site in October 2013.

The survey turned up more than 100 Internet cafes in Srinagar. It found that people in both urban and rural areas access information and services online.

Zezoy.com, established to enable Kashmiris to shop online, is a small operation in Srinagar. It operates with five staff members and some contract workers.

The company offered about 700 products when it launched. It has since doubled that number.

Mehraj agrees the growing accessibility of technology enables e-commerce to develop in Kashmir.

“There is undoubtedly more outreach in online businesses in Kashmir nowadays, as everyone carries a mobile Internet,” he says. “Most of the youngsters are inclined towards online selling and buying, rather than doing it offline.”

The August 2014 Nielsen Global Survey of E-commerce expected worldwide e-commerce sales would reach $1.5 trillion by the end of 2014.

Almost half of global respondents reported they intended to purchase clothing using an online device in the next six months.

Online buying rates in Asia-Pacific are the highest of any region; 57 percent of people in the region buy clothing, accessories and shoes online.

It sells to customers in Kashmir, India, other Asian countries and a growing number of shoppers in Saudi Arabia, Qatar, the United States and the United Kingdom.

In 2011, KashmirBox had two employees, Mehraj says. As of this year, it employs 12 full-time staffers. It sells the work of nearly 3,000 artisans.

KashmirBox provides a complete service to artisans, Mehraj says. It handles purchasing transactions and delivery. While KashmirBox keeps an administrative fee for its services, it pays artisans above-market prices for their crafts.

He has been producing crafts for KashmirBox for two years. The partnership has dramatically improved his income, he says. Because KashmirBox has become so profitable for him, he now makes products for his shop-based customers only when they place special orders.

In the past, when Ahmad sold his work to shops, middlemen took a large share of the profit, he says. The middlemen paid artisans in small installments, and only after artisans repeatedly demanded payment.

He often thought of switching to a different trade because he earned so little from his artisanal work, he says. But with KashmirBox, he can see the price at which his items are sold, and he is paid promptly.

“We are getting a global market through the website,” he says.

Ahmad appreciates that KashmirBox identifies him as the creator of his products.

He has enjoyed participating in videoconferences with KashmirBox customers who placed special orders for his work.

The recognition bolsters his sense of achievement.

“I started to love my work and craft more,” Ahmad says.

“We have our customers from Kashmir as well as tourists from different parts of the world,” says Ghulam Ahmed Sofi, 50, a shopkeeper in Srinagar.

“I don’t see Internet selling as a threat to our sales and market,” he says. “They have their own client base, and we have our own.”

The Directorate of Handicrafts Development Department of Jammu and Kashmir is developing a website to promote and sell artisanal products, says Tariq Ganai, director. To educate consumers, it also will offer tips on distinguishing between genuine Kashmiri crafts and fake products.

“If youngsters sell online products while maintaining quality and help artisans, it will give a boost to the entire industry and generate more opportunities for the youngsters as well as artisans,” Ganai says.

But government alone cannot meet all of artisans’ needs, he says. Lenders and insurance companies, for example, can offer concessionary rates.

“It is a huge industry, and problems are multiple,” Ganai says. “Every year we host awareness camps, road shows in various countries, and conduct trade fairs and invite outside travel companies to promote Kashmir.”

He launched an incubation center, Kashmir Business Factory, in 2011 to help launch startups.

The center facilitated the launch of one successful startup, E-Resolute Consultancy and Services, which provides Web-based solutions. Several more startups are in development.

Mehraj and Khan hope to scale up the number of orders they are taking, from 20-30 per day to 100-150 a day, by increasing the number of products they offer. By partnering with larger companies outside Kashmir, they also plan to market their site more widely online.

KashmirBox suffered a setback in September 2014 when severe flooding hit the Kashmir region.

The flooding destroyed the craft products of more than 6,000 artisans, Ganai says. About 1,200 showrooms, which sell work commissioned from artisans, also were damaged.

But since December 2014, KashmirBox is gradually rebuilding its customer base.

Mehraj also hopes KashmirBox can change the traditional wage-based payment system for artisans, enabling the producers to share in the profits of the industry.

A Pashmina shawl, for example, sells for about 60,000 rupees ($975) online. But under the wage-based system, in which a shop owner provides raw materials and requests a handmade product in a set period of time, the shawl’s maker only earns about 70 rupees ($1.14) a day, Mehraj says.

“We want an end to the wage system and to give the genuine profits to our artisans,” he says.

Aliya Bashir, GPJ, translated some interviews from Urdu and Kashmiri.