Skip to main content
The story you are reading was published on Thursday December 6, 2012. To read more recent stories click here. 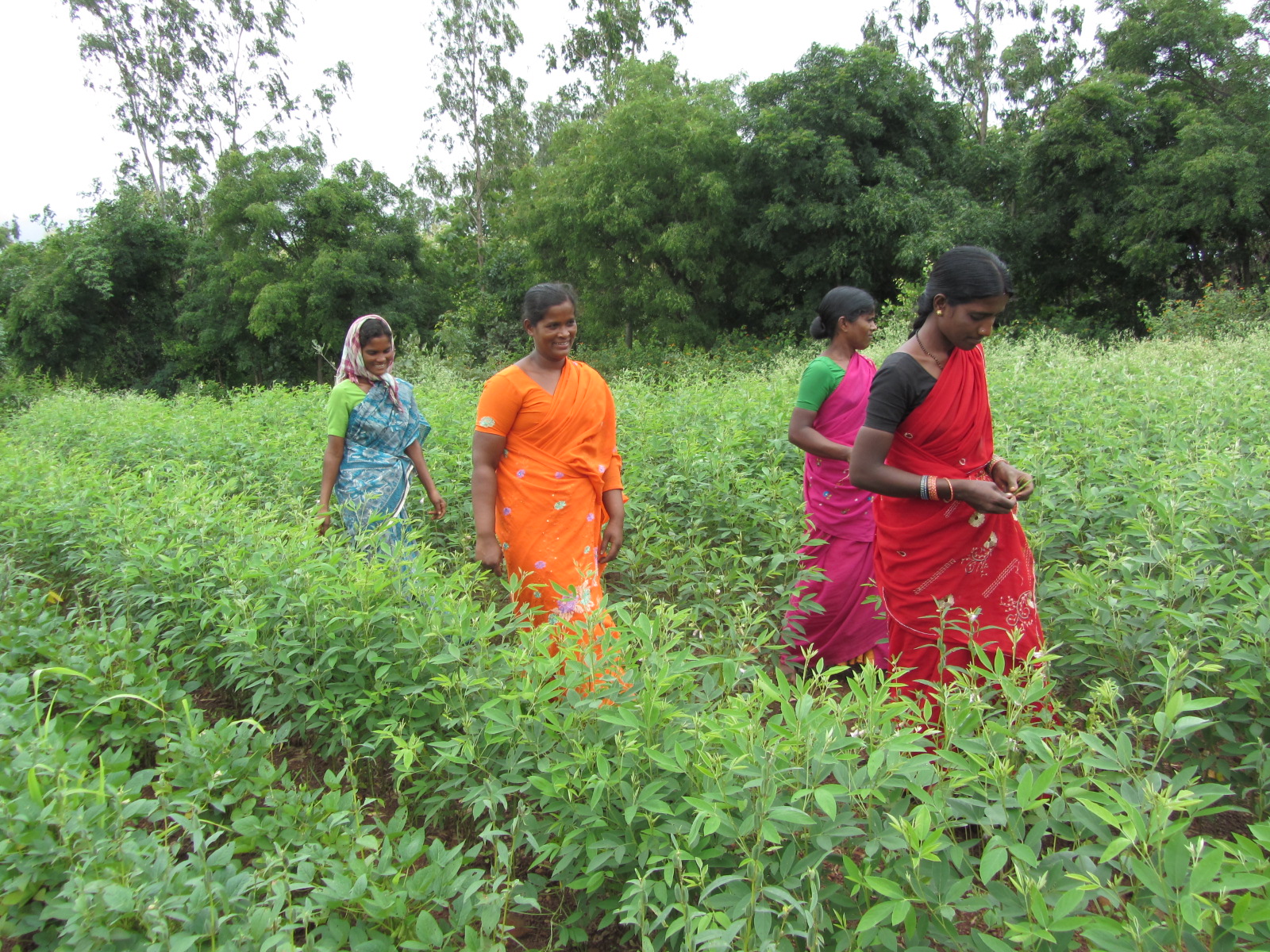 “For nearly five years, all I could afford was rice and a thin red gram [pigeon pea] soup because I didn’t have the money to buy fresh vegetables, which have become very costly,” she says.

Begary is a Dalit, also known as the “untouchable” caste in the social hierarchy, who lives in Malchalma, a village in southern India. Without land of her own, Begary previously earned less than 655 rupees ($12) a month as a farm laborer.

But earlier this year, Begary joined a collective farm along with four other Dalit women in her community. Life has changed considerably since they joined this government initiative, she says.

Today, Begary and her fellow farmers grow 22 crops on the 3-acre farm, including corn, okra, gourd and an array of beans.

“Today, I cooked rice, pappu [lentil] and string bean curry,” she says. “I plucked the beans right from my own farm.”

The government has invited thousands of Dalit women to take up collective farming to empower themselves economically. The women say the program also elevates their social status within their communities. Caste-baste discrimination is illegal in India but continues against Dalits. The program’s success in changing this in one state is prompting plans to expand it nationwide.

In India, 70 percent of Dalit people are landless, according to ActionAid, an international development organization that works to eliminate poverty.

The percentage is even higher in Andhra Pradesh state, where 86 percent of Dalit people do not own any land, says Mary Madiga, founder and president of Telengana Mahila Samakhya, an all-Dalit women’s organization in Hyderabad, the state capital, that fights for Dalit women’s political and social rights.

“Dalits are considered inferior to people born in higher castes,” she says. “So, they do not want the Dalits to have equal rights because it would put them in equal position in the society.”

Rayudu says the total number of women turning to collective farming exceeds 1 million. The majority of them are from marginalized communities in Andhra Pradesh, currently the only state where the initiative is offered.

He says the program started in 2004 to help eliminate poverty. But it has also succeeded in providing better nutrition to women while helping them to find dignity and economic independence.

“We especially targeted Dalit and tribal families because most of them live below the poverty line,” Rayudu says. “So, we started to set up all-women’s self-help groups in villages. In each village, the SHG identifies the poorest of the families and selects the women members for collective farming.”

The government buys 3 to 5 acres of land for each collective farm and hands control of it to a group of five to 10 women, Rayudu says. The women are free to use the produce they grow to sell or to consume. Once they generate enough income, they pay the government back for the land.

The program also provides the women with training in organic and multicrop farming. The government and local self-help groups offer microloans to the women to buy materials such as seeds.

“The idea is to help them overcome poverty, grow their own food at a low cost and get better nutrition,” Rayudu says.

For Dalit women like Begary, the biggest benefit of the program has been a dramatic change in social and economic status.

At the personal level, they have shifted from being homemakers and dependent on their husbands to being the main providers for their families, she says. In the community, they are no longer seen as poor untouchables who work on others’ farms, but as farmers with their own land.

“Though earlier we did everything that we do now – tilling, seeding, weeding and cropping – we were invisible earlier,” says Anjamma, 36, a Dalit farmer who does not use a surname. “We begged for work. We also got less than the standard wages. But now, we are noticed.”

Susheela Yadaiah of Kambalapalli, a village in southern India, is a Dalit woman who runs an organic pesticide shop.

The Community Managed Sustainable Agriculture program trained Yadaiah to make the pesticide, which collective farmers buy from her.

She says that owning a business has improved her economic standing as well as has brought her more respect in her community.

“Do you notice how our house is at the back of the village?” she asks. “That is because the best spots in villages are always taken by the people of the higher castes.”

But since she started selling the pesticide, Yadaiah says government officials and people of higher castes have visited her home.

“We are no longer ignored,” she says. “I even have bought a color TV, which you could only see in higher-caste people’s homes.”

“My parents were landless farm laborers,” she says. “As a child, I worked with them all day long, weeding, plucking and washing vegetables for selling in the market.”

“Education was only for the rich and the higher-caste people,” she says. “As poor Dalits, we had neither any money nor the time to think of schools.”

But since joining the collective, her monthly earning has increased to nearly 5,500 rupees ($100). This helps her to pay for the education of her son, who has just become the first boy in their community to go to college. Ramesh is studying to be an agricultural scientist.

“This is like a dream come true,” she says.

These women’s stories defy the norm of discrimination against Dalits.

“Legally, it is a crime to treat the Dalits as unequal or deny them their rights,” Madiga says. “But in practice, it continues.”

India has a constitutional ban on caste-based discrimination and harassment. But data collected by the National Crime Records Bureau, a government institution, shows that every state in India continues to report crimes committed against Dalits by those belonging to higher castes.

In Andhra Pradesh, 11 percent of police cases were registered as crimes committed against Dalits. These include beating, rape, molestation and murder.

Madiga says that when Dalits protest this treatment, those in the upper castes physically torture or harass them until they fall silent.

“When a woman has no land and no money and is dependent on others for a livelihood, she can’t question or argue any of the rules,” Madiga says. “So, she accepts everything – denial of work or full wages – as her fate.”

Madiga says that economic independence gives the Dalit women a voice and the courage to stand up against what is wrong. This leads to greater liberty and dignity.

Rayudu says that the program has spread to more than 8,000 villages across the state of Andhra Pradesh. The U.N. Food and Agriculture Organization has also expressed interest in introducing it in other parts of India.

The government has also begun to package and market the produce grown by the women of the collective farms under the brand name “Krushi,” which means “farming” in Hindi, Rayudu says.

The growth of the program means continued positive changes for the women involved.

For the first time this year, Begary was able to prepare for Diwali, the Hindu festival of lights that celebrates the victory of good over evil.

“Earlier, I had to go find work even on the day of a festival,” she says.

But this year, Begary celebrated the festival in November at home with her children. She was also able to buy them new clothes and sweets for the special occasion, she says with a broad smile.