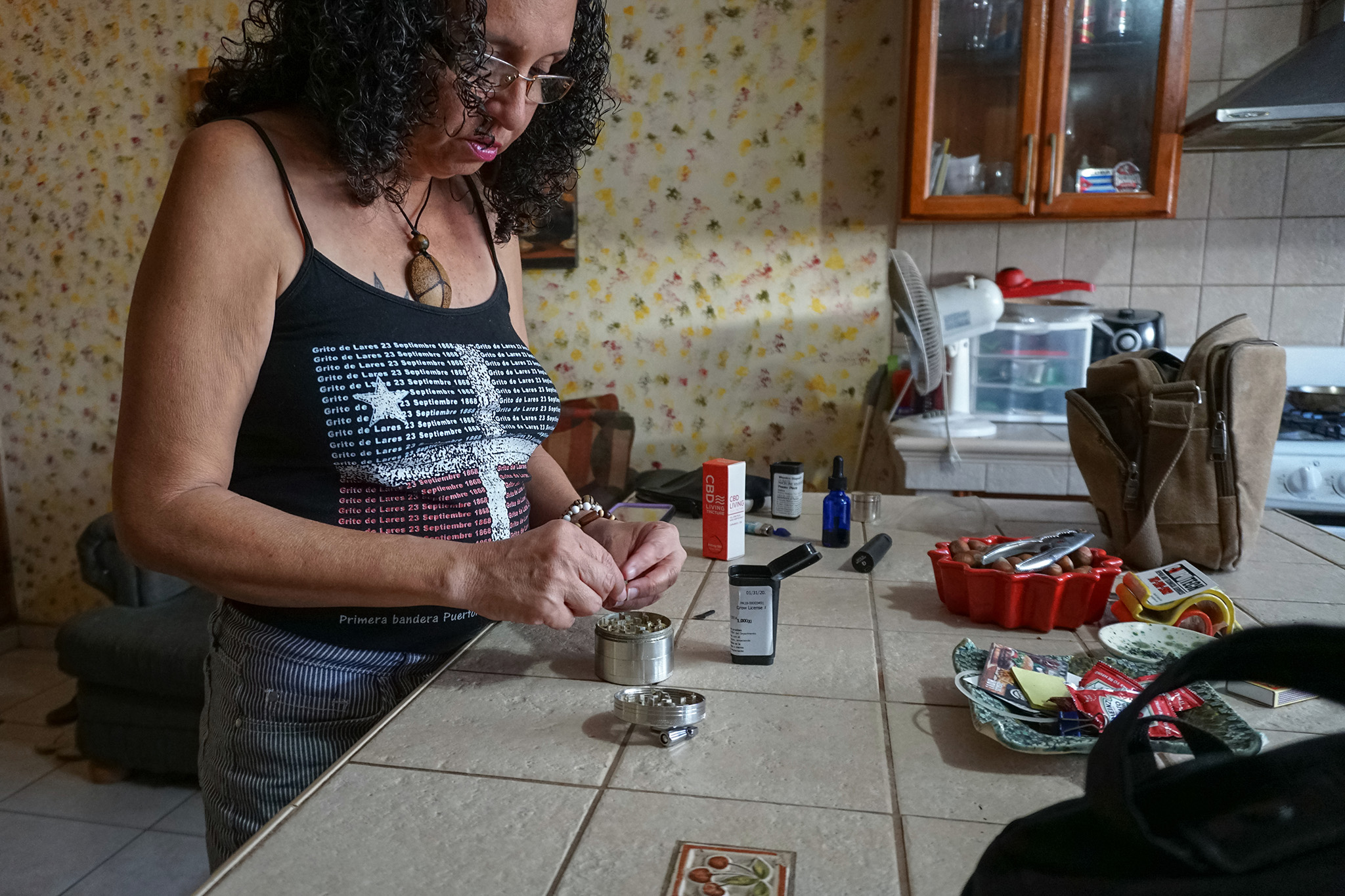 The disease, which affects the central nervous system, wracked her with pain and fatigue. Then came shortness of breath, urinary tract infections, neuropathy and loss of mobility in one leg.

“I was dragging it,” she says. “I couldn’t lift it to put my clothes on, or to climb stairs, or to put on shoes.”

The ceramics maker from Mayagüez, on Puerto Rico’s western edge, researched treatment options but feared the side effects of some pharmaceutical drugs. So she turned to a less conventional therapy: cannabis.

For years she used it illegally to treat her condition. But in 2017, Puerto Rico set up regulations for medical cannabis, two years after the region’s then-governor made it legal.

Patients like Rivera rejoiced, but their celebration was short-lived. They still face an array of obstacles, as a law meant to offer relief has collided with traditional mores of Puerto Rican society.

Employers can fire medical cannabis users. Doctors often refuse to discuss marijuana as a treatment option. And patients must pay a tax when they buy the drug.

“Users are still stigmatized,” says Rivera, 54, a founding member of Pro Cannabis Patients Alliance, Inc., which advocates for accessible medical cannabis. “We still have to hide to take our medication.”

As of July 2019, about 92,500 patients had registered with the Department of Health as medical cannabis users in Puerto Rico, mostly for anxiety disorders and chronic pain. They can buy the drug at 135 dispensaries, in the form of flowers, creams, oral drops, vapor, patches, pills and more.

Using marijuana for any other purpose remains illegal.

The law has made it easier in some respects. Medical cannabis users pay a $25 certification fee for a license, which allows them to buy up to 1 ounce of cannabis per day.

“Patients have peace of mind now,” says Juan Capella, a lawyer who has advocated for the legalization of cannabis since he was in high school. “They no longer have to worry about running afoul of the law and can purchase it from more credible sources.”

Capella and others, however, suggest that the law has had limited impact, as Puerto Rico has not fully reckoned with its implications.

Many physicians decline to be licensed to recommend cannabis, for example, and won’t suggest it as a possible treatment.

Patients can buy medical cannabis only after a doctor recommends it. Ideally, physicians should do an in-person exam, but many engage patients online or by phone instead. As a result, Capella says, doctors often don’t know much about a patient’s condition before making their recommendation. The law does not let doctors write prescriptions for medical marijuana, which means it is considered taxable personal property. Patients who buy the drug pay an 11.5% tax that applies to no other medications.

Capella says the whole process – which can run to more than $100 after the recommendation, certification and purchase – makes cannabis too expensive for many patients.

A number of rules dictate how physicians handle issues around medical marijuana, and government officials say rogue doctors risk going before the Medical Disciplinary Licensing Board.

“One of the challenges has been that the industry has grown so quickly that it has been a bit difficult to conduct oversight measures,” says Denise Maldonado, executive director of the Medicinal Cannabis Regulatory Board. “But we are organized for regular inspection cycles.”

Companies must do rigorous lab testing, which may increase the cost, she says, but this protects patients. She notes the government lets the market set prices for medical cannabis.

The United States Food and Drug Administration does not regulate medical marijuana, Maldonado says, which is why physicians can only recommend – not prescribe – the drug.

Medical cannabis laws are evolving. Municipalities in Puerto Rico generally do not protect employees who use the drug, but a law pending in the legislature would keep employers from firing workers who are certified to take cannabis.

Funny and animated, Rivera symbolizes the struggles and triumphs of many patients.

She recalls that she had to learn how to use cannabis and eventually taught herself “microdosing” – using small amounts of marijuana daily – because doctors gave her little guidance. Today’s patients, she says, are no better off.

“When I first started, no one was able to help me,” she says. “No one was able to talk to me about microdosing, the right way to do it. If you take a lot of cannabis, you’ll need more because your body starts to tolerate it. This is not the same as recreational use.”

Rivera says that since a general practitioner certified her use of medical cannabis, she has seen five neurologists over the years. None have been certified to recommend cannabis, and some treat the topic as taboo.

Rivera says her health has improved. She takes a magnetic resonance imaging exam annually, and although telltale brain lesions from the disease are still present, they are inactive. This means her symptoms surface less frequently.

She would like to grow her own marijuana, but home cultivation remains illegal in Puerto Rico.

Rivera pays more than $300 a month for the drug, as insurance doesn’t cover it. She hopes to lower the cost by making edibles and oils from the cannabis flower.

“It’s the most organic and complete way your body receives [the cannabis],” she says, about the flower.

“Besides, it’s the cheapest thing in a dispensary.”

This article, originally published on July 26, 2020, was updated to reflect new dispensaries.