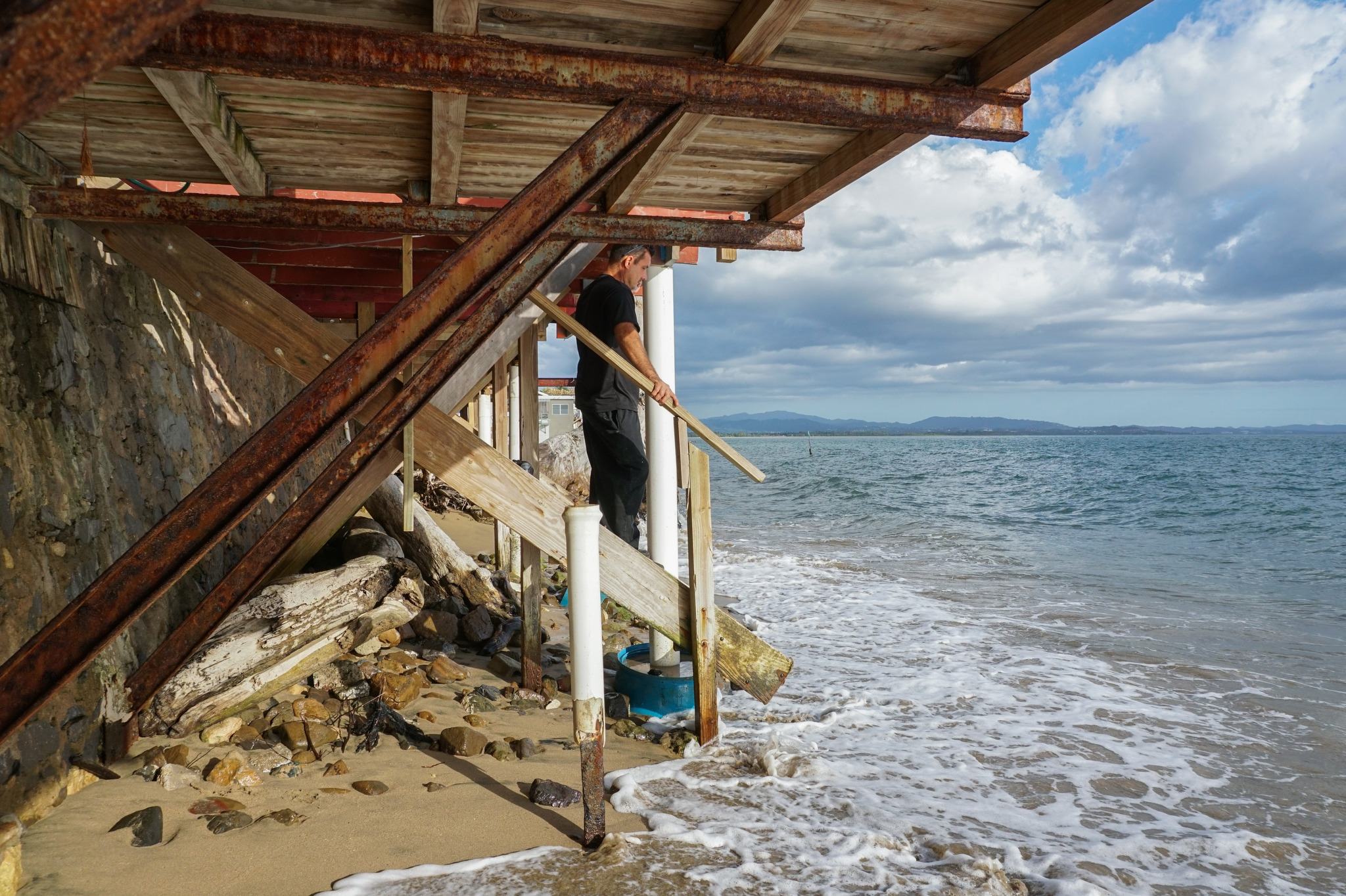 AÑASCO, PUERTO RICO — Just below Suhail Vélez’s balcony, the sea breaks on the shore in small, foamy bursts. As night falls in Caguabo, a neighborhood in the western Puerto Rico municipality of Añasco, the surf tempers down.

It’s a breathtaking sight. But three years ago, ocean waves tore down half of Vélez’s house.

Ivelisse Ríos’ story is similar. The beach eroded until her house collapsed.

“People would tell me that I lived in a paradise because the sea was so beautiful,” says Ríos, who for more than 40 years has lived in the Espinar neighborhood of Aguada, another western municipality.

Frequent storms have clawed away at the region’s natural coastal barriers, leaving residents like Vélez and Ríos vulnerable to flooding and other hazards. Despite the devastation of Hurricane Maria in 2017, the strongest to hit Puerto Rico since 1928, officials have not implemented a mitigation plan that would protect residents from  increasingly powerful storms.

Puerto Rico tops the list of areas most affected by climate change in the last 20 years, according to the 2021 Global Climate Risk Index by Germanwatch, a development and environmental nonprofit based in Germany, and scientists anticipate an increase in the frequency and intensity of the region’s storms. With hurricane season about to begin, residents and experts are calling on the government to establish an urgent mitigation plan to help save both lives and infrastructure. 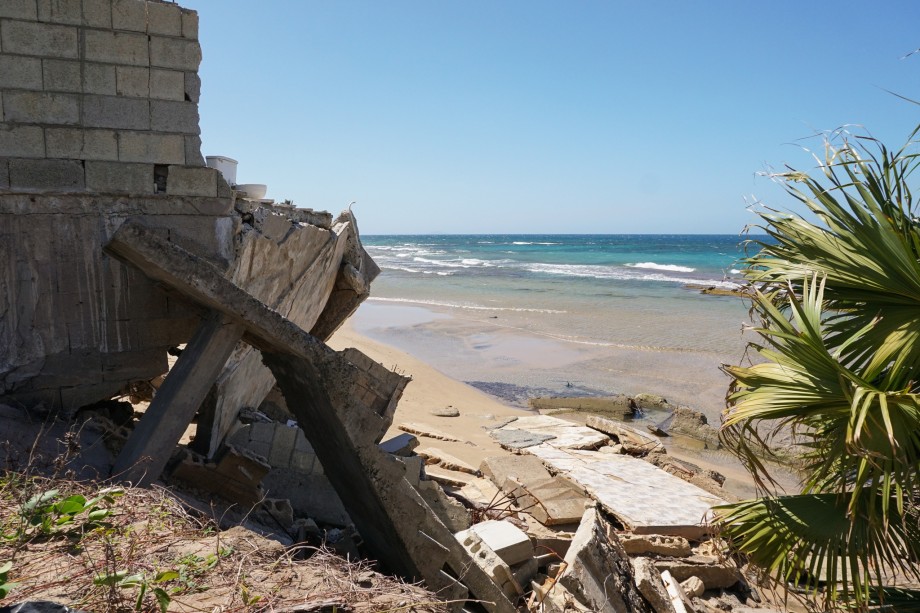 Debris remains from the collapse of Ivelisse Ríos’ home.

The government established the Comité de Expertos y Asesores sobre Cambio Climático (Committee of Climate Change Experts and Advisers) in 2019 to work on a mitigation plan. But a lack of funds delayed the project, says Edgardo Feliciano, chairman of the Comisión Conjunta sobre Mitigación, Adaptación y Resiliencia al Cambio Climático (Joint Commission on Climate Change Mitigation, Adaptation and Resilience), the legislative body under which the committee operates. His adviser, Obed Rojas, confirms that in March, a budget of $200,000 was approved for use through June. Officials likely will approve $1.8 million for the new fiscal year that starts in July, Rojas says.

As coastal communities wait for the commission to come up with a plan, they’re at risk of losing everything again.

Some, like Vélez, have had to find ways to protect themselves and their property. Her husband is rebuilding their house with help from builders in the community. They’ve reinforced the foundation with 15 feet of concrete, although that’s no guarantee it will withstand the harsh weather.

“It can handle the water a bit,” Vélez says.

Permitting construction along these vulnerable areas has only put them at more risk, says Federico Del Monte, president of the Sociedad Puertorriqueña de Planificación (Puerto Rican Planning Society). He says the immediate answer is to stop all construction along the coastline and relocate homes from flood zones. Maritza Barreto, a geologist and professor at the University of Puerto Rico’s Río Piedras campus, agrees that the government must take action to ban construction permits. 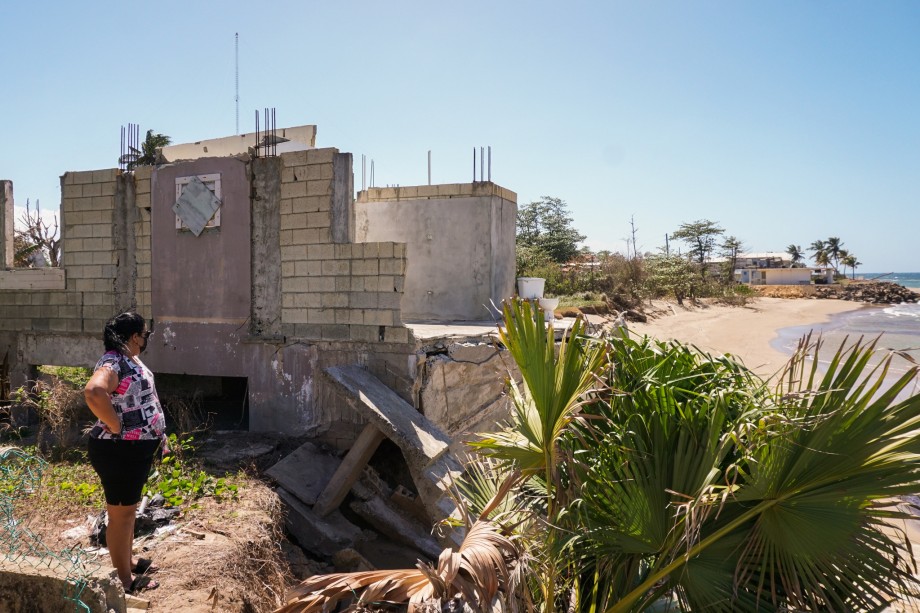 Ivelisse Ríos stands next to the collapsed walls of what was once her home. She had started to rebuild before the sea destroyed it again.

A public hearing to consider a moratorium on construction in vulnerable areas has been scheduled for June 3.

Ríos, whose home was destroyed, says erecting a stone barrier between the sea and residential areas will help stop the waves. For the last three years, she has been asking the municipal government to install one. So far, nothing has been done, she says.

Barreto sees a problem in Ríos’ solution. The barrier might provide temporary reprieve, she says, but in the long term, it will only aggravate the situation.

“If you put rock in front of your residence, you stop the movement of the coastline and your area will be momentarily protected for several years, maybe five to 10 years,” Barreto says. “But you will immediately cause erosion to your neighbor.”

This has been the case in Espinar, says Wesley Vega, director of planning for the municipal government of Aguada. When the municipal government installed a promenade on the coast of neighboring Aguadilla, it reduced erosion in Aguadilla. But in Espinar, the situation worsened. The waves breaking on the promenade pushed the water toward Espinar, resulting in the current erosion. 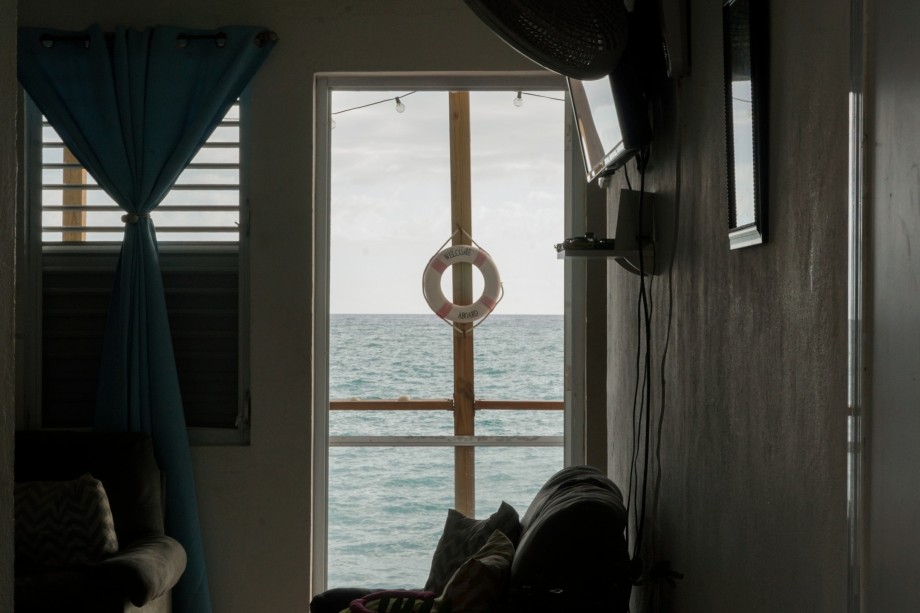 Suhail Vélez’s house is still under construction three years after a storm surge destroyed half of it.

The municipal government of Aguada is in meetings with specialists from the Mayagüez campus of the University of Puerto Rico to address the situation, which worsened in 2018 after Hurricane Maria, Vega says.

Meanwhile, Ríos will soon move to a new house after securing funding from the federal government. However, many of her relatives, including her mother, have houses in the area where hers used to be. She worries theirs face the same fate.

Vélez’s house is yet to be completed. She still relishes the orange hues of the ocean sunsets, but fears what the sea might bring.

“There are times when it’s a little scary,” she says.