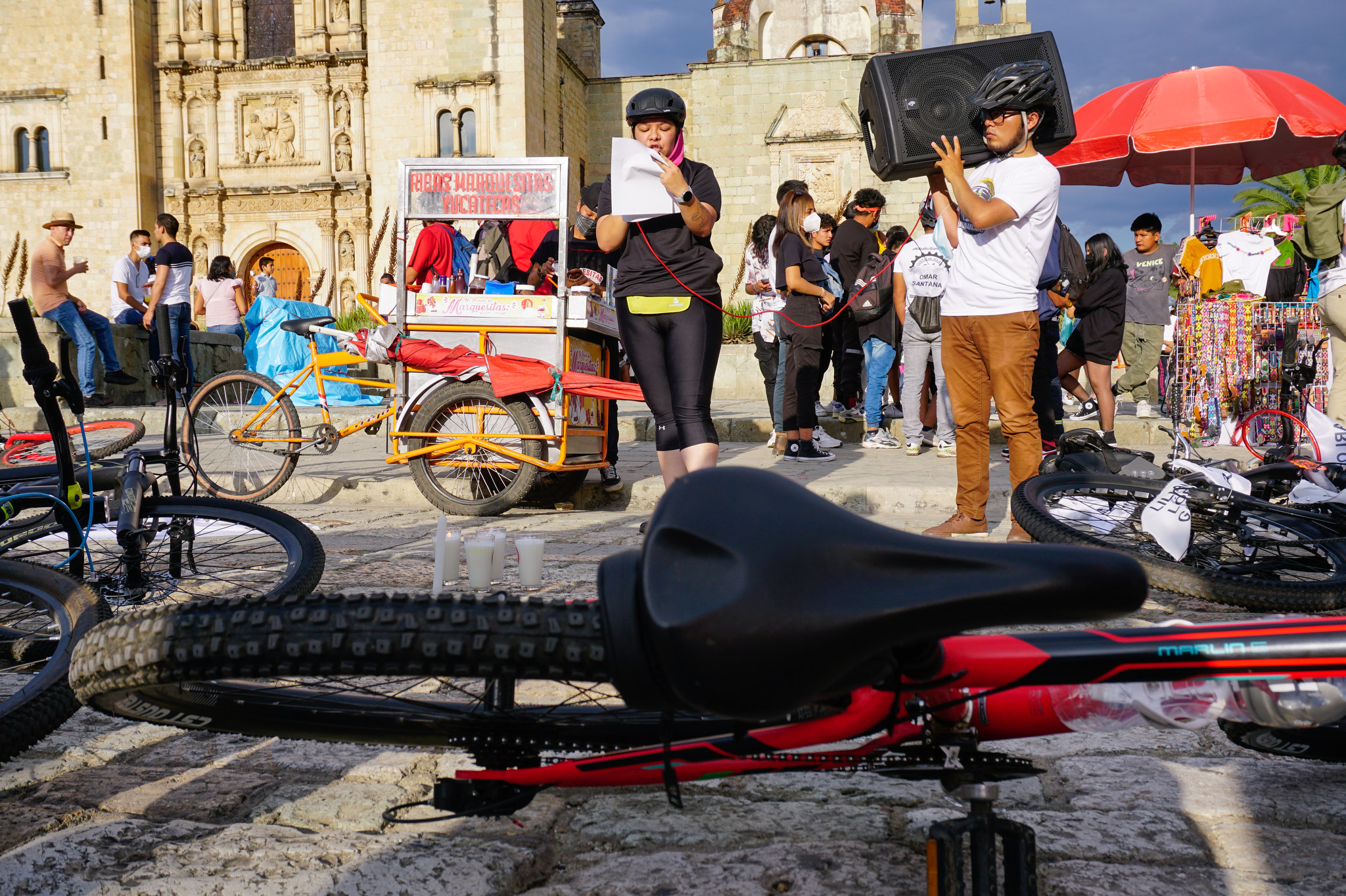 OAXACA DE JUÁREZ, MEXICO — Gabriela Soto left her house at 7 a.m. on Dec. 18, 2020. She rode her bicycle to the elementary school she’d founded. Shortly after, she told her mother she was coming home to have breakfast. Her family waited for hours. They didn’t know it then, but Soto’s bicycle had been hit by a bus.

The Safe Mobility Coalition, which comprises over 61 civil society organizations, calculates 44 people are killed every day in road accidents in Mexico. In 2017, Mexico ranked seventh globally and third in Latin America in deaths from road accidents. But even with a hard-fought amendment to the constitution in 2020 and the subsequent passage of a road safety law, activists denounce the persistent hazards of Mexico’s streets.

“To leave the house as a pedestrian is to know that you are going to have to cross many avenues with traffic lights that are not programmed for pedestrian crossing,” says Areli Carreón, a coordinator for the Safe Mobility Coalition.

Streets that optimize the flow of vehicular traffic makes them dangerous for pedestrians and cyclists, she says. Drivers often don’t obey traffic signals, and pedestrians attempting to cross streets are left waiting a long time. Even then, they must weave through cars and dodge insults from drivers. 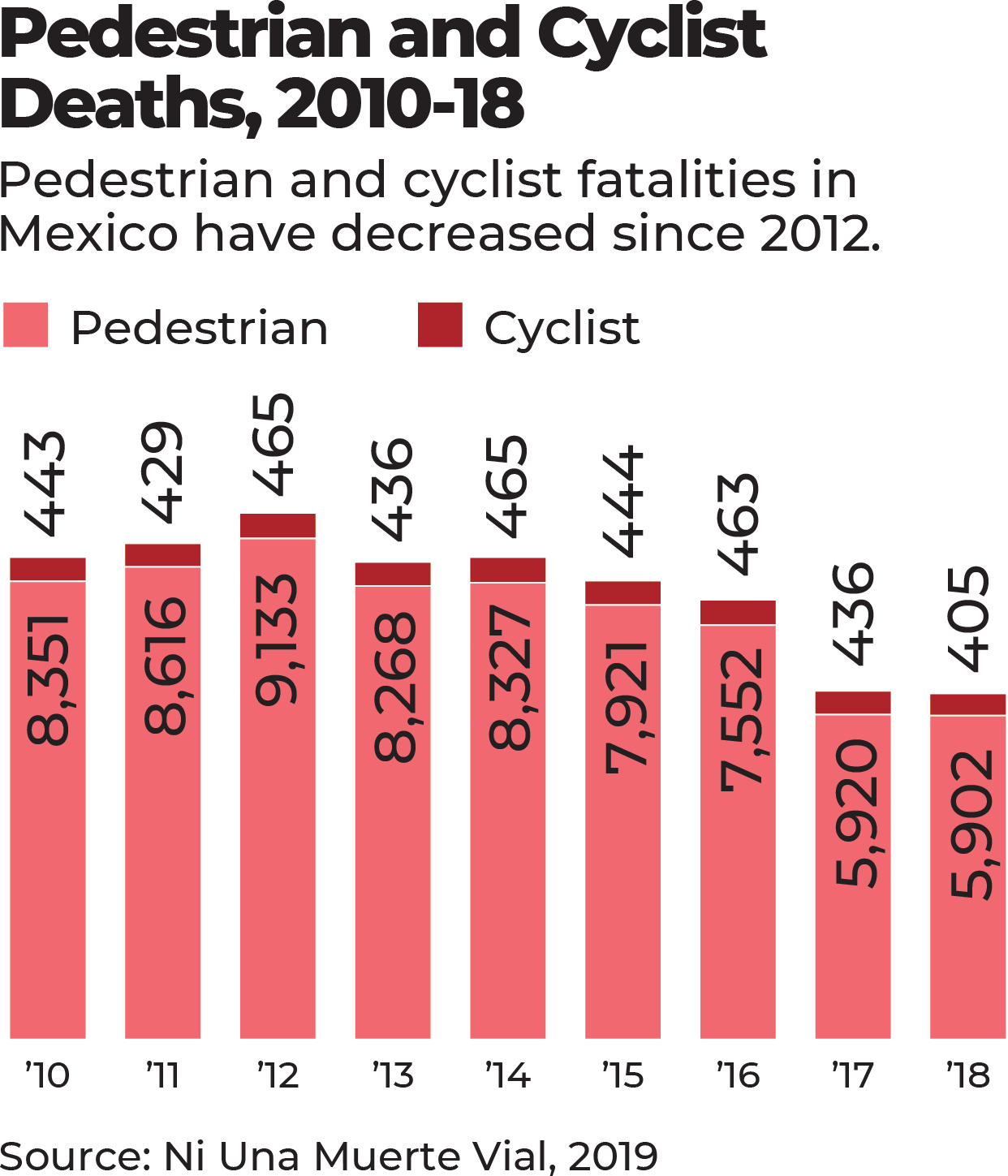 Bicycle lanes typically exist only in the central districts of major cities. “When it comes to bikes,” says Alma Chávez, president of Víctimas de Violencia Vial (Victims of Road Violence), a civic organization in the western state of Jalisco, “lanes and signs are almost nonexistent.”

Urban passenger buses in particular contribute to a risky environment. Besides traversing streets designed to accelerate traffic, they are sometimes driven by people who have fake licenses and race each other, Carreón says. Fake licenses, she says, may cost as little as 50 Mexican pesos (about $2.50).

When Esther Soto received news of her sister Gabriela’s death, she went straight to the bus operator’s office. She wanted answers. “I want to know who can tell me where to find the driver, because he has run away,” she told them. “I’d like to know who he is so that I can press charges.”

Soto says that as she spoke, three drivers blocked her path, accusing her of defaming the business. “The three men were quite violent verbally,” she says. So she left.

Representatives of the company, Zaachila Yoo, didn’t respond to requests for comment. 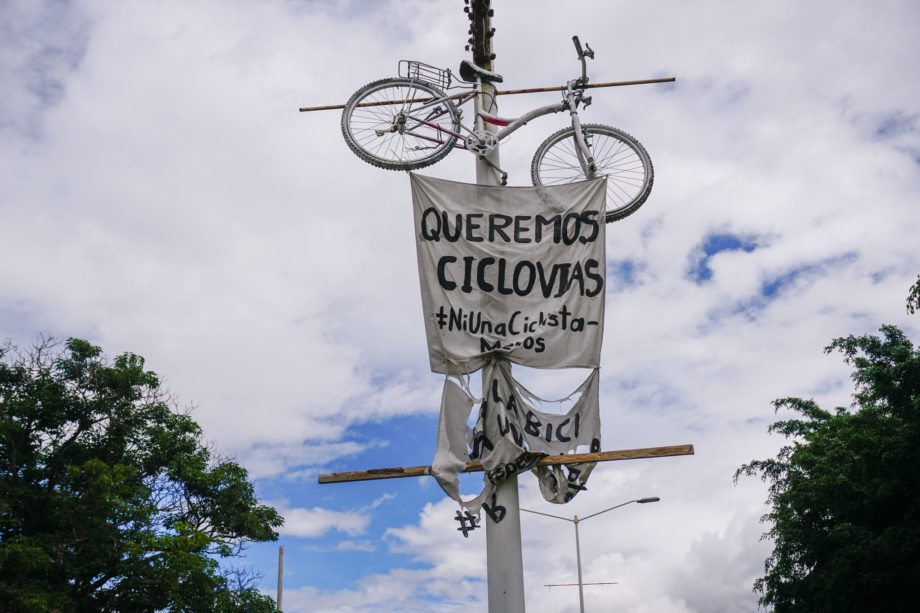 Sixty-five percent of drivers responsible for fatal accidents involving pedestrians and cyclists flee the scene, according to a 2019 report by Ni Una Muerte Vial (No More Road Deaths), an organization that analyzes pedestrian and cyclist fatalities in Mexico. Only 5% of those who flee are later caught and detained. All in all, 6 out of 10 cases never find justice, the report says.

Soto says she heard from the bus company two months later. “I met with them at a coffee shop, where the lawyer for the bus line’s insurance company told me this would be resolved quickly and simply,” she recalls. The family was offered money and an apology in exchange for not pressing charges.

Soto’s experience wasn’t an anomaly. Jeanne Picard, president of the Ibero-American Federation of Victims Against Road Violence, says it’s usually the lawyers or the insurance representatives of transport companies that show up to talk to families — often at a time when they are disoriented and need psychological and legal assistance. 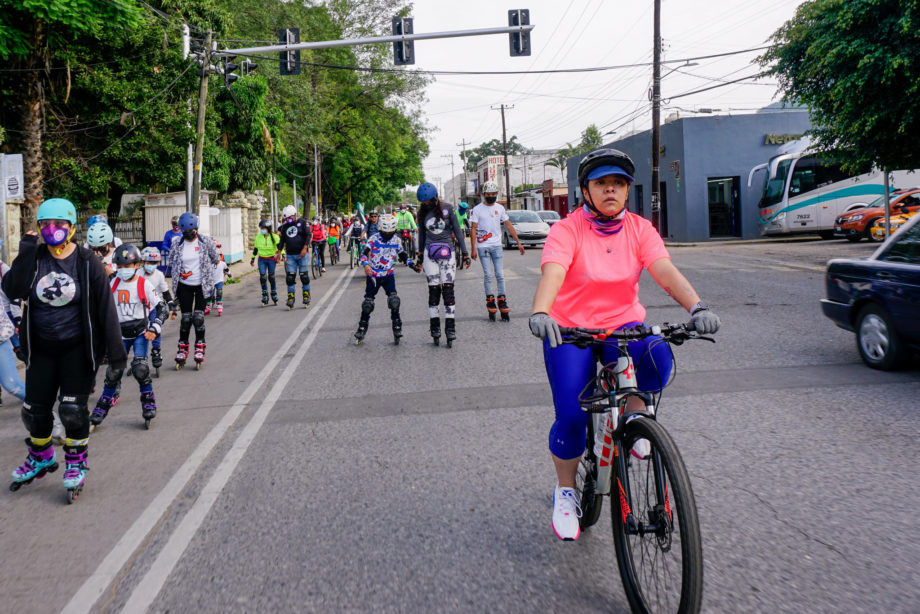 Friends and families of people who have died in road accidents congregate for a bike and in-line skating rally through Oaxaca de Juárez in June last year to raise awareness for a road safety law.

Soto told the lawyer she wasn’t interested in a payoff. The lawyer chided her for being cold and heartless toward the driver, who was described as a father who went out every day to earn a living.

“There’s no amount of money that you could offer me,” Soto responded. “And you’re asking me to not proceed legally, to accept the apology — doing that would be to contribute to impunity.”

Months after the accident, the driver who hit Gabriela Soto was apprehended. He awaits a preliminary hearing.

The protracted legal process can deter families from pressing charges. “Everyone told me I would get tired,” Soto says. But she pressed on, determined to set an example. 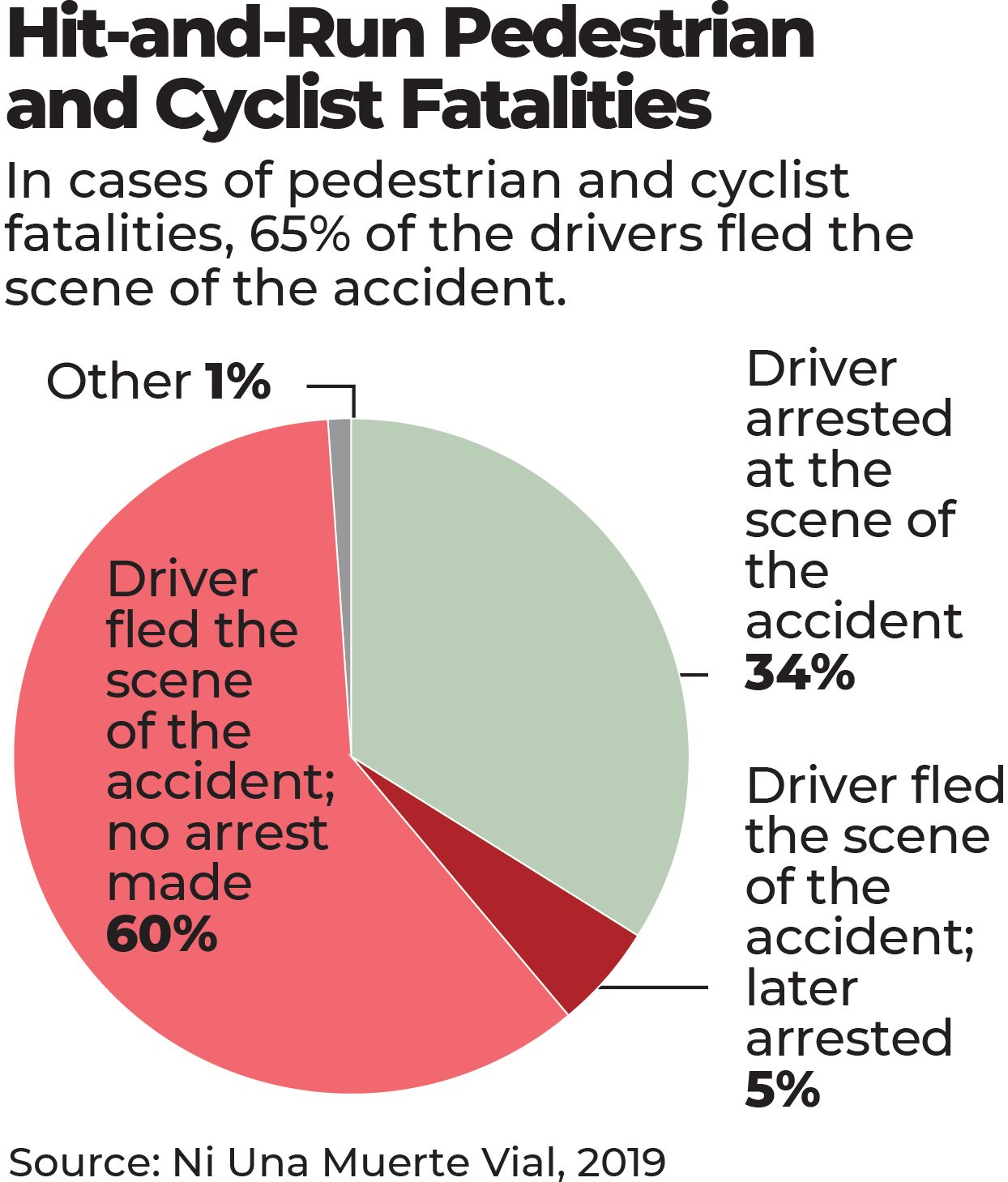 In 2020, following years of civic advocacy, Mexico approved an amendment to its constitution to explicitly include the right to safe mobility. As a result, Mexican legislators were obligated to approve a corresponding law, which empowers federal, state and municipal governments to create conditions for safe mobility, Carreón says. The broad jurisdiction is crucial because issues like traffic regulation, sidewalks and corresponding budgets are decided at the municipal level.

The Mexican Senate approved such a law last December and set the stage for state governments to follow suit.

“I believe the country should have made this progress a long time ago,” says Roxana Montealegre, director of mobility at the Ministry of Agrarian, Territorial and Urban Development, one of two federal agencies that oversees the national road mobility strategy. For most Mexicans, traveling by road is neither safe nor pleasant, Montealegre says. “The law will certainly help us.” 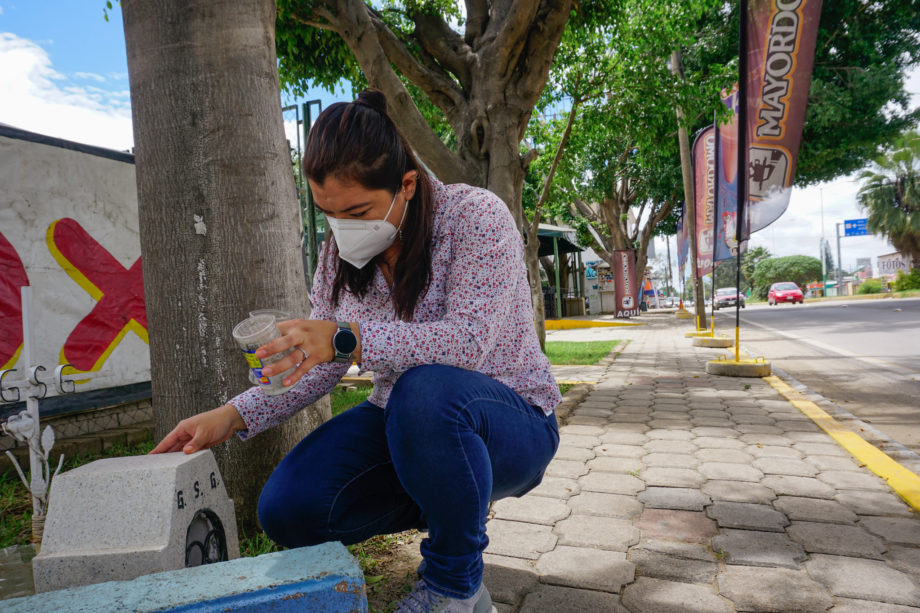 Near where her sister was killed, Esther Soto crouches on the sidewalk to replace candleholders in a memorial alcove.

But the fight for safer roads in Mexico doesn’t end here, says Senator Emilio Álvarez Icaza. “I want to be clear: Having a general law does not mean the issue will be resolved. The law is a base, and we’re going to have to keep insisting on its compliance over the next decade.”

Relatives of those who have died in road accidents understand this all too well. Since last March, Soto, still reeling from her sister’s untimely death, has been organizing bike and in-line skating rallies through the city of Oaxaca de Juárez to demand safe streets for everyone. With each rally, more people join the cause.

Ena Aguilar Peláez is a Global Press Journal reporter based in the state of Oaxaca, Mexico.