Skip to main content
The story you are reading was published on Tuesday May 24, 2016. To read more recent stories click here. 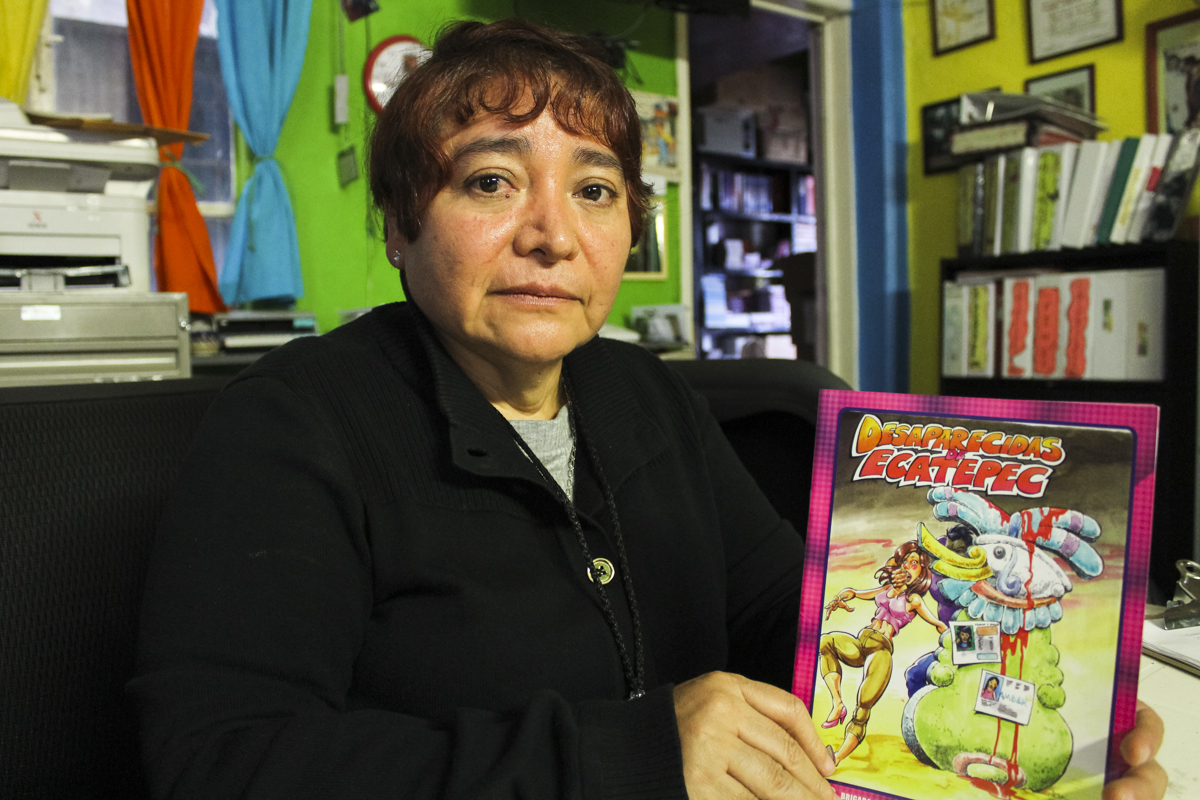 MEXICO CITY, MEXICO — Some 50 sex workers fill up the office of Brigada Callejera de Apoyo a la Mujer “Elisa Martínez,” an activist group that promotes the rights of sex workers, including transgender people, and also battles trafficking and focuses on HIV and AIDS prevention. It is March 8, and the sex workers are gathered for a celebration for International Women’s Day.

Before the celebration, the president of the organization, Elvira Madrid Romero, chats with the group. Despite her short stature and serene voice, Madrid Romero, 49, asserts herself, and the women listen to her attentively.

The organization, commonly called Brigada Callejera, is in La Merced, a Mexico City neighborhood considered to be one of the main centers for sex work in the country’s capital.

Madrid Romero was born in Mexico City, and she’s always lived here. She first connected with sex workers in 1989, when she was a sociology student at the Universidad Nacional Autónoma de México, the national university in Mexico City, and was chosen by her teacher to assist in research on the sociology of prostitution.

While she was doing that research, Madrid Romero says, she observed that no one helped the sex workers when they got sick, or even when they were at the point of dying. That affected her and convinced her to dedicate her life to this work.

Brigada Callejera was officially formed in 1995 by four former sociology students. They added “Elisa Martínez” to the organization name in memory of a sex worker whom they’d met during their work as students, and who had died of AIDS. 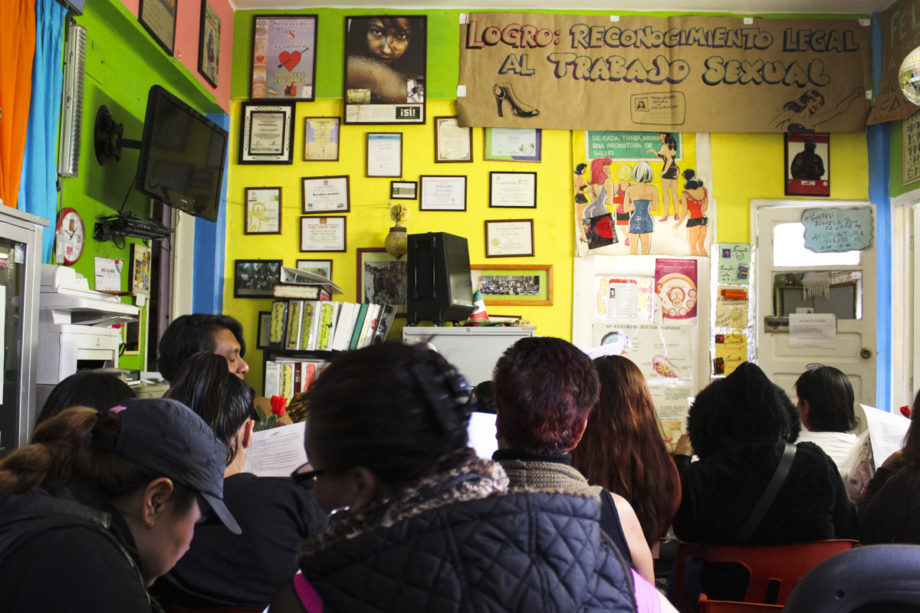 Sex workers await a meal and gifts in Brigada Callejera’s office lobby, during an International Women’s Day celebration. The office is in the La Merced neighborhood, considered one of the main areas for sex work in Mexico City.

Montejo, now the organization’s press coordinator, says group members chose Elvira Madrid Romero as president because they considered her the most fearless and the most empathetic to the sex workers.

Now, nearly three decades after she first began supporting sex workers, Madrid Romero has developed a toolbox of strategies that she says are effective in combating the discrimination and violence they regularly face.

The Brigada Callejera office includes a health clinic, where sex workers have access to pregnancy tests, HIV tests and other medical exams. Some of those services are free, and others are offered at a low cost that covers supplies. Condoms and lubricants are sold below cost.

Brigada Callejera also offers other services, including acupuncture and literacy and psychological support.

But the real work is in the streets, she says.

“On the street is the struggle, that’s why we call ourselves Brigada Callejera,” she says. “This is a space where [the sex workers] know that if they need to talk with anyone, go to the doctor, to the dentist, literacy, well here it is. But our work is on the street.”

Gloria Muñoz Ramírez, a journalist and member of Brigada Callejera’s board, says Madrid Romero’s primary contribution has been to give dignity to sex workers instead of trying to convince them to leave the sex trade.

I knew the Mexico of before. There were many raids, it was of paying the police. Imagine, like 15 years fighting with all of that [just] for Brigada Callejera to come after. It was a lot of help, a lot of support, a lot of teaching, a lot that we learned from Brigada Callejera, that truthfully, so far we continue learning more each time.Chabelita, a 57-year-old sex worker who asked to be identified by her alias

Brigada Callejera uses innovative methods to get sex workers the services and information they need. The group distributes comic books that describe the rights of sex workers and the risks of their trade. A network of sex workers, maintained by Brigada Callejera, helps others find the health care they need and even offers accompaniment to doctors’ appointments.

“Many of the sex workers have been trampled on, many are very alone women, very vulnerable, who have suffered an excess of violence,” Muñoz Ramírez says. “For a sex worker, it’s really important to rely on someone, and they count on Elvira.”

In 2014, a court judge found this precept to be unconstitutional, noting that it is contrary to the right to work.

But that finding isn’t widely applied, says Claudia Torres Patiño, who between 2011 and 2015 researched sex work and human trafficking from the legal perspective at the Centro de Investigación y Docencia Económicas, a public research center in social sciences.

She is currently researching the effects of this court finding, she said in a Skype audio interview from the United States, where she is pursuing a master’s degree at Harvard Law School.

The total number of sex workers in Mexico City is unclear.

The 2014 resolution has generated data on the issue since the local Secretaría de Trabajo y Fomento al Empleo, Mexico City’s labor and employment promotion ministry, was ordered to give credentials to sex workers that recognize them as self-employed.

Between the start of 2014 and last January, the ministry provided 170 credentials, Torres Patiño says, referring to data she requested from the government.

For Madrid Romero, aiding sex workers means more than just speaking with them on the street. It means tracking down workers who have been arrested, or visiting them in the hospital. It means helping them at health clinics, coming to the aid of their children or even organizing funerals when someone dies.

That’s how she learned about sexually transmitted infections and contraception, she says. She also learned about the services offered by Brigada Callejera. She says she’s received medicine, contraceptives and advice.

“I didn’t used to know, but, since I began to come here, I learned everything,” she says.

Sex workers have long faced abuse. In 1994, the Comisión de Derechos Humanos del Distrito Federal, the human rights commission for Mexico City, stated that abuse, extortion and illegal detention of sex workers and their clients by police, civic judges and public servants were common in La Merced and other areas.

Chabelita, a 57-year-old sex worker who uses this single name, has been in the sex trade for more than 40 years, she says. The era referenced in that 1994 report brought suffering, she says.

“I knew the Mexico of before. There were many raids, it was of paying the police,” says Chabelita. “Imagine, like 15 years fighting with all of that [just] for Brigada Callejera to come after. It was a lot of help, a lot of support, a lot of teaching, a lot that we learned from Brigada Callejera, that truthfully, so far we continue learning more each time.”

Sex workers often read those sorts of comic strips, Madrid Romero says, so the book is an effective way to communicate a message to sex workers, including those who are illiterate or who are being watched by pimps.

One of the comics is an adaptation of an academic text by Torres Patiño about the law against human trafficking.

“I realized that it was a very good way to get information to the workers, and I wish there were more initiatives like these because, for example, my job is a job where if you don’t adapt, [the sex workers] don’t read, they don’t get informed,” the law student says. “I don’t think I would have ever been able to get my information to the workers if it hadn’t been for [Brigada Callejera.]”

The comics have been published for about 15 years, Madrid Romero says.

At the end of the International Women’s Day celebration, the sex workers say goodbye to Madrid Romero with hugs. All of them took bags with gifts that Brigada Callejera gave them, including toys for their children and kitchen utensils.