Skip to main content
The story you are reading was published on Thursday January 24, 2013. To read more recent stories click here. 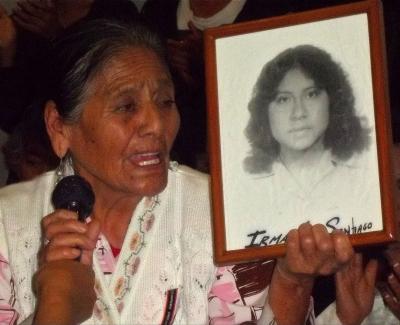 MEXICO CITY, MEXICO — The last time María Concepción Ávila González, 55, and her mother, Matilde González, saw their brother and son, Jesús Ávila González, was on April 5, 1974. He was 23 years old and was studying economics at Instituto Politécnico Nacional, a prominent public university in Mexico.

But he also was a social activist who belonged to the Partido de los Pobres, a guerrilla group, during Mexico’s “Guerra Sucia,” or Dirty War as it is now known. The Dirty War was an internal struggle from the 1960s to the 1980s between the government, led by the Partido Revolucionario Institucional political party, and left-wing student and armed groups.

“From the moment that he disappeared, we looked for him for three years,” says Ávila González, who was 26 at the time.

She says they were unable to get any information from the police.

“They simply ignored us,” she says. Through newspaper articles, she and her mother learned in 1977 about Rosario Ibarra de Piedra, the leader of Comité ¡Eureka!, a group of mothers looking for daughters and sons who had been arrested and disappeared because of their political ideas.

“When I met Doña Rosario Ibarra, she already had my brother on a list of missing persons,” Ávila González says. “Then, we didn’t know what a political prisoner was, nor the political struggle, nor parties nor anything. From that moment, we got involved in the political struggle. In every protest, in every banner, there was a hope for us.”.

Led by a group of mothers, relatives of the disappeared are still looking for hundreds of missing family members. They opened Casa de la Memoria Indómita last year to serve as a memorial museum and cultural center. Relatives say the initiative is keeping their fight alive by offering hope that they will one day reunite with their loved ones.

In 2001, the Mexican government, under the first president who was not from the Partido Revolucionario Institucional in 70 years, opened the first investigation into forced disappearances by the government during the Dirty War. It created the Fiscalía Especial para Movimientos Sociales y Políticos del Pasado, which registered 789 forced disappearance cases from 1968 to 1988.

In 2006 the Office of Special Prosecutor Ignacio Carillo Prieto, released a report that detailed the government’s violent repression of student groups during the Dirty War. The report accuses three past presidents of a sustaining an official practice of violence against guerrilla groups and student protesters. The report accuses former presidents between 1964 and 1988 of “massacres, forced disappearance, systematic torture, and genocide.”

Despite acknowledging the policy and registering the disappearances not one case has been solved.

Meanwhile, relatives of the disappeared continue to look for their missing family members. The group of mothers led by Ibarra de Piedra named their organization Comité ¡Eureka! After the exclamation used to express triumph on a discovery, says Celia Ibarra, one of its members. But they also are known as “doñas,” a respectful title for elderly women in Mexico. Since 1975, the group has searched for hundreds of missing persons who were disappeared during the 1960s and 1970s by police, military or paramilitary groups because of their opposition to the Mexican government.

The doñas’ fight forced the Mexican government to release and drop charges against 1,500 political prisoners in 1978 and to cancel 2,000 warrants for arrest, says Jorge Gálvez, the husband of one of Ibarra de Piedra’s daughters. They also identified 148 people in jail who had been reported as missing, as well as secured the return of 57 political exiles.

But for the doñas, it hasn’t been enough because there are at least 557 people still missing today, according to the organization’s records. Many doñas continue to look for their missing relatives, including the leader of the group, Ibarra de Piedra, now 85. Her son, Jesús Piedra, has been missing since 1974.

Other family members of the disappeared have also joined the doñas’ cause, including fathers, grandparents, wives and siblings.

“If you have a missing person, we are sisters of the same pain,” Piedra Hernández says she had told the leader of Comité ¡Eureka! the first time she met her.

To remind the country that these cases are still unsolved and that an investigation is pending, the doñas opened the museum, Casa de la Memoria Indómita, in June 2012. This is the first memorial museum for the politically disappeared in the country.

Gálvez has been in charge of the museum since it opened. He also guides the scheduled tours at Casa de la Memoria Indómita.

“It’s indomitable because their fight has been unwavering, indomitable,” Gálvez says of the name. “‘They don’t accept help – neither from political parties nor from any government.”

The purpose of the memorial museum is to keep the memory of the political forced disappearances alive in Mexico, Gálvez says.

The Mexico City government donated a colonial residence to Comité ¡Eureka! to house the museum, located downtown in the nation’s capital.

The principal hall of the museum, decorated as the living room of a house, features around 200 portraits of the disappeared on the walls and shelves. Young men, many of them were students, dominate the photographs.

To remember the 557 people who are still missing, the museum has a big candelabra with their names and the date that each of them were disappeared. The portraits of mothers who have died without finding their sons and daughters also hang on the walls.

A mural on the main wall of the museum, created by a group called Lapiztola, captures the essence of the doñas’ struggle: a mother hugging her son, who takes shape from birds flying back home. Gálvez says the boy could represent anyone who was disappeared.

“It doesn’t have to be a son necessarily,” Gálvez says. “But he could also be a husband, a brother, a daughter.”

The doñas also want to convert the memorial museum into a cultural center. The museum stores hundreds of records of missing persons, collected mainly by Ibarra de Piedra. Gálvez estimates there are around 90,000 files, including complaints, newspaper articles, posters and even bus tickets that the doñas collected during their own searches for their missing relatives.

The museum also reconstructs the political struggle and period of repression during the 1960s and 1970s. In one hall, there are photographs and videos of students’ protests. Another exhibit – a dark, cold room with only a chair in the middle – seems like a torture room. The testimonies of ex-prisoners are read for the museum’s visitors.

One testimony is of Elda Nevares, 60, one of the doñas. But she isn’t the relative of a missing person. Rather, she was forced disappeared herself.

Nevares says that military personnel dressed as civilians kidnapped her in 1979 because she belonged to an armed group called Movimiento de Acción Revolucionaria. She spent three months imprisoned in a basement at Campo Militar 1, a military complex in Mexico City where political prisoners were jailed.

Authorities eventually let her go, but not before threatening her to stay away from political activities, she says.

“Even leaving [jail],” she says, “there was the threat of death, the same for all the comrades, that if we said something or we participated again in any way in the social struggle or any movement, they weren’t just going to kidnap us. It was going to be death.”

She says the museum is continuing their fight.

“It is the act of reclaiming what was the struggle of the missing persons,” she says, “and, at the same time, denouncing that in this country there was and continues to be the practice of kidnapping and disappearance, especially of social activists.”For Nevares, the museum and the doñas’ struggle also represent the hope that they will find their relatives.

“I think that each missing person who saw the light of day was a great triumph for them,” she says, “and at the same time a hope that, unfortunately, hasn’t been fulfilled for many of them.”

The doñas’ motto assure that they haven’t given up hope: “They took them alive – alive we want them.”