Skip to main content
The story you are reading was published on Thursday April 18, 2013. To read more recent stories click here. 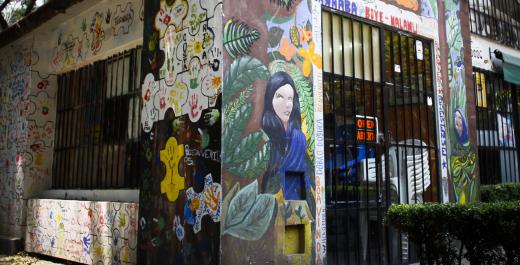 MEXICO CITY, MEXICO – Ana Lucas Álvarez, 53, fled civil war in Guatemala 29 years ago and resettled as a refugee in Mexico City, Mexico’s capital. A member of the Quiché people, an indigenous Mayan group, she still speaks Spanish with difficulty after growing up speaking Quiché.

Language has been just one barrier Lucas has faced since she was forced to leave her country during its civil war from 1960 to 1996.

“It is very difficult,” Lucas says in her non-native Spanish. “You leave your place of origin. You leave your family. You left many things.”

Lucas remembers the exact date she arrived in Mexico – Feb. 10, 1984. She says she was fleeing state repression in Guatemala, which intensified in the 1980s against indigenous communities during the civil war between the government and leftist guerrilla insurgents.

“In the 1980s, the repression became stronger,” Lucas says. “If you want to save your life, we have to leave.”

She says she used to have to hide in the mountains by day, returning home only at night.

More than 200,000 people died or were forcibly disappeared during Guatemala’s civil war, mostly by state and related paramilitary forces, according to estimates by the Commission for Historical Clarification set up by the United Nations. The commission itself documented more than 42,000 victims, of which 83 percent were poor Mayans.

Former dictator Efraín Ríos Montt has been on trial facing charges of crimes against humanity and the genocide of more than 1,770 Mayans during his military rule from 1982 to 1983, one of the most violent periods of the war. A Guatemalan judge who was recently reinstated to the case suspended the trial on Thursday to revisit actions taken while she was asked to step down.

Lucas, her husband and their 3-year-old daughter fled to Mexico City, where they knew other Guatemalans with whom they could stay. She says Mexican authorities at the border gave her an insight into the cultural divide they would face for the next three decades.

“We wore our dress,” Lucas says, “and arriving at the border, already in Mexico, they told us that we could not wear our outfits, we cannot speak our native tongue anymore. You do not forget. It is a wound that stays with you, very difficult to remove it.”

She continued to face discrimination in Mexico because of her indigenous origins and difficulty speaking Spanish, she says.

But then she found a place where people empathized with her struggles: Casa Refugiados. In 2006, she met José Luis Loera, who three years earlier had created a local center for refugees sponsored by Amnesty International and the United Nations High Commissioner for Refugees. In 2012, it became a civil association that collaborates with the U.N. refugee agency.

Lucas now speaks at local schools about her experience and her culture as one of the center’s intercultural promoters.

Casa Refugiados promotes the cultural integration of refugees and immigrants of various origins who reside in Mexico City. Located in the middle of a park in a central neighborhood, it aims to raise public awareness among the Mexican population of how to socially and culturally include people of different origins. It also gives members a platform to share their cultures with Mexicans.

Various accents fill a tiny room at Casa Refugiados. Daniel Otero, the association’s education coordinator, leads a conversation among attendees who fled violence and other circumstances in their native countries. Today, they work together to combat stigma against them locally through the center’s intercultural advocacy project.

As intercultural promoters, they go to elementary, middle and high schools to share their life experiences and cultures to raise awareness among children and adolescents in Mexico. Their message is that being a foreigner does not make anyone less worthy.

“I feel happier, more content, to make public where you are from,” Lucas says. “Before, you fear whether people listen to you. Now, there is the right to express your feeling that you have lived.”

There were nearly 263,000 foreigners residing in Mexico as of 2009, with nearly one-third living in Mexico City, according to the latest data from the Secretaría de Gobernación, Mexico’s interior ministry. As of 2010, there were 1,390 refugees in the country, according to Comisión Mexicana de Ayuda a Refugiados, established under the ministry to attend to the influx of refugees from Central American countries starting in 1980.

Between 70 and 80 refugees and immigrants currently participate in Casa Refugiados’ programs, Otero says. Many of the immigrants the center works with fled violence in their countries but did not know they had a right to seek refugee status or immigrated to Mexico regardless of whether the government had granted it to them.

“We appeal to humanity,” Otero says. “Here, all people are welcome regardless of their migratory status.”

When Lucas learned of the “Casita,” as regulars call it, it was a place for refugees and immigrants to find solidarity and information.

“Sometimes, they used to go just to talk,” Otero says. “Many times, it is what they need: to be heard, to be attended to. To understand and to accompany – that is the spirit of the Casita.”

The center’s objective has evolved throughout the years to become a platform for refugees and immigrants to educate the community. The intercultural promotion project at schools began in 2011. The center also organizes a literary club and cultural activities that are open to the public to promote integration.

Although some of the center’s participants come from Angola, Egypt, Eritrea, Cameroon, Democratic Republic of Congo and Indonesia, the majority are from Latin America. Otero stresses the number from El Salvador and Honduras, two Central American countries engulfed in violence and poverty.

In 2011, El Salvador had the second-highest murder rate in the world: 71 murders per 100,000 people, according to the U.S. Department of State. More than 42 percent of the population was living at the national poverty line as of 2010, according to the World Bank.

Julio Antonio Lemus, 50, says he immigrated to Mexico from El Salvador in 1985 because of “political situations.” The country’s civil war lasted from 1980 to 1992 as the military and right-wing paramilitary death squads clashed with leftist guerrilla organizations united under the Frente Farabundo Martí para la Liberación Nacional. More than 75,000 civilians died, according to the Center for Justice and Accountability, an international human rights organization.

Lemus, like other intercultural activists, is an artisan. He says the painted wooden objects he makes promote his culture in Mexico. They display their crafts at schools and also in exhibitions that the center organizes in parks and plazas. Their livelihoods have become an opportunity to express who they are.

Lucas is no longer afraid people will reject her thanks to her advocacy at schools, but she still says it is safer to not say where she is from. Although she became a naturalized citizen and four of her children were born in Mexico, students sometimes tell her that she is not from Mexico and that people like her only come to steal jobs from Mexicans.

A 54-year-old Colombian woman who is also an intercultural promotor for Casa Refugiados says Mexico is a “supportive and friendly” country. But she recognizes how she has had to confront the stigma that prevails against foreigners.

She immigrated from Colombia 13 years ago after receiving a death threat during the prolonged armed conlict among government forces, paramilitary groups and guerrilla insurgents, mainly the Fuerzas Armadas Revolucionarias de Colombia and Ejército de Liberación Nacional. Beginning in the 1960s and continuing today, the civil strife has killed hundreds of thousands and has displaced millions. Because the woman still fears for her life, she declined to publish her name.

Through her work with Casa Refugiados, she says she aims to teach the local community.

“We are people who come not to compete or take your space,” she says. “We simply bring the culture of our countries and our experiences – because no one wants to be threatened, no one wants to flee their country, no one travels from their country of origin to relocate in another for pleasure.”

Otero summarizes the problems imimmigrants and refugees face upon arriving in Mexico in one word: incomprehension. The Encuesta Nacional sobre Discriminación 2010, the national discrimination survey, found that nearly 50 percent of immigrants said that society did not help them because they did not understand their problems.

Although 73 percent of Mexican respondents considered it positive to have people of different cultures and origins living in their country, 27 percent said foreigners provoked divisions in society.

“I imagine two islands where each project is building a bridge,” he says, “and that bridge is this: the encounter.”

The solution is encouraging Mexicans and foreigners to get to know each other, he says.