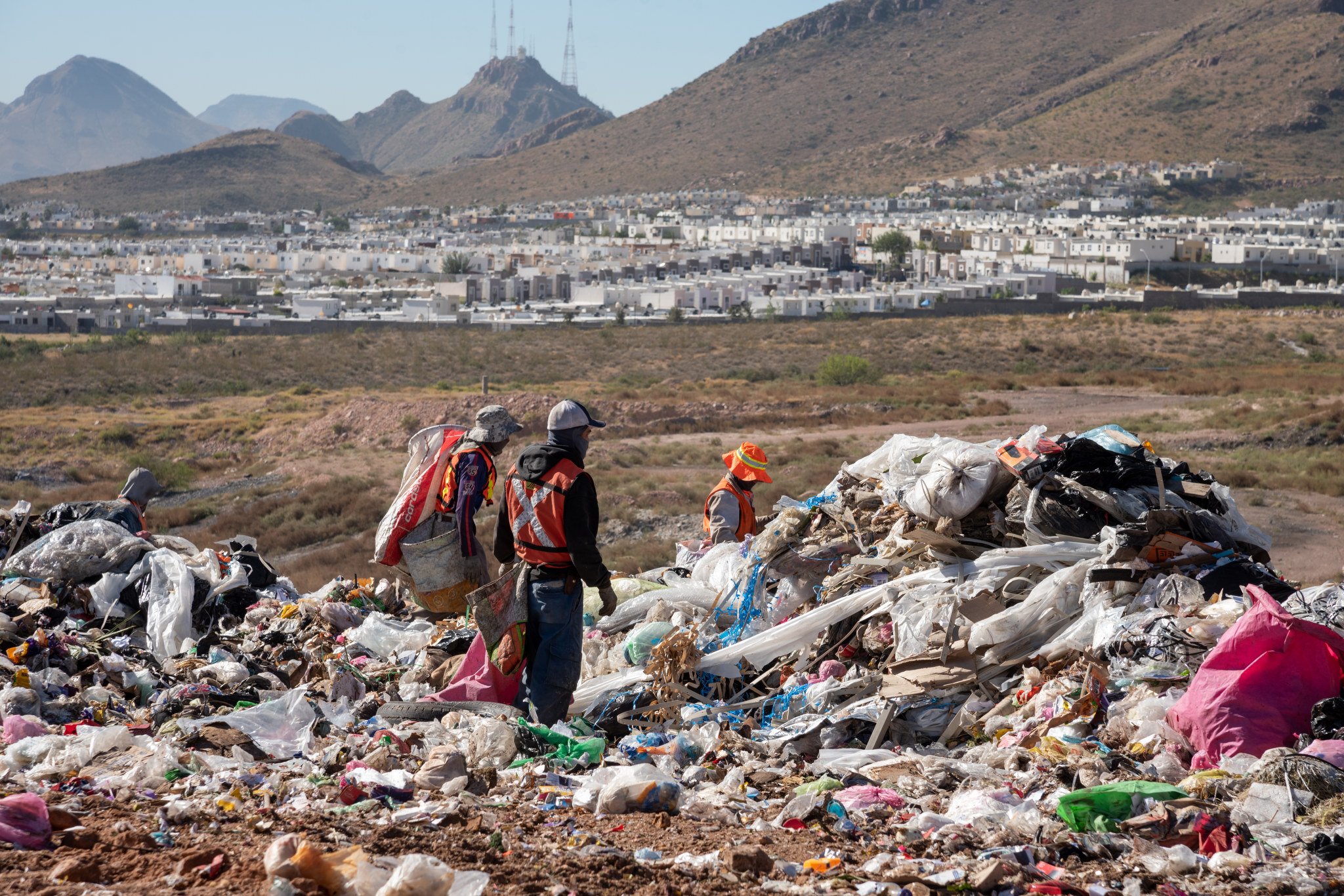 CHIHUAHUA, MEXICO — Plastic bags pile into white mountains at the Chihuahua City Landfill, where space — and time — is running out.

The landfill serves close to 1 million people and stretches across an area that could fit more than 65 football fields (known in the United States as soccer). When it opened in 1993, it was planned to last until 2028. The Municipal Public Services Department now projects that it will reach maximum capacity next year.

Mexico’s environmental movement rejoiced in August 2019, when Chihuahua became the latest state to ban the sale and use of single-use plastic bags, but the pandemic has caused a major setback. During lockdown periods, the country’s household and medical waste rose by more than 80,000 tons per day, according to the National Institute for Ecology and Climate Change.

Activists like Diabb say they have to rewind and remind people that COVID-19 isn’t the only threat to their community’s health. 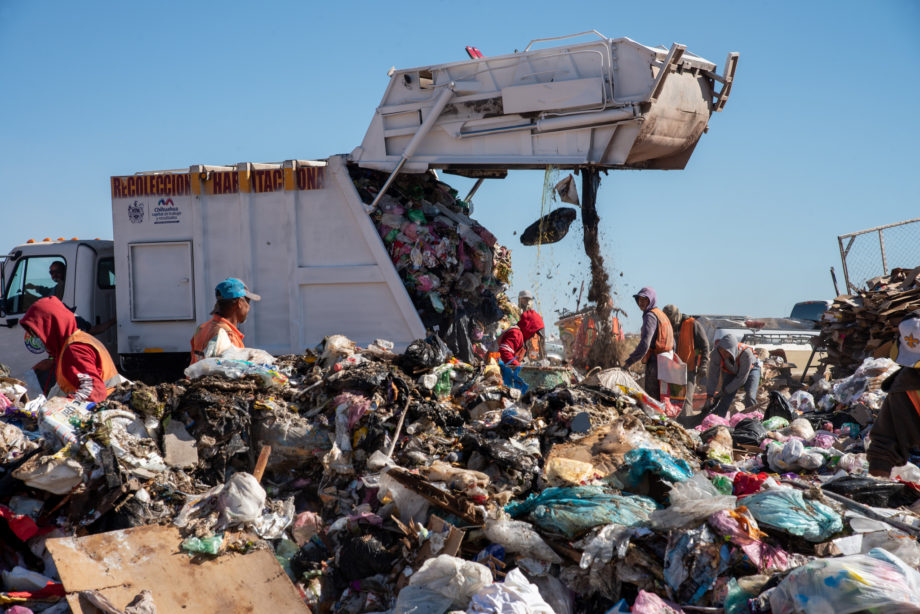 Chihuahua city garbage trucks empty tons of trash from homes and businesses throughout the week, including piles of single-use plastic bags, bottles, masks and utensils.

In a 2018 World Bank survey, 90% of respondents from Mexico expressed concern about the use of nonrecyclable, single-use items — the most of any of the 15 countries surveyed. Among Latin American and Caribbean nations, Mexico was the second-largest plastics generator after Brazil, according to a 2020 report by the Inter-American Development Bank, despite restricting single-use plastics in 20 of its 32 states.

“We’ve fallen behind other countries in terms of how we handle our waste,” says Nancy Jiménez Martínez, an associate researcher at the Regional Center of Multidisciplinary Research at the National Autonomous University of Mexico. The country ranks 11th out of the 15 countries that produce the largest amount of single-use plastic waste but has no national law against it, she says, in contrast to China and France.

Fines for violating Chihuahua’s plastic bag ban range from 2,000 Mexican pesos ($97) to 250,000 pesos ($12,200). But authorities have refrained from enforcing it, noting that single-use items were necessary to meet coronavirus safety requirements. The pandemic’s negative impact on the economy and available workforce also presented obstacles, says Gilberto Wenglas Lara, director of ecology at the Ministry of Urban Development and Ecology.

“The businesses were saying that they were in bad economic shape because of the pandemic, and in that sense, that is why we did not apply fines,” he says, adding that about 80% of his department contracted COVID-19 in the past two years. 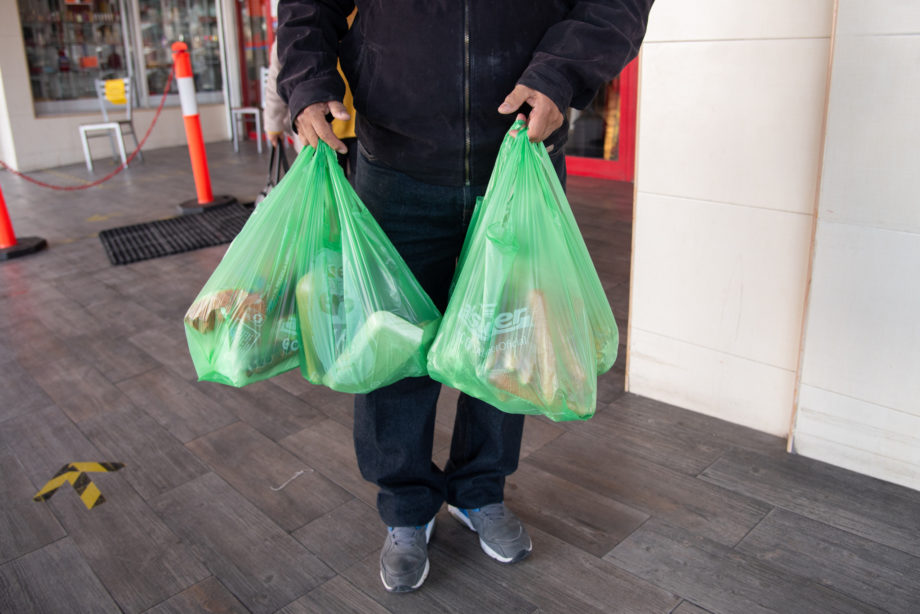 Many shoppers carry their groceries in plastic bags, rather than the reusable totes and baskets that had begun to catch on before the pandemic.

In addition to the disposable masks, gloves, delivery packaging and takeout food containers that became ubiquitous during the pandemic, plastic bags reclaimed their place in supermarkets and stores — even those that once sold reusable totes or encouraged shoppers to bring their own.

“Seeing that there were no sanctions and with the arrival of the pandemic, there was a total relaxation,” says Laura González, a parliamentary advisor to MORENA, the political party that proposed the bans and now pushes for stronger enforcement.

From Wuhan, China to Chihuahua, Mexico, the amount of trash generated by hospitals and households around the world surged during the pandemic. In the U.S., the increase ranged from 30% to 50%, according to Jiménez’s research; in Singapore, during an eight-week shutdown, takeout food packaging alone generated 1,470 tons of plastic waste.

Before the pandemic, Chihuahua’s Organization for Ecological Cooperation, a civic group, would send recycling trucks to schools, churches, housing developments and neighborhoods on the outskirts of town. As of March 2022, they had not yet fully resumed operations.

“It’s very sad because all of that trash that didn’t get separated — the plastic, for example — got sent to the landfill,” says Judith Torres, the organization’s founder.

From March 2020 to January 2022, based on the city’s typical waste disposal habits, more than 2 tons of plastic should have arrived at its main recycling plant. Instead, less than 1 ton showed up, plant officials say. Torres says the rest — including the pandemic-related surge of disposable products — went straight to the landfill. 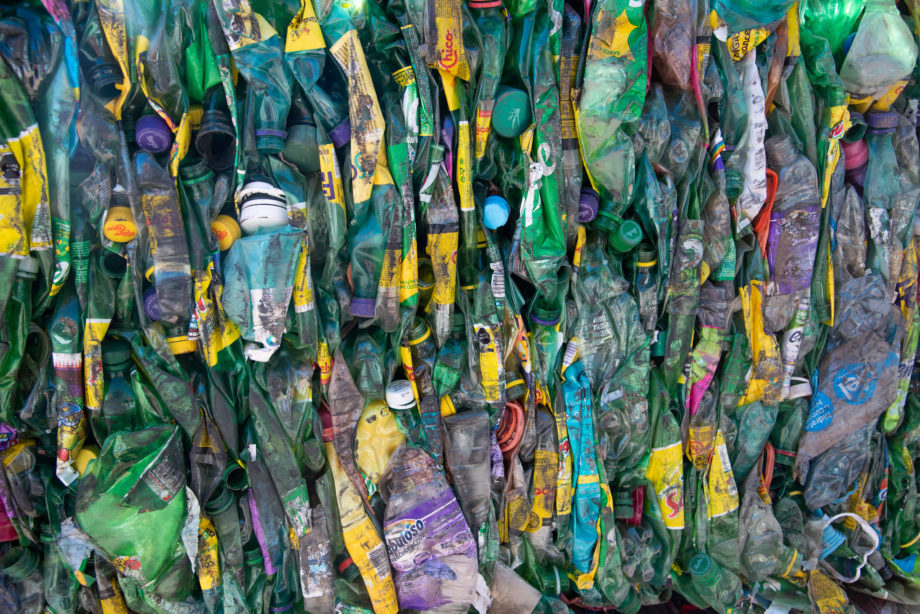 Plastic bottles are compacted to reduce the space they occupy at the Chihuahua landfill, which is approaching maximum capacity.

Through educational programs at schools and community events, her organization reminds residents that they can make a difference by using cloth rather than disposable bags.

“We talk about recycling because it has to be done, but for us, it is the worst and best solution we have,” she says. “The best thing would be to stop using plastic, and then it would not be necessary to recycle. That would be ideal.”

One group has benefited from the situation: the city’s 900 waste pickers, who earn up to 1,000 pesos ($49) per day by separating paper, cardboard, glass and plastic from other trash and selling them to recycling centers.

“The plastic that arrived at the landfill increased by 80% to 90% when the pandemic was at its strongest point,” says Javier Chacón, who has worked in this informal industry for 21 years. “It was good business for us plastic collectors.”

As authorities seek a new landfill site and the Ministry of Urban Development and Ecology works to strengthen the 2019 plastics ban, Diabb and other environmental activists plan to keep encouraging residents to avoid creating more waste than necessary — for the sake of their own health, if not the Earth’s.

“The trip that that plastic ends up taking means that we’ll either breathe it or eat it,” Diabb says. “There’s no other alternative.”