Skip to main content
The story you are reading was published on Friday December 4, 2015. To read more recent stories click here. 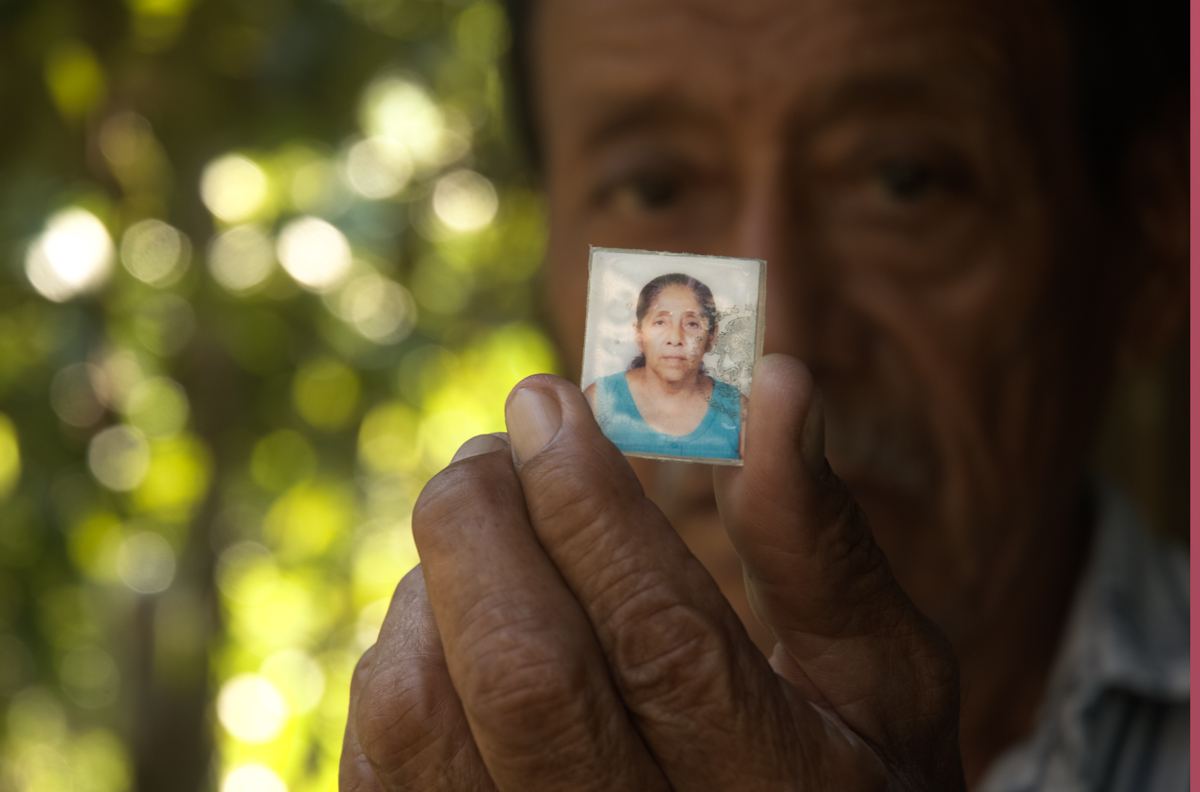 DONAJÍ, MEXICO — Yolanda López Sánchez approaches her chair with great difficulty. The sweltering heat in her home in Donají, a town in the southern Mexican state of Oaxaca, does not help, she says.

López, 75, says she has spent the past 10 days with bone and joint pain, a skin rash and a fever.

These are the same symptoms her husband had before he died in September, she says.

“My husband woke up swollen,” she says. “I got sick too, but I resisted. And him, not anymore.”

López says she doesn’t know what caused his death or her symptoms.

The medicine that her husband, Francisco Machuca Ayala, received from the local hospital didn’t work, she says. The 73-year-old man was sick for 15 days, vomiting constantly and complaining of pain in his bones and irritation in his throat, López says.

Here we can die, and the health center can’t do anything about it. Anaberta Fuentes Sánchez, a Donají resident

The local hospital never told López with certainty what caused her husband’s death, she says. A doctor thought it was an infection, but no details were provided.

His death certificate states that he died from pneumonia, but López says that wasn’t it.

López says she did all that she could to keep him alive. The couple visited doctors and she made a remedy for him from local plants. Now, she says, the remedy has helped her treat her own skin rash, but she still feels bone pain.

But, she is resigned to whatever should happen, she says.

Local officials say López and her husband aren’t alone in their symptoms, but medical officials here don’t know the cause. In October and November, 22 people with similar symptoms died in Donají, says Delman Rafael Ordaz, municipal agent in charge of Donají. Donají has about 2,360 residents, according to 2010 census data.

Most of the people who died were elderly, Rafael Ordaz says.

This sort of medical mystery isn’t unprecedented. Scientists are confused as to how a strain of chronic kidney disease among young sugarcane field workers in Nicaragua is causing thousands of deaths. In the 1990s and early 2000s, an alarmingly high rate of fetal deaths among members of the Shoalwater Bay Tribe in the northwestern United States was unexplained. Even now, experts say they don’t know what caused those deaths.

In Donají, many ill residents blame their suffering on chikungunya, a disease transmitted to humans by infected mosquitoes. Others say they have a water-borne infection resulting from contamination in local rivers.

Maria López Sánchez says she’s been sick for almost six weeks. She says she followed all the precautions that the town’s people and signs posted by the local government have communicated for the prevention of spreading this ailment, such as sleeping with an anti-mosquito mesh, eliminating stagnant water, removing accumulated garbage, among others. But even so, she says, she got sick.

“Pretty much no one here thinks it is the mosquito,” she says.

Through Nov. 20, the national Ministry of Health confirms more than 1,188 cases of chikungunya in Oaxaca, where the state population is about 4 million, says Dr. Cuitláhuac Ruiz Matus, head of the national General Directorate of Epidemiology. More than 10,400 cases have been confirmed this year in Mexico.

Ruiz Matus says those figures do not necessarily reflect the total number of cases, as they base the results on research and estimates. There could be more cases, and they do not know how many of them resulted in death, he says.

According to the World Health Organization, chikungunya is rarely fatal, and symptoms are generally self-limiting and last for two to three days. Chikungunya shares some symptoms with dengue and is sometimes misdiagnosed in areas where dengue is common. There is no cure.

But there’s no definitive evidence showing that the illness claiming lives in Donají is chikungunya.

Antonio Ignacio’s mother, Constantina Vicente Rosas, died on Nov. 22 at the age of 60. Vicente Rosas was interviewed for this story before she died.

Vicente Rosas said in September that she had a fever, inflammation, allergic reactions on her skin and that her bones had been hurting since August. At the time, she said the doctors could not tell her what was causing her suffering.

Shortly before his mother died, Ignacio says, his father had fainted in the next room. Upon hearing that her husband had fallen, Vicente Rosas attempted to get off her bed to see him. She began vomiting blood, Ignacio says, and died soon after.

“No one could do anything,” Ignacio says.

The cause of death is stated on her death certificate as acute myocardial infarction, commonly known as a heart attack, and systemic hypertension.

But Ignacio says his mother never suffered from the latter. He says on her first visit to the doctor after symptoms started, she was diagnosed with chikungunya. But in a second visit, the doctor said her only problem was high blood pressure.

Ignacio says he can do nothing more than accept his mother’s unexpected death, and the lack of clarity as to the cause.

Mercedes Aedo Rodríguez, 61, got sick on Aug. 3. She says her symptoms recur about every 15 days. Her fingers feel stiff, and she has bone pain, she says. She also has a fever, a rash on her arms and itchiness all over.

But Aedo Rodríguez says she was not bitten by a mosquito in the days before she first experienced the symptoms. She believes the illness is caused by petroleum spills in a nearby river.

“I sometimes even think it is the water, because the hands get stiff,” she says.

Victorino Vásquez Martínez, a biologist in charge of environmental projects for the Union of Indigenous Communities of the Northern Zone of the Isthmus, says people often get sick due to water contamination, particularly from oil and gasoline spills.

Since 1999 he has documented oil spills in and along the Isthmus of Tehuantepec, a narrow strip of land surrounded by water in Oaxaca state. The most recent spill, according to the biologist’s report, was in September. There were two spills in less than 24 hours in towns 24 minutes south and 5 minutes south of Donají, causing damage to 18 nearby ranches and pollution in a stream. The report is not clear on how effects in these two towns could have affected Donají residents.

Officials at the petroleum plant responsible for the spills did not respond to multiple interview requests.

Ruiz Matus, the epidemiologist, acknowledges that contamination in the water, as well as pollution of any kind, can result in poor health. But the symptoms for water contamination and chikungunya are too different to be confused, he says, adding that there is absolutely no way these two causes can produce the same symptoms.

“No, not medically. There is no relationship,” he says. “Which is not to say that contamination problems are not harmful to health, yes, but that runs in another lane.”

People affected by the mosquito are likely to experience a fever, headaches and muscular pains, Ruiz Matus says.

But many locals still believe contaminated water is to blame.

Vicenta Guzman Palmeros, 55, had a fever for four days in August. The Donají resident says she also experienced a rash, fainting and bone pains. She thinks contamination is to blame.

“We have had mosquitoes for years, but not having contamination in our town,” she says. “There have been gasoline spills during these past few months.”

Guzman says her health improved after she prepared an herbal remedy.

Juventino Cruz Gutierrez’s wife, Facunda Lopez Hernandez, 73, died on Sept. 11. She complained of a fever and swollen hands and feet, he says. Cruz thinks her illness was from contaminated water.

“I told her to not wash and to not touch the water because it was going to affect her, but she never let someone else wash her clothes,” he says. “And after that, I had found her fallen.”

Cruz, 78, brought her to a private hospital, where the doctors told her she had high blood pressure.

“The next day, she woke up much worse, and it was when she knew she was going to die,” he says. “She told me things that she never spoke of because she knew that she wasn’t going to see me anymore.”

People in Donají say they’re not satisfied with the local medical care.

“Here we can die, and the health center can’t do anything about it,” says Anaberta Fuentes Sánchez, 38.

Sergio Bernal, a medical intern who is the head of the Rural Medical Unit that provides medical care for Donají, Vicente Guerrero and Morelos towns, agrees that health services are lacking. He says just he and one nurse care for all the residents in the three towns, and that they need far more resources than the government currently provides.

“Here the health system is really very bad,” he says.

Bernal says he’s not sure why many people in the community are sick. One of his theories is that it is due to pollution in the air, as many people who are arriving sick have the same symptoms as people who experience chemical poisoning, such as skin reactions, high fever and joint pain.

Still, he’s convinced the mosquito is to blame.

Bernal says he has not conducted a study on the patients because he does not have the means to do so.

Rafael Ordaz, the municipal agent, believes the cause of the illnesses in Donají isn’t limited to one factor. When there are so many people who are sick, so many unclear circumstances and many invariable clues, he says it must be something in the air.