She reported her injuries to the police, who told her, she says, that they couldn’t help. But friends of the artist-activist wouldn’t let it go. They started a social media campaign against her attacker.

“I feel like I’ve been strengthened and like I have many others with me,” she says, referring to the collective of female urban artists who spearheaded the campaign.

MujerDeTepexpan keeps homemade adhesive and papers with pro-feminist phrases and illustrations in her bag. As she walks, the chatty artist plasters her messages on surfaces along her route. She asked to be identified only by her professional name for fear of police harassment because urban art is illegal in Mexico.

She does paste-up, a sometimes-controversial form of protest made popular by feminist art collectives, which have become spaces in Mexico where women speak to each other – and the rest of society – without saying a word. 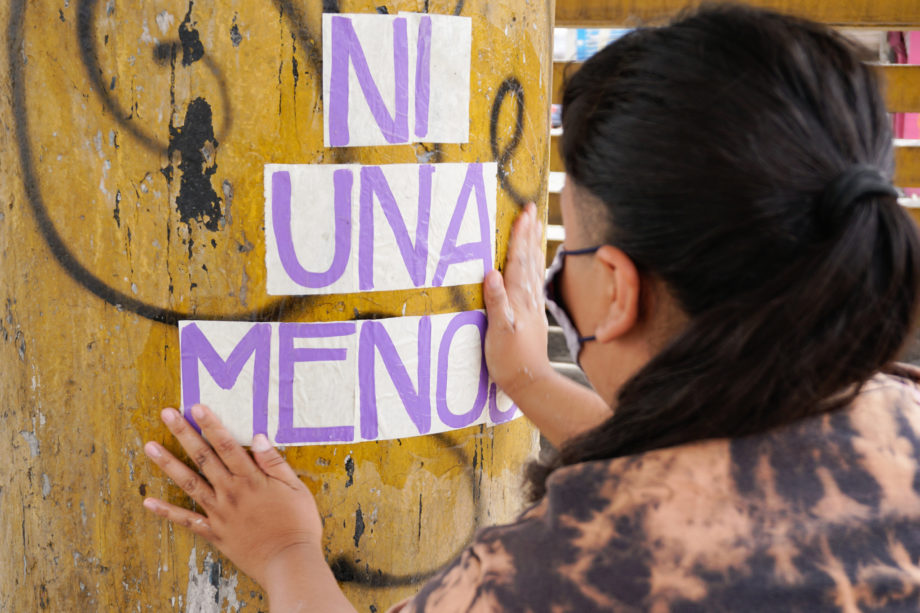 MujerDeTepexpan, an urban artist, pastes up illustrations and phrases she makes in support of women who have suffered violence. “I feel like I’ve been strengthened and like I have many others with me,” she says.

Feminist collectives in general are part of a national effort to draw attention to violence against women, a crisis in Mexico that has spurred marches, demonstrations against the federal Congress, and the takeover of a national government office.

According to government data, preliminary investigations and open cases of crimes against women leaped from 35,271 in 2013 to 43,823 in 2018. Protests have seen a sharp increase too – from four feminist demonstrations recorded in Mexico City in 2017 to 105 last year.

Among those were the now-iconic events of March 8, 2020 – International Women’s Day – when between 60,000 and 80,000 protesters in Mexico City drew global headlines as they marched, danced, shouted resistance slogans, confronted police and put paste-up art on buildings.

“It can mean the first step in recognizing that they have suffered violence,” says Mariana López Saldívar, 25, head of the public policy office of EQUIS: Justicia para las Mujeres (EQUIS: Justice for Women), a feminist organization that seeks to improve access to justice for women. “And for other women, it can also mean repairing the damage.” 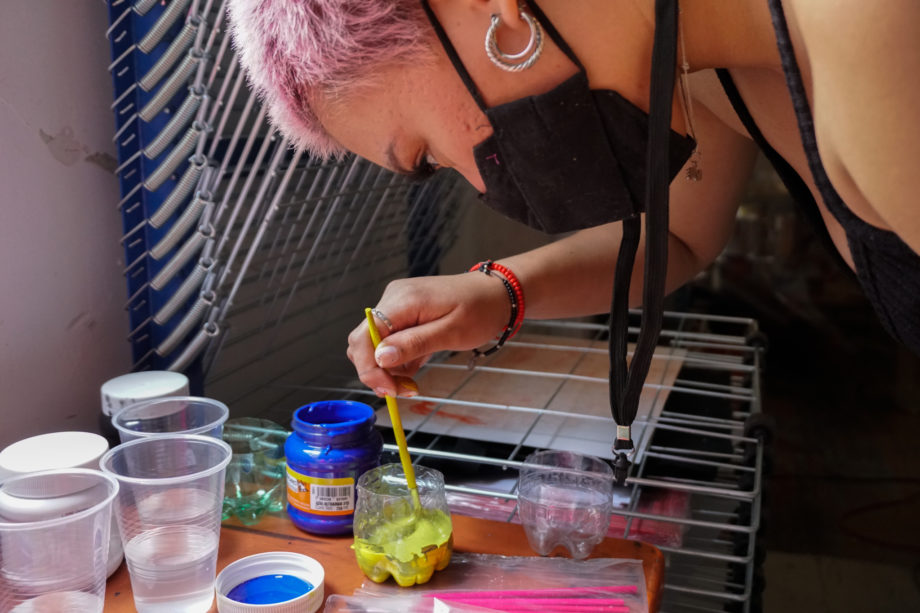 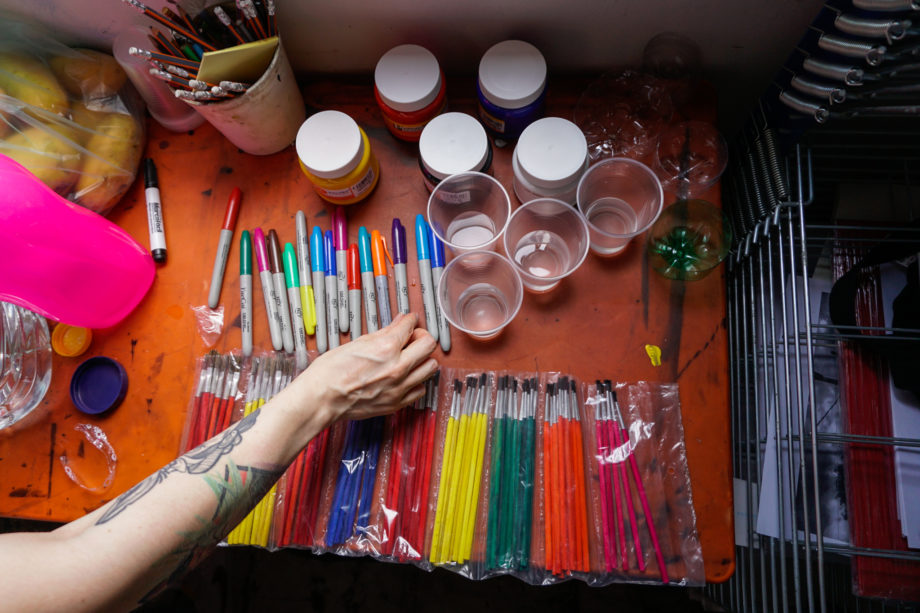 Monserrat Ortega Lemus paints during a paste-up workshop, organized by a collective of feminist artists. When she joined the collective and started doing paste-up, “it was like taking something off and feeling super liberated and happy.”

That may be in part because femicide – the murder of girls and women because of their gender – has mushroomed into one of Mexico’s most urgent social crises. Since 2015, according to government data, recorded cases of femicides more than doubled, to 948 last year. 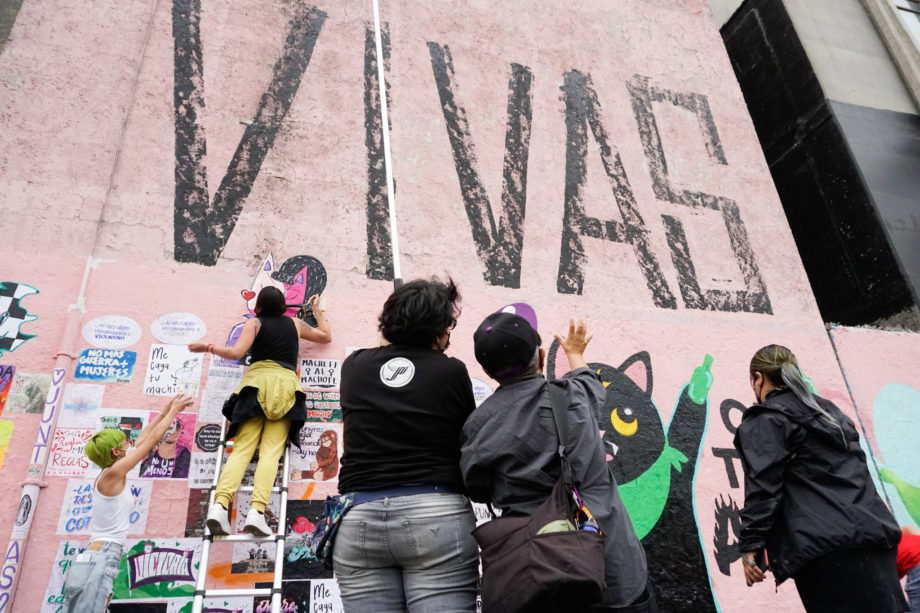 The urban artists’ protest on March 6 attracted more than 35 women, whose resistance slogans included “No es no” (No means no) and “Existo porque resisto” (I exist because I resist).

Andrea Yareli Ortega Ruíz connected via social media with two other feminist artists earlier this year. For International Women’s Day in March, the 22-year-old joined her two friends in downtown Monterrey, a city in the northeastern state of Nuevo León, to do paste-up. Their art tackled a range of issues – from the high cost of feminine hygiene products to the rise in domestic violence during the pandemic. A local newspaper featured their work.

The publicity pleased Ortega Ruíz because it meant more “women can be encouraged to do [paste-up] or to read what we paste and question themselves.”

Feminist protests have become part of Mexico’s public landscape. On March 9, 2020 – a day after the International Women’s Day protest – tens of thousands of girls and women across the country stayed out of work, boycotted shops, remained home from school and shunned public transportation. It was called “A Day Without Women.”

And last September, a group of women invaded the National Human Rights Commission to bring attention to femicide and the forced disappearances of girls and women. They remain there today. 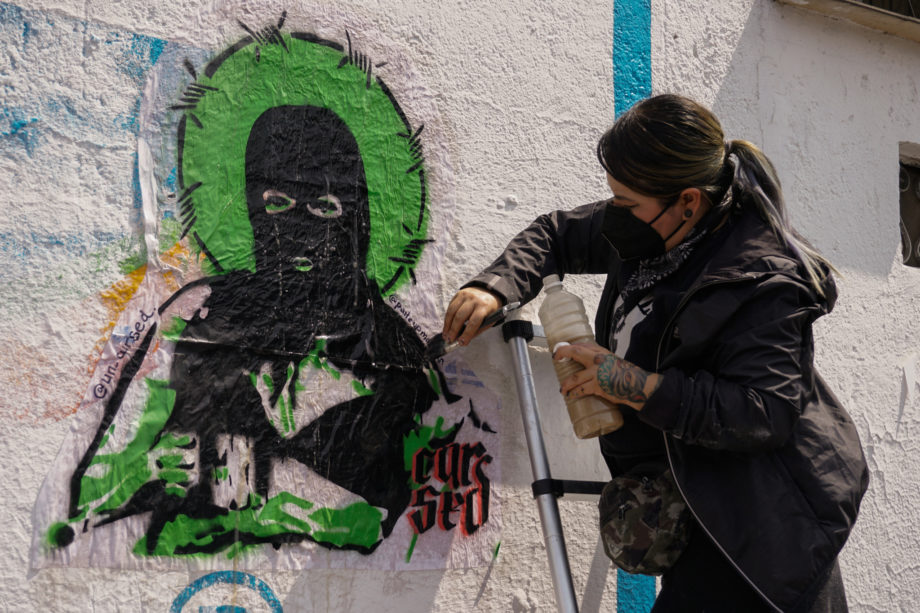 An activist who goes by the name Lily Cursed does paste-up, graffiti and stenciling with feminist themes. “I started to make some self-defense kittens and began to paste my graphics in spaces where I knew there was harassment, [such as] lonely alleys,” she says.

On a 10-by-99-foot wall, a mother depicted herself carrying her daughter, with a caption that read: “If they touch my daughter I’m burning everything.” In the middle of the wall, an artist pasted a poster that read, “CUIDADO, EL MACHISMO MATA” (BEWARE, MALE CHAUVINISM KILLS). Other protest phrases adorned the space: “Me cuidan mis amigas, no la policía” (My friends take care of me, not the police). “No es no” (No means no). “Existo porque resisto” (I exist because I resist).

By day’s end, the wall was bursting with illustrations, phrases and a mural that included images of vaginas, which offended some neighbors. Gloria Martínez says she complained to the mayor’s office about the mural because “that was not right, especially since there are many children who pass by and say, ‘What is that?’” 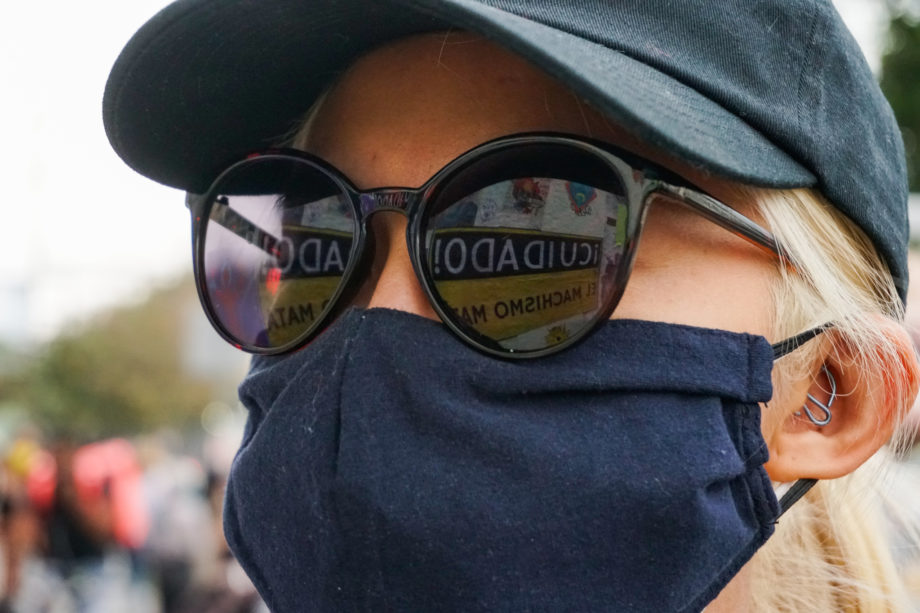 Karina Cedillo, who attended a gathering of the Paste Up Morras (Paste-Up Women) in early March, made a poster that said, “CUIDADO, EL MACHISMO MATA” (BEWARE, MALE CHAUVINISM KILLS).

Another resident, Karla Andrade, who says she supports feminism, rapped the mural as “painting for the sake of painting. They put up nonsense.”

None of that discourages Maricela Saldívar Urrutia, 27, who spent years in a violent relationship. Earlier this year, the calm, cautious artist attended her first paste-up workshop, where she found affection and protection. The community emboldened her to leave her partner.

“What these women are doing is putting themselves up as a representation and a voice of all of us,” says Karina Erika Rojas Calderón, 40, who has taught urban art at the National Autonomous University of Mexico for 18 years. “Urban art is a cry,” she adds. “It is impossible not to see it.”