Skip to main content
The story you are reading was published on Saturday November 28, 2015. To read more recent stories click here. 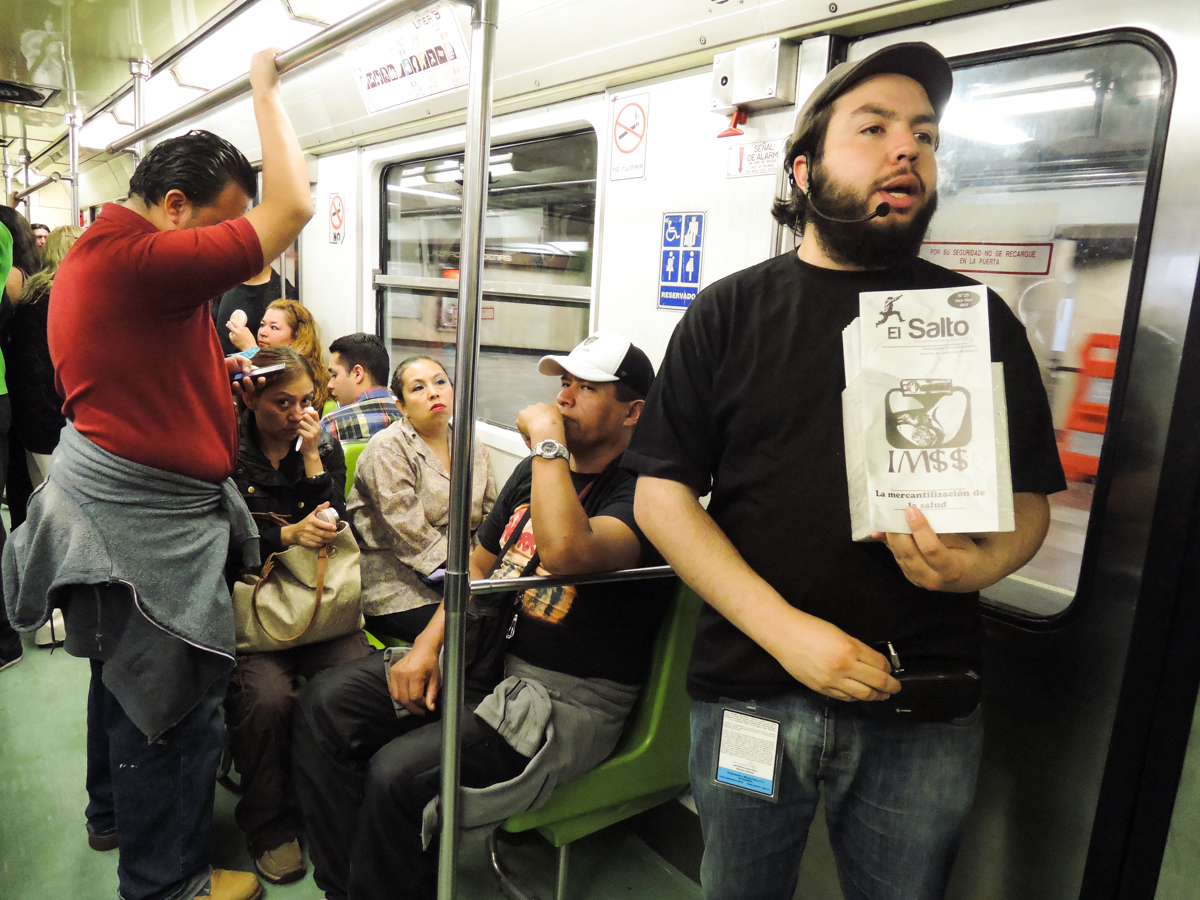 MEXICO CITY, MEXICO — As soon as the metro train doors open, David Uribe Mosqueda exits one car, steps onto the platform and, with just a few seconds to make it to his destination, steps into the next car. He heads to the center, where the passengers can see and hear him best. Holding a copy of the most recent issue of El Salto magazine, he begins the speech he repeats in each metro car.

Uribe Mosqueda, 27, is the publicity coordinator for Despertando a México, which means “Awakening Mexico,” the organization that publishes El Salto. He and about two dozen organization members located in Mexico City call themselves “brigadistas,” or brigadiers, because of their common goal. They spend their days on many of Mexico City’s 12 metro lines sharing details about current news. When a metro rider asks, they sell the magazine.

El Salto, which translates to “The Jump,” has been published since March 2011. Despertando a México has always circulated it in the city’s public transportation system, particularly the metro, members say.

A 2003 Federal District regulation prohibits hawking and sales in metro stations or at their entrances, and that regulation was enforced in August, when the Ministry of Public Safety and the Public Transportation System initiated the “Zero Tolerance” operation to prevent sales, hawking and peddling in the metro.

The brigadiers say some of their numbers were among those arrested in the weeks after the operation launched.

The impact that we have is much greater, because in each car we leave two or three magazines, but 100 people hear us. José Guillermo Soto García, managing director of Despertando a México and content manager for El Salto

Abigail Díaz, a press officer for the Ministry of Public Safety, did not respond to requests for an interview.

But the brigadiers say the ban shouldn’t apply to them. They’re not selling goods, they say, they’re practicing free speech. They filed a complaint and on Sept. 28 won a provisional suspension allowing them to present El Salto’s news stories in metro cars, so long as they don’t profit from the magazine.

Before the operation, copies of El Salto sold for 10 pesos (60 cents). The brigadiers say they don’t make a profit when people pay that amount for the magazine, so they’re still charging that price. The money covers the cost of production and supports the organization, they say.

Despertando a México’s suspension could create a precedent not just for other types of media, but also for people who want to publicize their ideas via public transportation services, according to experts in freedom of speech.

According to information published by the Federal District’s Ministry of Economic Development, there were more than 2,600 vendors in the metro system in March 2014.

Between the operation’s first day on Aug. 17 and Sept. 29, more than 2,500 itinerant vendors were detained and presented before a civil court, according to the Ministry of Public Safety. The press release does not make it clear if that number includes repeat offenders.

El Salto is an independent, non-partisan magazine that publishes local and national news on a range of topics including politics, economics and social issues, members of Despertando a México say. They say the magazine’s mission is to distribute information and promote the use of critical thinking.

Distributing the magazine on public transit is the most effective way to tell people what’s happening around the country, says José Guillermo Soto García, managing director of Despertando a México and content manager for El Salto.

The organization only distributes the magazine on public transportation, including microbuses and light-rail trains as well as metro cars, he says. The brigadiers announce bits of information to passengers, then offer the magazine as a way to learn more. The magazine prints about 25,000 copies of each edition, according to information published in the October-November edition.

If someone wants the magazine but doesn’t have the money to pay for it, the brigadier gives it away, Soto García says.

But the ban on charging for the magazine is, some say, a form of censorship.

El Salto’s case could set an important precedent for anyone who wants to express ideas on public transportation, Knapp Moreno says. He is not involved in the magazine’s legal case.

Despite the injunction, the brigadiers say they still face problems. They carry copies of the suspension with them because enforcement officials don’t always know that they’re allowed to conduct their business in the metro system, they say.

Neither Jorge Gaviño Ambriz, director general of the transportation system nor Diana Irene Fernández Pliego, head of the system’s administrative unit, agreed to comment for this story.

Clementina López, 60, bought a copy of the magazine from Uribe Mosqueda in early November. When López heard him talk about the magazine’s contents, she says she was interested in its information about the healthcare system.

In the days before she met Uribe Mosqueda, López says she had already heard another brigadier from the organization in one of the metro cars.

“But the police took him off,” she says. “So we couldn’t finish hearing what he was saying.”

López says vendors who do not bother or hurt anyone should be allowed to sell their product in the metro system.

“Why don’t they do that to the itinerant vendors who do hurt us more with the music, with the shouts?” she says, referring to the noise made by the people promoting music albums.

Despertando a México’s provisional suspension remains in effect until judges determine whether to grant a permanent suspension, brigadiers say. It’s not clear when a decision will be made.

“The impact that we have is much greater, because in each car we leave two or three magazines, but 100 people hear us,” Soto García says.