Skip to main content
The story you are reading was published on Sunday August 14, 2016. To read more recent stories click here. 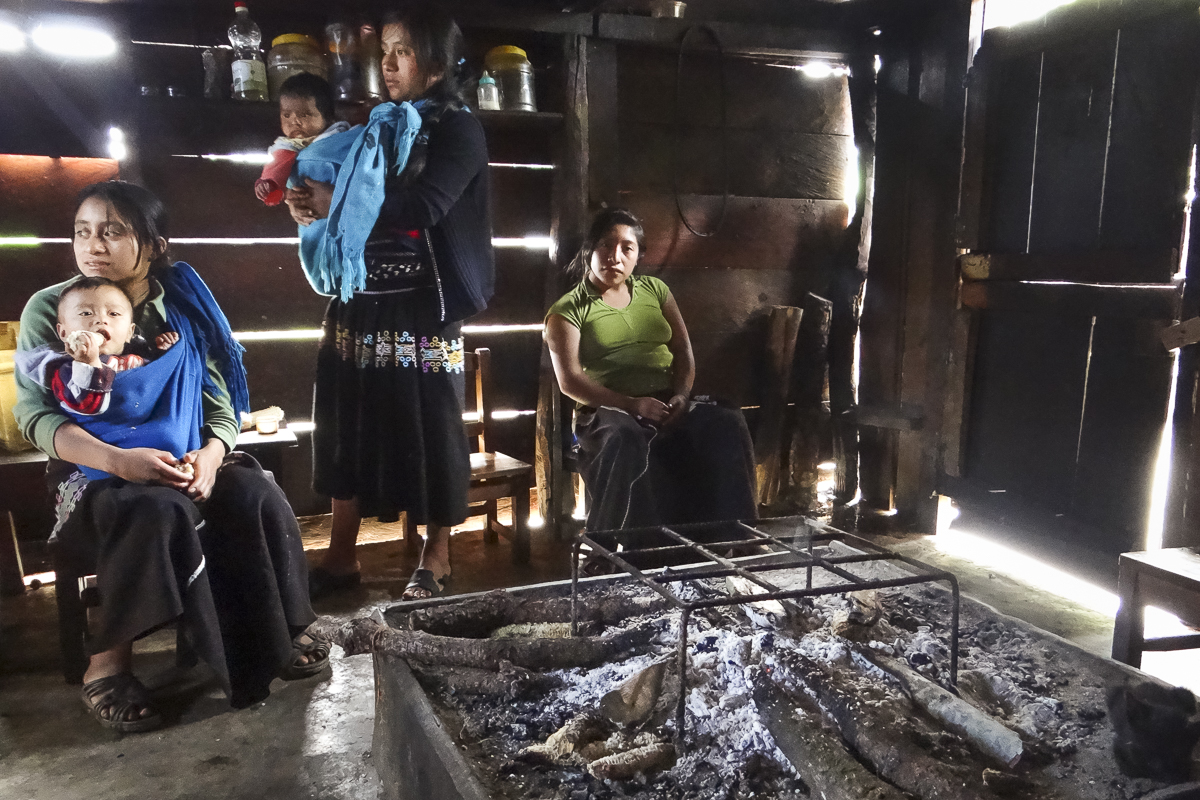 SAN CRISTÓBAL DE LAS CASAS, MEXICO — Dark smoke fills every corner of the small, makeshift kitchen. María Santis López’s silhouette is barely visible through the dense cloud as she sits on the hearth where she cooks meals for her family.

Santis López, 50, says she breathes in large amounts of smoke every day when she cooks on her open hearth, which consists of overlapping stones and firewood that hold the cooking pots. As she speaks, smoke spreads through the house.

“My mother taught me how to place the stones and the wood to make a good fire. My grandmother taught her; all the women have always cooked this way,” Santis López says.

Santis López says she remembers going with her mother and grandmother to collect firewood even when she was a young girl. They taught her how to choose the best wood for cooking. Some of her earliest memories are those of playing around her mother’s hearth.

The use of open hearth furnaces is common here in the Chiapas Highlands in Chiapas state. Firewood and charcoal were the primary sources of cooking fuel for about 70 percent of the region’s households, according to 2010 government data. Statewide, about half of all households use those forms of fuel.

“Sometimes we get a bad cough, or sometimes our eyes get very watery, or our skin burns,” Santis López says.

Respiratory and eye problems are common among women in this area who use open hearths, women and doctors say. Those hearths are similar to campfires, with exposed firewood and no way to direct the smoke.

One local organization agrees, and is continuing long-standing efforts to help women switch to closed-hearth cooking, in which firewood is inserted into a stove of sorts. A closed hearth concentrates heat and directs smoke into a chimney.

That year, 15 hearths were built with the program’s help in the municipalities of Zinacantán and Pantelhó.

But there’s more work to be done. The program today continues in Tenejapa and Huixtán municipalities, and there are plans to build an additional 200 hearths there by 2017, Martínez Coria says. If that goal is met, the program will have assisted in building more than 3,000 hearths since it began.

Martínez Coria says the organization often pays for the supplies needed to build the hearths, in which cases the families provide the labor. When the funds aren’t available to cover the costs, the families save money, buying pieces as they can afford them. One hearth costs about 1,550 Mexican pesos ($84). 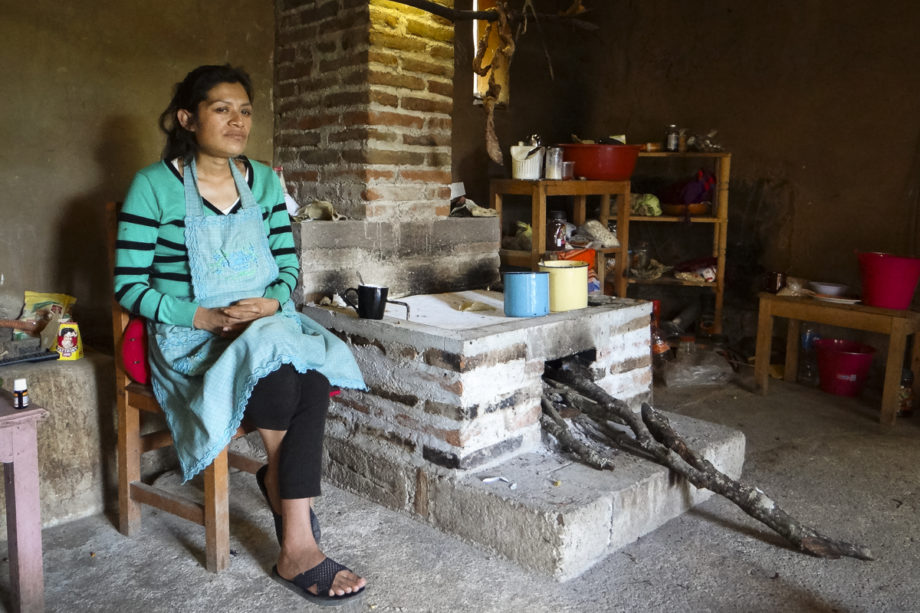 Xunka Hérnandez sits near her family’s closed hearth, which her mother, Magdalena Gómez, built with the aid of Foro para el Desarrollo Sustentable, which has helped build closed hearths for families who once cooked over open fires in their homes.

Building closed hearths is a big cultural challenge for families, and some families initially don’t want to adopt them, says Nolberto Gutiérrez, a member of Foro para el Desarrollo Sustentable. But, he says, they are convinced when they see the positive results from the women’s reduced exposure to smoke.

“Look, my face is clean now, it has no soot, my clothes are clean, my kitchen, my dishes, everything is clean,” she says. “Even my lungs are clean.”

There was initial resistance to closed hearths because it was something different, she says, but now all the women in the cooperative have them.

But many women, like Santis López, continue to use open hearths, despite the health risks that they feel personally and that health officials track as a point of concern.

Long-term exposure to particles emitted from burning wood can cause respiratory problems. They’ve been associated with reduced lung function, chronic bronchitis and premature death, according to the U.S. Environmental Protection Agency.

Look, my face is clean now, it has no soot, my clothes are clean, my kitchen, my dishes, everything is clean. Even my lungs are clean. Magdalena Gómez, is a member of Mujeres Sembrando la Vida, a female artisans’ cooperative that partners with Foro para el Desarrollo Sustentable to help women build closed hearths

More than 4 million people die prematurely due to illnesses caused by the household air pollution from cooking with a solid fuel, according to the World Health Organization. A 2004 analysis published by the WHO concluded that women over 30 years who were exposed to solid fuel smoke are on average about three times more likely to develop chronic obstructive pulmonary disease than women who had not been exposed.

The use of firewood as fuel in the Chiapas Highlands is a historical and cultural practice. In previous decades, women and children, mostly from indigenous families, collected firewood from communal forest areas to use for cooking, says biologist Araceli Calderón, who has studied firewood use in this region.

Nearly 70 percent of the region’s population is indigenous, according to 2010 government census data.

Because women in this area have experienced a constant exposure to firewood smoke since as early as infancy, it is one of the leading causes of respiratory and eye disorders, says Yadira Pérez, the head physician at the Unidad Médica Rural, a government health center in Zinacantán.

“Most of them are always sick with cough, flu, asthma, conjunctivitis, redness of the eyes, of the skin,” she says.

Women who aren’t swayed by the possibility of better health might be convinced to switch to a closed hearth because it would likely save them money.

Micaela Vázquez, 56, says it took her almost two months to get comfortable with her closed hearth because she initially used too much wood and the fire kept going out. But then she realized that she could use less than half the amount of wood she used when she had an open hearth.

“[And] since I no longer breathe in all the smoke from the firewood, I don’t get as sick,” Vázquez says.

Families often have to buy firewood, which incurs a financial cost in addition to the health risks. Santis López and Gómez say access to firewood from forests is becoming more limited because of local logging. Much of the leftover wood is not suitable for cooking and can produce even more smoke than usual.

Firewood can be bought from local and street vendors for 500 pesos ($27) per “tarea,” which is a unit of measure commonly used by locals in the region’s indigenous towns, which averages to about one cubic meter (35 cubic feet) of product, or 40 to 50 kilograms (88 to 110 pounds) of wood.

Since the hearths are a closed structure with a griddle and a chimney, the wood burns better and the energy intensifies, Gómez says. Since switching to a closed hearth she is saving a lot of money, since she now uses only half a tarea of firewood each month.

“At first they seem difficult to make and more difficult to use. But once one learns, everything is easier,” Gómez says. “I learned.”