Skip to main content
The story you are reading was published on Saturday October 31, 2015. To read more recent stories click here. 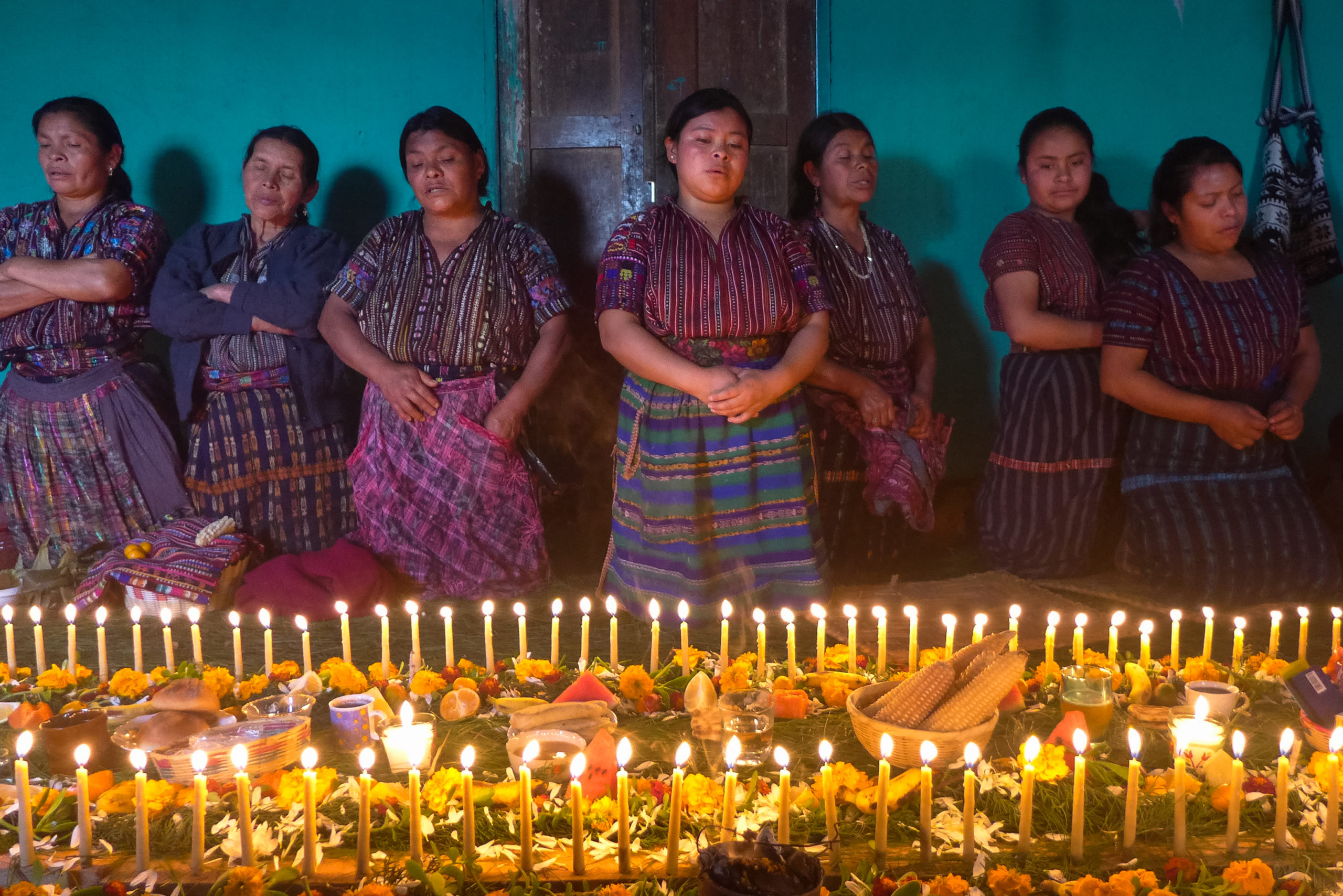 SAN FRANCISCO – Día de los Muertos, or Day of the Dead, is truly a celebration of life.

This holiday, which blends indigenous traditions with Catholicism and is observed throughout Latin America, celebrates the richness and significance of the lives of the deceased. Families gather in cemeteries and private spaces for two days of rituals, altar offerings and prayers to encourage a visit from the souls of the dead. In public events, performers dressed as ornate, colorful skeletons wander through the streets.

People spend the week before Nov. 1 and 2 preparing for the holiday. Families clean graves, vendors construct altars for sale, florists arrange bouquets of marigolds, and artisans mold skull figures made of clay.

Though more commonly identified with Mexico, Día de los Muertos also has significance in Guatemala. The differences do not lie in nations but rather are within areas and regions throughout the two countries. This deeply personal event takes on a life of its own in each town and state.

Global Press Journal reporters in Mexico and Guatemala demonstrate in this photo series how preparations are a meticulous and purposeful process in this symbolic and emotional celebration of life. 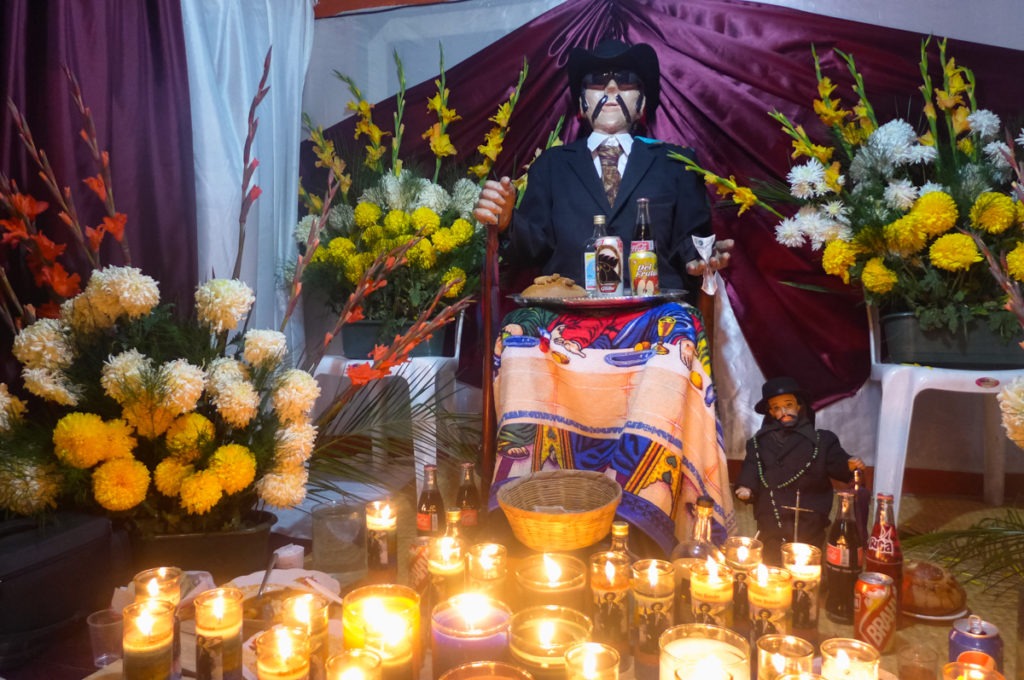 Many people in Sololá have a statue of San Simón, a folk saint, in their homes. For Día de los Muertos, they place candles, alcoholic beverages, flowers and other offerings in front of him, hoping for a blessing. 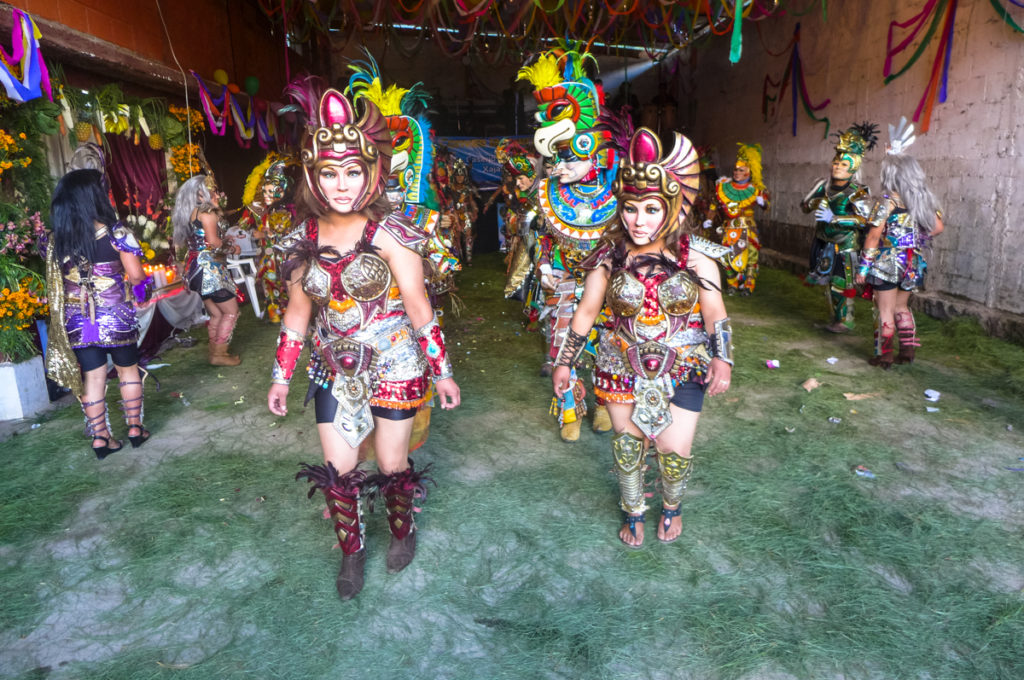 Three dozen members of the “Fuerza Juvenil” dance group, which translates to “Youth Force,” perform in Sololá in honor of San Simón. Their costumes and masks are meant to resemble the gear of traditional Mayan warriors. 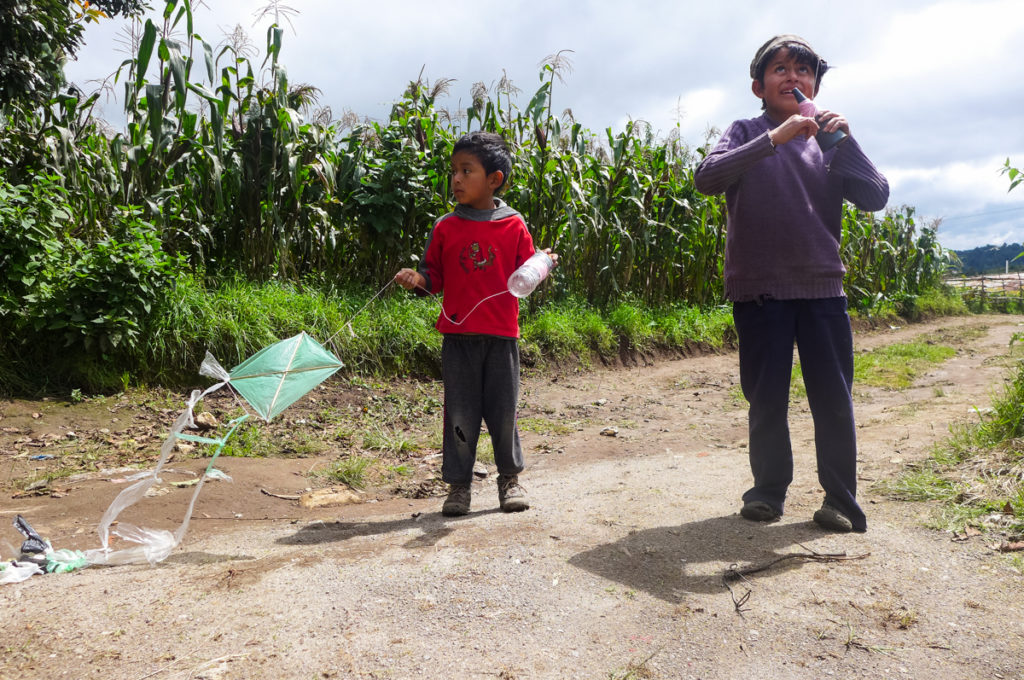 Brothers Hugo Pecher, 5 (left), and Denis Pecher, 10, help each other with their kites. In some rural areas of Sololá, children make kites to fly on Día de los Muertos. 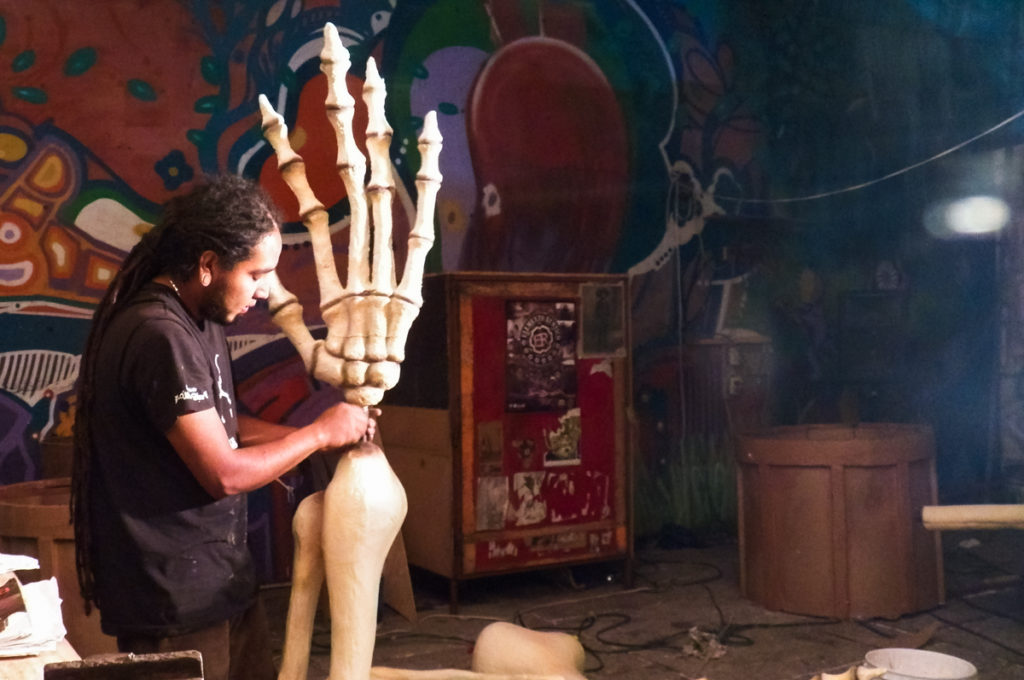 An artist assembles large pieces that will be used in an altar for Día de los Muertos, to be erected in the Zócalo, the main and historic square in Mexico City, the country’s capital. The altar is meant to commemorate those who died in Mexico City’s 1985 earthquake. 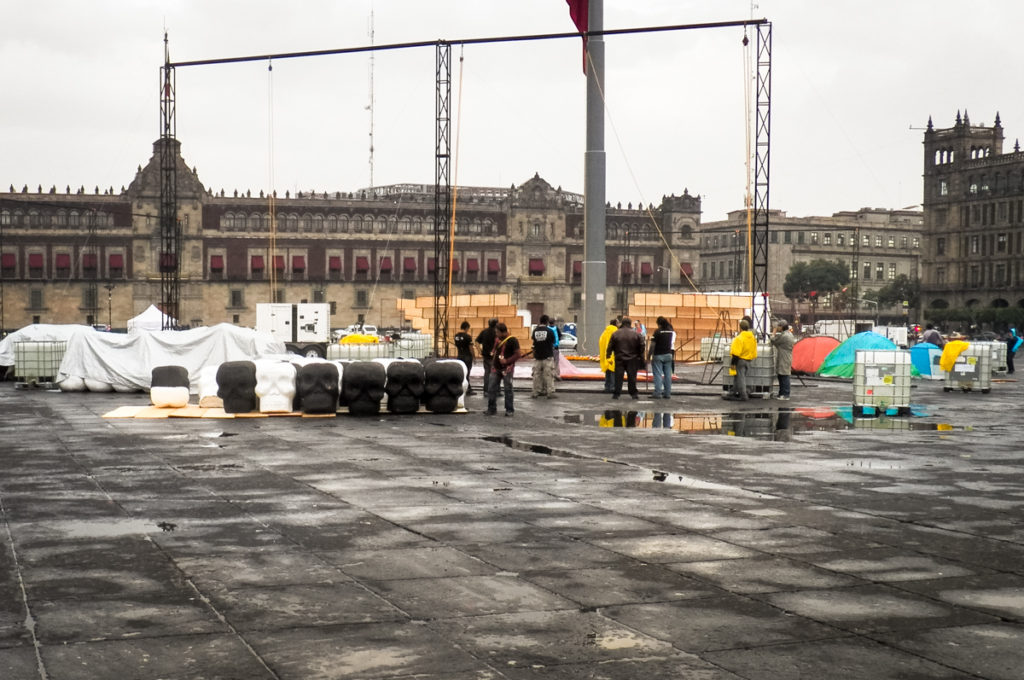 Workers prepare to erect the altar in the Zócalo, in preparation for the weekend Día de los Muertos festivities. 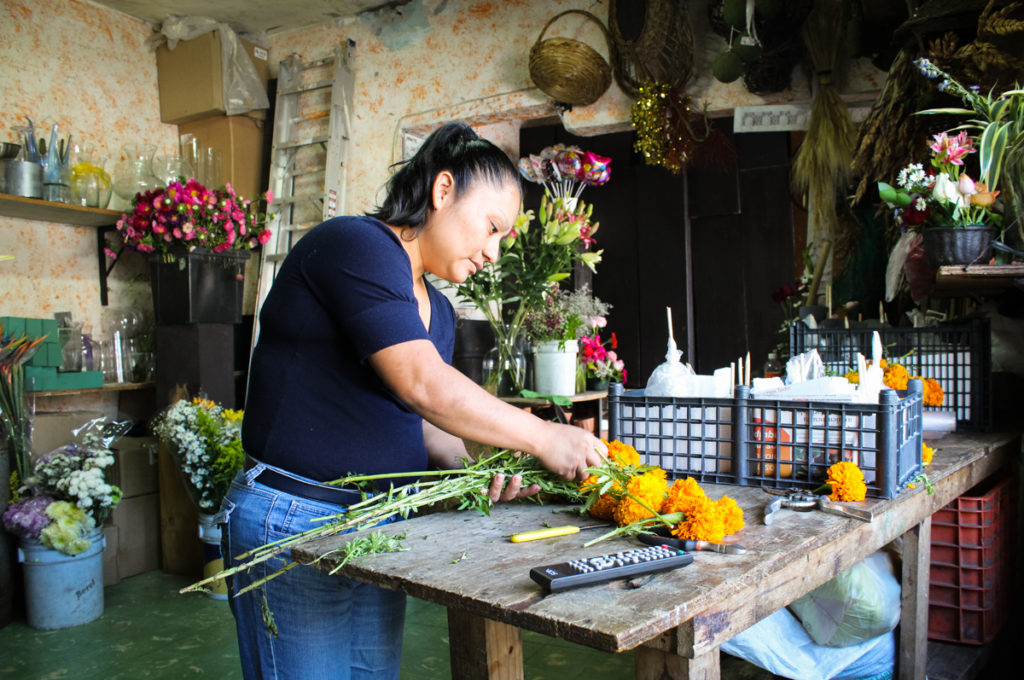 Cristina Sotero Vargas, an employee at the Paraíso Florería, a flower shop in San Pedro Garza García, a municipality in the Mexican state of Nuevo León, is preparing a bouquet of cempazúchitl, a type of marigold. It is known as the flower of the dead for its use during Día de los Muertos. Sotero Vargas says customers only request this flower for the holiday to place at the gravestones of family members. Cemetery visits are a traditional aspect of the holiday. 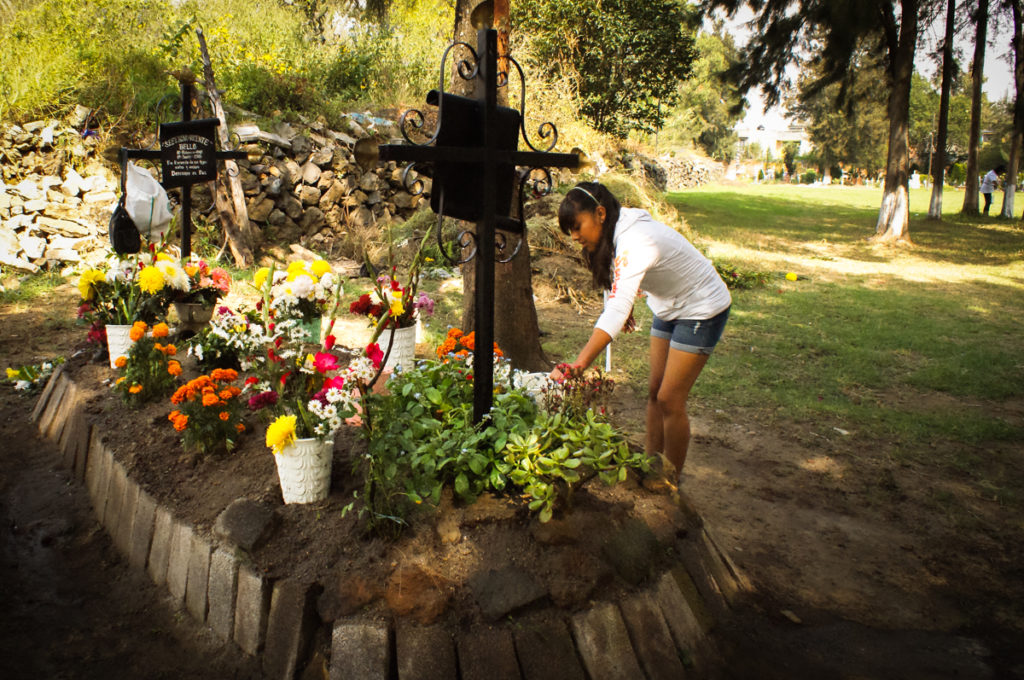 Adelaida, 14, helps her mother clean her grandfather’s grave at a cemetery in San Lucas Xochimanca, a town in Xochimilco delegation in Mexico’s Federal District. Families work together to clean and decorate the gravestones in preparation for Día de los Muertos. 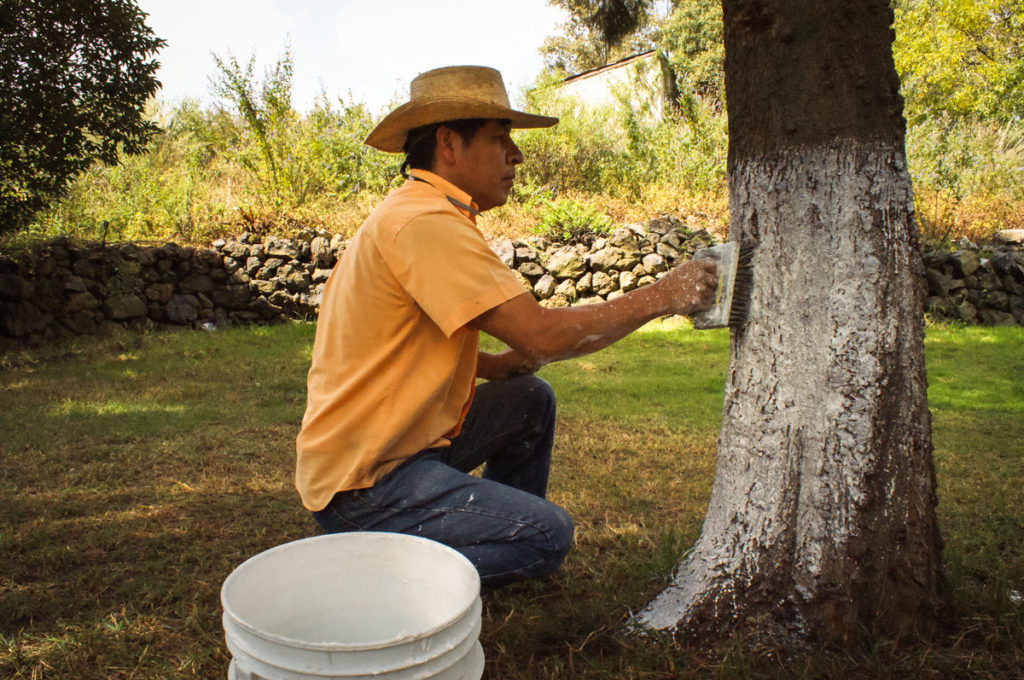 Agustín Cruztitla Torres, 44, brushes a mixture of calcium oxide powder with salt on the tree trunks at the cemetery in San Lucas Xochimanca. This practice is meant to keep pests away, as well as to decorate the tree. Cruztitla Torres and his wife go to the cemetery every week to visit the grave of their son, Aldo Cruztitla, who died in Aug. 2012 at the age of 10. The popular belief is that the souls of children return to earth on the night of Oct. 31, which is why he and his wife stay at the cemetery all night. 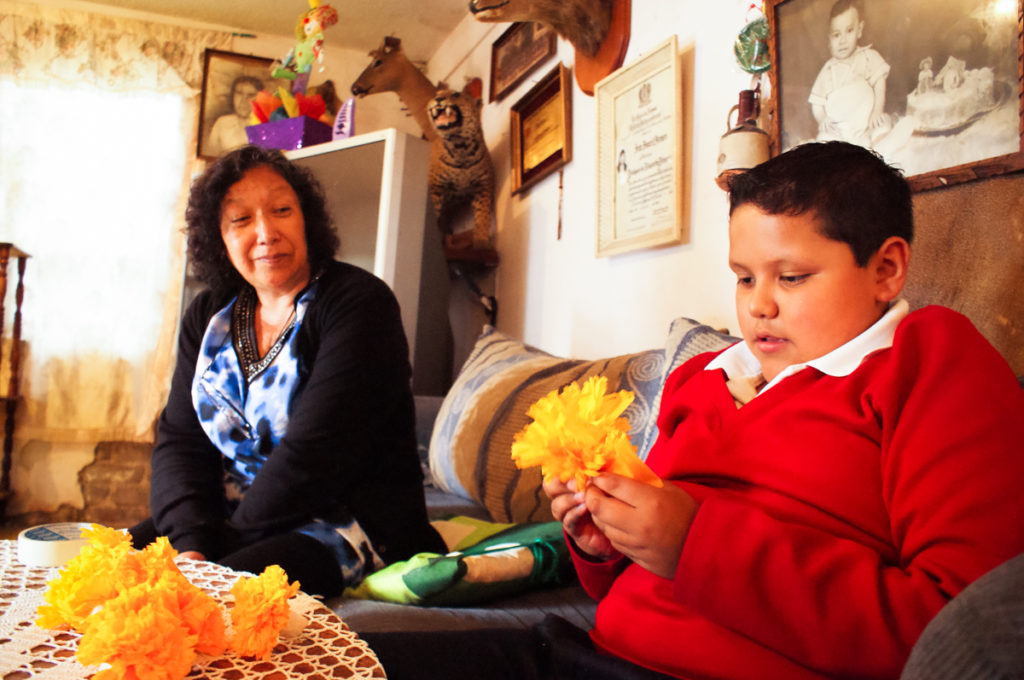 Yael Salcedo (right), 10, makes flower arrangements out of paper for the offering at his school in Xochimilco, with the help of his grandmother, Patricia Becerril Romero. 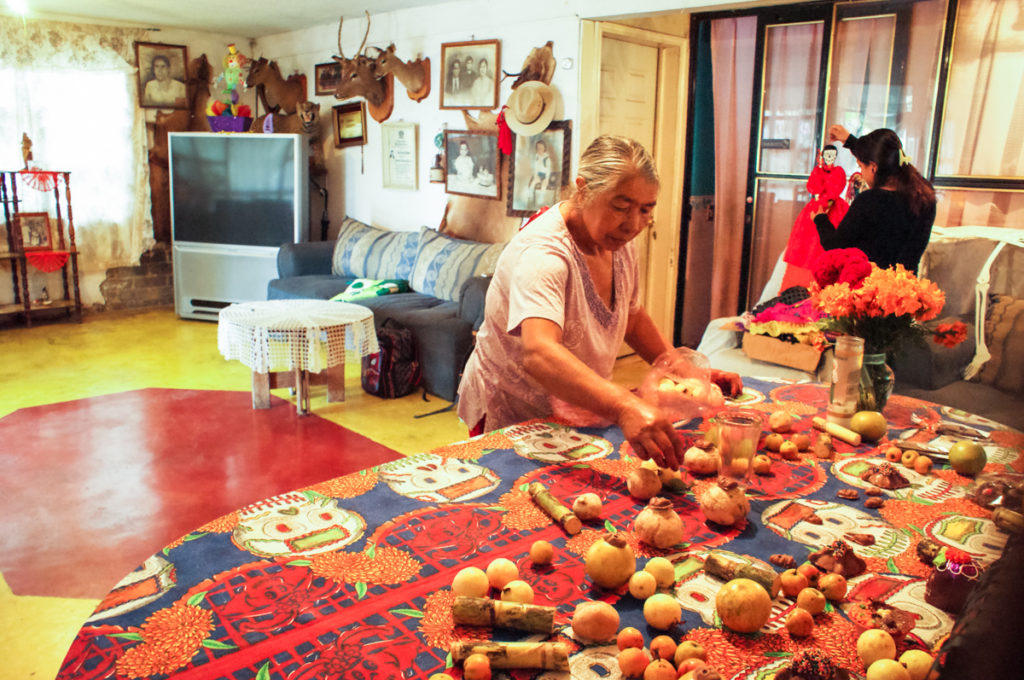 Eleuteria Romero Contreras, 66, great-grandmother of Yael Salcedo, places an offering for the holiday on the table in her dining room in Xochimilco. 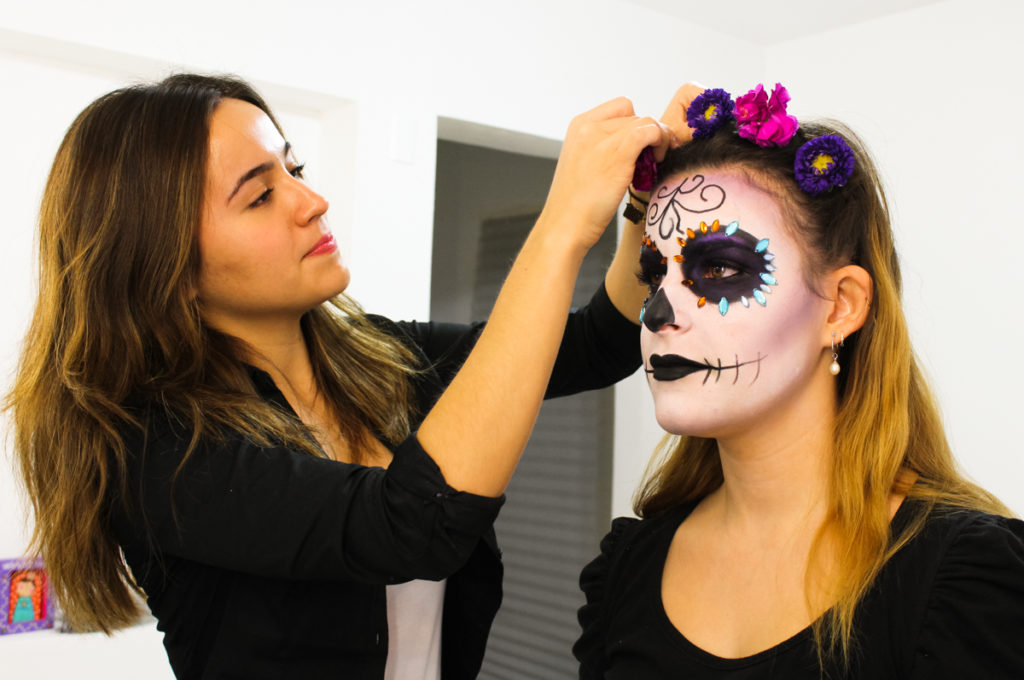 Annie de Hoyos (left), 22, a makeup artist in San Pedro Garza García, applies flowers to a headband she created for Itziar Oloris de la Garza, 22. In Nuevo León, many young women prepare for Día de los Muertos by wearing La Catrina costumes at contests and private parties. La Catrinas are a satirical representation of the young and wealthy women of the Mexican Revolution.