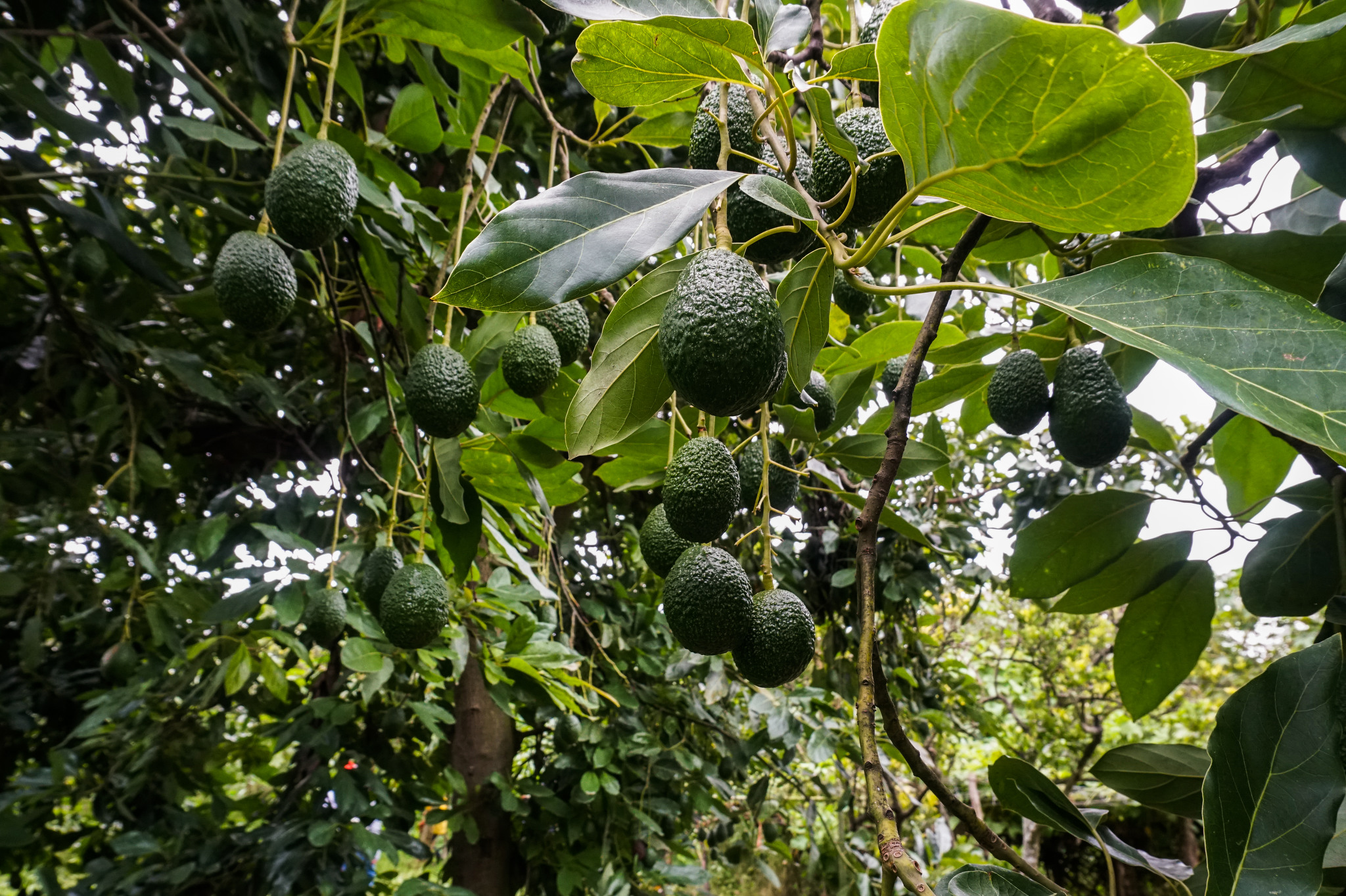 ZAPOTLÁN EL GRANDE, MEXICO — Ten minutes away from downtown Ciudad Guzmán, the municipal capital of Zapotlán el Grande, is a small century-old ranch, where fruits and vegetables sprout from the ground and fall from the trees. It’s a picture of biodiversity fast fading from the western state of Jalisco.

Ranch owners Rogelio Trejo and Yaskara Silva, who inherited the land from Trejo’s parents, have seen the change take place. Once upon a time, sage would turn surrounding mountains into a sea of blue-green. Now, there are avocado farms as far as the eye can see.

Mexico is the world’s seventh-largest agricultural exporter, with agro-industrial exports expected to reach $46 billion this year, the highest in 30 years. Among its most significant exports is the avocado, of which it is the world’s top producer. Consumed locally for millennia, in recent years, avocados have skyrocketed in popularity outside of Mexico — especially in the neighboring United States, which consumes 3 out of every 4 Mexican avocados sent abroad. During the Super Bowl alone, according to one 2020 estimate, U.S. football fans eat their way through 7% of annual consumption in a single day. Until this year, all avocados exported from Mexico to the U.S. came from a single state: Michoacán. This summer, however, Jalisco became Mexico’s second supplier to the lucrative market — an occasion described by Governor Enrique Alfaro as a “historic day for Jalisco and … the development of our countryside.” Small farmers in the state, however, faced with the consequences — environmental and otherwise — of increasing avocado production are far less enthusiastic. 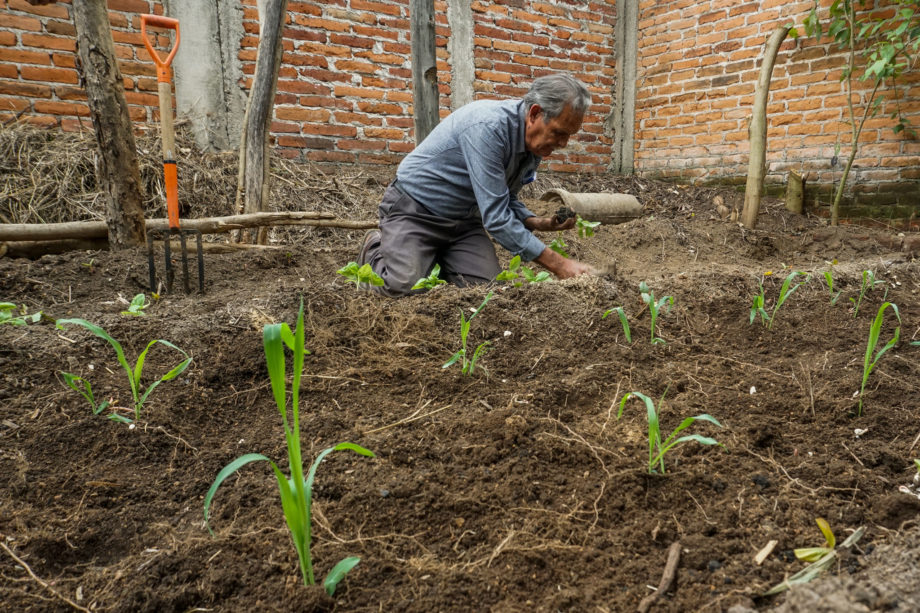 “We noticed there were no corn leaves for making tamales because corn is no longer being cultivated,” says Carmen García, a feminist educator, referring to Zapotlán el Grande. In 2021, more than 57% of farmed land in the municipality was taken up by avocado orchards, accounting for more than a fifth of the state’s total avocado output. Jalisco ranks second in avocado production in Mexico, although it lags far behind Michoacán in terms of total output. But production is growing faster here than anywhere else. According to data from the government’s agriculture and fisheries information portal, avocado cultivation increased by 527% between 2012 and 2021.

Farmers are experiencing the effects of this expansion in multiple ways. According to a study by Alberto Gómez Tagle, of Universidad Michoacana de San Nicolás de Hidalgo, in the city of Morelia, avocado farms require four to five times as much water as an equivalent area of pine forest. When avocado trees are irrigated, because their roots are relatively horizontal, water is less likely to seep into the subsoil — in other words, an avocado tree can replenish only a fraction of soil moisture compared to a pine tree. Silva and Trejo’s well, which they use to water their farm, would typically accumulate 3 to 4 meters of water. Now, one meter is a bounty.

“Last year, we lost our first harvest of vegetables due to lack of water,” Silva says. 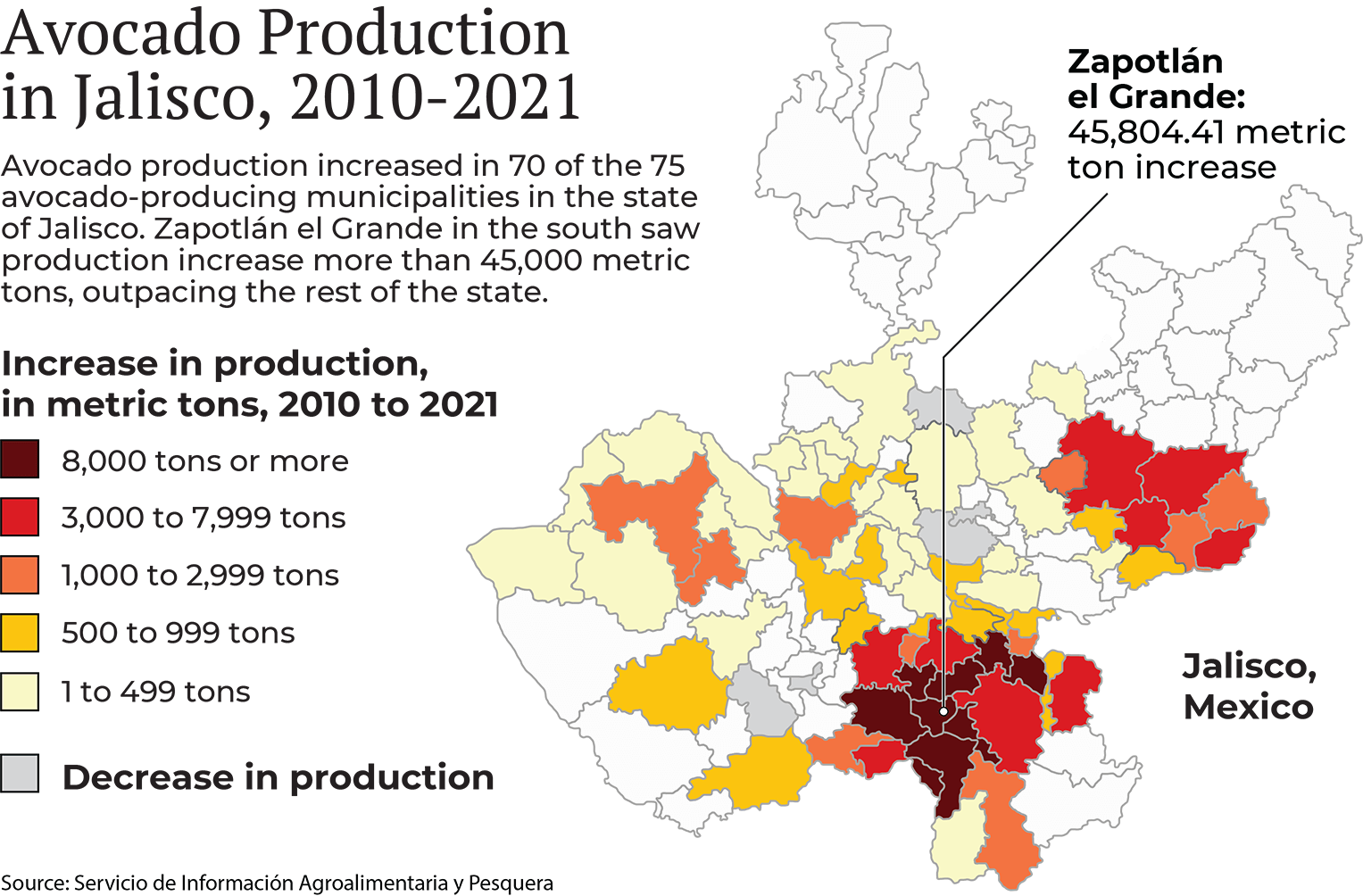 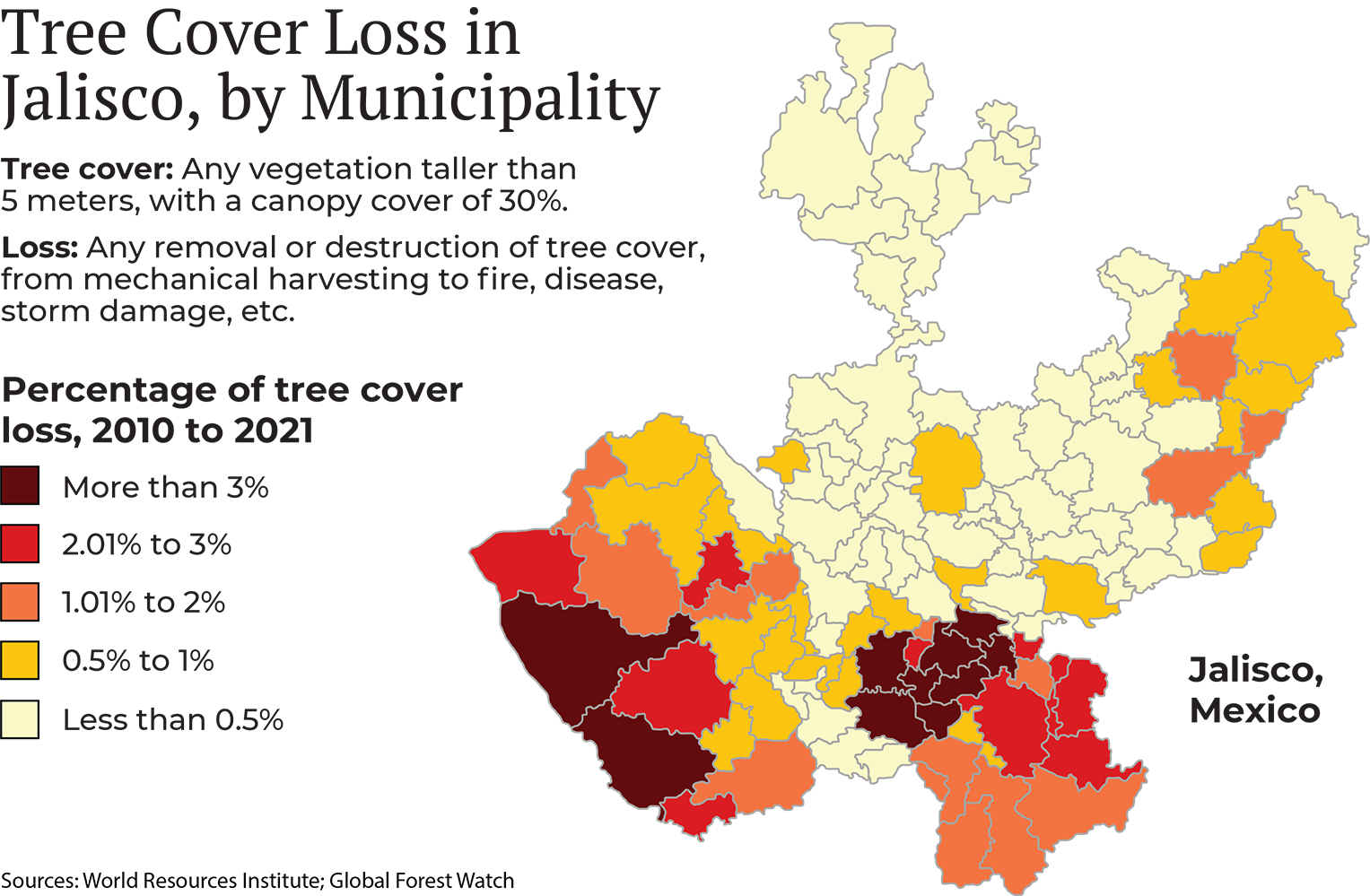 “Ecological agriculture is inextricably linked to the right to healthy food,” says Jaime Morales, an agroecologist and founder of an agroecology training center in Jalisco. The expansion of industrial agriculture — boosted by state and taxpayer money, he says — and the accompanying threat to family-owned small farms is endangering this right in a country where more than 55% of rural households are food insecure.

Locals also point to changing climatic conditions, which they say are a result of changes in land use. Zapotlán el Grande, located in southern Jalisco, among the foothills of Nevado de Colima and near the Sierra del Tigre mountain range, used to be cool and abundantly rainy, García says. Less than a decade ago, maximum temperatures tended to be in the high 20s Celsius; this May, however, temperatures reached 38 degrees Celsius (100 degrees Fahrenheit). Indeed, according to one analysis, Zapotlán el Grande experienced the greatest growth in avocado production between 2009 and 2018 — from 2,400 tons to almost 37,000 tons — and, in the same period, ranked ninth out of 125 Jalisco municipalities in terms of most tree cover lost.

As avocado production in the municipality shot up by 509% between 2010 and 2021, crop diversity plummeted. In 2010, farmers in Zapotlán el Grande grew 39 types of crops, whereas, in 2021, they cultivated just 15 different crops in the area.

“Many medicinal plants are burning up, such as mullein, arnica and sage,” Silva says. Native fruit trees — such as tejocote (Mexican hawthorn), apples, pears, plums, pomegranates, black cherries and blackberries, some wild and some cultivated — are also disappearing, García says. 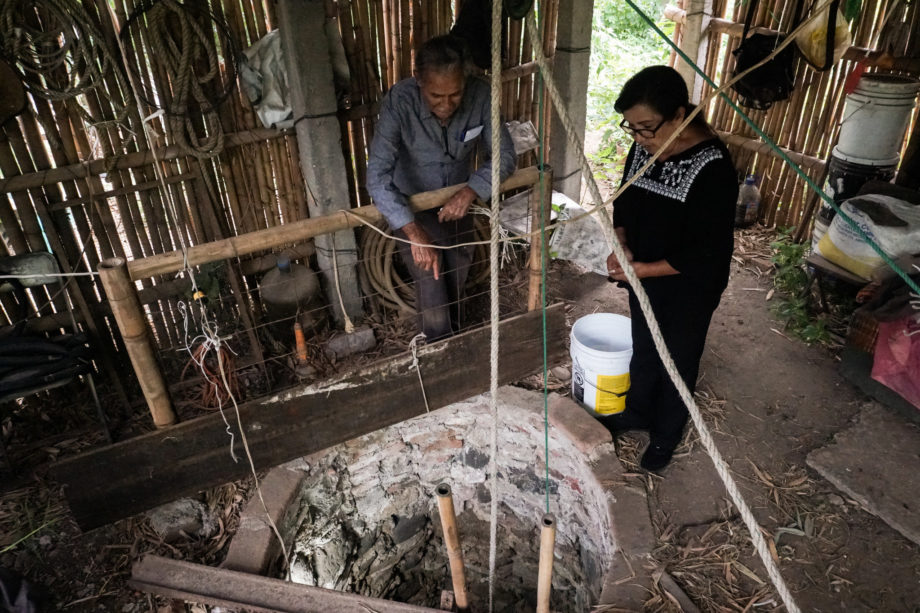 Rogelio Trejo and Yaskara Silva inspect their well, which did not accumulate water for the first time in a century, partly due to increased water consumption by local avocado farms.

In neighboring Michoacán, 30% to 40% of recent deforestation was driven by avocado production, according to Global Forest Watch, an online monitoring tool. In Jalisco, agricultural expansion is the second-greatest cause of deforestation. In both Jalisco and Michoacán, it is illegal to cut down trees to cultivate avocado, but if land is burned, then a change of land use is permitted. Thousands of hectares of trees have been set on fire in the mountains around their ranch, Trejo says. Later, avocado orchards were installed. According to official data, 14% of avocado orchards in the state are on land previously destroyed by fires.

Jalisco’s Ministry of Agriculture and Rural Development did not respond to requests for comment.

Néstor Rodríguez, who grew up in San Gabriel, a municipality within a protected natural area next to Zapotlán el Grande — Parque Nacional Volcán Nevado de Colima, which has the second-highest number of hectares of avocado crops in the state — says he began to see avocado orchards spring up in place of forests six years ago. “I consider it a crime that, out of human voracity or economic interest, they are destroying a forest that took hundreds or thousands of years to develop,” he says. 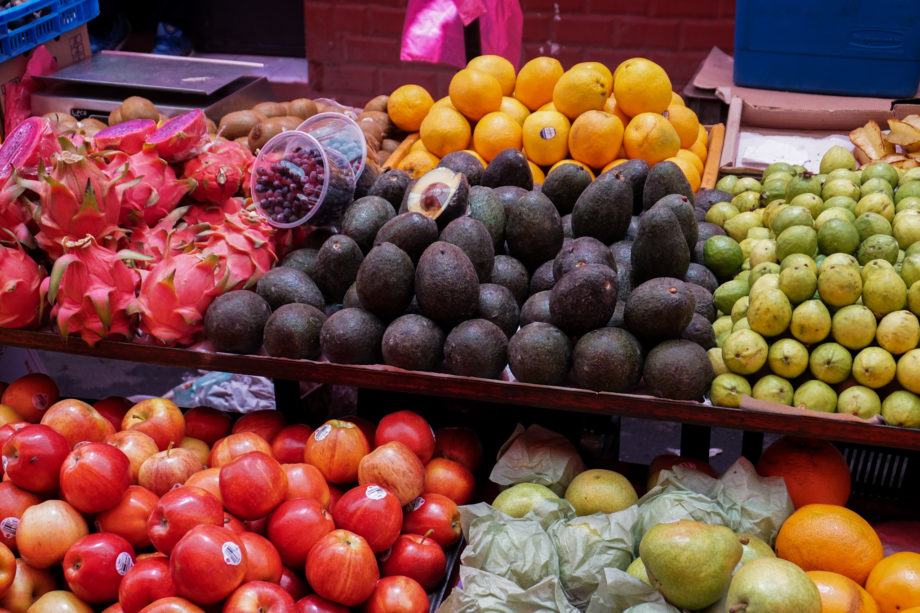 A market displays avocados in Guadalajara, the capital of the state of Jalisco.

One avocado cultivator in Zapotlán el Grande, who wishes to remain anonymous for fear of retribution, says he pivoted to growing the fruit because it is more profitable than corn. (In 2018, the production value per hectare of avocado trees was nearly four times as much as a decade earlier.) “But there is also a big difference in the investment,” he says. As a result, many of the avocado orchards in Jalisco do not belong to small farmers from the state — rather, says Everardo Pérez, director of a development research center, locals rent their land since they cannot afford the necessary inputs. Cultivators from Michoacán began arriving here to plant the fruit around the year 2000, says the anonymous avocado grower. Before that, he adds, there was only one avocado orchard in all of Zapotlán el Grande.

Meanwhile, Silva has a message for avocado aficionados. “I would like us to embark on a silent strike against avocados,” she says. “Because this industry is destroying us.”

Maya Piedra is a Global Press Journal reporter based in Guadalajara, Mexico.