After injuring his eye, one young Mexican football player thought his chances of going professional were over. Now, his time playing in a league with other players who have visual impairments is giving him new purpose as a coach.

MEXICO CITY, MEXICO — The football match in downtown Mexico City starts like any other – with the sharp blast of a whistle. But what happens next is far from usual.

Goalkeepers run their fingers along the top of their goal posts to assess the dimensions as the other players, some with masks covering their eyes, speed after the ball, which rattles as it rolls across the pitch. Several run with their arms in the air to avoid crashing.

A player shouts, “Goalie!” to warn the keeper he’s about to make an attempt on the goal. “Here, here!” the goalkeeper shouts back. Guided only by sounds, the player calculates his shot and kicks the rattling ball towards the back of the net.

This is how they play in the Mexico City Independent Football League for People with Visual Disabilities, an amateur male football tournament. Each team consists of six players, comprising a goalie, who must be blind or wear a mask, and either four blind players and one fully sighted player, or three blind players and a further two with low vision. The players with low vision and those with full sight, known as “seers,” are only allowed to try for a goal after a fully blind player has already scored.

There are currently about 50 players in the competition, says Sergio Soto, president of the league. The league itself dates back to 1967, when students at a local school for people who are blind began to play adapted football there.

Hugo Enrique Campos López, 24, is one of the youngest players in the competition. He plays for Barcelona, a team named for the world-famous Spanish football franchise, which has been renamed América, after one of Mexico’s well-known clubs. His movements on the field are agile and his skill with the ball is notable. He has an advantage over the rest, not just because he is only partially blind, but also because he has played football since he was a child.

Campos López wanted to be a professional football player, but while exercising at home in April 2015, a resistance band snapped back and hit him in the face, detaching the cornea and retina of his right eye. After the accident, he says, he could not find a conventional football team that would accept him. So now, he’s getting used to playing the adapted form of the game.

“When I play football for the blind, it’s like you’re in the dark,” he says. “I imagine colorful lines in my mind. For example, if someone comes, I imagine a line that I’m going to go around, like it’s a tree and I am going to get around.” 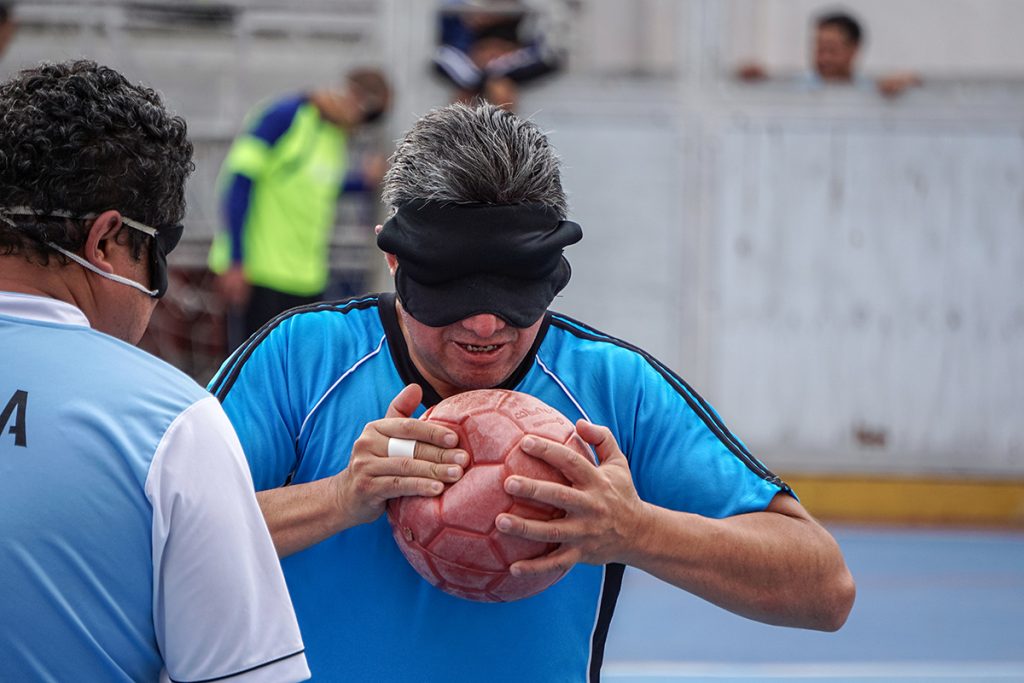 Alejandro Morales Fuentes, 47, a player in the Mexico City Independent Football League for People with Visual Disabilities, pushes the plastic ball they play with back into shape. In this adapted form of the world game, players are guided by the rattling of the ball as it moves around the pitch. 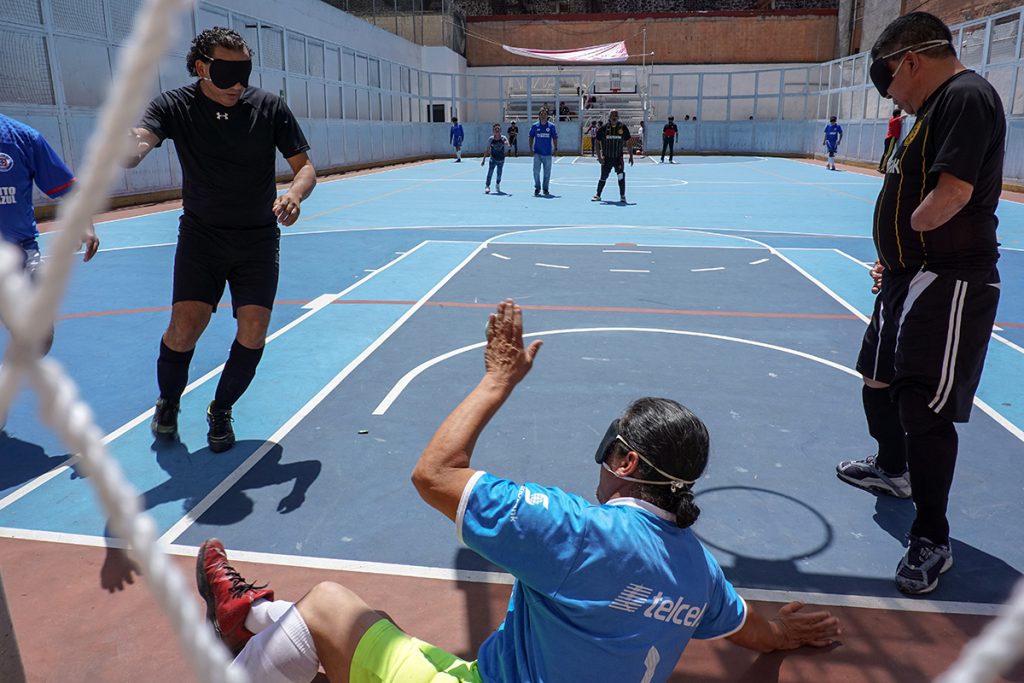 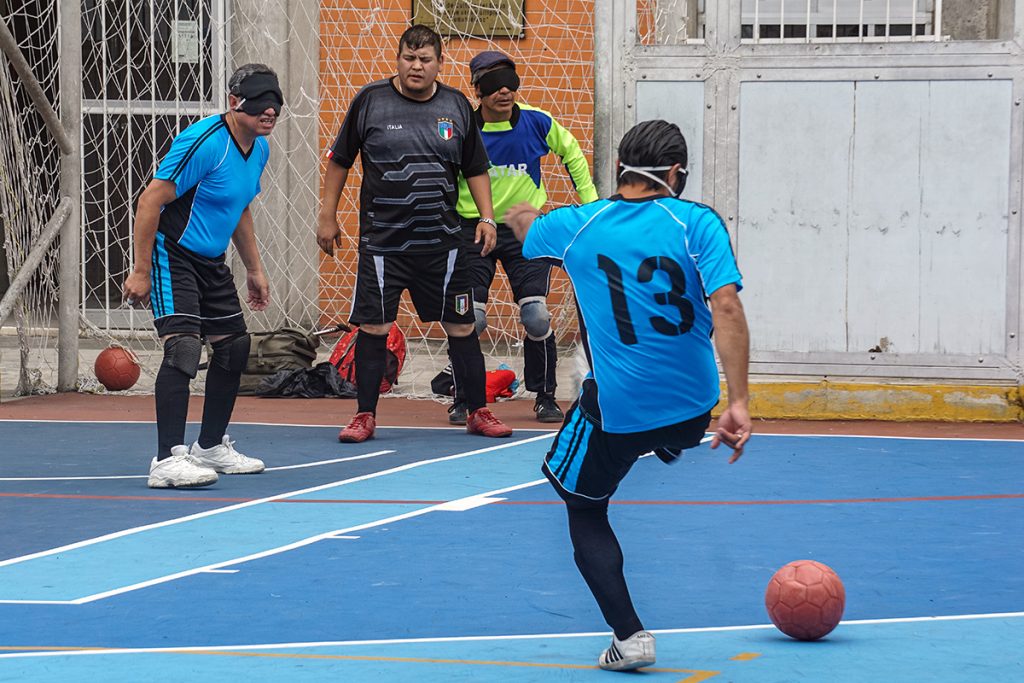 Falls and crashes are common during games. Goalkeepers are usually most at risk, as they throw themselves to the ground to try to save the ball when they hear the players approach. Cristian Arias makes an attempt on the goal as some of the other players stand by. Players have only the sound of the ball and the shouted instructions of sighted players to guide them as they try to score. 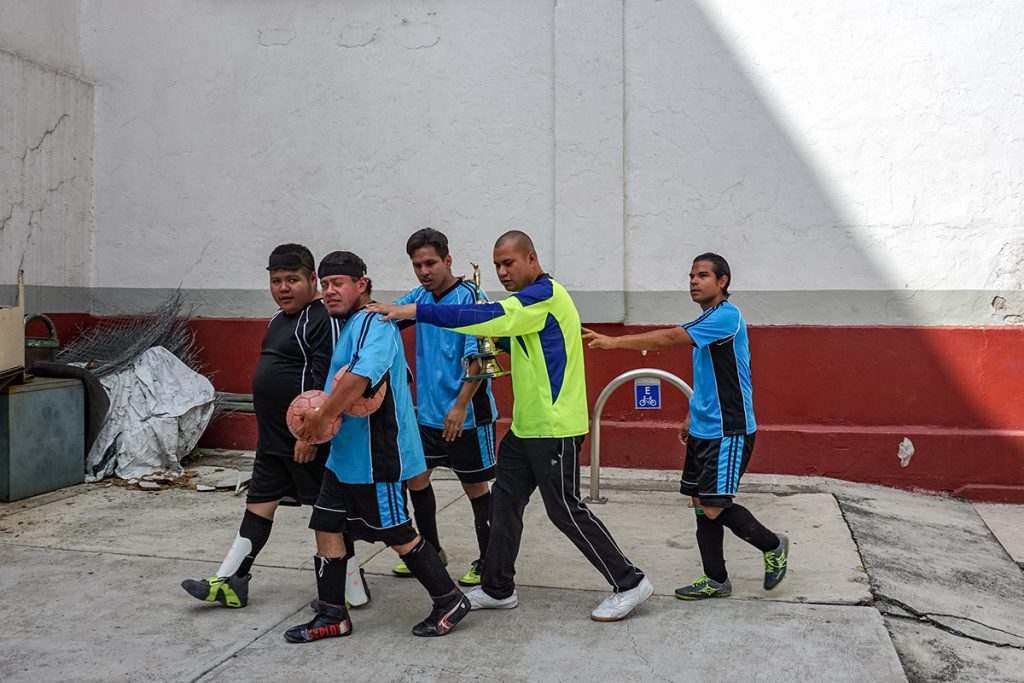 Players from team Barcelona, now known as team América, walk towards the stands at the end of their match. Sighted or partially sighted players help players who are totally blind reach the exit by offering their shoulders as a guide. 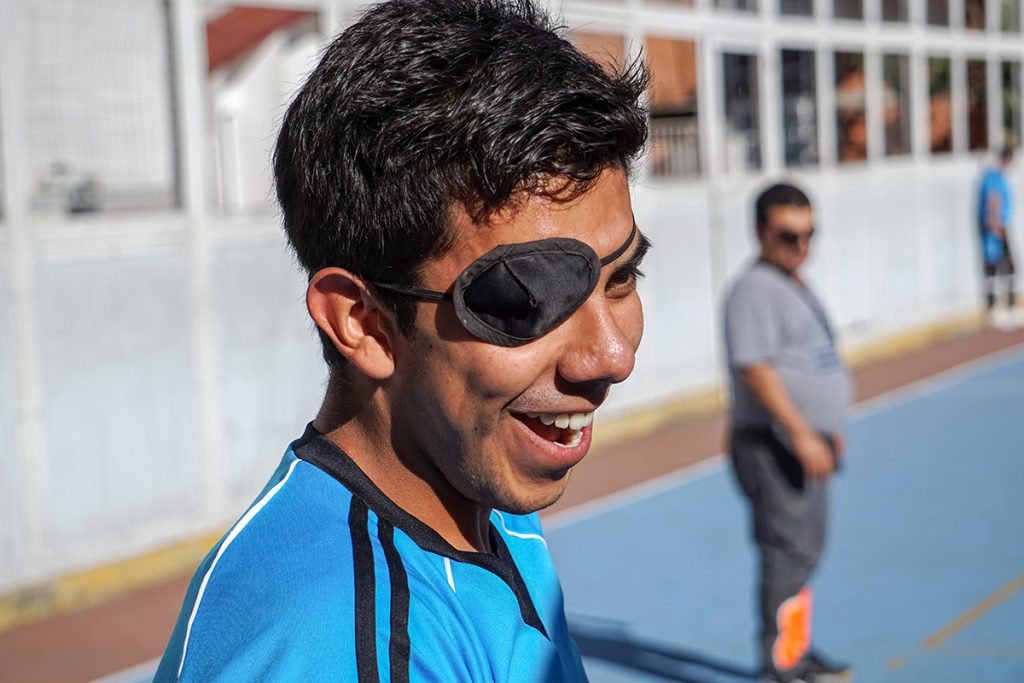 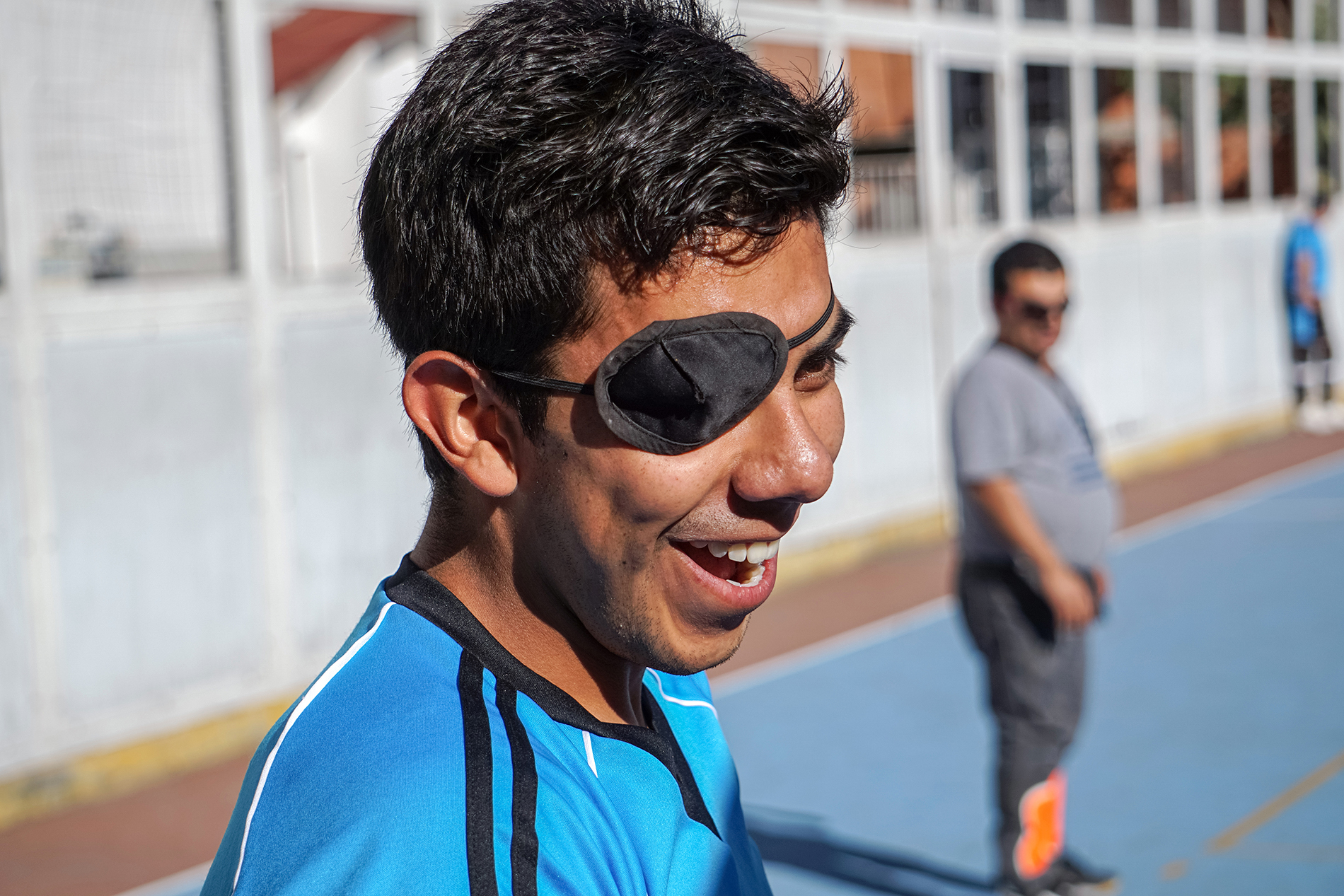 Campos López, 24, has played in the league since August 2018. He began to play football seriously at eight years old and was in preparation to go professional when he lost vision in his right eye during resistance training. After spending a year at home in recovery, Campos López tried to return to training, but he could not find a team that would accept him because of his vision problem. “It affected them – I don’t know – but they didn’t let me do what I wanted to go back to doing,” he says. 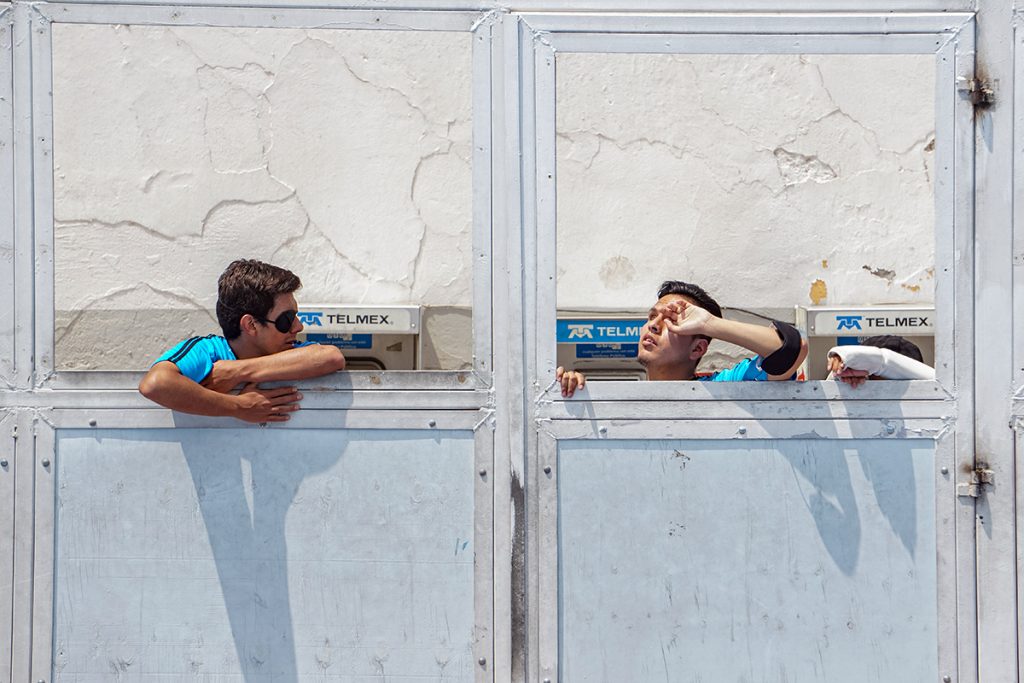 Campos López (left) jokes with his teammate, Miguel Carmona, 20. Previously an extrovert who liked to go out and have fun with his friends, Campos López says he has become more serious since his accident, and no longer feels comfortable going to parties. He says many of his friends distanced themselves from him during his prolonged recovery, and now, most people he relates to also have a vision impairment. 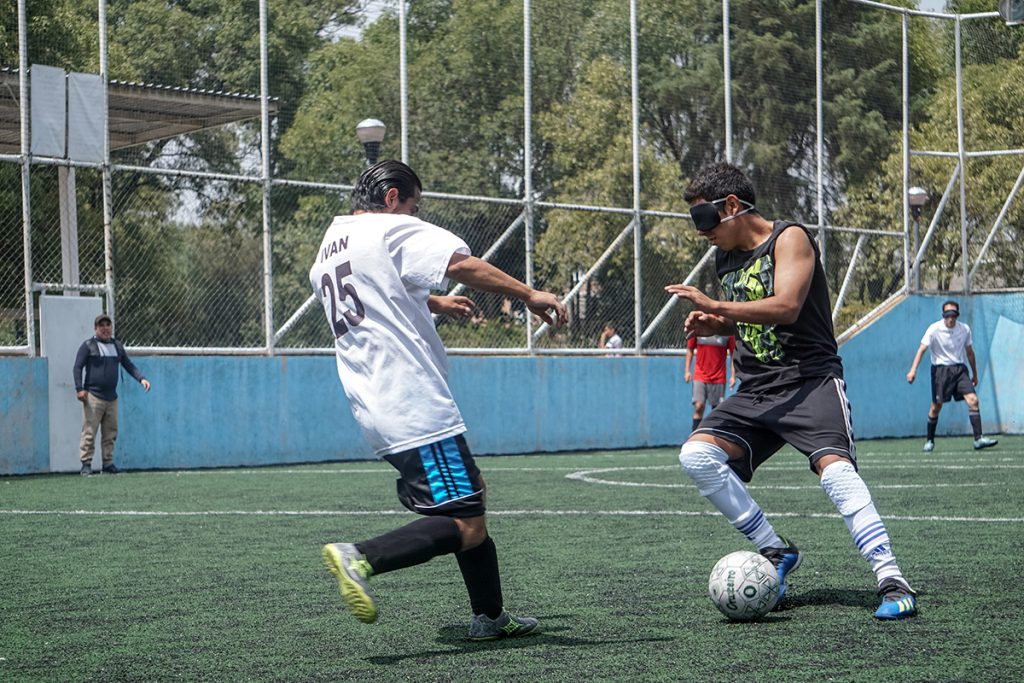 Campos López used to play in another league for people with visual disabilities. In this competition, they play by the rules of Fútbol-5, the professional version of the adapted game which is played at the Paralympics. Campos López says it’s more difficult than the other adapted game he plays. “You don’t know if a player is going to run into you or if the wall is there or something, and, yes, that’s a little scary, but you start to get over it,” he says.

In the Mexico City Independent Football League for People with Visual Disabilities, play is open to players who are sighted, partially sighted and totally blind. They shout warnings to each other when making attempts on the goal and to help orient themselves to the location of the ball.

The ball makes a rattling noise as it is kicked around, different from the ball used in Fútbol-5, which makes a noise, but is more like the synthetic leather ball used in conventional football. Campos López says he finds Fútbol-5 more difficult because all the players are completely blind or wearing full masks. He says the most complicated part of playing Fútbol-5 was learning how to locate the ball and players using only sound. However, he says playing Fútbol-5 helped him develop his hearing and sense of direction, skills that are very useful given his limited field of vision. 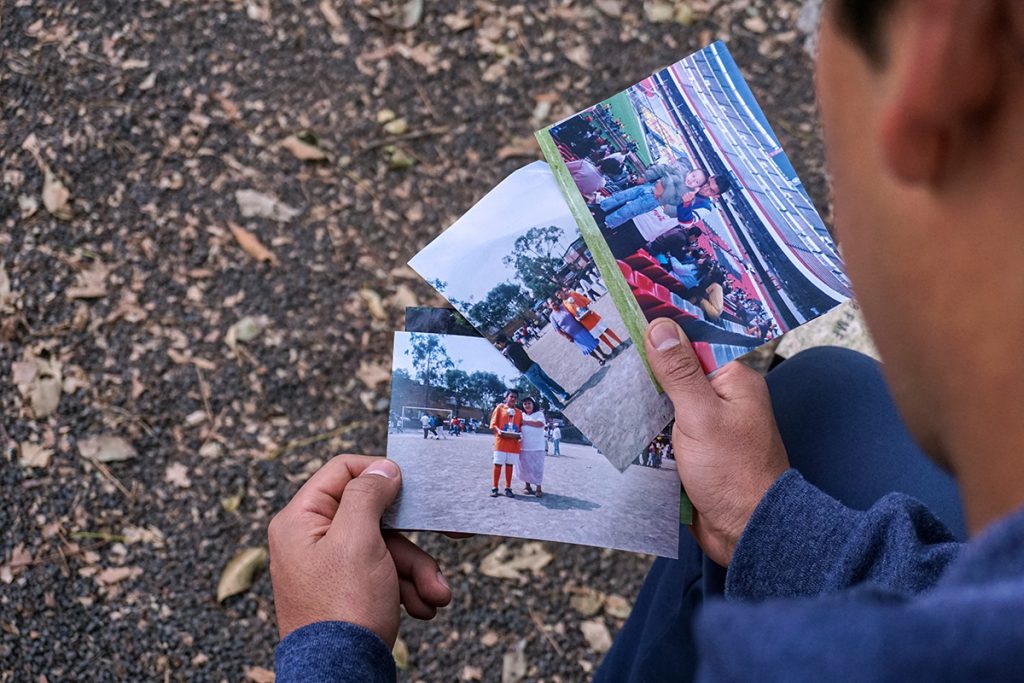 Campos López displays photos of himself with his mother, grandmother and nephew, taken during his adolescence. Campos López began to play football when he was eight years old, at a cousin’s invitation. He trained at specialist schools with the aim of becoming a professional player. As an only child to a working single mother, he spent his training years accompanied by his grandmother. “I liked the finals because my mom went to the games,” he says. “It was there when I saw her more.” 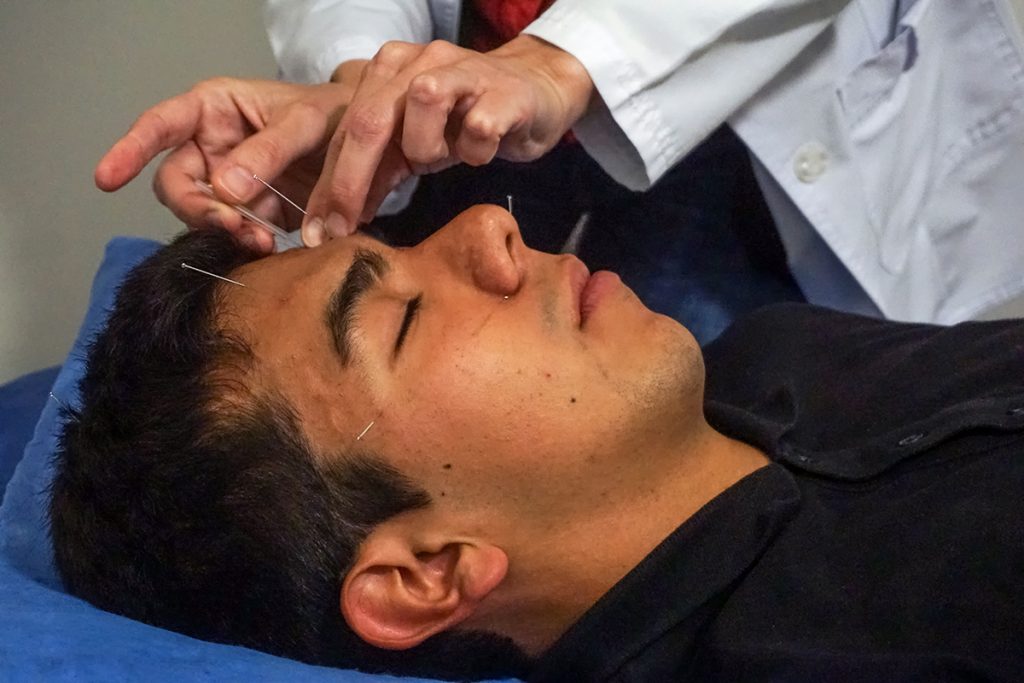 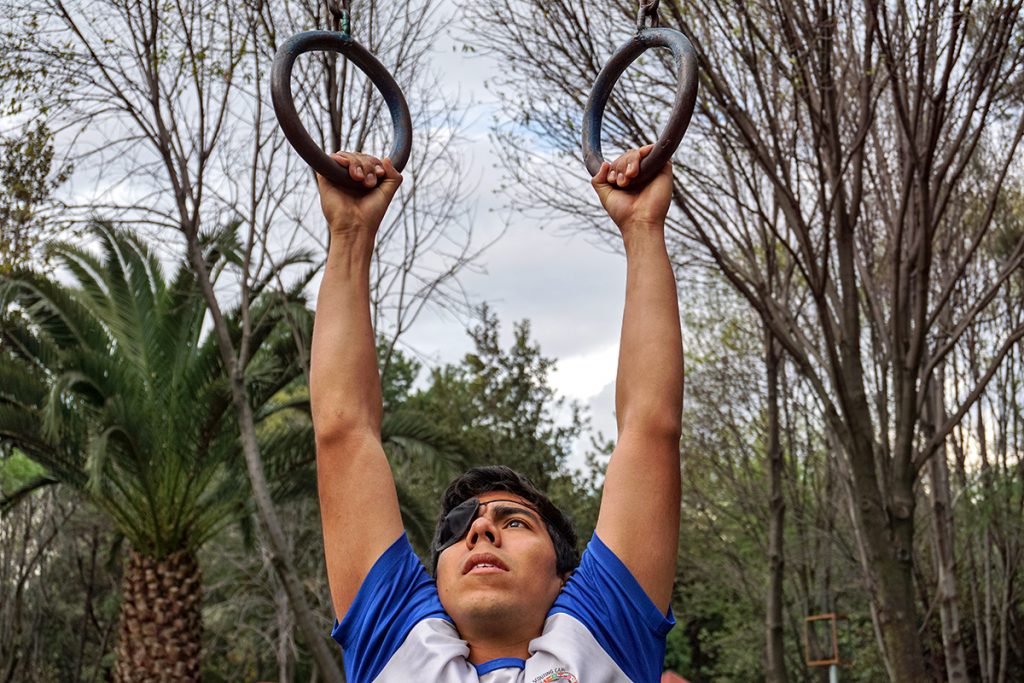 Campos López receives treatment from an ophthalmologist for his injury, but he also regularly sees an acupuncturist. At first, he says, the pain was so bad that he could not even look up, and he was very sensitive to light. But now he’s doing much better and doesn’t need to seek treatment as often.
After his professional football career faltered, Campos López tried attending college. In September 2018, he signed up for a degree in biomedical engineering with the intention of researching a cure for his vision loss, he says. But long sessions looking at a projector and hours reading on a computer were too much effort for his good eye, and he left school after a month. For a while, with little else to do, he spent afternoons exercising in a park near his house. “Yes, I had a moment of frustration because I said: ‘I am no longer doing what I dreamed of doing. So, what do I dedicate myself to? What do I do?’” he says. “I want to dream again, I want that motivation.” 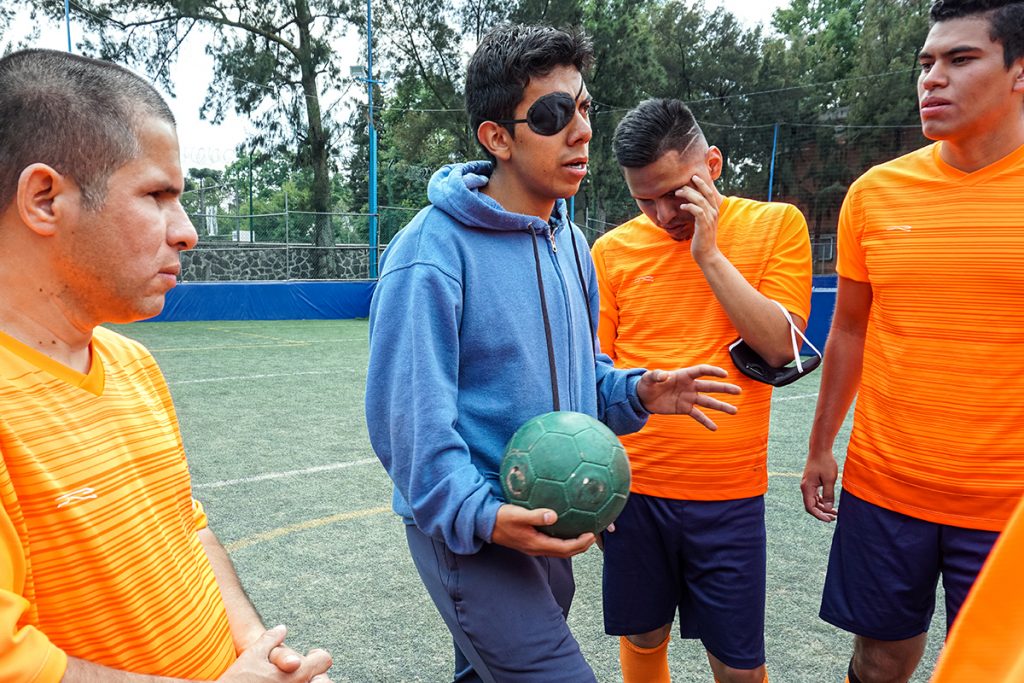 But recently, it seems that Campos López has begun to find answers about what to do with his future. At the end of last year, the Fútbol-5 team he trained with had internal changes that led to the formation of a new team, called the Blind Football Team, with Campos López as coach. Since taking on his new role in January, Campos López has dedicated himself to finding a suitable place to train, seeking the backing of a professional football team, and promoting his work. As a coach, Campos López uses similar techniques to those he learned when he was training to be a professional football player, but he says he has to adapt them to account for the visual disabilities of his players. Campos López says he never imagined that he would end up training a team of people who are blind and visually impaired, but for now, his only plan is to help the team move forward.

Correction: This story has been updated to identify the correct game being played in the video. Global Press Journal regrets the error.