Skip to main content
The story you are reading was published on Tuesday May 14, 2013. To read more recent stories click here. 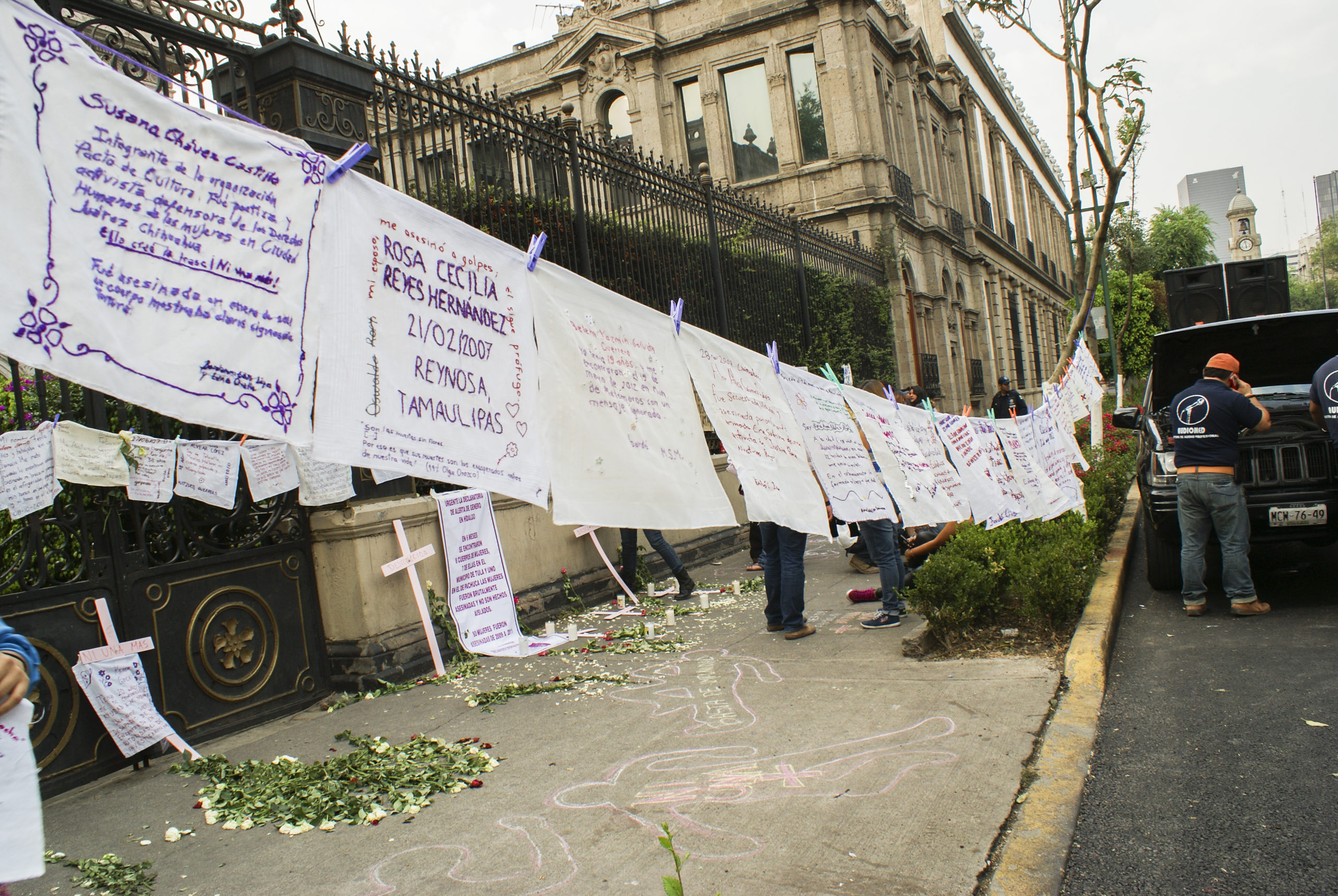 Part 1 in a Series

Shaping Their Future: Women in Mexico Seek Empowerment Through Crafts

MEXICO CITY, MEXICO – Edith López inserts her sewing needle into a white cloth in Mexico City, Mexico’s capital. Stitch-by-stitch, she embroiders the story of Gloria, a woman whose husband doused her with flammable solvent, then set her on fire. He tried to burn her to death because she tried to separate from him.

She is embroidering Gloria’s story as part of Bordamos Feminicidios, a collective of mostly women who embroider the stories of women who were assaulted and slain because of their gender. The group’s name translates from Spanish to “We Embroider Feminicides.”

Although Gloria survived the assault, the group included her case as a way to raise awareness about gender-based killings. The embroiderers also connect with their subjects’ stories through the craft.

The first embroidery López did with the group included an extra link. A lawyer, she stitched the story of a case she had litigated involving three young women whose bodies had been found in a cotton field in Ciudad Juárez, a city in northern Mexico.

Feminicide in Mexico first caught national and international attention during the killings that occurred during the 1990s in Ciudad Juárez in the state of Chihuahua.

Bordamos Feminicidios uses embroidery to provide a voice to women who were killed and to change society’s perception of these women as weak. The detailed craft also enables embroiderers to connect with the women and sensitizes them to the violence they suffered.

Mexican law defines feminicide violence as an extreme form of gender-based violence against women. It considers it the product of human rights violations in the private and public spheres and the combination of misogynist conduct and social and state impunity. It could result in homicide or other forms of violent deaths.

While the term “femicide” comes from the female equivalent of homicide, “feminicide” is a wider definition that encompasses the multiple forms of death that could occur, according to a 2012 national study by the Comisión Nacional para Prevenir y Erradicar la Violencia contra las Mujeres, a commission that aims to prevent and eradicate violence against women under the Secretaría de Gobernación, Mexico’s interior ministry.

Between 1985 and 2009, more than 34,000 women were killed because of their gender in Mexico, according to the commission’s study. It notes that feminicides have increased since 2007 because of the social violence that has accompanied the “war” on drug cartels waged by the previous administration of Felipe Calderón, who served as president from 2006 to 2012.

Minerva Valenzuela says she began the embroidery group in November 2012. She drew inspiration from a similar project called Bordamos por la Paz, in which relatives of people who were killed or who disappeared during the Calderón administration met in public places to embroider handkerchiefs with the stories of the casualties of the drug offensive.

Bordamos Feminicidios has embroidered about 350 handkerchiefs so far, says Valenzuela, who has personally stitched seven stories.

“I was totally mutilated and packed in a suitcase,” reads one of the cloths, telling the story of a woman who had been a sex worker.

Valenzuela, a cabaret actress who defines herself as an independent feminist, sits on the sidewalk in front of the Secretaría de Gobernación in Mexico City on April 18. Citizens are demonstrating to demand an investigation into the killings of women in the states of Hidalgo and Guanajuato. Valenzuela is embroidering one of the cases.

The group embroiders cases documented by the Observatoria Ciudadano Nacional del Feminicidio, a civil association that monitors and registers information on feminicides. The embroiderers carry out their project at various demonstrations against feminicide in the capital as well at other women’s rights events.

The mostly female participants are diverse in age and profession. They meet spontaneously, deciding when and where to convene through Facebook. They say they join the group because of an interest in gender-based violence or a passion for embroidery.

During the public demonstrations and events, they hang the handkerchiefs or cloths with the stories they have embroidered on makeshift clotheslines so passersby can read them.

“I was only 30 years old and had a world to discover,” reads the story of Teresa García Rosas. “My partner shot me in the face on June 26, 2007, in Jalisco. He returned days before from the U.S.A. to end my life.”

The embroiderers stitch the women’s stories in the first person in order to give them a voice and to portray them as strong. This gives them life, Valenzuela says.

It also aims to change the perception of feminicides in Mexico, she says. It contrasts with the usual image of someone killed in gender-based violence as a suffering or dead woman, which conveys weakness.

The embroiderers also stitch the stories in the first person so they can identify with the woman to whom they are returning a voice, Valenzuela says. This link sensitizes the embroiderers to the violence the women suffered.

Judith Flores, a participant in the group, says the embroiderers connect with the women while stitching their stories onto the cloths.

The act of embroidery generates a link because it is a task that requires time and concentration, Valenzuela says.

“That makes the woman whom you are embroidering stay with you in many parts of your life,” she says.

And not only women participate in the collective. Freddy Bautista says that addressing the issue of feminicides is the responsibility of all citizens, of the country.

“It would have to be an issue that concerns us all,” he says.