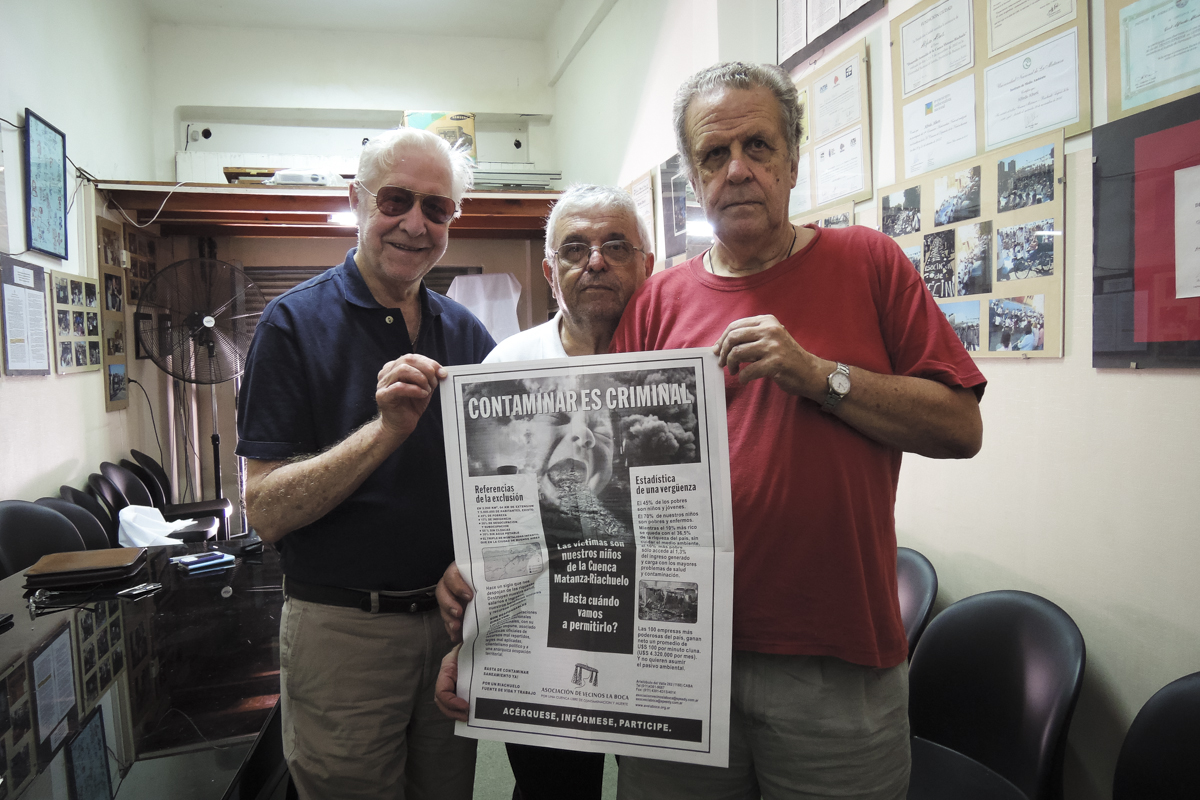 BUENOS AIRES, ARGENTINA – When a receptionist in a local government health center asks Ramón Vicente Acuña which doctor he needs to see, he wordlessly rolls up his pant legs to reveal flaky, purple skin.

Acuña moved to this neighborhood, known as Villa Inflamable, about a year ago. His home is on the bank of the Matanza-Riachuelo river basin. After four months of living here, the 54-year-old says his skin turned red and he developed a rash that produced pus. He never wades in the water, but, like many local people, he does drink water from a nearby well. Doctors told him that the rash is an allergic reaction, most likely from pollution in the river.

INSIDE THE STORY: A story about pollution in a river was reported, written and completed, but one key interview was still missing. It soon became clear that the whole story rested around that one interview, which took months to get. Read more.

Acuña isn’t the only one grappling with these symptoms. He says he continues to meet more people who have the same skin reactions. And in his weekly medical visits, which he makes in hopes he’ll find a solution, he sees other people with different problems he attributes to the river’s pollution. Children and the elderly are experiencing skin problems, vomiting, diarrhea and headaches, he says.

“Here, everybody is sick,” he says. “It’s a time bomb. If I could go live somewhere else, I’d go quickly.”

People who live in the communities surrounding the river basin have known about the pollution for as many as 70 years, says Antonio Parodi, a member of the Asociación de Vecinos La Boca, a neighborhood association in La Boca, which borders the river basin. Association members monitor health issues related to the pollution. 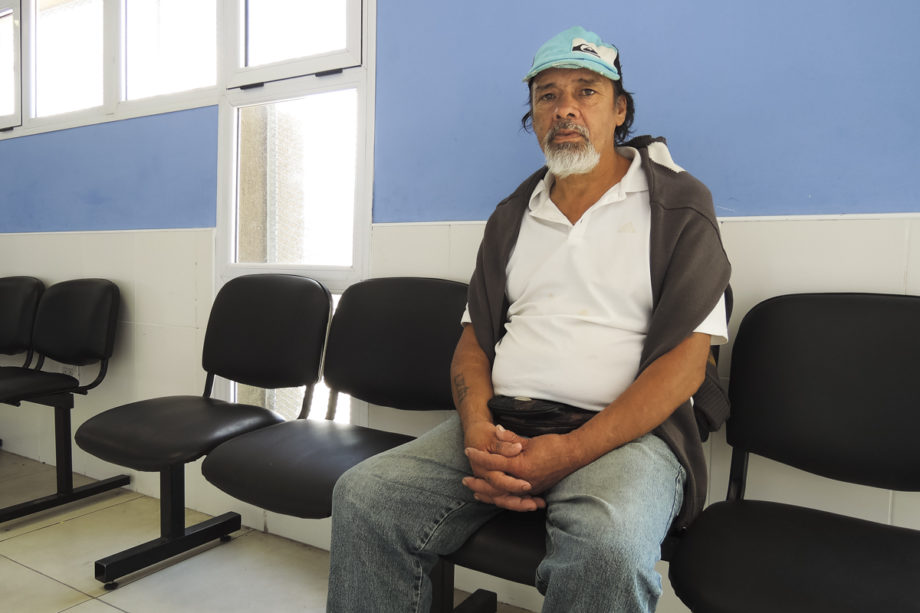 Ramón Vicente Acuña visits the local government health center every week. Since moving to a neighborhood that lies along the Matanza-Riachuelo river basin in Buenos Aires, Argentina’s capital, he has developed a rash on his legs.

But there have been years of government inaction, Parodi and other activists say. Many people say they hoped the election of President Mauricio Macri would bring change, but it was months after Macri took office before a director was appointed to the Autoridad de Cuenca Matanza Riachuelo (ACUMAR), the government entity in charge of monitoring the basin.

ACUMAR is facing demands from the association and residents to clean up the approximately 70-kilometer (43 miles) long Matanza-Riachuelo river basin to avoid further pollution, as well as relocate families living in the most affected areas. But insiders say the people who live there could get even less support from the government in the future: Mobile health units that provide medical care to people suffering from ailments related to the pollution could be shuttered as soon as May.

The Matanza-Riachuelo river basin is one of the most polluted in the world, according to Greenpeace, a global environmental organization.

An estimated 20,000 businesses are located along the basin, according to 2013 information from Greenpeace.

About 5 million people live around the river basin. Thirty-five percent of those people do not have access to drinking water, while another 55 percent lack sewers, the organization says.

Verónica Odriozola, a biologist formerly with Greenpeace who specializes in environmental health, says industrial contaminants have been found in the basin that are harmful to human health. 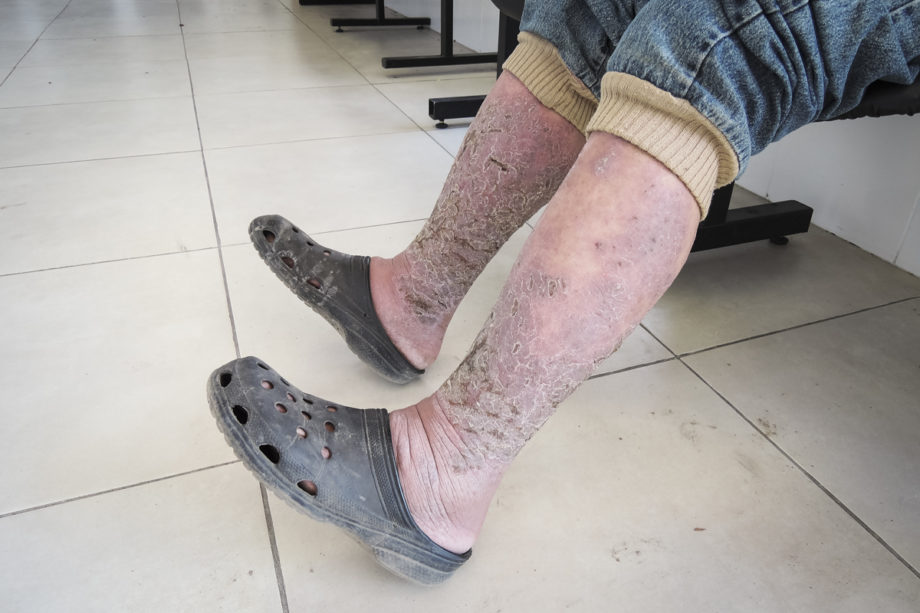 Ramón Vicente Acuña’s legs are purple and flaky, and he and his doctors attribute this to the pollution of the Matanza-Riachuelo river basin. He has been living near the river basin for about a year.

These include hydrocarbon derivatives emitted by refineries, including pesticide residues, chromium, cyanide, lead, mercury and other heavy metals which can cause skin and respiratory problems, she says. Odriozola served as the coordinator of Greenpeace’s campaigns against toxics and contamination, and authored and worked on several reports on the river basin’s pollution during her 15 years with the organization.

“One lives over a mix of garbage and chemical waste that can not only contaminate the groundwater, but also emit toxic gases,” she says in a phone interview. “The kids play with their hands in the ground, on the floor, and they get contaminated.”.

Parodi says he remembers a time when people could swim in the river.

“Then big ships began to arrive, and the water was filled with petroleum. You’d go in to swim and would come out with the legs black with petroleum,” he says.

Life changed soon after that, he says.

In 2008, Argentina’s supreme court issued a ruling mandating the federal government and the governments of the province and city of Buenos Aires clean up the river basin, and implement an environmental impact and sanitation plan.

Here, everybody is sick. It’s a time bomb. If I could go live somewhere else, I’d go quickly. Ramón Vicente Acuña, who has a rash doctors say is caused by pollution in the Matanza-Riachuelo river basin

This plan was published by ACUMAR in 2010. The plan states that, in addition to addressing environmental concerns, their tasks include the reconstruction and improvement of housing, and relocation of families living in affected areas in accordance with a 2006 government agreement. The plan lists over 30 neighborhoods, including Villa Inflamable.

But residents of Villa Inflamable have not yet been relocated, says resident Luzmila Ramos, who lives near the river’s bank.

“When we got to the neighborhood and started to drink the tap water, the taste was bad. We spent two months with diarrhea,” says Ramos while waiting for the doctor at the local government health center. “We had to start drinking bottled water. Now we’ve gone back to tap water, but we try to drink it as little as possible. I’m afraid to use that water.”

Ramos says her children, ages 12 and 15, have had rashes and hives on their skin.

“Supposedly they were going to get us out of the neighborhood, but so far they have never called us,” Bayón says. “If they gave me the opportunity to move, I’d go without thinking about it.”

She also can’t stand the river basin’s strong smell during the summer.

“At night, it seems to be worse. The smell comes, your eyes and throat burn,” Bayón says. “And when you get up, you see over the cars that there is like a black mist.”

She says she still expects to be relocated.

He says he’s linked respiratory illnesses, skin afflictions and problems with the digestive system to the river’s pollution. Since these illnesses develop quickly, it has been easy to detect illnesses in people who recently move to the affected area.

“Bronchiolitis in infants, asthma, COPD and pulmonary fibrosis occur very frequently in the basin because they are areas with a lot of pollution,” he says.

Galeano says the mobile unit also sees cancer patients, but doctors haven’t connected the cancer to the river’s pollution because it is a slowly-evolving disease. 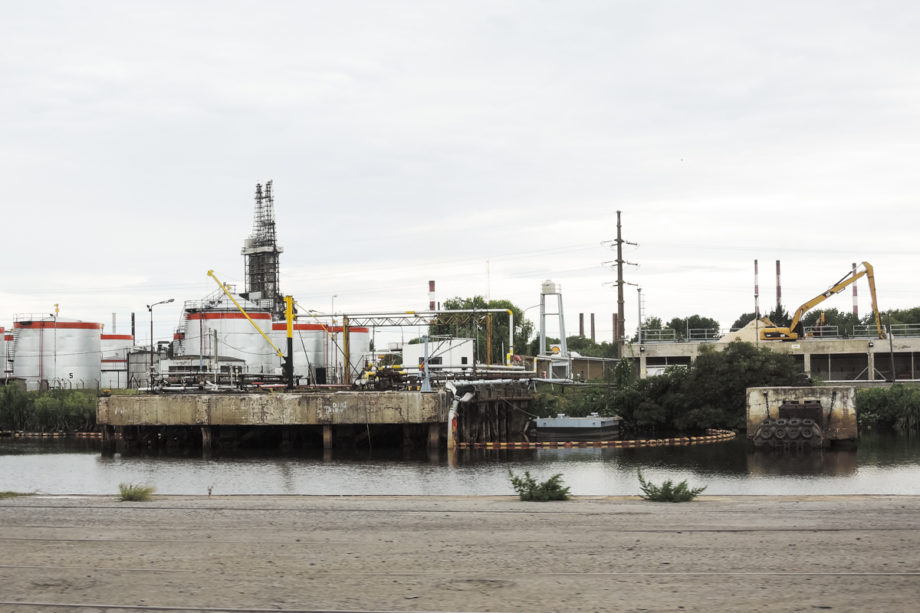 Many corporations and industries are located along the Matanza-Riachuelo river basin. Locals and experts believe that waste from the industries is contaminating the river, which have caused health problems for people who live nearby.

But it’s not clear whether those people will continue to receive medical care from the mobile units, which provided intermittent care this year. They stopped operating mid-February and didn’t open up again until mid-March, Galeano says. He has received informal communication that the new government may not continue the mobile health unit service beyond May.

Now, only two out of the previously 12 units are in operation, he says, and they only focus on dengue cases.

ACUMAR has overestimated its scope of action in the past, says Hernán Seoane, the organization’s newly appointed environmental health director. This direction led to ACUMAR exhausting resources in various other projects, such as as ophthalmological diagnostics, when they should have been focusing on the river basin’s pollution, he says.

“ACUMAR must return to its primary roles and functions, concentrating ourselves in that which concerns the pollution,” Seoane says.

This focus will include evaluating the mobile health units, he says.

They will continue working at least until the end of May, Seoane says. A specific decision has not been made as to whether they will completely elminate this program, but they will finalize a decision during this period.

But Seoane believes that health care for residents should be provided elsewhere.

“ACUMAR cannot assume the reponsibility of taking over the health care of a family over time,” he says. “We have to transfer the responsibility.”

Seoane says he cannot speak about efforts to combat the river basin’s pollution.

Supposedly they were going to get us out of the neighborhood, but so far they have never called us. If they gave me the opportunity to move, I’d go without thinking about it. Noemí Isabel Bayón, a local resident

In the past, local people have found ways around government inaction. The Fundación Ambiente y Recursos Naturales (FARN), an organization that promotes development through policy in various environment issues, built a website to galvanize people around the issue of the river basin’s pollution. The website, called “Qué pasa, Riachuelo?” which translates to “What’s up, Riachuelo?” provides access to information about the basin, allows users to send in a request on the sanitation status and report a contaminated area, landfill or polluting source.

The website has documented 1,073 declared industrial polluting agents, 83 remaining landfills and 280 settlements in the basin, according to its organizers.

Eduardo Abascal, a member of FARN who works directly on the website, says the website’s database also uses information sourced from ACUMAR. He says he felt progress was being made with the previous administration, because ACUMAR authorities as recently as December responded quickly to their requests for information for the website.

But they have not had a meeting with authorities for six months, he says. The previous government stopped having meetings with them shortly before the elections, he adds.

“We had hope,” says 70-year-old Alberti. “But we’ve now spent three months with a lame ACUMAR.”

For now, the association will continue moving forward in any way they can, Alberti says.

“The meetings allow us to do a follow up on ACUMAR’s work,” he says. “The longer that is waited, more people get sick and more people die. We can’t keep waiting.”