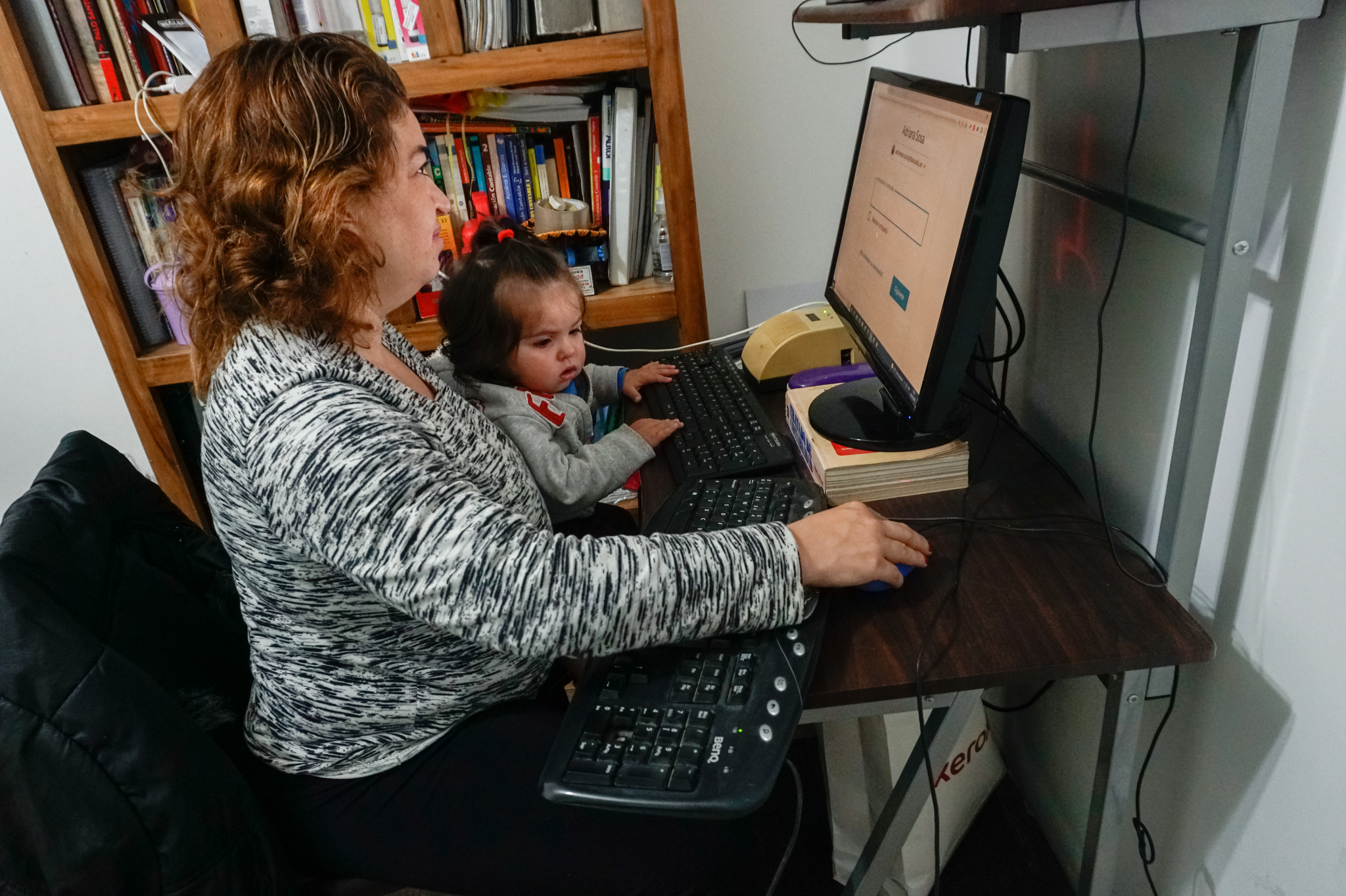 BUENOS AIRES, ARGENTINA — High school teacher Vanesa pacifies her spirited daughter with an old computer keyboard while she marks papers online. One-year-old Itzamara wants to be just like her mom.

Vanesa had planned to return to work after having her daughter, confident there would be a child care place for Itzamara — a legal requirement set out in Buenos Aires’ constitution to provide a free education place from 45 days old. But months after her application, the working mother is still waiting. Vanesa took legal action ordering the city to provide her daughter with a place. While she awaits their response, she has requested that her last name and that of her daughter aren’t used for fear of retribution in the proceedings.

Itzamara is one of more than 3,800 children, from infants to 5-year-olds, awaiting a public education place in Argentina’s capital. The dire situation has been exacerbated by the coronavirus pandemic when more families had to cut back on expenses, one of which was private education, putting even more pressure on public school spots. The shortage has left thousands of children behind in vital early years learning and parents worldwide have had to exit the workforce or reduce their working hours to stay home.

Vanesa, an economics teacher, registered her daughter at the five day care centers closest to her home and workplace in October 2021, ready for the start of the new school year in March. The response was unanimous: “We have no vacancies. She is on the waiting list.” With nowhere to take her daughter while she works, Vanesa relies on family to help and has had to reduce her working hours. That’s led to a 40% pay cut.

The Civil Association for Equality and Justice, a human rights advocacy organization, filed a lawsuit in 2007 against the government of the city of Buenos Aires on behalf of the thousands of children between the ages of 0 and 5 who couldn’t access a day care place. The case was successful and the city’s government was ordered to build enough schools to meet the demand by 2010.

But the government hasn’t complied with the ruling as only 30 schools have been built for early learning, leaving thousands still without a school place, says Francisco Rodríguez Abinal, an attorney and coordinator of a children’s rights program at the organization. 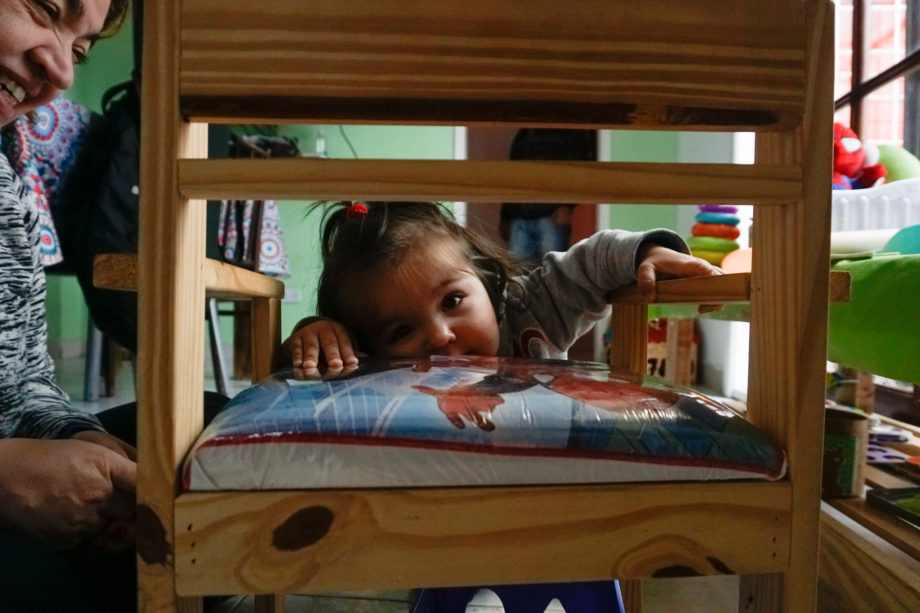 Itzamara, 1, peers through a chair at her home while playing with her mother, Vanesa. While Vanesa teaches economics to high school students, relatives help look after her daughter.

At least 22 more schools are still needed to cover the current waiting list, by Rodríguez’s estimates. However, the last report on upcoming construction projects the association received from the government, as part of the court ruling, included plans to build just one school and expand one room in a preschool, Rodríguez says. “The government should have a construction plan that can cover the slots that are needed,” he says. “The reality is that it is not happening.”

The city’s Ministry of Education didn’t respond to requests for comment.

“It helps to reduce poverty,” Batiuk says. “It lowers the levels of vulnerability and violence in later development. It creates a very beneficial cushion to those who receive it, especially those who belong to populations experiencing social vulnerability; for such children it makes a big difference.” 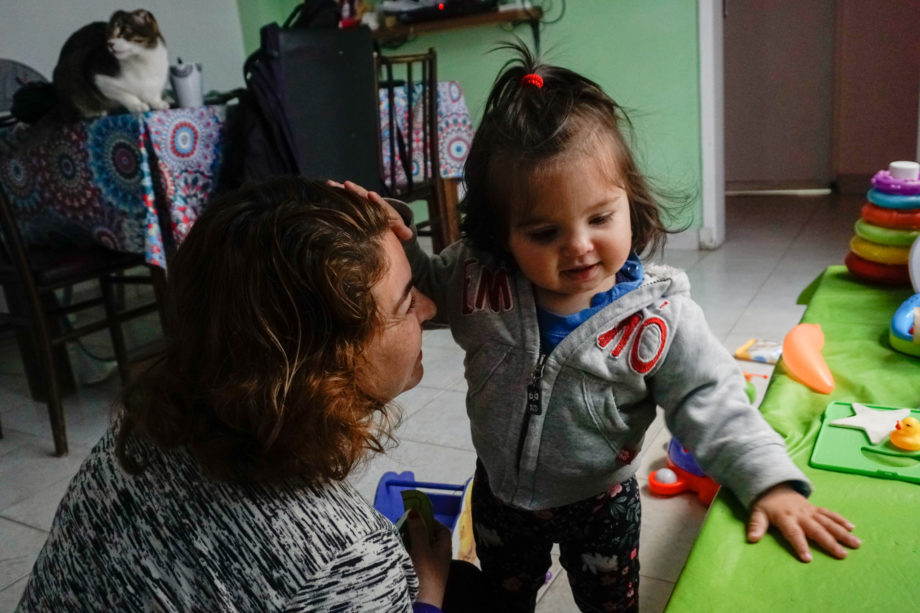 Vanesa has had to cut her hours and take a 40% pay cut so she can look after her 1-year-old daughter, who is still waiting for a day care place months after Vanesa submitted her application.

But it also has a strong impact on the lives of mothers, on whose shoulders the child rearing tasks often fall, says Giselle Furlong Pader, who heads education rights efforts for the Buenos Aires public defender’s office. This judicial agency is tasked with guaranteeing citizens access to justice, including helping families who have not been able to find public day care vacancies.

“When we think about the rights that are at risk due to the vacancy shortage, one of the situations is that of the women who cannot work, cannot go to school, who do not have the possibility of sharing child care with others,” Furlong says.

While Vanesa can rely on relatives to care for her daughter during her workday, the possibility that there may not be a full-time job to return to when Itzamara starts school is a constant concern. 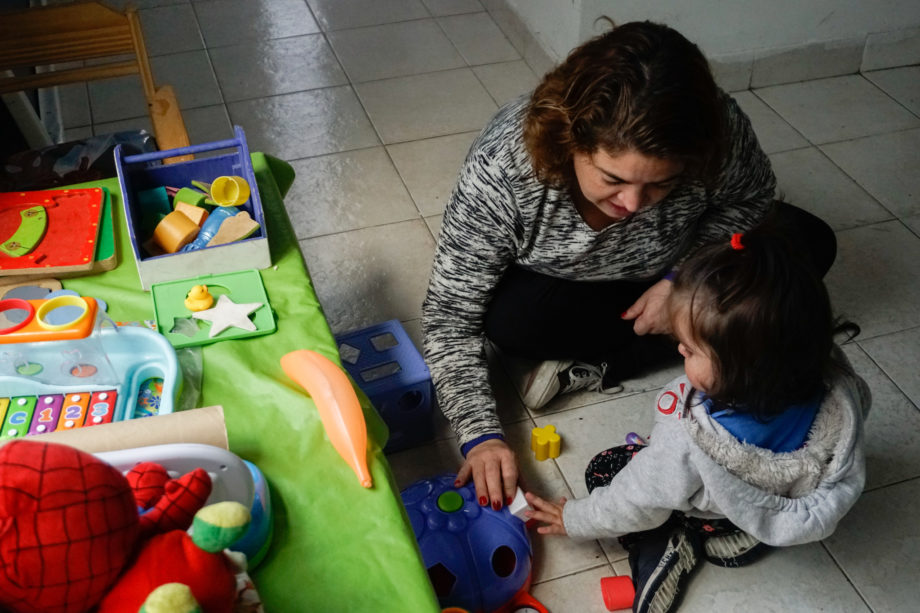 In the absence of a day care place for her daughter, Vanesa has covered a small table in her home with as many educational toys as she can afford.

When faced with a shortage in public education places, an alternative is to pay for a private preschool. But this additional cost is out of reach for many families, even more so during the pandemic.

Private day care centers were hit hard during the pandemic, says María Teresa Rosendo, president of the Asociación Civil Coherencia, which represents private education in Argentina. “The enrollment we had in 2019 could not be recovered; they were absolutely devastated.”

Rosendo estimates that, since 2020, nearly 80 private day care centers have closed in Buenos Aires due to enrollment decreases.

Bárbara Pintor says she was left with no option but to enroll her 1-year-old son in a private day care center after being told there were no openings in the city’s public preschools. But the cost is proving a huge strain on her finances, says Pintor, who works as an administrative assistant.

“I’m paying for the day care center, but I can’t afford it anymore,” Pintor says. “I can’t make ends meet. I’ve been paying a lower amount of my [credit] card bill for three months. I’m going into debt.”

Pintor has also taken legal action against the city to demand a place for her child. She hopes this will force a resolution, since giving up work is not an option for her. Meanwhile, her debt continues to accumulate.