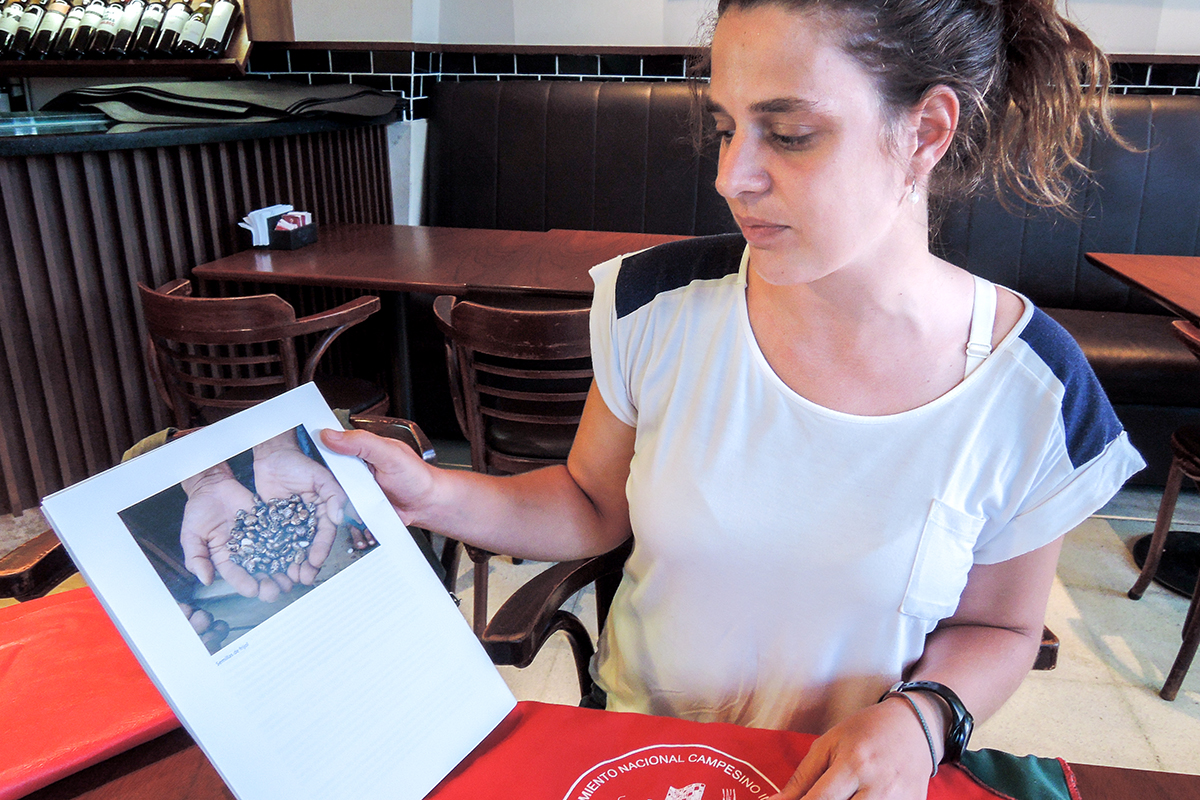 BUENOS AIRES, ARGENTINA — In fields here, farmers once passed down seeds from one generation to the next. The legacy of a family was intertwined with the legacy of its produce, and each generation felt obliged to care for what it grew. They were proud of what they produced.

Then, something changed: People began to believe that native seeds weren’t as good as those purchased.

“There was a lot of campaigning for farmworkers to think that their seeds were bad,” says Verónica Lozano, member of the Movimiento Nacional Campesino Indígena, an organization that seeks to recover indigenous history and values as a foundation for a new society.

That campaigning was done by seed companies and even by the government, Lozano says.

That led to a serious loss of food diversity, she says.

Now, the Argentine government is considering forcing farmers to pay seed companies not just for buying the seeds the first time, but also for using second-generation seeds, which are harvested from crops grown from seeds originally purchased for the first two harvests.

There was a lot of campaigning for farmworkers to think that their seeds were bad.Verónica Lozano, member of the Movimiento Nacional Campesino Indígena, an organization that seeks to recover indigenous history and values as a foundation to build a new society

A bill presented in October to modify Argentina’s existing Ley de Semillas (in English, Seed Law) was a revised draft of a previous proposal, which would have required most farmers to pay royalties on seeds used three harvests after their purchase. Small and medium-scale farmers, who are responsible for an estimated 20 to 30 percent of the country’s production, would be protected from paying royalties after the first year.

A vote on the bill is expected sometime this year.

Lawmakers who support the bill say they aim to foster investments in technology and innovation in seed development, as well as end long-simmering disputes with seed companies — especially Monsanto, the purveyor of nearly all the genetically-modified seeds used in Argentina.

Argentina is the world’s third-largest soybean producer, after the U.S. and Brazil, and, in 2016, tension grew between Monsanto and Argentina’s soybean farmers. The seed company insisted that soybean crops destined for export be inspected to ensure that royalties had been paid, per agreements in which farmers say they were forced to promise that they wouldn’t plant crops from second-generation seeds. Those agreements were required, even though farmers can, under current law, use second-generation seeds at no additional cost.

“When farmers purchase a patented seed variety, they sign an agreement stating that they will grow only the seed they buy from us, and that they won’t save and reutilize seeds that will produce plants that contain the technology patents,” according to a Monsanto statement. The company declined numerous requests made by phone and email for an interview with Global Press Journal.

Argentine officials refused Monsanto’s request, saying that such inspections first had to be approved by the government. Monsanto responded by threatening to curtail its soybean operations in the country.

Lozano, other farmers’ advocates and local food activists say the proposed bill, which appeases Monsanto and other seed companies by allowing them to charge for second-generation seed use, would lead to homogenization in Argentina’s agricultural industry and limit consumer eating choices. Each year’s crop would depend on what a seed company offers for sale, and farmers wouldn’t be able to cultivate seeds over time to adapt to their local microclimates.

But farmers say their rights have already been curtailed in recent years because seed companies require them to sign agreements promising that they won’t grow additional crops from what they produce, says Raimundo Lavignolle, president of the Instituto Nacional de Semillas.

Most of what’s grown in Argentina is grown from seeds the farmers produce themselves, Lavignolle says.

“That equation doesn’t generate an incentive for the production of genetics that the national industry requires,” Lavignolle says. “We are convinced that increasing incentives would bring forth more plant breeding companies.”

Farmers’ suspicions of Monsanto and other seed corporations are rooted in personal experience.

Sergio Bocanera grows soybeans north of Buenos Aires. He’s self-sufficient when it comes to seeds, and he opposes the notion of buying them year over year.

Argentina is the world’s third-largest soybean producer, after the U.S. and Brazil.

Last year, he says, he received an invoice from Monsanto that demanded $450 in royalties. The company had never reached out to him to investigate his operation and there was no explanation of why the invoice was sent. Bocanera took the situation to the Confederaciones Rurales Argentinas, an association of agricultural producers, and Monsanto eventually sent him a credit for the value of the original invoice.

In many cases, people agree that farmers should be protected and seed diversity promoted, but disagree on how that’s best done.

Daniel Pelegrina, vice president of the Sociedad Rural Argentina, says it’s necessary for farmers to give up their right to reproduce from seeds they buy and instead buy seeds to encourage innovation. But the proposed law isn’t the right way to do that, he says.

Instead, he says, seed companies should limit the number of years that a farmer can use seeds produced from that first harvest. When the farmer buys seeds again, he says, he or she will likely find new technology and improved products.

Omar Príncipe, president of the Federación Agraria Argentina, an organization that works with small and medium-scale producers, says the cost of seeds must be controlled.

“Today Monsanto continues to send letters to farmers to pay royalties when they discover that they are using seeds with their genes,” Príncipe explains. “And it’s not true that they only inform big farmers, they have sent letters to cooperatives that represent small and medium-sized farmers.”

Limiting the use of seeds will only concentrate the power of research and development in a few companies. Instead, Príncipe says, the Instituto Nacional de Tecnología Agropecuaria should assume the task of generating innovation and development in seeds to enable the technology to reach the largest number of agricultural producers and not only those with more financial resources.

Representatives of the Federación Agraria Argentina, the Movimiento Nacional Campesino Indígena and other organizations view the limits on personal seed use as a threat to biodiversity that puts food sovereignty at risk.

“If you limit self-use, the farmer ceases to be a breeder. It’s being denied that each farmer, on having replanted the seed, is selecting it and improving it,” Lozano says. “The farmer becomes a mere consumer of seeds.”