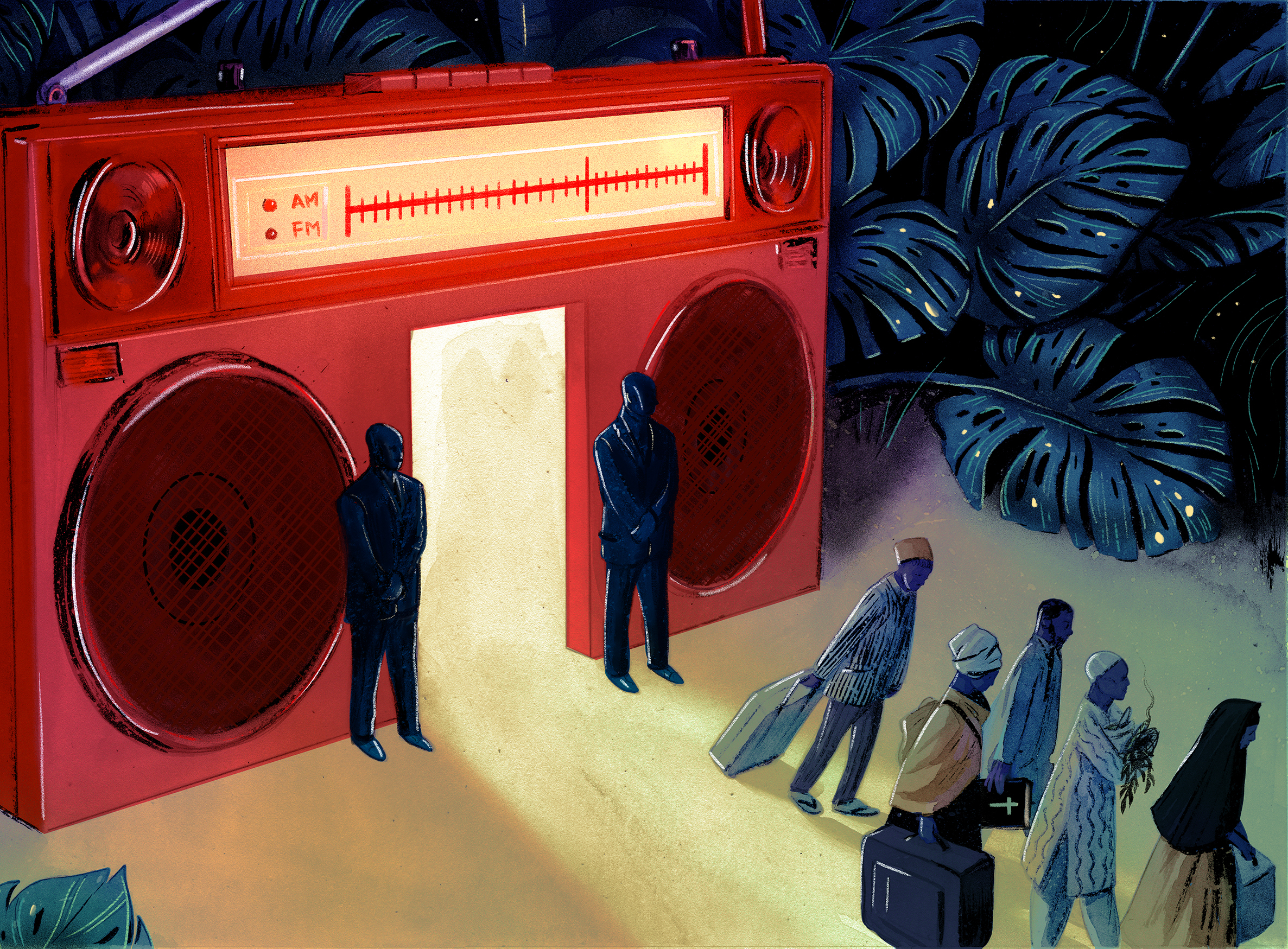 HARARE, ZIMBABWE — Hundreds of people gather in a yard in Cranborne, a suburb of Harare, Zimbabwe’s capital and largest city, waiting to meet Kamwelo Banda. Two women in the crowd excitedly discuss an 30-minute-long radio segment that Banda was featured on weeks ago.

Banda is a traditional healer, originally from Malawi, who’s been touting his services on the local Star FM radio station for some months. But a new law has removed Banda and other faith healers from the airwaves. Banda garnered a large and diverse following of listeners, some in search of cures to terminal illnesses such as HIV/AIDS and cancer, thanks to the weekly radio broadcasts for which he paid.

In April, the Broadcasting Authority of Zimbabwe (BAZ) issued a ban on advertisements and programming sponsored by faith-based healers on local radio and television stations. In a press statement that month, the agency reported that viewers and listeners were worried that some faith leaders were promising the impossible in exchange for money. Health experts and others support the move to regulate programming.

But not everyone has welcomed the ban. It costs hundreds of dollars to run an adv on the radio or sponsor a segment, Banda says. Radio stations are losing revenue because of BAZ’s decision, while critics of the ruling call it a threat to freedom of worship.

To reach and expand his following, Banda hosts healing crusades in his Harare home.

Political instability and the prevalence of deadly diseases such as HIV/AIDS in the sub-Saharan African region have led to a rise in use of traditional medicine and faith-based healing, according to a 2011 study published in The Pan African Medical Journal. Zimbabwe’s shaky economy also drives the demand for such services. Faith-based healing is often an affordable alternative to conventional health care.

The same 2011 study reveals a longstanding tradition among Zimbabwe’s healers: They rely on client referrals, print media and radio to spread their message of faith and healing.

Nearly 85 percent of Zimbabwe’s population are Christians, across a range of denominations. The Zimbabwe National Traditional Healers Association has 55,000 traditional healers in its network, according to estimates that the group gave Global Press in 2017. The number of pastors, prophets and traditional healers who used to sponsor programs and run ads on radio before the ban is unknown.

Patience Zirima, a broadcast media expert, says there were many.

“There was a significant number of faith-healing programs on Star FM and Radio Zimbabwe,” she says of two popular radio stations.

Zirima is the director of Media Monitors, an independent organization that keeps track of and analyzes media trends in Zimbabwe. Advertising and sponsored programming are necessary for generating revenue at commercial radio and TV stations, she says.

The number of churches and faith leaders in Zimbabwe is growing, he says.

“We found that there were a lot of people attending faith-healing churches and we took advantage of that,” he says. Faith-healing shows were good for business, he adds.

While Mbofana didn’t disclose the number of sponsored faith-healing shows and ads that were aired every week on Star FM, Terrence Machipisa, a regular listener, says he heard of many healers through the station.

“In a day, l would hear five to seven prophets advertising,” he says.

Banda was one of those healers. On Tuesdays, Banda says, his sponsored segments would run for up to 30 minutes. Banda’s clients had a chance to share their experiences during this time.

“There is definitely an impact; there is some loss of revenue,” he explains.

Pastors, prophets and traditional healers can no longer sponsor programming or run advertisements on local radio and television stations, after authorities issued a ban in April.

Despite the money that radio stations were making from faith-healing advertisers, there were drawbacks.

Many of the healers who were on radio stations across the country said they could cure incurable diseases, Mbofana says, but he’s always questioned their ability to do so.

“Some of the prophets made outrageous claims that were irresponsible, but we are a responsible broadcaster, so we exercised self-regulation,” he says. “The spirit of the ban was that, let’s be responsible.”

Advertising must have an element of plausibility, says Godwin Phiri, general manager at Skyz Metro FM, a radio station in the country’s second-largest city, Bulawayo.

“I think the ban is reasonable, because some of the content can easily lead to unsuspecting listeners being hoodwinked,” he explains.

While his radio station used to run faith-healing ads, he says it didn’t make much money from it.

For listeners and viewers, the impact is not financial, but it is still hard-hitting.

Mellisa Dube, another regular Star FM listener, feels that the ban is too harsh and prevents people from hearing from faith leaders, even though local media outlets are still allowed to air discussions and debates on faith healing.

Tabani Moyo, director of the Zimbabwe chapter of the Media Institute of Southern Africa, describes the government move as unconstitutional.

“Zimbabwe has freedom of worship and religion enshrined in the constitution,” he explains. “The ban therefore violates people’s right and freedom to worship.”

BAZ may have banned faith-healing ads on local radio and TV stations, but healers from Zimbabwe and other countries still have an audience. The ban does not apply to digital satellite TV channels. According to the Zimbabwe Advertising Research Foundation, satellite channels attract 71 percent of the nation’s viewers.

David Sebata, who lives in Bulawayo, continues to watch faith-healing programs and ads on satellite channels, including Christ TV. He, too, says the ban is unfair to worshippers and those in need of healing.