Skip to main content
The story you are reading was published on Monday February 6, 2017. To read more recent stories click here. 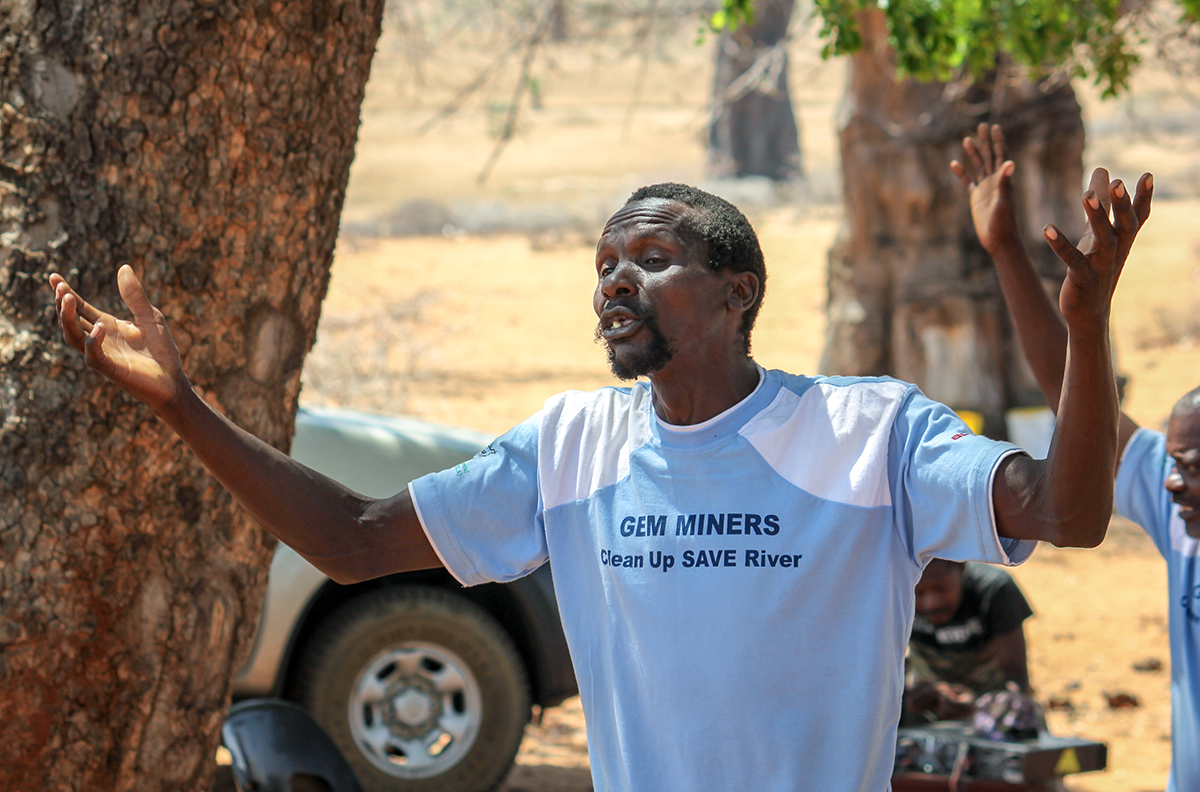 MUTARE, ZIMBABWE — When diamonds were discovered in this dry region in 2006, people here took the gems as a blessing from their ancestors.

But now, more than a decade later, they say the opposite is true.

People are suspicious of local water sources, which they say are poisoned. They’ve lost livestock. Pregnant women have experienced odd symptoms. One 12-year-old boy, Given Nyangani, died in late 2015 after he fell into an open pit left unsecured by a mining company.

And their communities, once peaceful and traditional, now grapple with outside influences from illegal diamond panners who come from all corners of the country.

Local people gained hope in early 2016, when government-backed Zimbabwe Consolidated Diamond Company (ZCDC) moved to consolidate the claims of companies operating in the area, including those held by Mbada Diamonds, Anjin, Gye Nyame, Marange Resources and Diamond Mining Company. They felt the consolidation might force workers to reverse practices that damage the environment because the government might strictly control practices, but ZCDC didn’t change the realities on the ground. 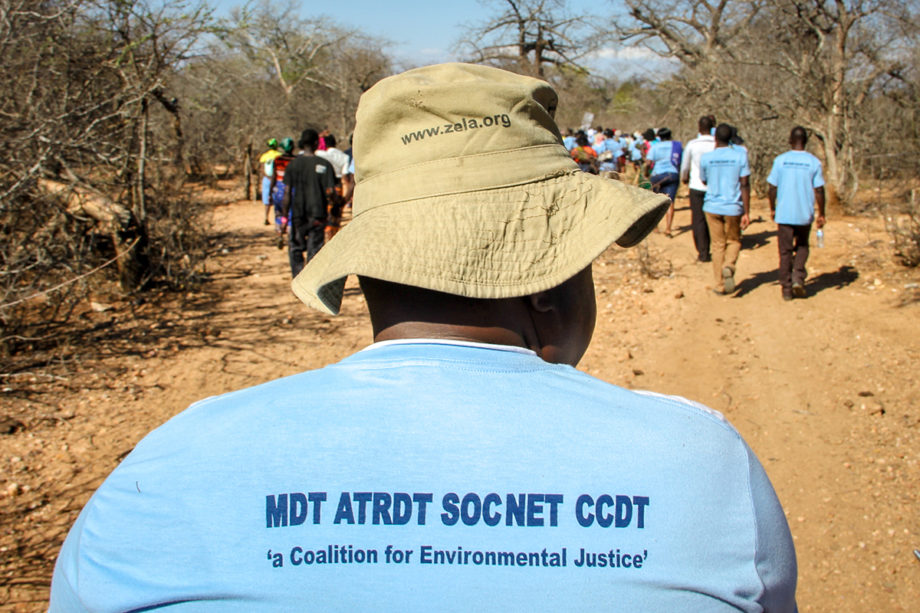 A local resident wears a T-shirt listing the names of organizations that created a coalition to ask the government to protect people and land from the negative impacts of diamond mining in the area near Zimbabwe’s border with Mozambique.

Kingston Chitotombe, regional manager for the Environmental Management Agency, confirms that ZCDC is operating without the required Environmental Impact Assessment certificate. ZCDC would have had to propose mitigation plans in order to get that certificate.

“We have tried to make them comply, and they still have not. As a result, we have opened a docket with the police on the matter,” Chitotombe says.

Once police reports are filed, the Environmental Management Agency will be able to pursue a case in court to force ZCDC to apply for the certificate.

Meanwhile, at least one company is contesting the government’s consolidation plan in court.

The environmental destruction caused by mining in the area has been well-documented. A 2012 report by the Zimbabwe Environmental Law Association found widespread chemical and heavy metal pollution, including evidence of chromium and nickel, which are both potentially carcinogenic. The water from local rivers, once used for drinking, now causes skin to itch on contact.

We have tried to make them comply, and they still have not. As a result, we have opened a docket with the police on the matter.Kingston Chitotombe, regional manager for the Environmental Management Agency, referring to the Zimbabwe Consolidated Diamond Company (ZCDC)

In October, a coalition of local communities and community groups formed to demand that the government change its ways.

The coalition formed after villagers discovered that a section of the Save River, which stretches from the middle of Zimbabwe through Mozambique and into the Indian Ocean, had dried up because ZCDC diverted its course with sandbags.

And that was only the latest in a string of grievances.

Shortly after diamonds were discovered in 2006, independent miners tore through the region, and the area’s already scant vegetation was largely destroyed as they dug pits to extract the gems, local people say. The miners chopped so much wood for their cooking fires that local people describe it as deforestation. Rivers began to show signs of pollution and siltation as the miners sifted soil into tributaries to collect the diamonds.

When industrial miners arrived in 2009, they did more of the same, says Solomon Mungure, a natural resources and environmental researcher at Africa University in Mutare, a town near the diamond fields along Zimbabwe’s border with Mozambique.

“They came in and cut down trees (and) discharged hazardous waste into rivers, thereby endangering the lives of inhabitants and livestock,” he says. “Trucks moving around also increased the levels of dust pollution in the gravel and dusty landscape in [the diamond region of] Chiadzwa.” 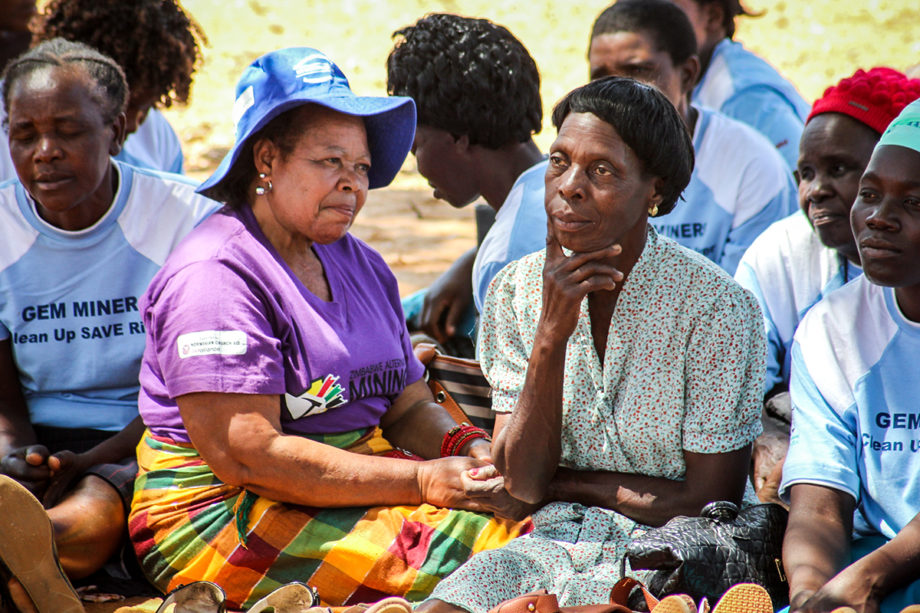 Rosemary Jena sits with her neighbors during a meeting of a coalition formed to demand that the Zimbabwean government force mining companies to protect the environment and eliminate dangers including open pits, where children and cattle have drowned.

Local water sources have been contaminated by the mining projects.

Individual efforts by people in the community to engage both the mining companies and the government’s Ministry of Mines and Mining Development were fruitless, Mudiwa says.

“We saw that if we continued to lobby to the authorities as individuals, we were not getting anywhere, just like we did over the past years,” he says.

The new coalition hopes to push the government to ensure that the environment and the rights of the people who live in the mining area are protected.

For people in the villages near the now-dry section of the Save River, it might be too late.

“The income from selling fish and horticultural produce from the gardens was used to pay for school fees for children and sustain families financially,” says village headman Nelson Mangwadza.

The river’s water was used for drinking as well as irrigation and fishing, he adds. Now, herders must move their cattle across long distances to access water.

Unsecured pits used by mining companies are another nightmare for villagers. Sometimes, livestock have fallen into them.

Rosemary Jena, a 60-year-old grandmother, says she once had 15 head of cattle from which she sold milk to pay her children’s school fees, and which plowed her fields. Now, she has only three cows. The others died after they wandered into unsecured slime dams.

The mining industry has also brought social decay, she says. Boys drop out of school to become miners, and girls venture into sex work or marry early, Jena says.