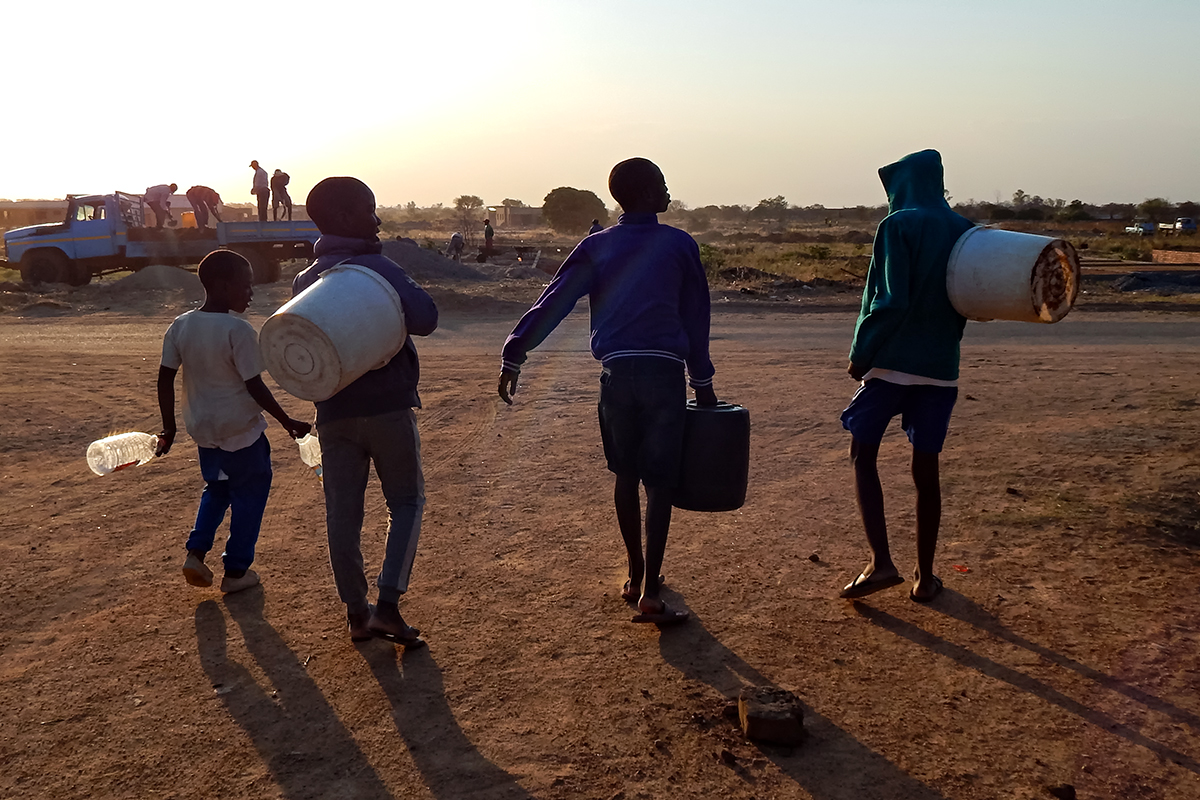 BULAWAYO, ZIMBABWE – It’s a chilly morning in Pumula South, a suburb of Bulawayo, Zimbabwe’s second-largest city. Samkele Ncube, a mother of two, is up early to prepare the stall where she sells hand-made clothes.

Ncube used to work as a tailor for a textile manufacturer, the Asmara Company, she says, but it folded in 2016 and she was laid off. After that, she took her children to stay with her mother in a village 141 kilometers (88 miles) away in the rural district of Insiza while she stayed in Bulawayo.

Her brother left Bulawayo in 2018, she says, when he lost his job as a security guard at a supermarket. Now he’s in Insiza too.

“Life in the city gets tougher by the day, as the price of basic goods and commodities goes up,” she says. “Life in the rural areas is more affordable.”

Today, Ncube says she sustains herself on the proceeds from her clothing stall and by renting out the rooms where her children used to sleep. She sends most of the money she earns back to Insiza to pay for their food, clothing and school fees, she says. 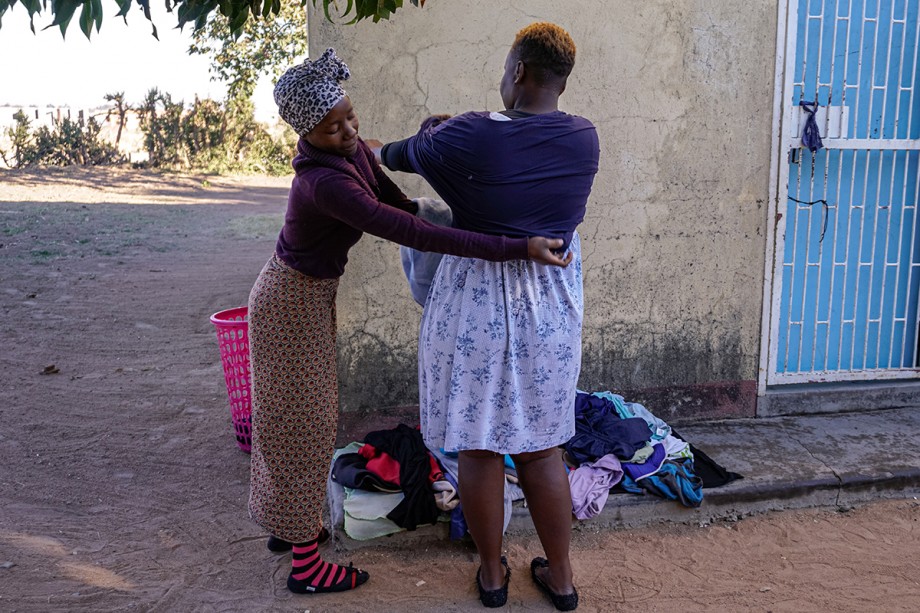 Samkele Ncube (left) helps a neighbor try on clothes at her stall in the Bulawayo suburb of Pumula South. Ncube had to send her children to live in her mother’s rural village when she lost her job at a clothing factory.

Even with her children living in Insiza, it’s a daily struggle for Ncube to make enough money to sustain the family.

When she first started trading clothes, she was earning between RTGS$60 and RTGS$80 in bond notes (about $6-9) per week, she says. But now, due to Zimbabwe’s unstable economy, she takes home half that. And with inflation, a new currency and a host of other issues, what she makes is barely enough to buy a pack of washing powder.

All over Zimbabwe, the cost of living is skyrocketing.

Since 2009, most people have used U.S. dollars for their daily transactions, when the Zimbabwean dollar collapsed. But in October 2018, banks converted all money in customer accounts to RTGS – a monetary unit not tied to a specific currency and worth much less than the U.S. dollar – wiping out many people’s savings. Prices of basic goods, including fuel and food, have risen sharply.

On June 24, the government reintroduced the Zimbabwean dollar and banned trading in foreign currencies, a move many fear will make the crisis even worse.

The situation has forced the closure of companies in major cities such as Bulawayo and the capital, Harare, leading to mass job losses. Factories across the country shed 55,000 jobs between 2011 and 2014, and there were further widespread closures in 2016.

As a result, many Zimbabweans have migrated from the cities to rural areas, where life is cheaper. Ncube says most of the 18 people who lost their jobs alongside her in 2016 have left Bulawayo because they could no longer afford to live there.

Many of the people who are leaving Bulawayo migrated there in the first place from rural areas. Now they’re going back to where they started – a phenomenon known as “circular migration.”

There is no data on precisely how many people have left Bulawayo for the surrounding rural areas, as a census has not been taken since 2012. That was before many of the factories closed.

But country-wide data indicates a clear move away from the cities. World Bank statistics show that Zimbabwe’s rural population steadily decreased over four decades from 1960. But that trend began to reverse in 2002. As of 2018, 68% of Zimbabweans live in rural areas.

Life in the city gets tougher by the day as the price of basic goods and commodities goes up.Samkele Ncube, who sent her children to live with their grandmother in a rural area outside Bulawayo

In January 2018, Dumisani Gumede relocated from Bulawayo, where he was working as an agricultural officer, to Maphisa, 121 kilometers (75 miles) away. “I realized that life in Bulawayo was getting harder by the day,” he says. “We have always had the rural home but lived and worked in the city.”

Now he rents out his city home in the suburb of Newton West for extra cash.

“Life in the cities is fast becoming unsustainable and a luxury to many, hence the urban-to-rural migration,” says Thomas Sithole, a political analyst at Plumtree Development Trust, an advocacy group based in Zimbabwe. “In the past it used to be the other way around because the economy was good and Bulawayo was an industrial hub.”

In rural areas, Sithole says, people do not have to pay for rent, water, fuel or utilities. Most people own the homesteads where they live and use boreholes for water, solar power for electricity and donkey carts to get around.

Sithole points out that there’s also a political twist to the reverse migration.

“Politically it serves the ruling party well, since most rural areas are their strongholds. On the other hand, the cities have remained strongholds for the opposition,” he says. When people move from the city to a rural area, they are often encouraged to change their voting habits by village chiefs who organize support for the ruling party, ZANU-PF. Those who don’t change their votes find themselves outnumbered.

“The urban-to-rural migration is a blessing in disguise for the ruling party,” says Sithole.

Felix Chari, an economist and business analyst at Bindura University of Science Education near Harare, says the flow of migrants doesn’t show any sign of stopping.

“This trend is likely to continue as long as the economy is this bad,” he says. “The only way forward is for the economy to get back on track and for Bulawayo to go back to being the industrial hub that it was.”