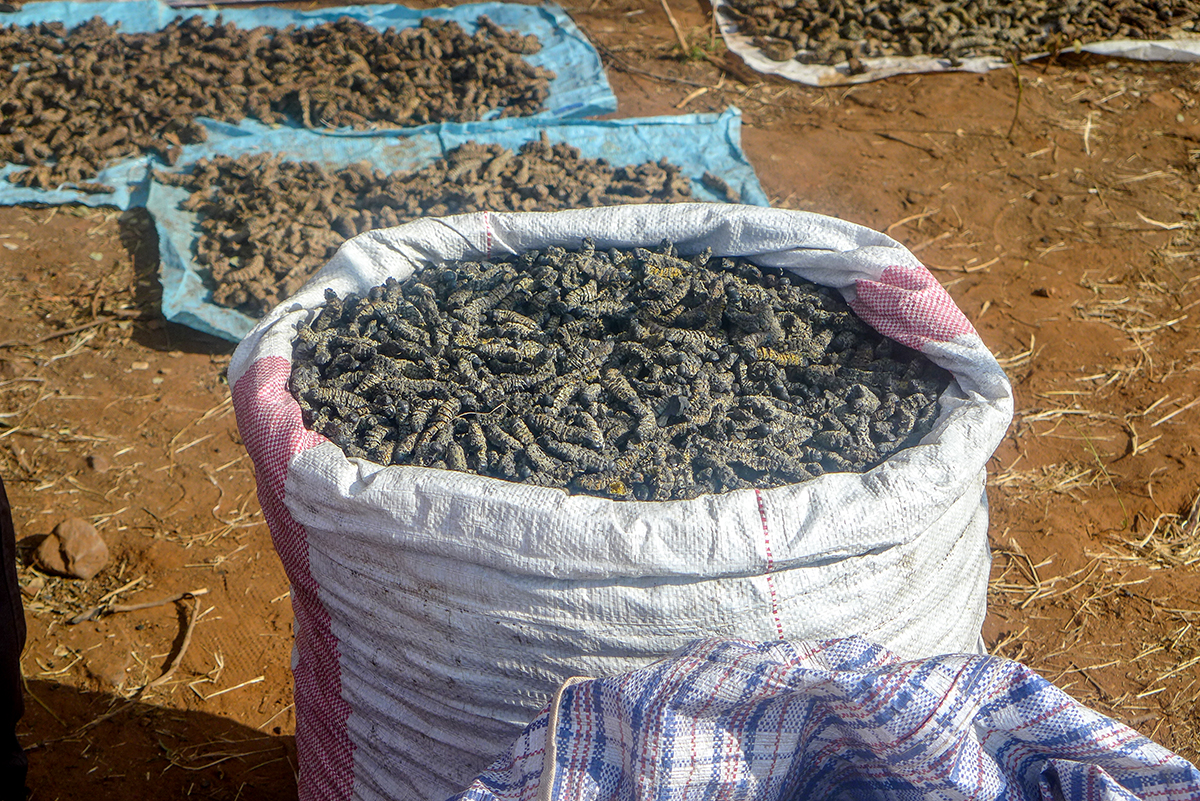 GWANDA, ZIMBABWE — As if out of the middle of nowhere, roughly 25 kilometers (16 miles) outside the town of Gwanda, a marketplace appears on the side of the highway. Those who have never been to this region of Matabeleland South are bound to slow down – even stop – to figure out why these home-like structures and make-shift markets exist. Those from the region already know the answer; it is the season of mopane worms, also known as amacimbi or madora in IsiNdebele and ChiShona languages, respectively.

As is the case with many countries in Southern Africa, amacimbi are a delicacy here.

At the market, mopane worms dry in the sun. Buckets and sacks are filled to the brim with the creatures. Other grocery items, such as cooking oil, rice, salt, macaroni, bathing and washing soap are also available, but not for sale – for trade. Mopane worms are the currency being used to purchase the grocery items. 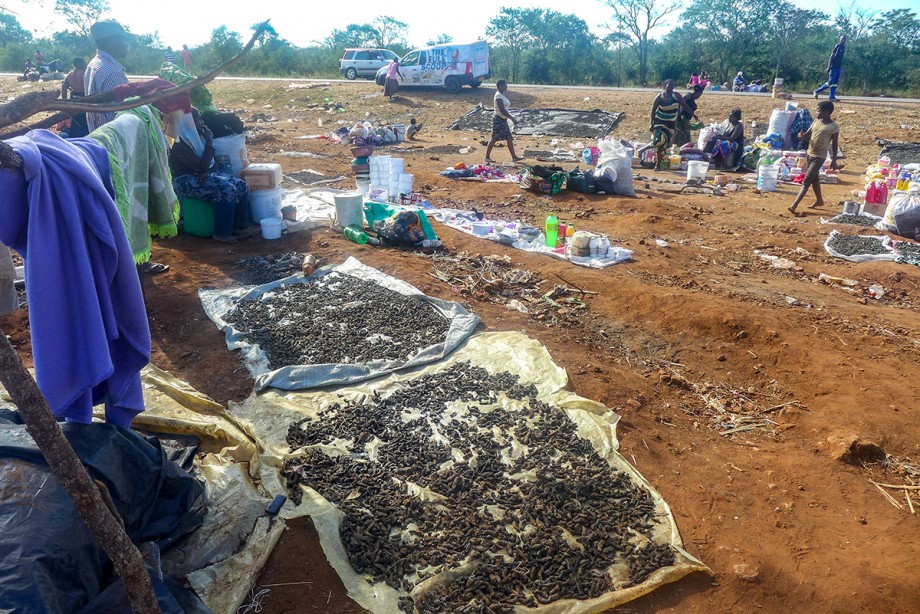 Temporary homes and shops are set up along the roadside during the harvest season. Here, outside of the town of Gwanda, some people stay for the entire season, spending their days gathering worms from the leaves of the mopane trees, and then preparing them for sale.

The harvest and sale of mopane worms is a booming industry.

The worm, which is almost the size of a cigar, is actually a caterpillar of the Gonimbrasia belina species, or emperor moth. The species is commonly referred to as the “mopane worm” because it feeds on the leaves of mopane trees, after hatching in the summer season.

The Forestry Commission has indicated that the harvesting and selling of mopane worms could rack in about half a million dollars this season. As of April 2017, a total of 400 tonnes (881,849 pounds) of mopane worms have been harvested in Gwanda, Beitbridge, Matobo, Bulilima and Mangwe, with Gwanda being the highest producer.

The Harvest
At this market, three women and a young baby are sheltered together in a shack. Litsheni Sibanda, who has been on the site for three days, says she came from Beitbridge, a border town in Zimbabwe, about 108 kilometers (106 miles) away. She has come to harvest mopane worms with her daughter, Mavis Mudhawu, her daughter-in-law, referred to as MaSiziba, according to her totem or spirit being, and her grand-daughter.

“We came late, the worms are almost finished,” Sibanda says. “The people who harvested more are those who came more than two months ago, but some are gone now to their homes and others have gone to harvest in the bush and will only come after dark.”

Sibanda says so far she has not caught much, only a 9 liter (2.3 gallon) bucket of worms. A majority of customers are motorists and vendors who buy a 20 liter (5.2 gallon) bucket for between $20 and $25, and then travel back to Gwanda, where they will sell the worms for a profit. 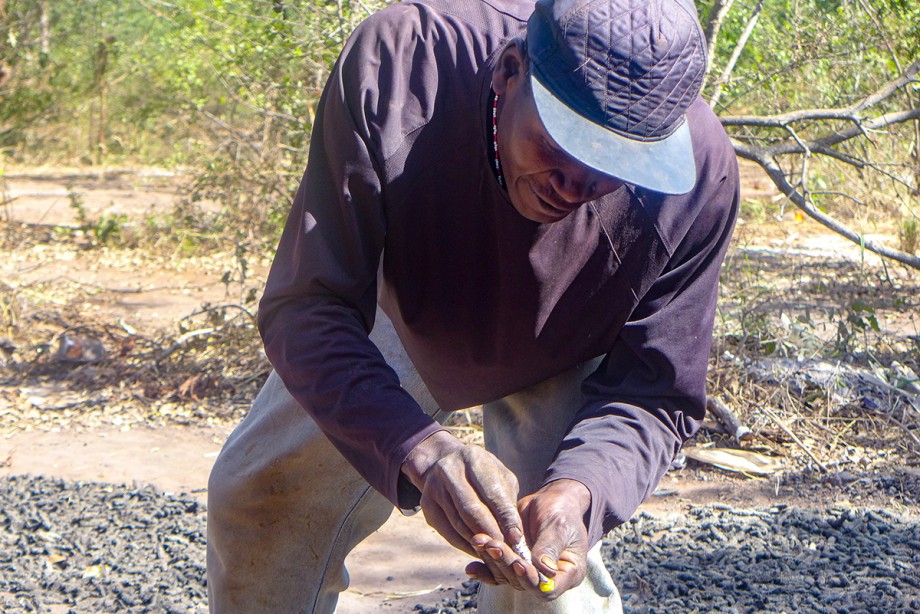 Percy Sithole demonstrates one step in the preparation process of mopane worms. Water is removed from inside the worm, and then the worm is placed in the ashes of a fire in order to dry out.

This year Gwanda has had a bump in the harvest of mopane worms, due to the heavy rains – the ideal weather condition for the worms to flourish. The Forestry Commission is not pleased with some of the harvest practices, citing that the harvesters contribute to environmental destruction by cutting down trees to get firewood. Fires are built, and the worms are dropped in the ashes of the fire in order to dry them out.

Most of the people harvesting have no formal employment, however local media have reported that nurses were leaving duty at Maphisa District Hospital in the same province to harvest the worms.

A harvester who spoke on condition of anonymity said he had not seen anyone with formal employment harvesting.

“This is a painful job,” he said. “No-one can leave a formal job to come and harvest mopane. I have not seen them harvesting but I have seen a few bringing in groceries for barter exchange.” 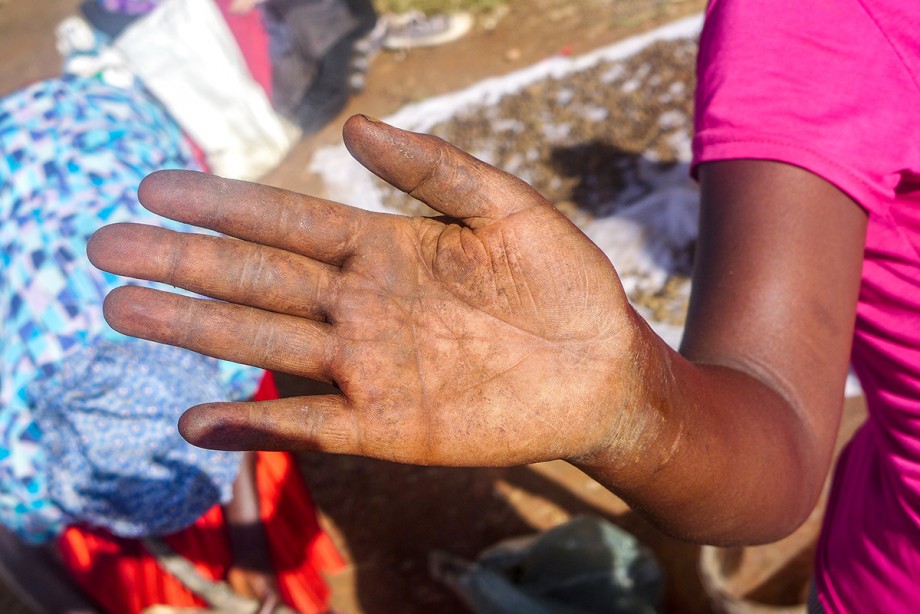 Lillian Makuvire displays her palm, which is stained and cracked from preparing mopane worms without gloves.

A few feet away from Sibanda and her family is a group of people who have gathered to rest for the afternoon. They have been here for a little over two weeks. Petias Mefiboshet Chikodze traveled from Wedza district, 555 kilometers (345 miles) away from Gwanda, with his brother Ashel Chikodze.

Unlike Sibanda and her family these brothers use gloves to harvest. The worms are said to be painful to prepare, yet Sibanda says she is more effective without the gloves.

Gloves or not, Sibanda and her daughter agree, the men harvest more mopane worms than the women.

As it turns out, the plot of land on which the harvesters live and work is privately owned.

“This place belongs to someone, on the first day of arrival an individual pays a tax of a 4 liter (about 1 gallon) bucket of mopane worms and is free to harvest until they decide to leave,” says Petias Mefiboshet Chikodze. 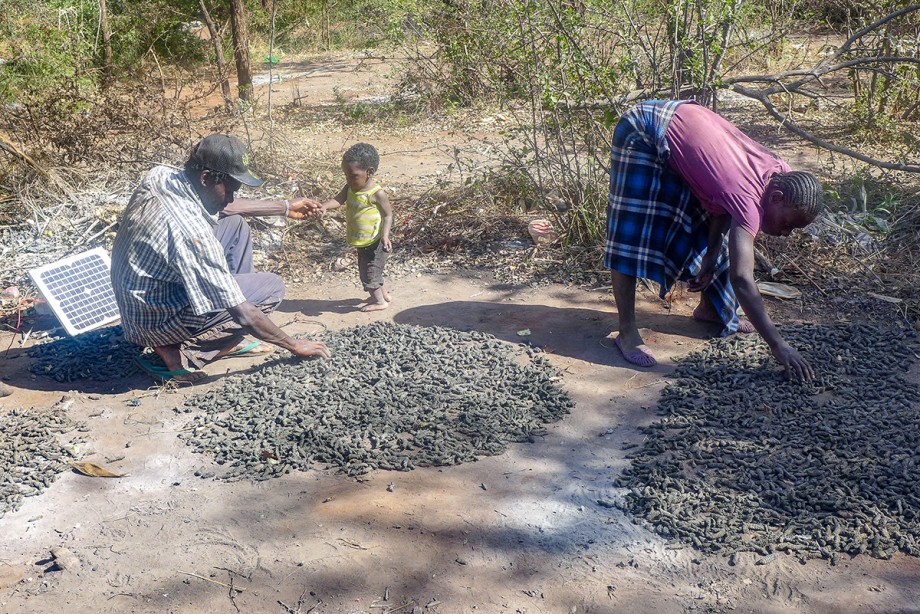 George Chiwata and wife Premodial Gugwe, along with their small daughter, spread mopane worms out to dry in the sun. It’s one of the last steps before the worms are ready for sale.

Next to him are a family, George Chiwata and his wife Premodial Gugwe, with their one-year-old daughter. They also, like Sibanda, have come from Beitbridge, and are happy with the 40-50 kilograms (88-110 pounds) harvested in nearly two days. They sell 20 liters (5.2 gallons) for about $20-$25.

Not every harvest, however, is being sold. The people who stay throughout the peak harvest season also have to eat, making the marketplace the ideal setting for trade. A 2 liter (1/2 gallon) bottle of cooking oil trades for 4 liters (1 gallon) of mopane worms, while the rest of the goodies are going for one liter (1/4 gallon) – except sugar and rice which exchange at 2 kilograms (4.4 pounds) for 2 liters (1/2 gallon) of mopane worms each.

There seems to be no limit to what can be traded here. Earlier, a bicycle was exchanged for a hefty amount of mopane worms.

Chiwata and Gugwe already have a solar panel which they traded for with mopane worms and are listening to Radio Zimbabwe as they rest. They have managed to make the bush as comfortable as possible.

Upon being asked when they will leave the area, the Chikodze brothers say they will stay until the worms are finished.

“We are not going anywhere unless we are sure there is nothing left to harvest,” Petias says. 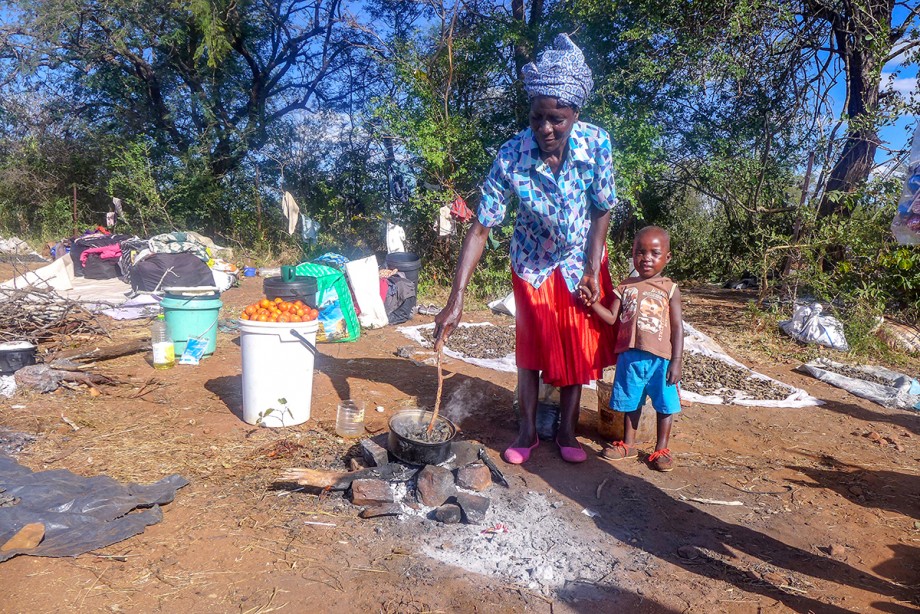 Sithabile Moyo, along with her granddaughter, Panashe Ncube, prepare a meal of mopane worms. They boil the dry worms, and then add tomatoes.

Vimbai Chinembiri, GPJ, translated some interviews from Shona and Ndebele to English.