Skip to main content
The story you are reading was published on Friday April 21, 2017. To read more recent stories click here. 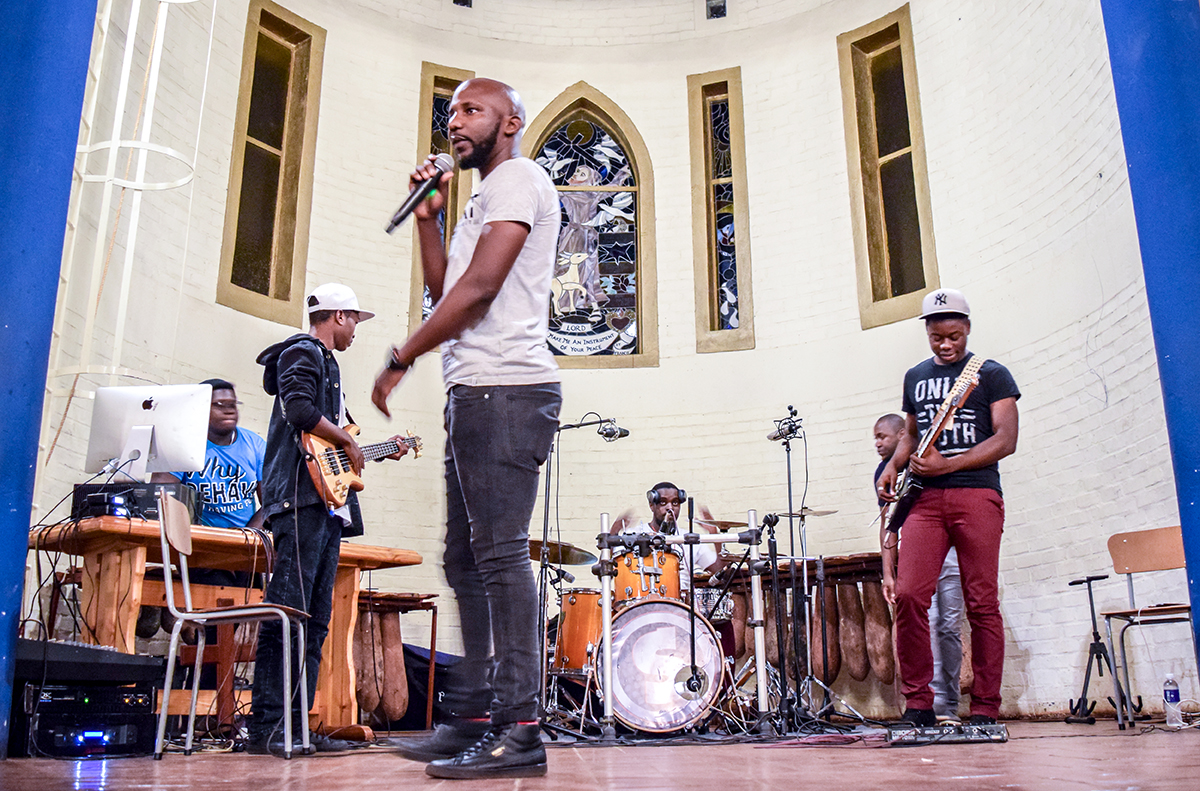 HARARE, ZIMBABWE — Young entrepreneurs are creating ways to carve out businesses in Zimbabwe despite difficult economic conditions. GPJ interviewed several who are inspiring others to follow their interests and find new ways to earn a living.

Mapondera, an animator and multimedia designer, says he resorted to drawing comics only because the local market for video animation wasn’t in demand. Mapondera met Makoni, who had created and published the first local action comic book in Zimbabwe — “Gundog and The Gift,” in 2009.

“We found that we had a lot of things in common and we felt a need to grow an industry where creatives, such as ourselves, doing what we do, which is comic book creation and illustration, can improve and grow,” Mapondera said.

Mapondera and Makoni soon began teaching together at the Global Academy, a film and design school in Harare. They also began consulting by teaching others how to storyboard and build a business in the comic book industry. Comexposed is their 4-year-old brainchild. 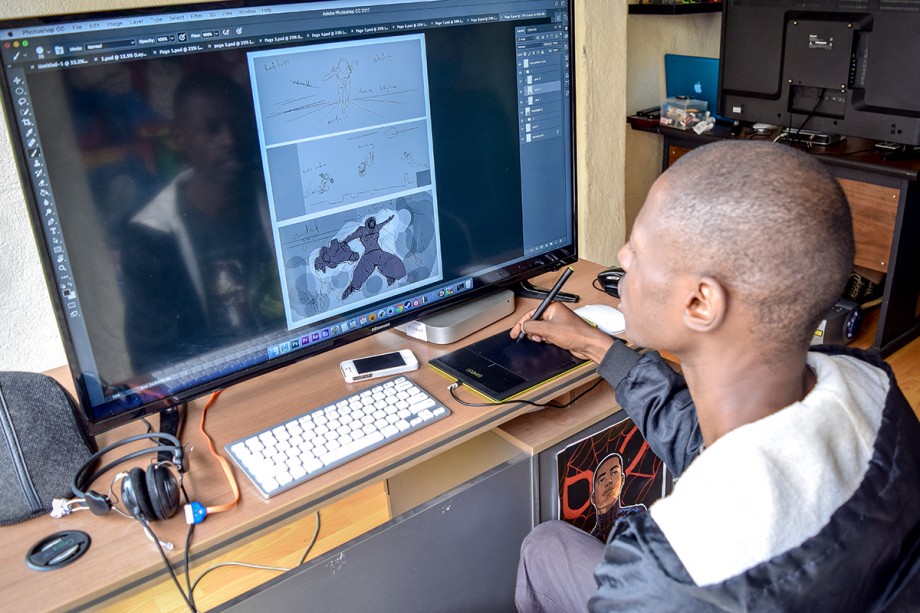 Eugene Ramirez Mapondera works on some of his characters at the offices of Comexposed, the Harare, Zimbabwe, company he co-founded to bring animators together.

“It was inspired by frustration,” Makoni said. “We had been doing this for quite some time in our own capacity and it was apparent, that this, though we love it and it is appreciated locally and globally, just wasn’t being made here.”

Makoni added that even though the need for animators existed in Zimbabwe, a general prejudice was associated with locally offered services.

“While we were teaching, the frustration grew,” he says. “We saw these students who we were equipping with this skillset, and the vacuum in terms of opportunities in the market.”

They decided to divert the focus to local talent by showing that local artists were just as good or even better than international artists. Hence the name Comexposed — expose people to this talent.

“We chose comics because they are an easy entry,” into the market, Makoni says. “We are Africans. We love stories and folk tales, and comics are a very visual way of presenting new ideas.”

He said that comics were a gateway to bigger things, including video games and eventually movies.

Mapondera and Makoni started by cultivating a community of artists. Then they encouraged their students to participate and share their work to provide market exposure.

So far, the most recognized Zimbabwean comic book in their group is “Razor-Man,” by artist Bill Masuku. It features a vigilante who works as a mechanic by day and a creator of crime-fighting gadgets by night. Masuku had no prior education in art when he started working on “Razor-Man,” Mapondera says.

“I watched him for a while and I decided to merge his company with mine.” Mapondera says. “I put in some resources to make sure he could put his comics online and trained him at the same time.”

Comexposed has more than doubled its revenues in the last year, and much of its growth is international, Makoni says.

“Our increase in value is influenced directly by the event’s popularity,” he says.

The internet is key to both local and international opportunities, Mapondera says.

“We make a lot of effort to talk about what we do,” he says. “We are extremely active on mainstream media and a lot of people were interested in our events. From there we have gotten a number of people reaching out for assistance and guidance.” 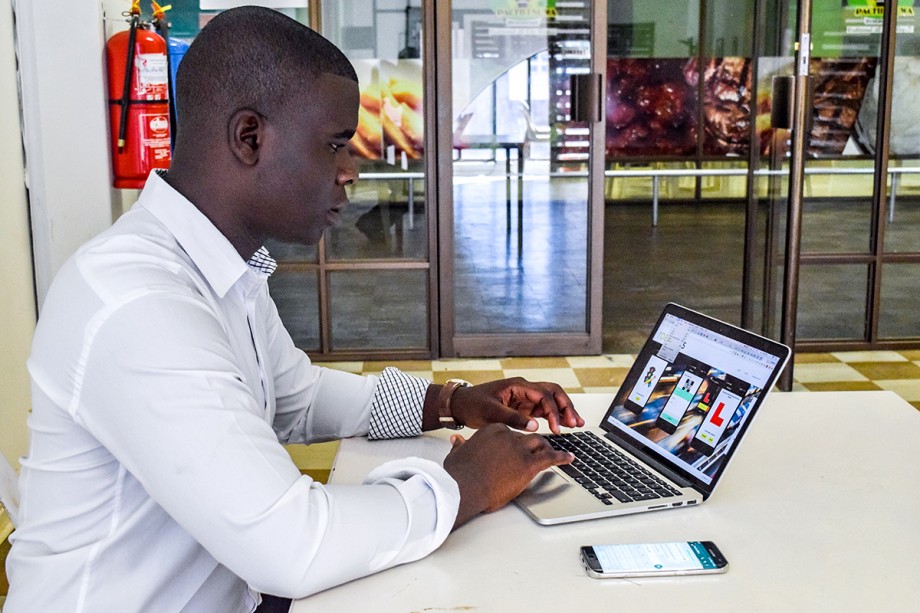 When app developer Tawanda Chikosi, 32, learned that 60 percent of the 243,000 people who sat for provisional driver’s license exams failed the test in 2014, he started thinking of a business to solve the problem.

He consulted young people and some of them were failing more than three times.

“We realised that the exam is fair; people fail because of ill preparation because they buy books from the streets that are not accurate,” Chikosi says.

From there he created a mobile application to help prospective drivers study for the test and founded Harare company Road Rules Solutions Private Limited.

He also thought of another driving-related problem to solve.

“There was a public outcry against the police by drivers regarding spot fines and allegations of the police overcharging people because people did not have knowledge about these fines,” Chikosi says. “We then incorporated traffic fines in the mobile application to empower the citizen.”

The next version of the app will include a variety of services to aid drivers, such as contacts when a driver has had an accident as well as contacts for driving schools and insurance companies.

About 30,000 have downloaded the app to review it, he says. To study traffic rules and regulations users pay $2 per year. 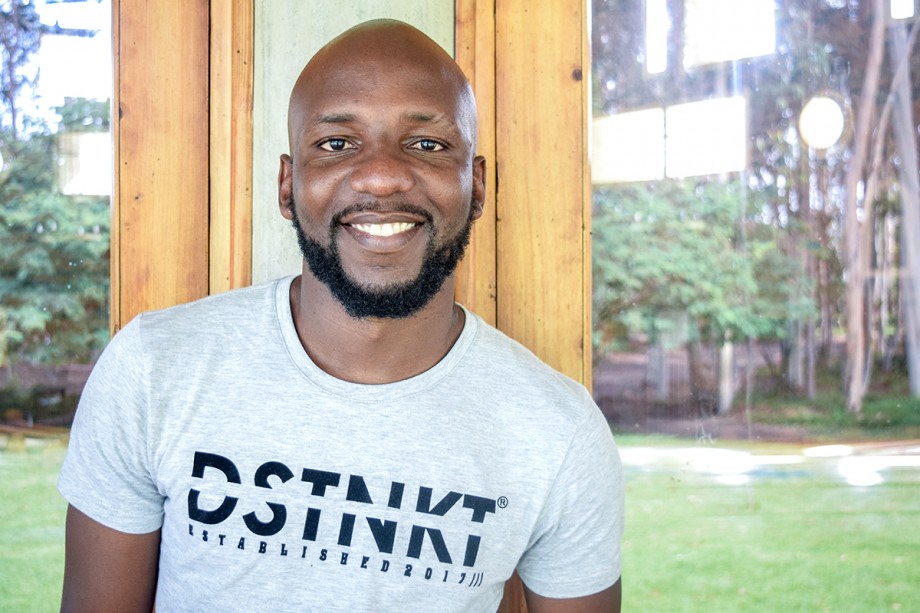 Ngonidzashe Onismas Mavera, a musician and Christian minister who also goes by his stage name Prophecy, takes a portrait at At Watershed College in Marondera, a town in Mashonaland East, Zimbabwe.

Ngonidzashe Onismas Mavera, 31, a rapper, aims to change the face of Christianity by incorporating gospel messages into music popular with teenagers and young adults.

Mavera began writing songs at age 13, and as a rebellious teenager he says the lyrics were not clean and certainly not about Jesus. In early 2004, he decided it was time to be more intentional about his life and later that year, Mavera was diagnosed with Hodgkin’s lymphoma. He fought the disease and has since moved on to collaborate with the nonprofit group We Can Beat Cancer as their creative consultant. About the same time, his uncle, who was a youth pastor “challenged me to use hip-hop as a way to preach the word.”

Mavera and his friends got together in 2004 to form Christian Rappers United (CRU), and set out to create “clean” rap music.

“From the group, I pulled away and took it further,” he says. “I felt I had a call on my life for youth ministry and I pushed harder. In 2005/6 Prophecy was born.”

He’s performed in Kenya and South Africa, and the internet has enabled him to reach fans throughout the world through iTunes and Tidal. Thousands follow him online, and a November event in Harare to launch of his album, “Mask Off,” sold out to a crowd of over 1,000 local fans.

Mavera says he is still adapting to the recognition and response the music is getting, and his aim is to be an alternative to other popular music and lifestyles.

“I’ve made a lot of mistakes,” he says. “I talk about experiences that I have. I am simply saying, ‘Guys, I know you think drugs and things like that are cool, but it’s not.’ If I could live my life again, I could undo a lot of things. The drive is to push them to make better decisions than the ones I made.”

“We want to show people that there is nothing lame about loving Jesus,” he says. “We are here to change the face of Christianity, of local gospel music.” 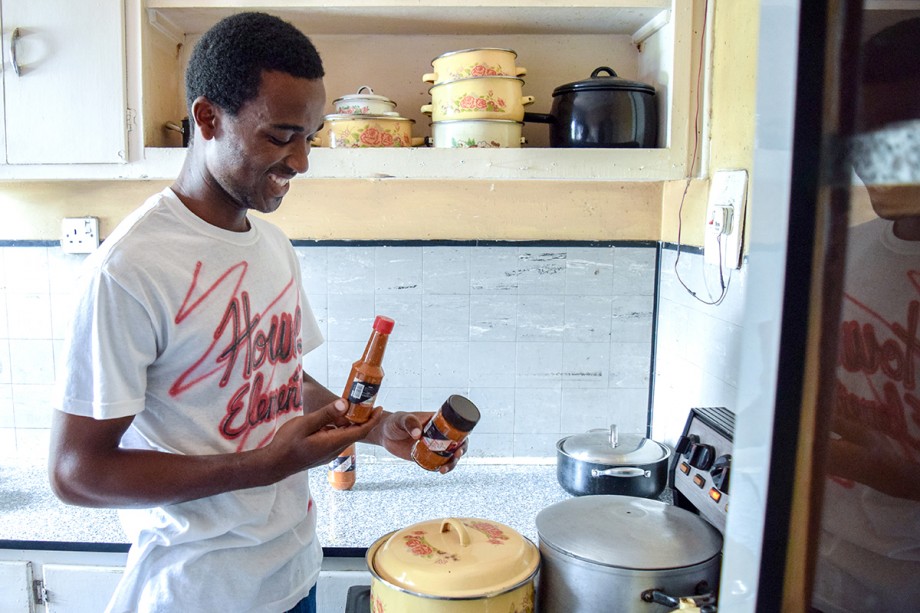 Tapiwa Clive Chidiya cooks in his kitchen in Houghton Park, a neighborhood in Harare. He and his wife, Lisa Chavaguva, make homemade chili sauce under the brand name African Drum Chili.

Tapiwa Clive Chidiya, 24, is an entrepreneur just starting out. He and his wife, Lisa Chavaguva, make chili sauce, selling it for $1.50 a jar under the brand he created called African Drum Chili.

The sauce is made from natural ingredients and without spices. Chidiya sells it door-to-door in their Houghton Park neighborhood in Harare. It’s also become well-regarded at the suburban outdoor barbeque spot called kwa-Zindoga.

Profits from the door-to-door and barbeque sales are good, he says, but he is pushing to get local stores to stock the sauce as well.

“Some of the shops I approached I got turned down, but I am not discouraged,” he says.

The biggest challenge now is transporting the goods, he says.

“I can make lots of different sauces but since I am not based anywhere and I sell door-to-door, I cannot carry a lot of them myself,” he says.

So Chidiya is readying to expand to a pop-up shop, where he also plans to offer his own specialty-designed brand of clothing for men, women and children.