Skip to main content
The story you are reading was published on Wednesday February 15, 2017. To read more recent stories click here. 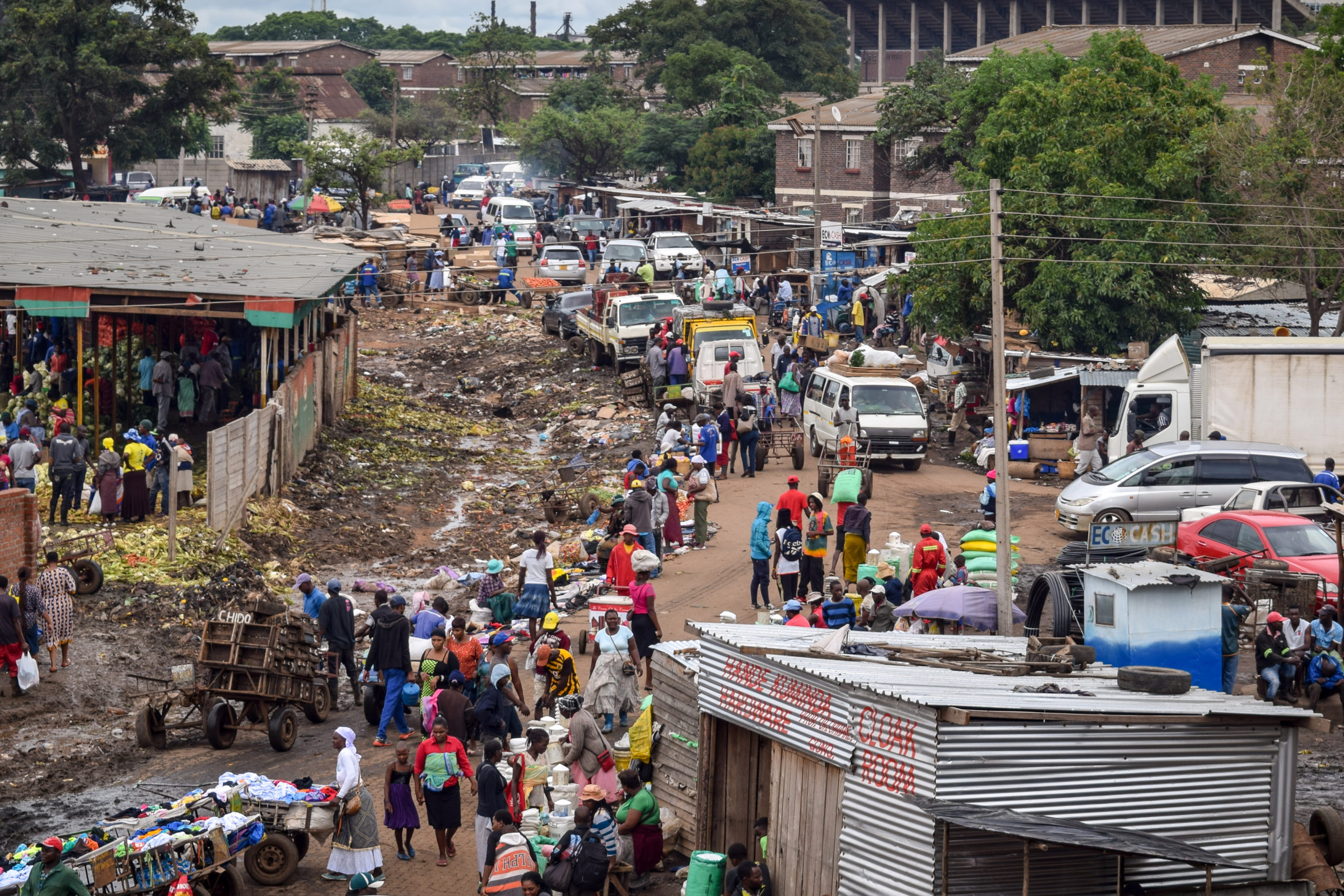 HARARE, ZIMBABWE — It’s a busy day at Zimbabwe’s largest market, Mbare Musika, where farmers offload mangoes and other produce that will end up in vendor stalls, restaurants and kitchen tables citywide.

Near the trucks of fruit and vegetables, heaps of uncollected garbage molder. Maggots breed in the waste as buyers and sellers hurry to make deals. It’s business as usual despite the typhoid outbreak declared by the government in December.

Nine deaths from the disease, 85 confirmed cases and 2,352 suspected cases have been reported since the outbreak as of Jan. 1, according to a report released by the Ministry of Health and Child Care. By mid-January, the ministry said the numbers of new cases were diminishing, with seven confirmed cases, 411 suspected cases and two deaths from typhoid reported as of Jan. 17. Uncollected garbage, sewer bursts and contaminated water are cited as the major causes of typhoid and similar diarrheal diseases. 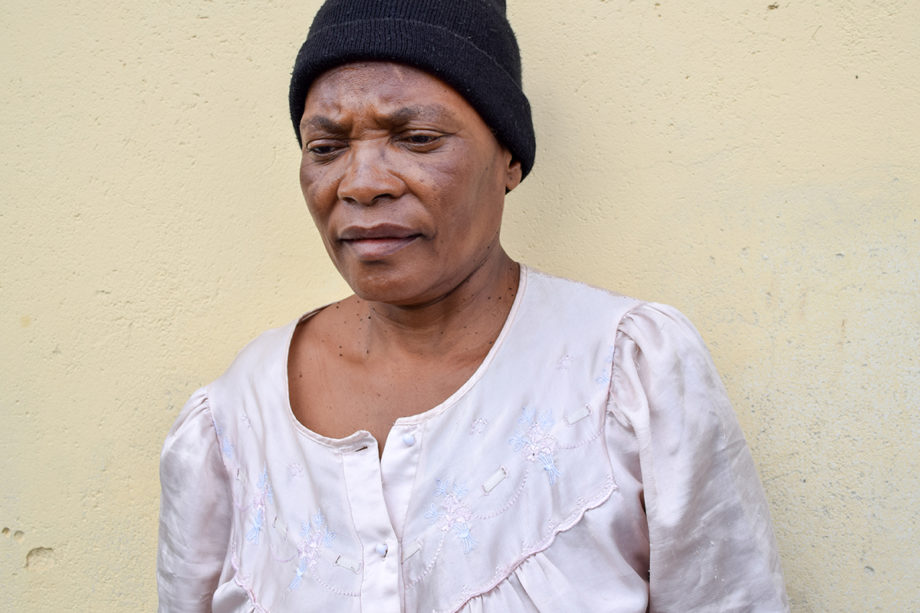 Margaret Masando, recovering from typhoid, poses for a portrait on Jan. 10, 2017. Masando, who was infected with typhoid over the Christmas holiday, lives in Mbare, a high-density neighborhood in Harare.

Margaret Masando, who is recovering from typhoid, suspects that the major cause of her illness was the sewer burst that occurred on Dec. 25 at her home in Mbare, a high-density residential area located about 5 kilometers (3.1 miles) from Harare’s central business district.

Instead of celebrating Christmas, Masando spent the night sick and eventually ended up in a local hospital.

“The sewer burst was reported at our municipal offices but they did not come to attend the matter,” for more than two days, Masando says. Even so, this is better than it once was.  “We used to experience sewer bursts at least four times a month,” she says, but after the typhoid outbreak was reported this year, the local health department became active and the service attending to bursts is faster than it once was.

While typhoid is surfacing again in 2017, full-blown epidemics occurred in 2008, 2009, 2010 and 2011. A 2014 article by World Health Organization epidemiologist Jonathan A. Polonsky and others links the disease to underinvestment in maintaining Harare’s water and sanitation infrastructure.

Since water is rationed, some residents have resorted to drilling unauthorized boreholes and wells, most of which have not been tested to ascertain if the water is safe for drinking.

Fungisai Nikati, a Mbare resident, says sewer bursts and the fecal water discharged are a big problem and residents worry when children play nearby.

“At times our children have on-and-off diarrhea and we fear they might end up getting typhoid,” says Nikati.

Zimbabwe’s Minister of Health and Child Care, Dr. David Parirenyatwa, says the war against typhoid won’t be won as long as sewers continue to burst, potable water is unavailable and trash goes uncollected.

“We will not be able to get rid of typhoid, or cholera or diarrhoeal diseases if we have unhygienic conditions,” he says.

Dr. Evans Masitara, secretary general of the Zimbabwe Association of Doctors for Human Rights, says the Ministry of Health and Child Care should pressure city health officials to put proper structures in place to stem the loss of lives, which he says likely are higher than the government is reporting.

“We believe the cases of typhoid are higher than what is being portrayed by the city health department because private clinics and hospitals are treating typhoid patients and these are not included in the recorded cases,” he says.

Michael Chideme, acting corporate communications manager for the Harare City Council, says the city council has improved water delivery and is promptly attending to sewer chokes and bursts as part of addressing the causes of typhoid. He said the city is also decommissioning contaminated boreholes in Mbare and another Harare neighborhood, Budiriro. 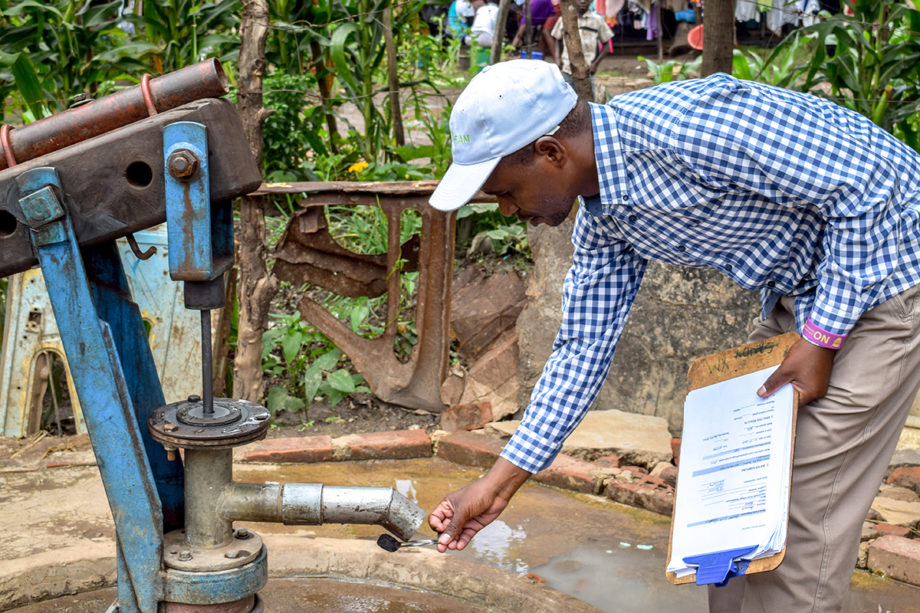 A man takes a water sample on Jan. 10 at a borehole in Mbare, Harare, where a typhoid outbreak is reported, to ensure it is safe. Contaminated water is one of the major causes of typhoid, and the city council has decommissioned some boreholes in Mbare and Budiriro where the water was found unsafe for consumption.

A three-year project to refurbish and expand water and wastewater facilities in the city is ongoing, and 90 percent of the work to refurbish Harare’s main water station, the Morton Jaffray Water Works, has been completed, according to a September 2016 report by L. Mukumguma, acting chairman of the city’s finance and development committee.

He added that the remaining 10 percent as well as refurbishment of several water and wastewater treatment plants — all part of a three-year project that should have been completed in June 2016 — had lagged because of a glitch in disbursing $62 million by the Export and Import Bank of China.

Pfungwa Kunaka, principal director in Zimbabwe’s Ministry of Finance, says the disbursement was not released because the government faced challenges in services loans during the 2016 financial year, owing to cash flow challenges.

“We are still hoping for the completion of the work by end of year but it largely depends on the capacity to make outstanding loan repayments on the China loan portfolio,” he told Global Press Feb. 1.

Harare’s 2017 budget proposed spending $50 million to improve water and wastewater stations, and another $8 million to replace and repair refuse trucks so that the city would continue to have one refuse truck for each ward. It’s unclear whether these amounts will be available.

Chideme says the city council is finalizing the tender process for the compacting trash trucks and will soon advertise for companies to begin offering bids to supply them.

Meanwhile, to combat illness, he says, the city council has suspended water rationing, which began in October 2016, but will not stop disconnecting defaulters from the city’s water meter system that has been set up in several suburbs.

Precious Shumba, director of Harare Residents Trust, a nongovernmental group that advocates for the city’s residents, says the issue of typhoid cannot be addressed when the city council limits potable water sources.

“The department of water is going out disconnecting water yet the city health department is saying the absence of safe water sources is causing diseases,” says Shumba. 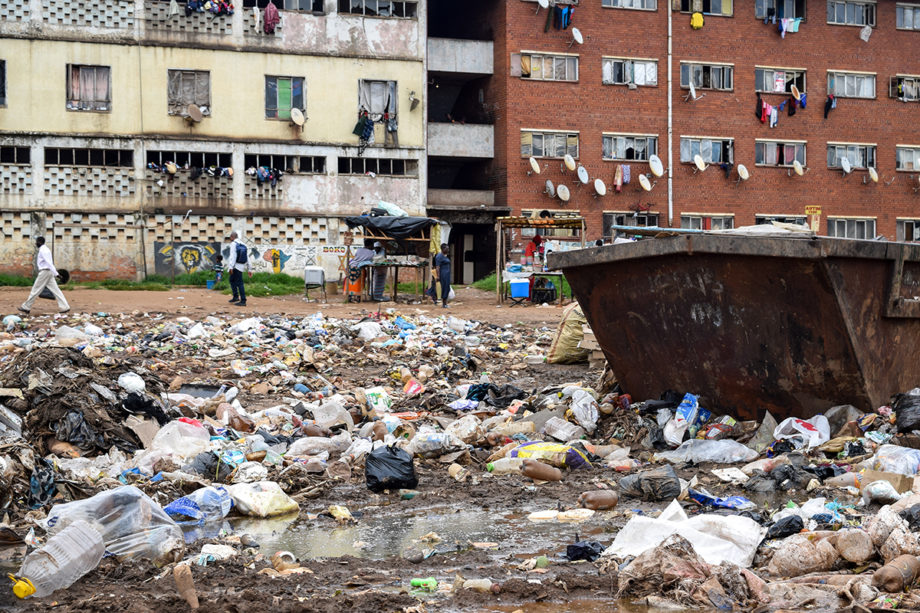