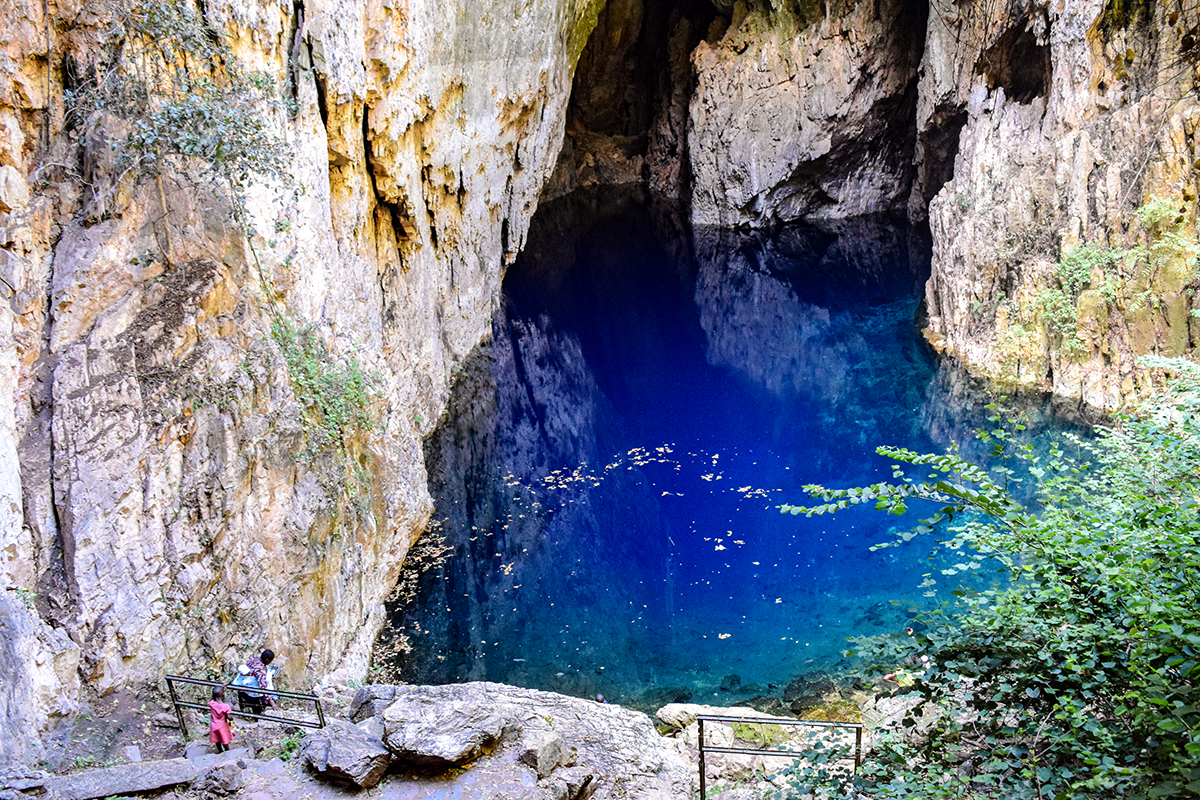 Families and school children walk past each other on the narrow walking paths. Others are rushing to go inside the caves to have a glance at the famous pool, while some are coming out of the caves looking exhausted from the trek up and down the rocky path.

Jeffery Munemo, a local tourist, says he had never visited the Chinhoyi Caves, despite being Zimbabwean.

“I stay in Bindura and I brought my family here because I heard a lot about this place,” he says.

The Chinhoyi Caves are a monumental tourist site located in Chinhoyi, a city in Mashonaland West province in Zimbabwe. They’re a historical site that has been in existence for decades, attracting both domestic and international tourists who visit for a glimpse of the famous Chirorodziva  — commonly referred to as the “Sleeping Pool” or the “Light Pool.” Some even come to scuba dive in the pool. Hollows and tunnels are a dominant feature of the caves system, and the caves are composed primarily of dolomite and limestone.

Chinhoyi Caves are also believed to be sacred, and spirit mediums visit the place for ancestral worshipping or to hold cultural ceremonies.

Munemo says what was most amazing about the place to him was the blue water in the Sleeping Pool. 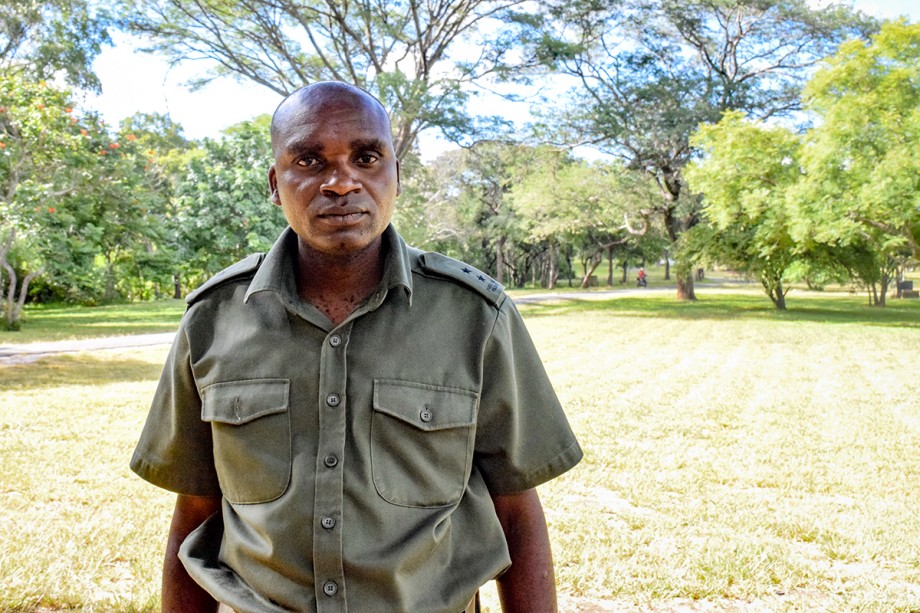 Petros Mwera, an extension and interpretation officer with the Zimbabwe Parks and Wildlife Management Authority, shares his knowledge of Chinhoyi Caves during educational tours.

A Pool with Many Names
The pool within the caves is referred to as the Sleeping Pool because of the stagnant water, and the Light Pool because the light from the sun beams directly into the blue water. Today, the names are used interchangeably, but the caves’ traditional name, Chirorodziva, has historical meaning.

The traditional name means the “pool of the fallen,” according to ZimParks. The name dates back to the 1830s when the Angoni Tribe, who were migrating north, ambushed the people who lived near the caves and threw their bodies into the pool. The name was also influenced by the cruel acts of Chief Nyamakwere, who lived in the area before the Angoni tribe.

“Chief Nyamakwere was a notorious and cruel chief; anyone whom he saw as a rival would be tied with a rope and a stone and thrown into the pool and his/her body would not submerge on top of the water because of the stone they would have been tied and thrown with,” Mwera says.

The human remains of the people thrown into the pool are still believed to be there.

A Significant History
The dates of when chiefs and their clans lived in the caves are not known because it was never documented, Mwera says. However, pottery and human remains unearthed from the area showed radiocarbon dating back to 650 A.D., according to ZimParks.

The pool within the caves is referred to as the Sleeping Pool because of the stagnant water, and the Light Pool because the light from the sun beams directly into the blue water.

The area was named after headman Chinhoyi, a man who killed the notorious Chief Nyamakwere and then took up the chieftainship, Mwera says.

Within the dark caves, there is a section referred to as “the singing of the bats,” Mwera says, where bats produce a melodious sound that fills the caves. There is also a fig tree that has been there for more than a century.

“It is believed our ancestors used to get the meals at this tree. They would come to the tree whenever they were hungry and clap, and would be provided with a cooked meal in a wooden plate,” says Mwera.

The burial of the chiefs, as well as the stories of the generous fig tree, are believed to have happened before Frederick Courteney Selous, a great hunter and the first person to document the beauty of the caves in 1887, mapped the area, Mwera says.

According to when the whites came, an unspecified date, says Mwera, they sealed the tree hollow with cement because they did not believe in the stories of the fig tree.

The cement, Mwera says, was removed in 2013 after a traditional gathering by spirit mediums that took place at the caves.

A Local and International Destination
Tendai Mbera, a local tourist who visited the site with his fiancée, says the caves are a great view and are naturally amazing.

“I never had the chance to visit the place since I was young and I am enjoying everything that I am seeing,” says Mbera.

Josephine Mpofu, who visited the caves with her family from Bulawayo on their way from another tourist site in Zimbabwe, says what she loved most about the caves is that they are natural and not man-made.

“This is a reflection that there are nice places in Zimbabwe that you can visit beyond the bad picture that Zimbabwe is given,” she says.

Zimbabwe is often given a bad picture in the world because of its weak economy and high unemployment rate.

People should come and have an experience of the caves and their historical significance, Mwera says. 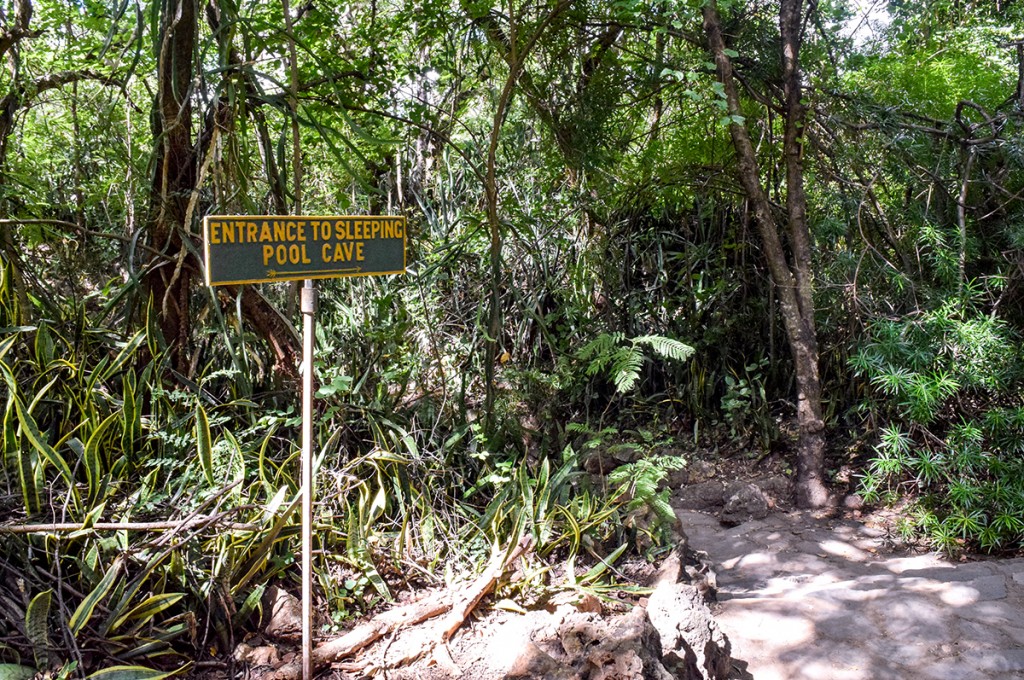 To enter Chinhoyi Caves, follow the signs for the Sleeping Pool down the rocky path. 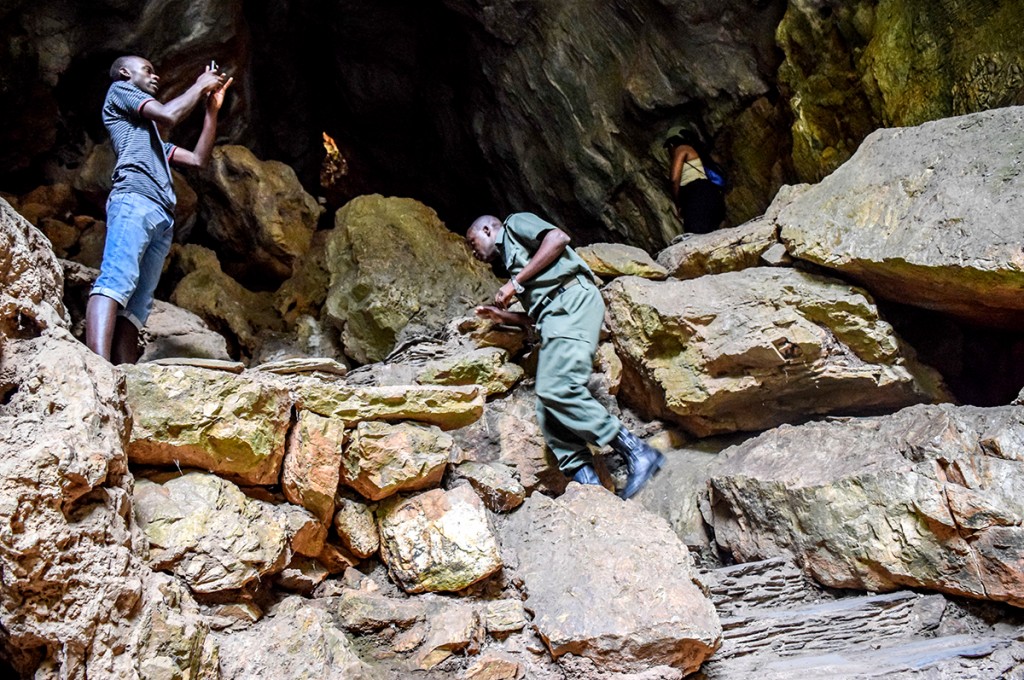 The caves are made of dolomite and limestone. During a tour, Petros Mwera (right), extension and interpretation officer, explains how the caves were developed. 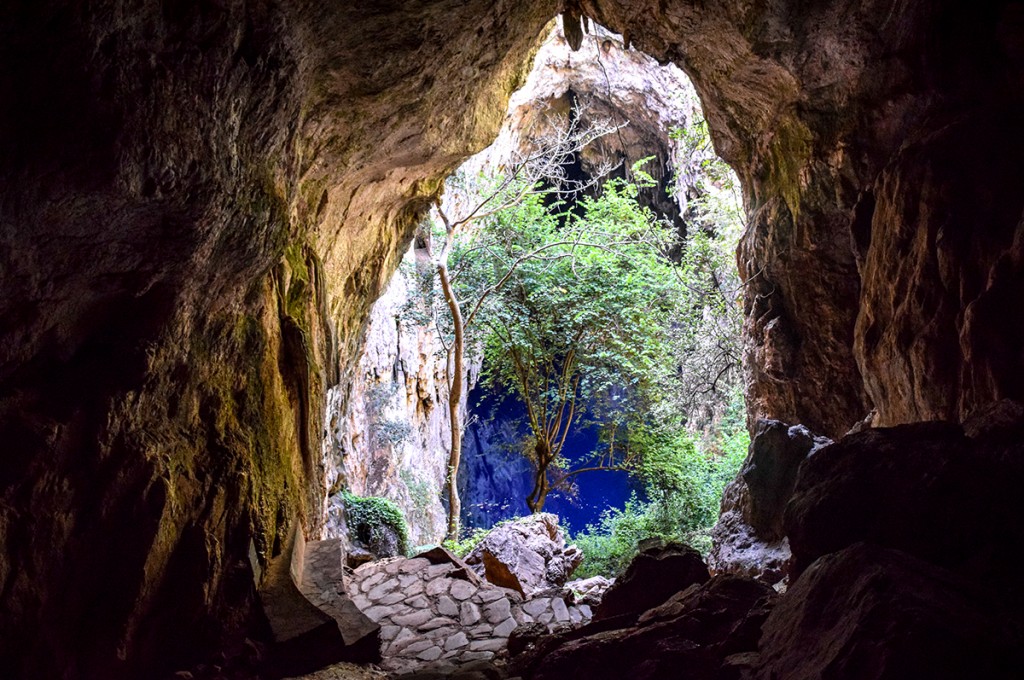 Standing within the darkness of the caves, the blue water of the Sleeping Pool is hard to miss. 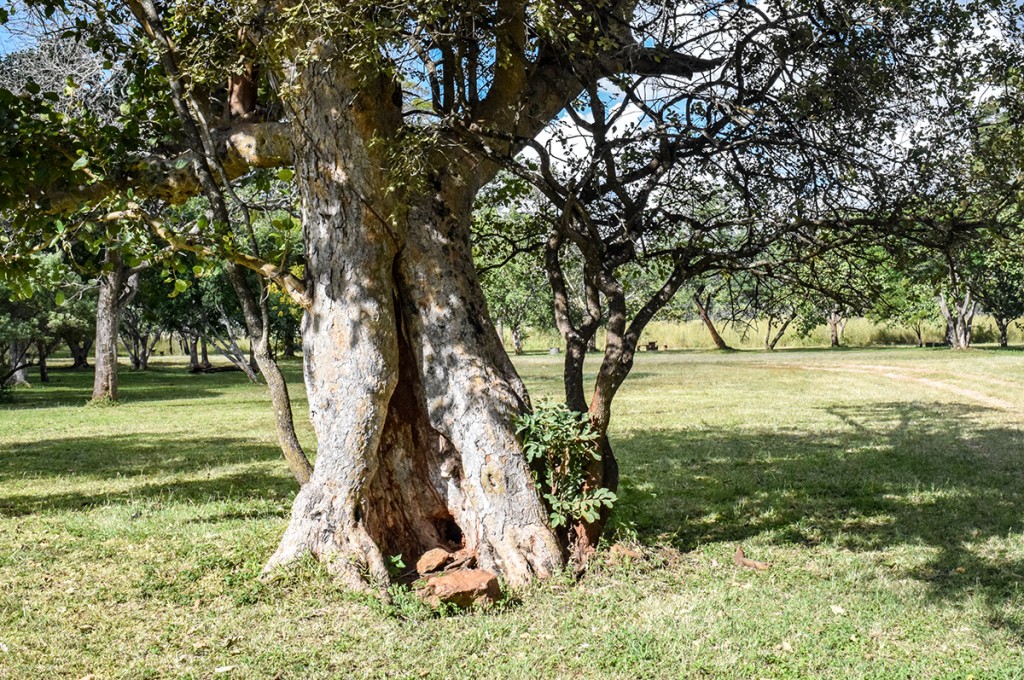 According to Petros Mwera, this fig tree has provided food to people for centuries. He says hungry people would arrive at the tree, clap their hands, and food would appear on a wooden plate. 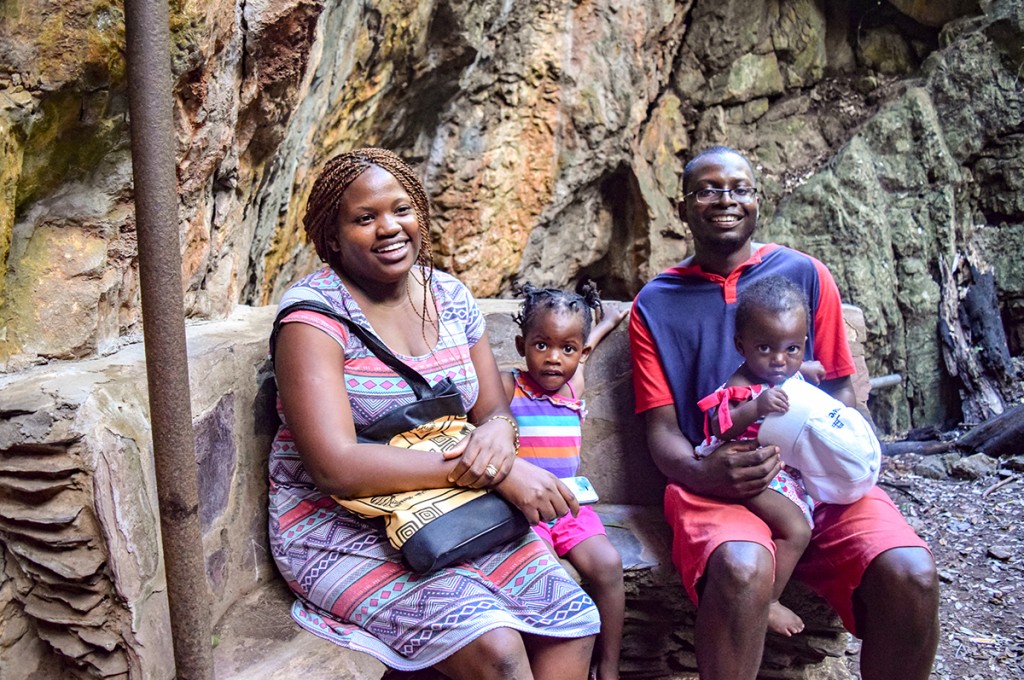 Josephine Mpofu and Amos Mpofu came to Chinhoyi Caves with their children on a detour from Kariba Dam. 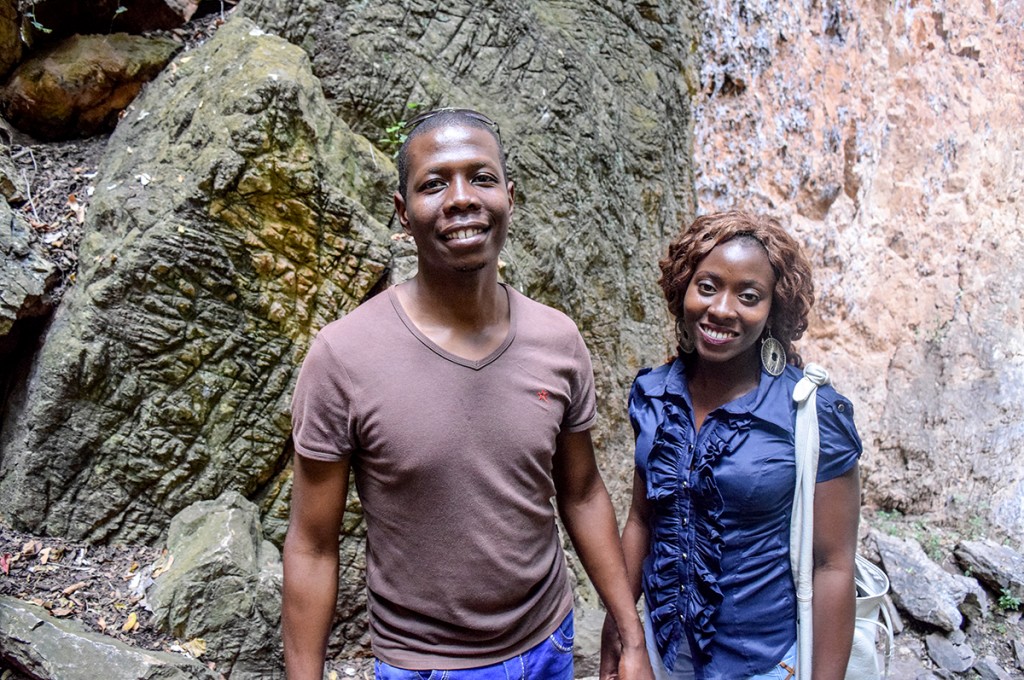 Tendai Mbera says he’s heard stories of the famously blue water in the Sleeping Pool, but this is the first time that he has seen it in person. He traveled with his fiancée Vongai Moyo, to take in the marvels of the Chinhoyi Caves. 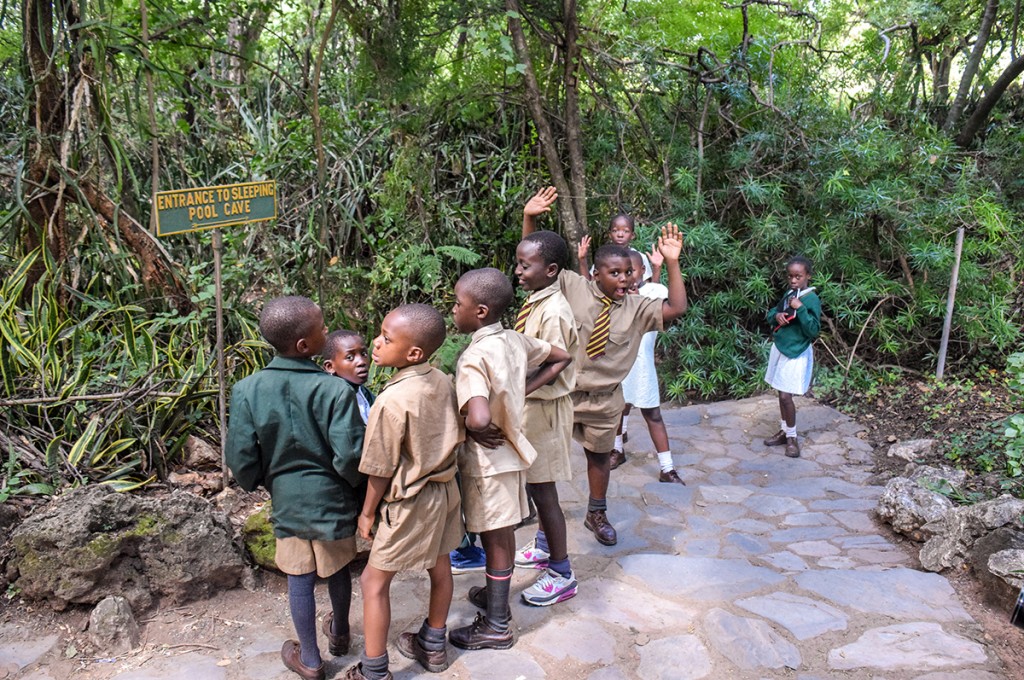 The Chinhoyi Caves are a destination for educational tours. Here, a group of school children stand in front of the sign pointing to the entrance of the Sleeping Pool. They will soon learn of the history of the caves while exploring the natural beauty of the site.

How to Visit the Chinhoyi Caves
The caves are located in Chinhoyi about 123 kilometers (about 76 miles) from Harare along the route to Kariba Dam, another tourist site in Zimbabwe. Anyone who intends to visit the caves can do site booking upon arrival or can visit ZimParks website at www.zimparks.org to book in advance. The Harare central booking office for ZimParks can be contacted through the direct line +263 4 706077/8 or +263 4 707624-9. Entry fee to the caves is $3 per person for local tourists, $8 per person for regional tourists and $10 for international tourists.

Editor’s Note: Some sources in the story are related. 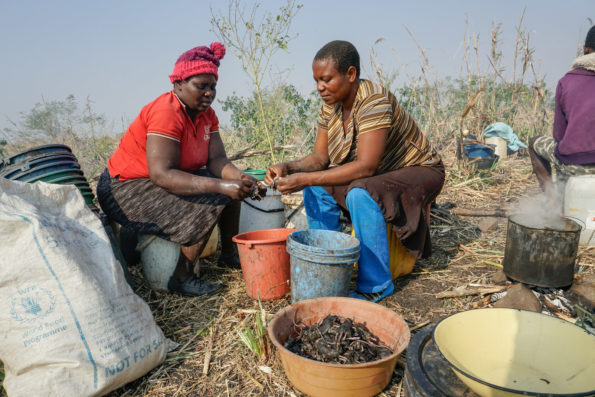 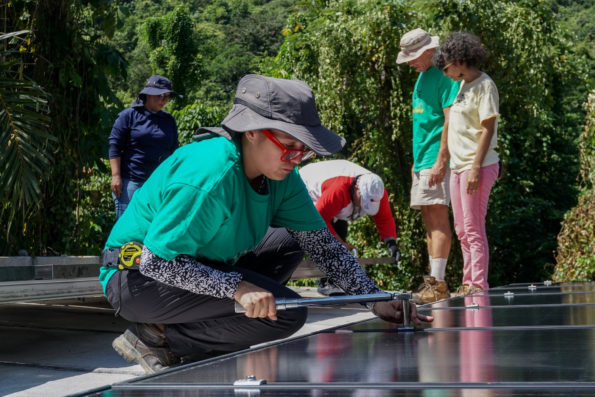 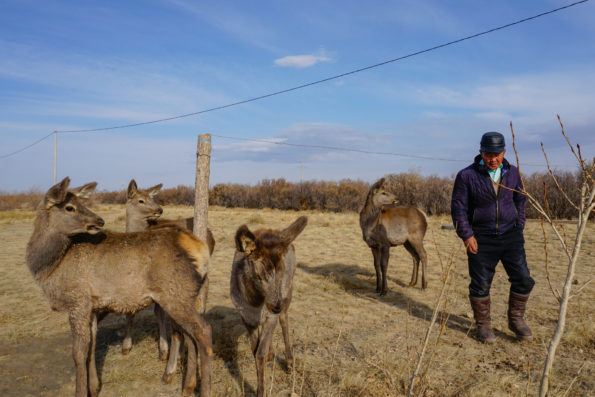