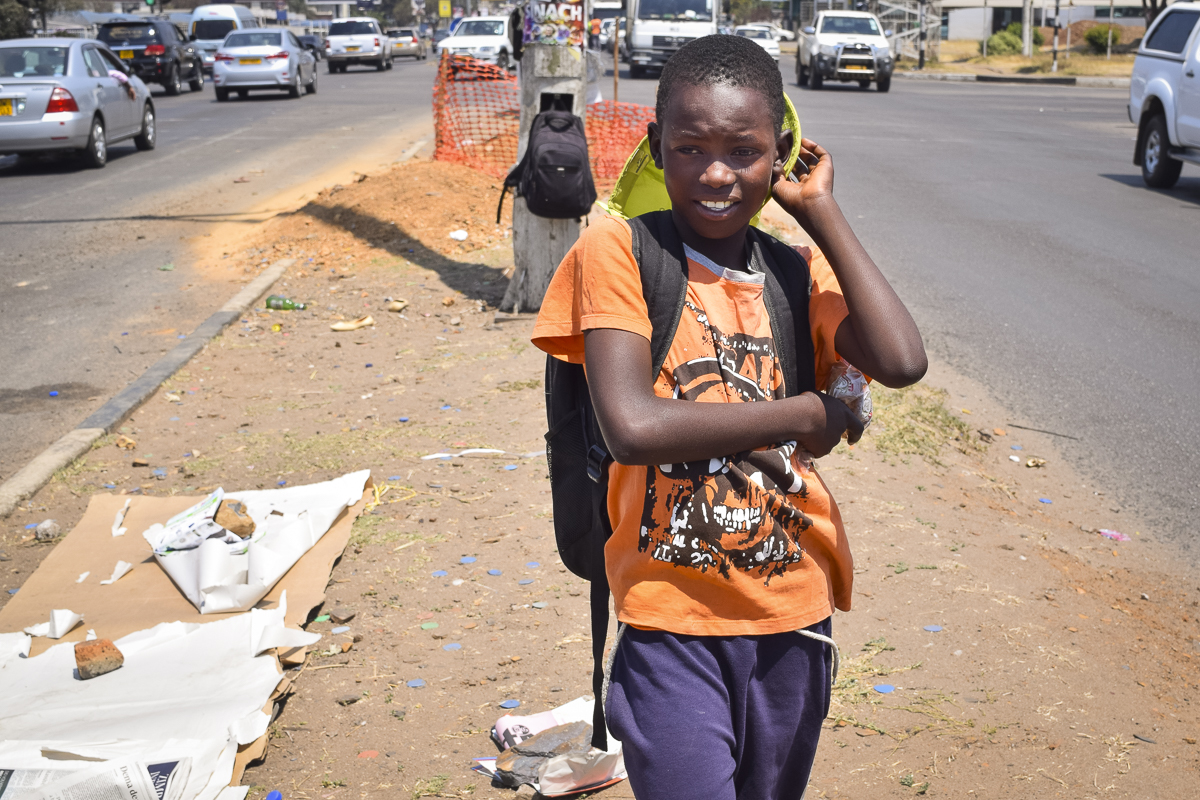 HARARE, ZIMBABWE — Vivian Nyeke, 11, sits on the pavement and stares at the small pile of ginger and garlic in front of her. People pass by, but no one glances down at what she’s selling.

Vivian’s dress is dirty. She hasn’t changed it in days. Her cracked, dry lips reveal that she hasn’t eaten all day, and she had little hope for a meal this evening.

Schools here opened in the second week of September, but Vivian’s family can’t afford to send her. So she sells ginger and garlic.

“My mother said that I should join her in her trade as a vendor so that I raise money for my school fees,” she says.

Life on the street is hard. Men harass her and unhappy customers throw away her wares, which she finds with her mother on the waste piles at Mbare Musika, a local vegetable market.

On a good day, Vivian earns $5. U.S. dollars, the primary currency here. But lately, she’s lucky if she leaves with 50 cents. Usually, it’s nothing at all.

The economic climate here, which has gotten so desperate that the government is addressing a cash shortage by issuing bonds, has forced many children into work as street vendors. Growing unemployment in Zimbabwe, the result of deteriorating economic, social and political climates, is part of a massive decline in investment and weak export performance.

According to a 2014 survey by Zimstats, the Zimbabwe National Statistics Agency, half of all children between the ages of 5 and 17 were engaged in child labor, and 55 percent of these children lived in households where the head earned between $1 and $100 per month.

That number of children engaged in economic activities represents an 8 percent increase since 2011, according to the report.

Theories abound as to why Zimbabwe’s economy is in such turmoil, but many analysts point to government policies such as those that wrested land and businesses from people who weren’t indigenous Zimbabweans. 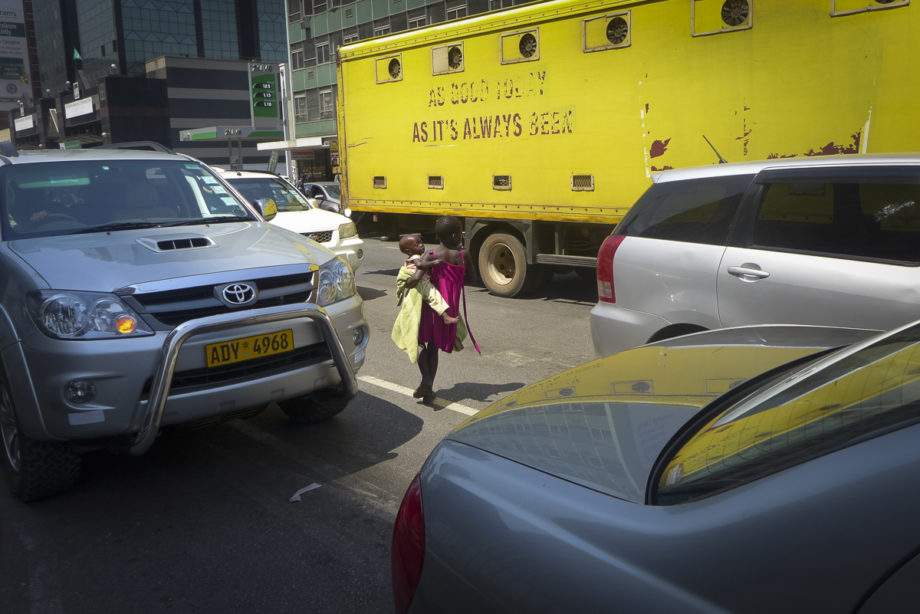 A child, holding a baby, ventures into a Harare street to beg from drivers.

Muyengwa says there is need for a multi-sectoral approach to deal with the problem of child street vendors and beggars. The government alone cannot solve the problem, she says.

But without more recent and accurate data, it is hard to coordinate a meaningful response to the problem, she says.

In a written response to GPJ’s query, an official with Zimbabwe’s Ministry of Public Service, Labour and Social Welfare says the government has taken note of the trend of children vending and begging on the streets and has been providing social protection programs that entail removing children from the streets, finding their families and reunifying them.

According to data provided by a 2014 government survey, 4,701 children were living and working in the streets in Zimbabwe, including 2,050 in Harare, the capital city.

Between January and August, the government removed 78 children from Harare’s streets.

Muyengwa says parents often watch their children beg or sell on the street.

“There [are] usually children begging and vending along Samora Machel Avenue and Leopold Takawira Street, while their parents are watching them from a distance,” Muyengwa says, because many believe children alone are more successful. That viewpoint can lead to corruption, she says.

The ministry says it has set up multi-sectoral task forces to monitor the situation of children living and working on the streets. In May 2016, the task force in Harare facilitated in the arrest of 20 mothers who were using their children to beg on the streets.

Vivian’s mother, Memory Karembera, holds her 20-month-old twins as she describes her family’s situation. Karembera has four children. Vivian is the oldest.

“Vivian has to sell so that we raise money to buy food,” she says.

Karembera says her family’s financial situation deteriorated when her husband, the family’s breadwinner, died in 2006 after suffering from complications related to HIV. They were evicted from their home in 2009 and haven’t had a permanent place to stay since.

Karembera says she knows Vivian faces hardship and abuse, but adds that they have no other choice.

And Vivian is not alone. Perseverance Mateta, a 12-year-old boy, says he is in a similar predicament. He begs at the intersection of Harare’s Samora Machel Avenue and Enterprise Road every day. He was kicked out of school earlier this year because he didn’t pay his fees, he says.

Perseverance says he works 11 hours a day, and on a good day goes home with between $4 and $6. Sometimes his mother, who doesn’t have a job, begs with him on the street.

“I come here to beg because I want to raise money for school fees and for food,” he says.