Skip to main content
The story you are reading was published on Monday October 23, 2017. To read more recent stories click here. 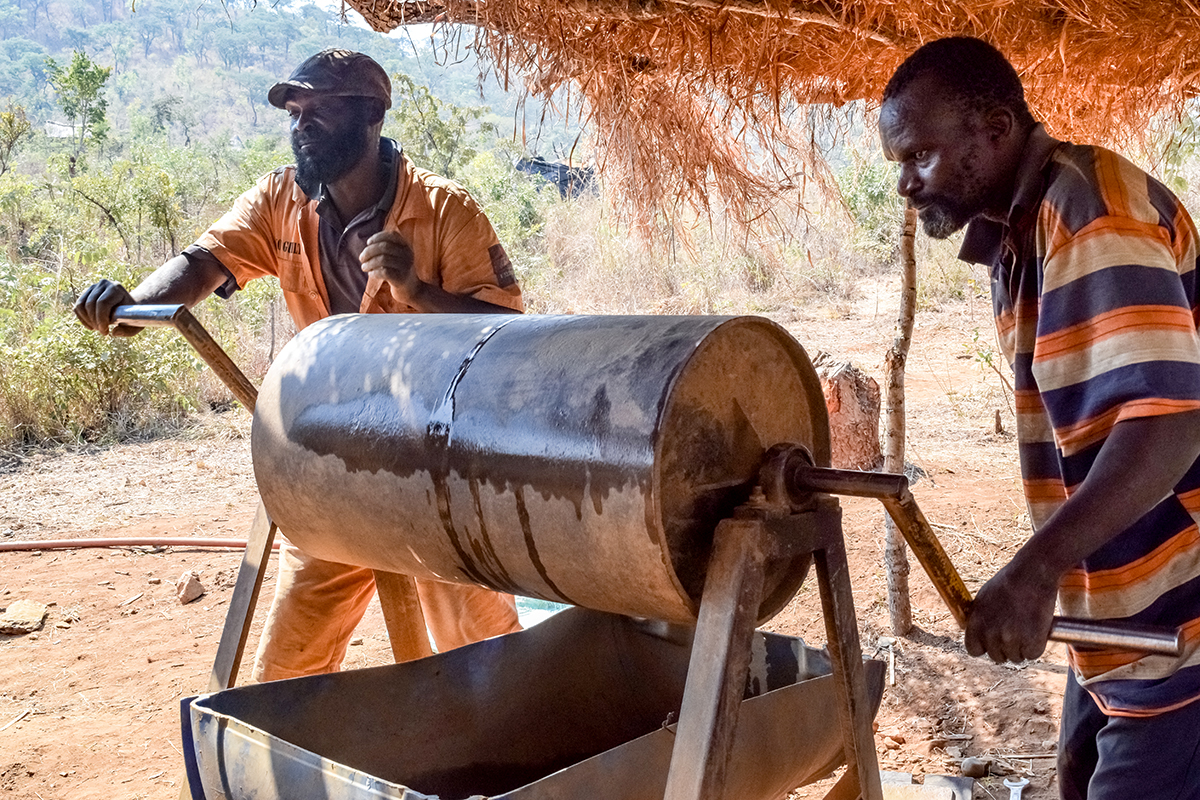 MUKARADZI, MOUNT DARWIN, ZIMBABWE — It’s 2 p.m. and scorching hot, but dozens of men and women are breaking rocks, their bodies covered in dust and sweat.

The ground is perforated with holes and gullies. Called “artisanal miners” because they work alone or in small teams – often without registering as miners with authorities – they dig wherever they think they might find gold, pulling out chunks of stone and smashing them until they have a pile of dust. A miner pours some of the dust into a bowl, then covers it with mercury that he keeps stored in a thin plastic bag.

With bare hands, the miner uses a cloth to squeeze the toxic mercury out of the dust. On a good day, the miner will find a small chunk of gold when he opens the cloth. Then, he’ll burn the gold chunk to remove all traces of the mercury, sending toxic fumes into the environment, often without knowing that mercury exposure can lead to serious illnesses or even death.

“Without mercury, it is difficult to get hold of gold particles as one element,” explains Godfrey Bondera, a miner, as he rushes into a grass hut to burn a chunk of gold. “It is completely safe to use.”

Mercury flows into Zimbabwe from South Africa and other neighboring countries to feed the country’s largely unregulated gold boom. It’s difficult to track mercury imports and exports, especially because no country records mercury purchased in-country for the purpose of gold mining. Much of the mercury trade in southern Africa likely happens across porous borders, with little or no governance. 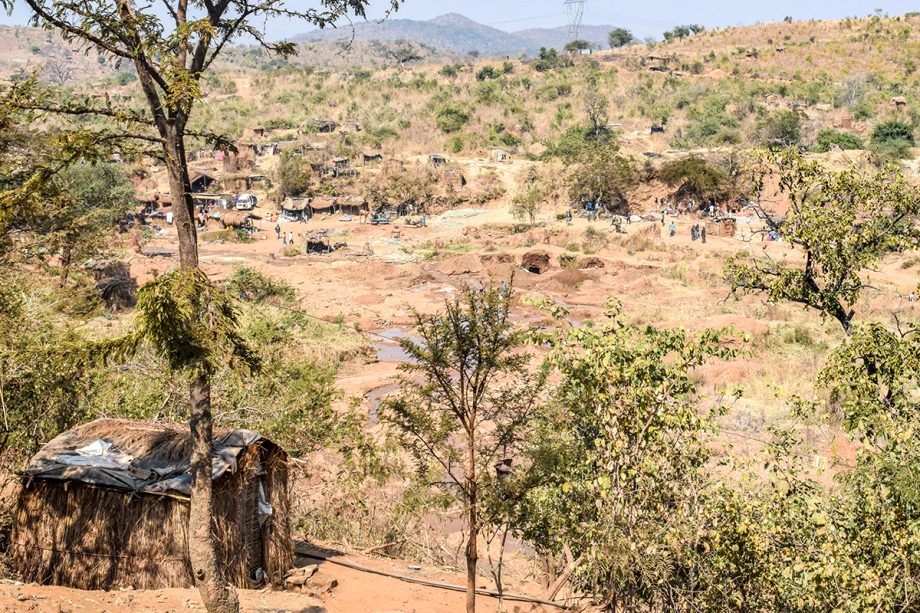 In the Mukaradzi community, gold miners live without running water. Many of the miners use mercury on a daily basis without any protection.

At the Mount Darwin mines, mercury sellers simply show up. Miners make their purchases. No one asks where it comes from.

Mercury is cheap – just $2 per gram (.035 ounce), according to one miner – easy to carry and dead-simple to use. Even children do it.

In fact, as many as two out of every three of Zimbabwe’s miners use mercury, without protection, to extract gold from ore, according to a 2014 study by Pact Zimbabwe. In the process, miners risk damaging their nervous, immune and reproductive systems.

Meanwhile, the government is doing little – if anything – to curb mercury use and instead encourages Zimbabweans to mine gold using any tools or substances they can. Miners are technically supposed to register with the government, but anyone can sell a chunk of gold, of any size, to the government’s gold-buyer, Fidelity Printers and Refiners, no questions asked.

In 2013, Zimbabwe signed the U.N.’s Minamata Convention on Mercury, which calls for governments to protect people and the environment from mercury, but it has not ratified the convention that seeks to abolish mercury use entirely.

Two out of every three of Zimbabwe’s miners use mercury, without protection, to extract gold from ore.

Gold is now a main driver of Zimbabwe’s shell-shocked economy, with artisanal and small-scale miners leading the charge. More than 25 percent of all formally employed people work in the gold industry, according to the Chamber of Mines, a division of the Ministry of Mines and Mining Development. All told, more than 1 million of Zimbabwe’s roughly 16 million people are directly engaged in some form of mining work.

The gold comes at a high price: Many miners suffer serious health consequences. Even the miners who understand the dangers of mercury say they can’t avoid contact with it.

“The water that we use to wash gold using mercury is the same water we use for drinking and cooking,” says Mercy Bungu, a veteran gold miner who has worked throughout Zimbabwe’s gold country. “We have numerous cases of children having [diarrhea] because the water they are drinking is contaminated water.”

The government should dig a well so the miners can have clean water, Bungu says.

The temporary camp in the Mount Darwin area where many of the miners live lacks even basic amenities. Those living there are on the edge of absolute poverty. They wear worn-out clothes that offer no protection from the weather or the conditions they encounter in the mines. Gloves, work suits and helmets are the stuff of dreams.

That frustrates local doctors, who see patients suffering from contact with chemicals and other substances. 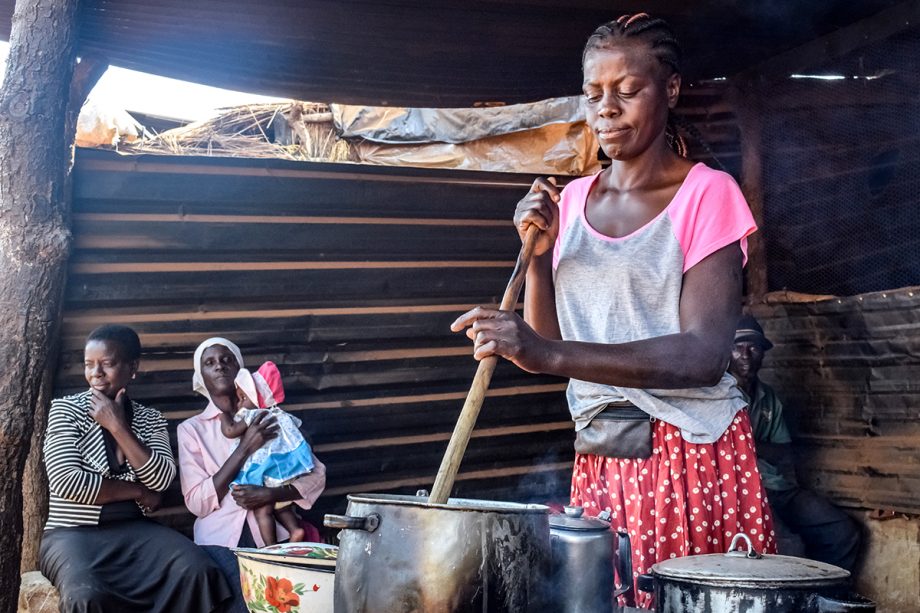 Mercy Bungu cooks at her outdoor canteen using water that she believes is contaminated with mercury. Mercury is widely used by artisanal gold miners in Zimbabwe.

Dr. Gerald Gwinji, permanent secretary in Zimbabwe’s Ministry of Health and Child Care, says the government is aware of people who have been treated for health issues related to mercury. It’s inherently dangerous to use, he says, but he offers recommendations for people who need to: “Use it very carefully. Do not spill it or inhale it and use it in the appropriate stages, containers and store it in the appropriate storage facilities.”

Despite the government’s push for small-scale gold production and Gwinji’s acknowledgment of the problem, there have been no formal, government-sponsored trainings to educate miners on the dangers of mercury.

Norman Mukwakwami, a project leader for the Zimbabwe Accountability and Artisanal Mining Program at Pact, a nonprofit based in Washington, DC, says miners often can’t differentiate the symptoms of mercury poisoning from other diseases. Mental illness, miscarriage, male impotence, tremors and tooth decay are all problems that stem from contact with mercury.

Mukwakwami says his organization has hosted two mercury safety trainings for about 300 miners, as well as two meetings to discuss the Minamata Convention. About 60 people participated, he says.

But most miners plan to continue using mercury.

Oliver Mabhodho began mining for gold a year ago, after he retired from the army. He works in a mine that is 15 meters (49 feet) deep and 45 meters (148 feet) long. The mine hasn’t been inspected by anyone, but he believes it’s safe.

“During winter we sleep in the mine because it’s warm,” he says.

Life is hard, he says, but the potential payoff lures him to keep on. In February, he found 67 grams (2.3 ounces) of gold, which he sold for $37 per gram – a fortune of more than $2,400 in a country where cash is scarce and hunger is rampant.

“There is no alternative,” he says.