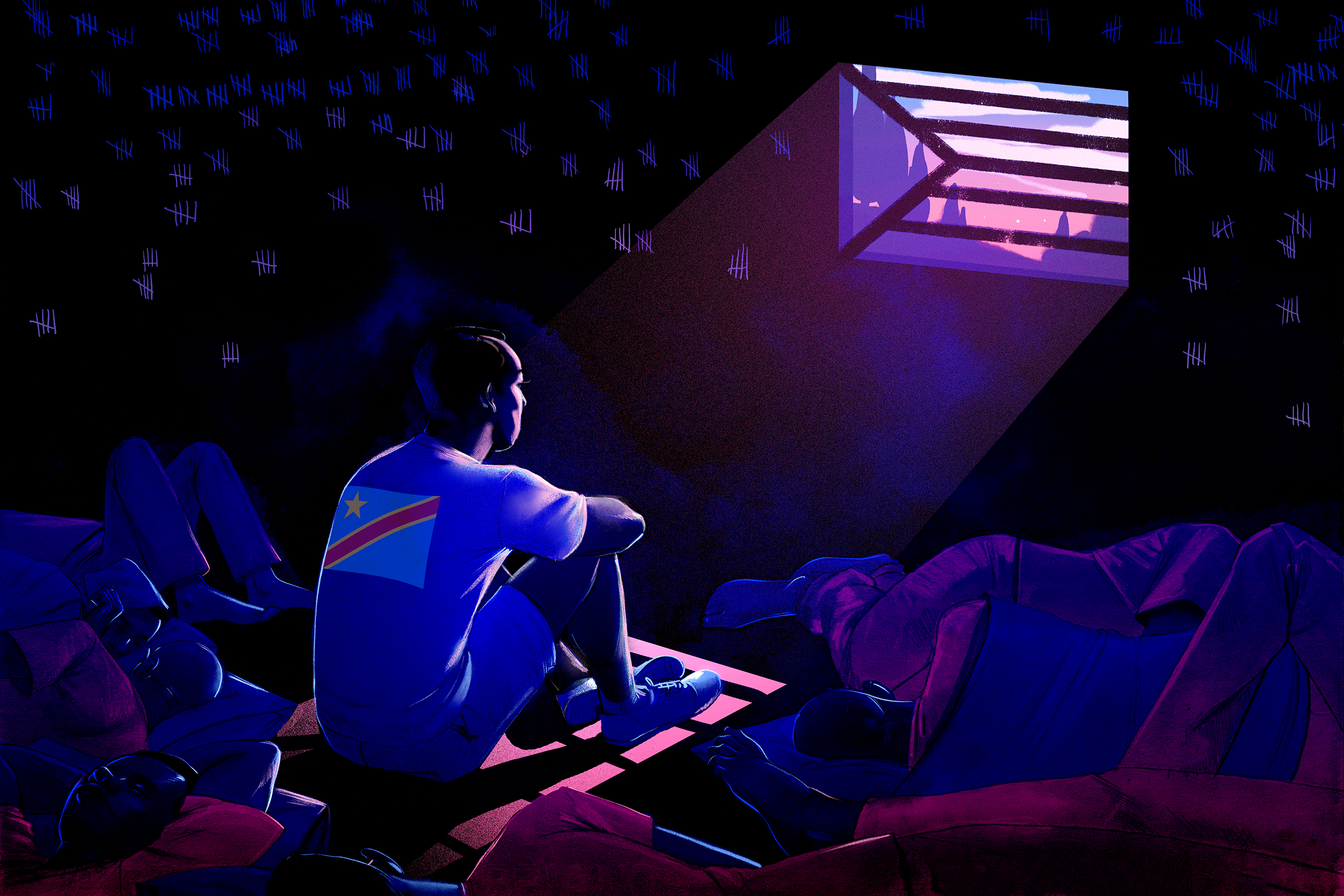 Kalala, 30, wore his own T-shirt and khaki trousers instead of the red-and-white-striped shirts and white shorts of his cellmates. That’s because Kalala was an undocumented migrant, not a prisoner. He was held at the prison not because the government planned to prosecute him but because Zimbabwe has nowhere else to put him and no money to deport him.

Government officials say they would like to put people like Kalala – a citizen of Democratic Republic of Congo – in a migrant detention center to await deportation. But Zimbabwe has no such centers.

The penalty for entering Zimbabwe illegally is deportation or up to one year in prison, according to the International Organization for Migration. The government is supposed to hold migrants temporarily until they can be sent back to their home country, but undocumented people like Kalala often end up in local prisons for years without prosecution or deportation because Zimbabwe lacks both the policies and resources to manage illegal immigration.

Kalala fled DRC after an armed group attacked his village in 2018. The group kidnapped villagers and set fire to their homes, so he decided to get as far away from DRC as possible. He traveled – mostly by foot – to Zambia and lived there briefly before crossing the border into Zimbabwe near Victoria Falls.

After traveling some 1,400 kilometers (900 miles), he ended up in Bulawayo, Zimbabwe’s second largest city.

Kalala says Zimbabwean police caught him in Bulawayo without a passport in November 2018. They held him in a local jail for two months, then transferred him, first to a prison in Harare and then to Mutare Remand Prison, where he remained for seven months. He was never charged with or convicted of any crime.

It’s too dangerous for him to return to DRC, he says, so he applied for asylum in Zimbabwe. Shortly after he spoke to Global Press Journal, he was moved to a refugee camp in the eastern Zimbabwe town of Chipinge.

Zimbabwe’s immigration laws require all migrants to possess adequate documents, such as passports and permits, and to adhere to a duration of stay stipulated by immigration officers. The laws allow officers to arrest anyone they suspect of staying in the country illegally and hold them for up to 14 days to confirm that they do not have the required permits. There is no limit to how long they can be held after officials have verified that they do not have documentation.

While officials do not know the current number of migrants in Zimbabwe, there were about 361,000 migrants in the country in 2013, according to the most recent data from Zimbabwe’s statistics agency. That’s down from 409,013 in 2000 and 626,821 in 1990, although the decrease apparently hasn’t eased the strain on the government or improved conditions for detained migrants.

Following a 2018 meeting of the African Union in Ethiopia, 32 countries, including Zimbabwe, signed a protocol to work toward the creation of an African passport. It would operate with the EU as a model. Zimbabwe is not among the countries who have ratified the protocol.

There is no official count of how many undocumented migrants are held in local prisons here.

Meya Khanyezi, chief correctional officer and spokesperson for the Zimbabwe Prisons and Correctional Service, says 96 migrants are in custody at Harare Remand Prison, where she is based. She says each prison keeps their own data. No one from Mutare Remand Prison responded to inquiries about the number of migrants held there.

“The prohibited immigrants are ready for deportation and only awaiting for [the] immigration department through Home Affairs to have them deported, if resources permit,” she says.

But it’s more complicated than waiting for paperwork.

As Zimbabwe’s economic crisis deepens, there are few resources available to offer translators or plane tickets to migrants awaiting deportation.

Those caught entering the country illegally are supposed to be quickly deported, but this does not happen as often as it should, says Kudakwashe Dorothy Mutsimbi, law officer with ZPCS. In the interim, prisons are the best option, she says.

Mutsimbi says most correctional facilities struggle to provide even basic necessities like food, toiletries and clothing.

Occasionally an embassy will provide plane fare, she says, adding that most of the migrants held in the country come from DRC or Mozambique. Neither embassy responded to multiple requests for comment.

Khanyezi agrees prisons are the best option to provide for the migrants.

“Prohibited immigrants require medicine, food, and clothing and bedding,” she says in a written response to Global Press Journal. “As a result, it strains government expenditure since they are not on [the] ZPCS budget. However, it is the mandate of the government of Zimbabwe to feed every prisoner regardless of the type of offense or country of originality.”

“Some do not want to go back because of various reasons, such as political crimes, economic hardships and war in their countries” she says. “So, some have been in prison for years.”

Miguel Manuere Zhuwao, 25, and Dickson Dick Matsana, both shoe traders from Mozambique, crossed into Zimbabwe with goals for a better life, despite the country’s economic situation.

Zhuwao says he now regrets that decision. He’s been in prison for more than two months, after immigration officers caught him without documentation.

“Being in prison is hard, and all I want is to have the papers processed, so I can go back home,” he says.

The situation is different for Matsana. He says his deportation process has not yet started.

Language barriers present some of the biggest hurdles. “We get Mozambicans, Malawians in transit and at times some from DRC who do not speak English.” says Kakoto. “We at times get some prisoners who can translate for us, but in the absence of that, it is a real challenge.” If they can’t find someone, they have to wait until an interpreter is provided, which adds to the delay.

Mutsimbi warns the situation is worsening and requires multinational attention.

“We are already overstretched in terms of resources,” she says. “We are treating them like criminals when we need detention centers.”

Some interviews were translated from Shona to English.